Methods: The descriptive cross-sectional study was conducted from March 1, 2019, to February 1, 2020, in the city of Mardin, Turkey, and comprised primary healthcare workers.  Data was collected using a questionnaire about socio-demographic characteristics and the Turkish version of the Intercultural Sensitivity Scale. Data was analysed using SPSS 24 software version.

Results: Of the 150 subjects approached, 131(87.3%) volunteered to participate. Of them, 80(61%) were females and 51(39%) were males. The largest age group was 25-34 years having 77(59%) subjects. The total mean score of the intercultural sensitivity scale was 73.30±16.7. There was a strong relationship between the subscales of ‘Responsibility and Interaction Attentiveness’ and ‘Respect for Cultural Differences’ (p<0.01). Significant difference was found between the sensitivity levels and the job titles of the participants, their status of friendship in different countries, the opportunity to be with people in other cultures for any reason, the status of willingness to work in different cultures and their intercultural sensitivity scale scores (p<0.05).

Conclusions: The level of cultural sensitivity of the healthcare professionals was overall moderate.

Culture is defined as the set of values, beliefs, attitudes, behaviours, customs and traditions that are learned, shared and passed down from generation to generation by a group of people.1 Culture is everything that man creates in response to what nature has created.2

In today's world, interrelated concepts, such as multiculturalism, identity, diversity, otherness and globalisation, have become important subjects discussed in different aspects, both scientifically and politically, among the public.3

In addition, rapid developments in communication and transportation technologies have increased the interaction between societies and individuals. These changes and developments at national and international levels have emphasised the concept of ‘intercultural communication’, thus increasing the need for individuals who recognise, understand and empathise with other individuals from different cultures.4

In today’s multicultural and globalising societies, there is a great deal of interest towards intercultural sensitivity, which is an important element of intercultural communication skills and is defined as "having an active desire to provide one’s motivation to understand, accept and appreciate intercultural differences". Interculturally sensitive people have a point of view that prioritises universal values in individualist-socialist environments.7

Intercultural sensitivity is expressed as an individual's sensitivity to others and the cultures presented in interaction, and as an understanding of the worldview of others.8

In the 21st century, the awareness towards beliefs, values, religion, language and other cultural and socio-economic factors affecting health promotion and help-seeking behaviours have increased among aspiring health professionals, and in recent years, culture-sensitive care has become one of the most important qualifications that graduate students are supposed to possess for professional health applications.13

There is a sufficient number of studies on the education of healthcare professionals regarding cultural care, but culturally sensitive care has not been applied enough.2,14,15 It has been stated that culturally important aspects are generally neglected in the provision of healthcare. Moreover, cultural issues are usually not emphasised when devising training programmes for healthcare workers (HCWs) and clinical study guides.2 On the other hand, the use of cultural models and guides is beneficial to HCWs in evaluating the cultural characteristics of the community they care for, obtaining cultural data in more systematic and standardised ways, and increasing their intercultural knowledge. Culturally appropriate care also requires HCWs to be individually informed and sensitive about cultural differences and similarities. To achieve this goal, a framework of competencies should be developed to provide cultural competence in the training of HCWs in orer to ensure that primary healthcare professionals are able to provide intercultural sensitive care to people with different ethnic backgrounds. The current study was planned to examine intercultural sensitivity levels and related factors of primary HCWs providing care to a variety of socio-ethnic groups.

The descriptive cross-sectional study was conducted from March 1, 2019, to February 1, 2020, in the city of Mardin, Turkey. Mardin, located in southeastern Turkey, plays host to different socio-ethnic groups because of migrants from strife-torn Syria. After approval from the Non-Interventional Researches Ethics Review Committee of the Mardin Artuklu University, the sample was raised without using any sampling method as all healthcare workers were approached in line with the full count method.

The sample comprised all primary HCWs, including doctors, nurses, midwives, and others, working at the family health centre for at least the preceding six months and who were present at the time of data-collection. Those who were on leave or not willing to participate were excluded.

Data was collected after taking verbal informed consent from the volunteers.

Data was collected through face-to-face interviews using a questionnaire with the help of nursing students of the Faculty of Health Sciences of Mardin Artuklu University. The questionnaire form had two sections. The first section comprised a predesigned sheet with 20 open-ended and multiple choice questions (MCQs) targeting the socio-demographic characteristics of the subjects. The second section comprised 24-item Intercultural Sensitivity Scale,16 which has been shown to be a psychometrically valid and reliable tool translated into Turkish.4

The scale has five emotional subscales explaining the aspects of intercultural sensitivity. The interaction engagement subscale consists of seven items (items 1, 11, 13, 21, 22, 23 and 24). The respect for cultural differences subscale includes six items (items 2, 7, 8, 16, 18 and 20). The interaction confidence subscale includes five items (items 3, 4, 5, 6 and 10). The interaction enjoyment subscale contains three items (items 9, 12 and 15), and the interaction attentiveness subscale has three items (items 14, 17, and 19). Also, items 2, 4, 7, 9, 12, 15, 18, 20 and 22 of the scale are reversely evaluated. The scale is scored using a 5-point Likert rating, ranging from 1 = strongly disagree, to 5 = strongly agree. The lowest total score that can be obtained from the scale is 24, while the highest total score is 120. A score of 72 points is considered sufficient. The scale does not have any cut-off points. Higher total scores indicate higher levels of intercultural sensitivity.4

Mean total score of the sample on the Intercultural Sensitivity Scale was 73.35±16.74. Subscale mean scores were also computed (Table 2). 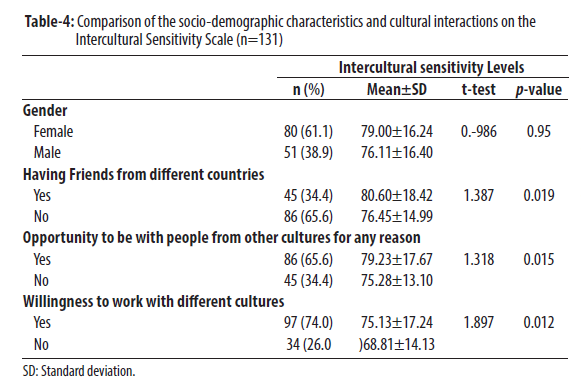 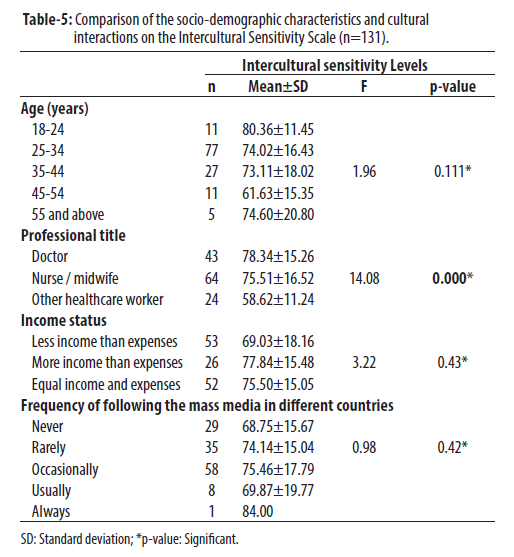 The present study was carried out in a city that has a multicultural environment and consists of individuals of many different ethnic backgrounds.

The current study also conducted correlation tests to assess the relationships between various variables. The findings were similar to those reported earlier.3,6,18 Based on these findings, it can be suggested that those who interact with other cultures and have a positive perception of this subject have a higher level of intercultural sensitivity.

According to one study,3 a significant difference in intercultural sensitivity in communication was noted in those knowing a foreign language.3 However, this difference was not statistically significant in the current study. The reason for the absence of this expected relationship in the present study could be attributed to the fact that the city where the study was carried out has a multicultural and multilingual environment and there is a direct and indirect intercultural experience.

The study findings indicate the importance of addressing intercultural sensitivity, which is an important dimension of intercultural communication for HCWs to provide culturally adequate care to individuals from different cultures.

The current study is one of the very few studies conducted to determine the level of intercultural sensitivity in Turkey. Similar studies with individuals from different socioeconomic backgrounds living in different regions of Turkey with larger samples are recommended. Future studies shall explore the impact of other dimensions to better understand the nature of being fully competent in the context of intercultural sensitivity.

The level of cultural sensitivity of the healthcare professionals working in primary care was found to be moderate.

Acknowledgements: The authors would like to thank the 4th grade Nursing Department students of the Faculty of Health Sciences of Mardin Artuklu University for their help in data collection and the district health director. This article has not been submitted anywhere before.

6.      Yılmaz F, Göçen S. Investigation of the prospective primary teachers’ intercultural sensitivity levels in of certain variables, Adiyaman Journal of the Institute of Social Sciences of the University. 2013; 6: 373-92.