The effects of whole body vibration on gait after chronic stroke: A Randomized Controlled Clinical Trial

Objective:  To determine the effects of whole body vibration therapy on gait in chronic stroke patients.

Methods: The randomised, assessor-blinded, controlled clinical study was conducted at the Physiotherapy Department, Lahore General Hospital, Lahore, Pakistan, from November 2017 to April 2019, and comprised chronic stroke patients wh were randomly divided into two equal groups, with group A reciving routine physiotherapy and group B reciving whole-body vibration therapy. Both the groups received 12 sessions each. Vibration therapy was given with an amplitude of 3mm and frequency of 20Hz. Sessions comprised 5 bouts of 120 seconds with 60s rest intervals for 6 days/week for 2 weeks in erect standing position. The outcome measure was the score of timed up and go test and 10-meter walk test before and after intervention. Data was analysed using SPSS 21.

Results: Of the 64 patients, there were 32(50%) in each of the two groups. Significant difference was seen post-intervention in both the groups (p<0.05) although both groups were statistically same in terms of Timed Up and go Test, 10 Meter walk Test Slow Speed and 10 Meter walk Test Fast Speed (p>0.05).

Impaired walking performance due to neurological deficit is common in stroke survivors.1 It affects the capacity of stroke survivors to walk on smooth and rough surfaces. Mobility of stroke survivors is normally affected due to loss of coordination and control of complex movements, resulting in poor performance in activities of daily living, especially ambulation and walk.2 Inability to initiate and maintain control during walk makes them dependent and functionally disabled. The main focus in rehabilitation is to improve the strength and motor control of the affected extremities to increase walking capacity.

Previous studies assessed the effect of whole-body vibration (WBV) on mobility and found no significant differences in long-term outcomes WBV and control groups, but a systematic review concluded that vertical WBV could significantly improve mobility compared to horizontal vibration.7,8 Previous studies suggested that WBV of different durations and intensities had beneficial effect on improving gait performance compared to the controls.9-13 Four studies assessed the effect of WBV on mobility using 10-meter walk test (10MWT), 6 MWT and the Rivermead Mobility Index (RMI). No significant differences were observed in terms of long-term outcomes compared to the control groups.9-11,14 Thus far, there is controversy regarding WBC effects. The epidemiology, stroke-related morbidity and mortality in Pakistan is different from Western countries due to fundamental differences in diet, lifestyle, environment and physique.15-17

To the best of our knowledge, no study has yet determined the effect of WBV therapy in terms of improving the walking speed and gait initiation in chronic stroke patients in Pakistan. The current study was planned to determine the effects of WBV on functional mobility, especially walking speed and mobility, in chronic stroke survivors. It was hypothesised that WBV therapy might exhibit a better response compared to routine physiotherapy (RP).

The randomised, assessor-blinded, controlled clinical study was conducted at the Physiotherapy Department of the Lahore General Hospital, Lahore, Pakistan, from November 2017 to April 2019. The sample size18 was calculated using values in light of a previous study.19 The sample was raised using convenience sampling20 method. Those included were patients of either gender aged 40-75 years and having chronic stroke with a minimum period of 6 months. The subjects had to be medically stable with the ability to stand independently with or without aids for at least 20 minutes, and to perform WBV independently. Those excluded were patients of acute thrombotic diseases, severe cardiovascular diseases, having pacemakers, multiple sclerosis, acute hernia, Parkinson’s disease, tumours, peripheral neuropathy or migraine, epilepsy, osteoarthritis, rheumatoid arthritis and spondylitis. Non-cooperative patients were also excluded.

After taking informed consent from the subjects, they were randomised using the computer number generator method into two equal groups RP and WBV groups.

Participants of both the groups received conventional stroke rehabilitation programme, which includes stretching exercises, strengthening exercises, balancing exercises and gait training. The WBV group additionally received WBV therapy sessions. The WBV therapy was given on a WBV device (Crazy Fit Massage) in erect standing position with a frequency of 20Hz in sessions of 5 bouts of 2 minutes duration with 1-minute break after each bout for 6 days/week for two weeks. The participants stood upright with hands on the handrails on the WBV platform for effective transmission of vibrations up to the trunk level. Monitoring of adverse events and subjective feelings was done by an experienced physical therapist throughout the sessions for both the groups. No adverse event was observed during the sessions.

The patients were evaluated at baseline and post-intervention by an assessor who was an experienced  physiotherapist blinded to the allocation process. Age, gender, side of hemiplegia, duration of stroke, type of stroke and other medical conditions were recorded. Primary outcome measure was score of timed up and go (TUG) test, and secondary outcome measure was 10-meter walk test (10MWT) with self-selected speed (SS) and at fast speed (FS). Time was recorded with a stopwatch and the entire activity was carried out under the supervision of a physiotherapist who monitored the patients without providing assistance. Ethical approval of the study was taken from the Institutional Review Board of University of Lahore. Data was analysed by chi-square test, independent sample t-test and paired sample t-test using SPSS 21. 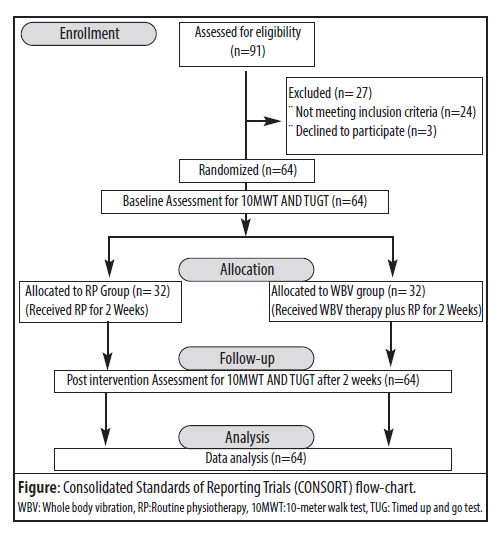 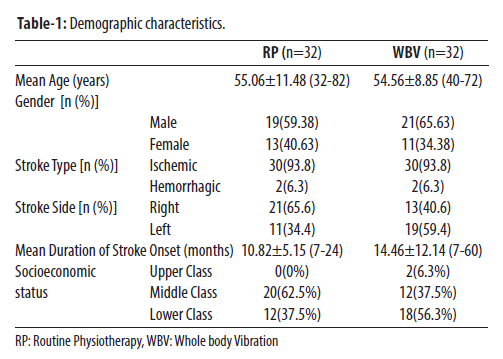 Post-intervention there was significant difference in TUG, 10MWT-SS and 10MWT-FS score for both treatment groups (p<0.001). Patients of both groups were statistically same in terms of Timed Up and go Test, 10 Meter walk Test Slow Speed and 10 Meter walk Test Fast Speed (p>0.05) (Table 2). 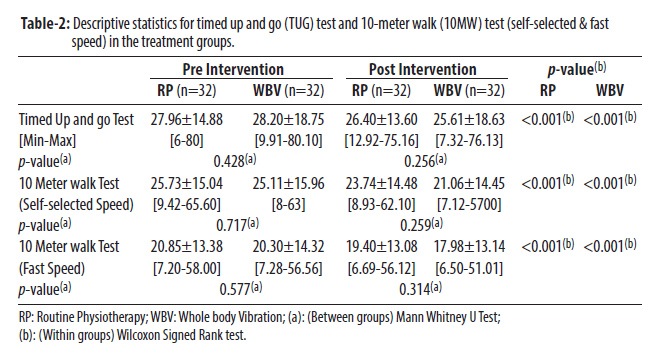 The results of the present study suggest that WBV has no beneficial effect on gait initiation and ambulation in stroke survivors. The effect was significant in both control and experimental groups showing both treatment regimens were equally effective. Effect of WBV on stroke patients was examined in seven studies (n=21 to n=84) with participants of mean age 58.3±4.5 years.9,11,14,21-24 In the present study, 64 patients were considered with a mean age 55.0±9.3 years. Duration of training varied in all the above studies from 4 to 8 weeks. In the present study the duration was 2 weeks which is cost-effective and time-saving but it revealed that shorter duration of vibration therapy has no beneficial effects. The subjects performed three sessions/week in four studies,11,21,22,24 five sessions/week in two studies14,23 and two sessions/week in one study.9 However, in the present study, 6 sessions/week were given to the patients, indicating that even more intense vibration training cannot give better results. In previous studies, amplitude of platform vibrations and frequency used ranged from 0.44 to 5mm and from 20 to 40Hz respectively.9,11,14,21-24 In the present study, 3mm amplitude and 20Hz frequency were used. In two studies, intensity i.e. amplitude and frequency, of vibrations was progressively increased during the treatment sessions.11,22 In the present study, the intensity of treatment was kept constant during all the sessions. Side-alternating vibrations14,22,23 and synchronous vibrations,9,11,24 were used in six studies, while one study did not mention the type of vibrations.21 In the present study, side-alternating vibrations were used to treat the patients, and it remained beneficial which might be due to better transmission of side-alternating vibrations to the abductors of hip in chronic stroke patients. Results in the present study can be reconciled by postulating that combination of erect standing, intense vibration training and better exercise programme have not improved proprioception and agility compared to control group.25 Augmented response of antigravity muscles due to strengthening exrcises is expected to be a contributing factor behind  the improved walking speed of the patients in both groups.

Four studies assessed the effect of WBV on mobility and found no significant differences between long-term outcomes in WBV and control groups.9-11,24 The present study found similar result in stroke survivors. Better exercise protocol for experimental and control groups might be the reason behind improvement in both groups. Primary muscle spindle endings of antigravity muscles gets stimulated through vibrations, causing Ia afferent impulses to be conducted to Ia-inhibitory interneurons and alpha motor neurons in the spinal cord. This afferent pathway produces involuntary contraction in the vibrated muscle, called the tonic vibration reflex (TVR), and inhibits the antagonist muscle. Vibratory stimulation is therefore traditionally applied to the antagonist of the spastic muscle in order to decrease the spasticity of a hemiplegic limb.26 A study reported that although experimental and control groups were statistically different (p<0.001) at pre-interventional level for 10MWT, a significant improvement in favour of the WBV group (p<0.001) was observed.21 Similarly, the present study used similar outcome measures, i.e. TUG test and 10MWT, to determine the mobility level of chronic stroke patients and found beneficial effects. A study used treadmill training in combination with WBV and observed no significant difference between the groups for walking speed and stride length after WBV.22 The present study found improvement in both slow and fast speed in 10MWT, resulting in better mobility level of chronic stroke survivors, and showing that exercises might give better results than the treadmill. Another study observed significant difference and improvement after visual control WBV in squat posture for the TUG test.23 In the current study, WBV failed to improve gait initiation in stroke survivors even in standing posture, which show that posture is a key deciding factor in improvement. One study found that both low frequency (20Hz) and high frequency (30Hz) WBV produced no beneficial effect.24 Similarly the present study (20Hz frequency) showed that WBV therapy with even more intense regimen could not improve the ambulation speed and mobility in stroke patients.

A meta analysis of high-quality studies concluded that there was no significant difference between the groups after WBV on TUG and 6 MWT. Thus, a strong level of evidence negates the beneficial effect of WBV training on TUG test in stroke patients.27 The present study supports the results of this meta analysis and denies the auxiliary effect of WBV in improving mobility of stroke survivors.

The current study has some limitations. The participants were taking medicines from different clinicians so homogenous pharmacological status was difficult to attain. Also, assessment was done on smooth surface in the Physiotherapy Department. Further studies should be carried out to assess the mobility of stroke patients after vibration therapy on outdoor walking on irregular surfaces.

Disclaimer: The text is based on a PhD in Physical Therapy (PhD-PT) thesis.

Effects of tibiofemoral mobilization in patients of Patellofemoral pain syndrome