Objective: To compare the analgesic effects of gabapentin and paracetamol post-operatively in patients with hand injury.

Methods: The double-blind, randomised control trial was conducted at the Department of Plastic Surgery, Dow University of Health Sciences, Karachi, from March to August 2019, and comprised subjects aged 18-60 years with hand injury who were randomly divided into group I which received gabapentin 600mg and group II which received paracetamol 1000 mg through anonymous packaging. Pain intensity was assessed using the visual analogue scale along with a self-designed questionnaire which was filled twice post-operatively; first at the time of drug intake once orally allowed; and thereafter six hours later. Data was analysed using SPSS 22.

Conclusion: Both gabapentin and paracetamol were found to be effective in pain management, but the latter had slightly better pain control with relatively less side-effects.

Pain is an unpleasant sensation / distressful feeling caused by noxious stimuli, which may be intense having detrimental effects. Acute pain may be postsurgical, secondary to bone fracture, or pain during the healing process, while pain due to malignancy, phantom limb or peripheral neuropathy are persistent and are categorised as chronic pain.1 Almost 10% of trauma cases report to the emergency departments (EDs) with hand injuries ranging from minor laceration to badly damaged hands requiring effective management and may hamper an individual’s life depending upon its severity.2 About 80% of patients experience acute pain after surgery which has a major effect on recovery from a surgery.3 Hence, pain relief is one of the critical markers to evaluate the success of a surgery.

Various analgesic regimens are nowadays adopted to relieve pain of any intensity, i.e. from mild to moderate and severe, including opioids, non-steroidal anti-inflammatory drugs (NSAIDs), paracetamol and corticosteroids.4 There are several adverse effects of insufficient or excessive use of opioid and non-opioid analgesics following various surgeries.5 Gabapentin, a novel drug widely used for treating seizures and pain, having a unique mode of action than other analgesics, acts by lowering the dorsal horn neuron’s ability to excite.6,7  It is also used in treating diabetic neuropathy, neuralgia, reflex sympathetic dystrophy, sleep disorders, migraine and alcohol withdrawal.8 The efficacy depends on dosage and variable use, i.e. either preoperatively, postoperatively in various surgeries, including coronary bypass surgery, lumbar spine surgery, hysterectomy, etc.4 Another well-known analgesic as well as anti-pyretic regimen available for many years is paracetamol. Its efficacy may depend on its route of administration, either orally or parentally. It is used as an anti-pyretic widely, while its effect as analgesic has been a focus of consideration for many clinicians for a number of years.9 Clinical practice necessitates investigating the methods which could effectively reduce the intensity of pain. Gabapentin has well known analgesic effects similar to paracetamol in different surgeries, but there is limited data to demonstrate its effects on hand surgery. The current surgery was planned to compare the analgesic effects of gabapentin and paracetamol post-operatively in patients with hand injury.

After approval from the DUHS ethics review board, the RCT was registered prior to patient enrollment at clinicaltrials.gov with RCT registration no. NCT04068506. The sample size was calculated using OpenEpi10 calculator with 95% confidence interval (CI) and 5% confidence level (CL). Different parameters like mean and standard deviations (SDs) for effect after 6 hours were used to calculate the valid sample size. There were no interim analysis considering the limited follow-up time and very limited participant number.  The sample was raised using consecutive sampling technique from among patients of either gender aged 18-60 years with hand injury. Those excluded were pregnant women, patients presenting with signs of arrhythmia, myocardial ischaemia, cognitive impairment, psychiatric disorders, drug abuse, patients taking any anti-epileptic drug, and those having severe and multiple injuries.

After taking informed consent, the subjects were randomised into experimental group I and control group II with 1:1 allocation ratio which was ensured via masked block randomisation. Group I received gabapentin 600mg and group II received paracetamol 1000 mg through anonymous packaging.  The participants were enrolled by the principal investigator and they were assigned to either of the two groups by the statistician who was not part of the research team. The participants and the study team were blind to the given intervention.

Hand surgery was done under general anaesthesia and the patients were provided with analgesic drugs once their Nil-per-Oral (NPO) period was over. The patients were constantly observed within hospital premises and were followed up after 6 hours of drug administration when they were reviewed for pain symptoms and other unusual side effects. There was only one follow-up which was conducted on the basis of a single dose of drug with no longer follow-up.

Data was collected using a pre-desgined structured questionnaire. Pain intensity before and six hours after drug intake was recorded using visual analogue scale (VAS) in the form of numerical scale 0-10, with 0 = no pain and 10 = most intense subjective feeling. Also, there were other categories in between these two extremes: 1-3 + slight and mild pain; 4-6 = moderate pain; 7-9 = severe and extreme pain. The patients were shown some pictures reflecting possible expressions with respect to the intensity of pain and were requested to point out the best possible approximate to their pain.

Data was analysed using SPSS 22. Paired t test was applied to assess significant association for VAS scores in both the groups. P<0.05 was considered significant. 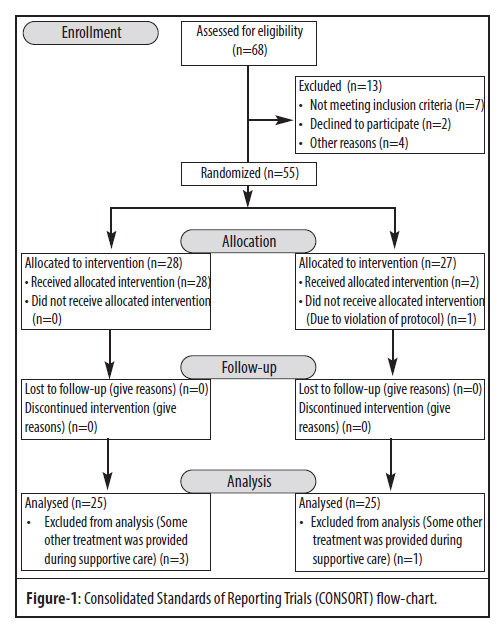 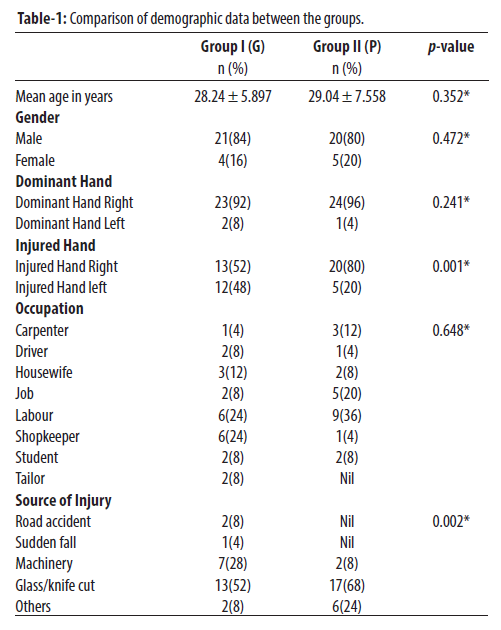 The mean VAS score decreased in both the groups, but the changes was not significant (p>0.05) (Table 2; Figure 2). 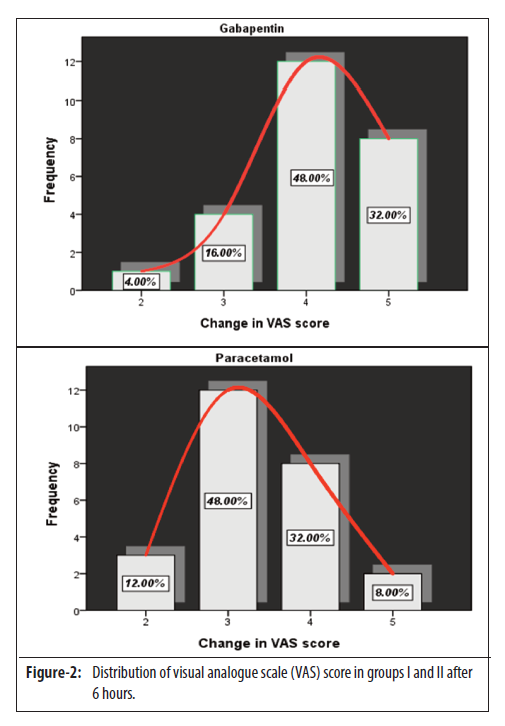 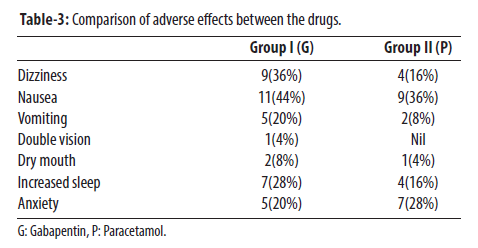 Hand injury is the fifth leading cause of ED presentation and costs a significant financial load over healthcare systems worldwide. A varying range of management modalities are being used nowadays with respect to the site of hand injured and involving structure, like nerve, tendon, blood vessels or skin,11 including medical intervention12 as well as surgical methods and implants, etc. to come up with better outcome.13

Hand injury is mostly common among persons involved in machine trade, and mostly people present with lacerations, followed by crush injury incidences, due to ill-handling of some equipment.14 In the current study, the majority participants were labourer and shopkeepers having complaints of laceration, while some had other modes of injury. Only a small number of participants had injured their non-dominant hand.

The trial drug gabapentin is known for its analgesic properties over different kinds of pain of neuropathic and neuralgic origins. For relief in diabetic neuropathy, post-herpetic neuralgia and postoperative pain, gabapentin is highly effective and is widely used preoperatively to minimise the pain following surgical procedures.15,16

Studies have shown the effective role of gabapentin in controlling limb's phantom pain.17 The current study revealed significant reduction in pain with respect to both the groups, but the coefficient values on a minor extent comparatively were more promising towards the paracetamol group. However, there were more peaks of change in the VAS pain status in the gabapentin group.

Amin et al. found that postoperative pain in the gabapentin group was significantly lower than the paracetamol group.18 This was also evident in the present study, where a slight difference was observed when correlation coefficient of both groups were compared.

Another study, with tibia fracture pain management, revealed that gabapentin was as effective as paracetamol. Pain scores in both groups were significantly lower at 2nd, 4th and 6th postoperative hours.19 Imani et al. concluded that a single dose of 600 mg oral gabapentin before thoracotomy significantly reduced postoperative pain during the recovery stay and the first postoperative hour.20 In the current study, standard doses of 600 mg of gabapentin and 1000 mg of paracetamol were provided six hours postoperatively, as increasing the dose of respective drugs were not likely to affect efficacy. However, there was a possibility that side-effects of increased dose would be evident in case of unusual increment.

A study on carpal tunnel syndrome (CTS) patients compared varied doses of gabapentin versus no-treatment group using VAS scores and found significant results after drug intake during the follow-up period.21 These finding are somehow inconsistent as statistical significance in the current study was not observed even though the participants reported clinical significance. Gabapentin is a drug known for its adverse effect as well. There is a wide range of adverse effects, ranging from minor symptoms, like dizziness, nausea and vomiting, to severe adverse effects, like hypoventilation and myopathies. Visual symptoms, suicidal behaviour, self-harm, somnolence, pruritus, urinary retention and diarrhoea have also been reported in literature.22,23 The current study explored and compared a limited number of side-effects. Nausea was reported clinically in both the groups, followed by dizziness and anxiety in gabapentin and paracetamol groups respectively. Only a small number of participants reported visual symptoms in the gabapentin group, which were not reported by any participant in the paracetamol group. All the reported symptoms of nausea, vomiting, dizziness, dry mouth, increased sleep and double vision revealed positive correlation, while anxiety reflected negative correlation with respect to drug intake. Participants in the gabapentin group suffered had side-effects than the paracetamol group, and a greater number of adverse effects were reported clinically in the gabapentin group.

The current study has limitations, including being a single-centre trial with limited number of participants, focussing entirely on hand injuries treated postoperatively only with standard doses, and having limited follow-up time.

Further studies with larger samples involving multiple centres are required to validate the findings. Various other parameters also need to be inquired, including other sites of injury at different doses. Anaesthesia and NPO breakout time should be inquired and should be compared in both the groups. The efficacy should also be studied in the elderly population, and those visiting private setups. Compliance with respect to side-effects should be inquired if multiple doses are recommended.

Gabapentin 600mg dose provided promising analgesic effect postoperatively in hand surgery cases and can be safely used besides other analgesics, like paracetamol. The side-effect profile for gabapentin still needs to be studied in large-scale trials. Moreover clinical efficiency of both the drugs in alleviating pain was almost similar, indicating that gabapentin can be a safe alternative for analgesic effect in hand surgery.

16.    Dahl JB, Mathiesen O, Møiniche SJAAS. ‘Protective premedication’: an option with gabapentin and related drugs? A review of gabapentin and pregabalin in the treatment of post‐operative pain. Acta Anaesthesiol Scand. 2004; 48:1130-6.

Effects of tibiofemoral mobilization in patients of Patellofemoral pain syndrome

The effects of whole body vibration on gait after chronic stroke: A Randomized Controlled Clinical Trial