Objective:  To investigate the interaction effect of psychological place attachment and proactive coping on psychological distress and mental well-being in sojourners.

Conclusion: Positive coping strategies were effective in re-educating the negative impacts of place attachment on well-being and buffering against psychological distress.

The above-cited evidences conform the impact of psychological place attachment on the mental health-related outcomes of academic sojourners. One step ahead of it is that when sojourners’ well-being and level of distress is affected by their memories of their place attachment with their place of origin, and they intentionally make use of some proactive coping strategy to deal with the heightened risk to their mental health. Proactive coping is viewed as having different positive capacities to advance well-being and prosperity.4 Individual traits and attachment advancement with a particular place is a disregarded area of research.5 The current study was planned to investigate the interaction effect of psychological place attachment and proactive coping on psychological distress and mental well-being in academic sojourners, or university students who shift from one place to the other for academic purposes.

The cross-sectional study was conducted from July 12, 2019 to July 12, 2020 at University of Sargodha, Pakistan and comprised academic sojourners. An ERC approval has been taken from committee. The sample size was calculated using G-power calculator6 and the sample was raised using purposive sampling technique from among academic sojourners of either gender aged 17-28 years belonging to different provinces of Pakistan and temporarily staying in local hostels away from their place of origin.  First of all, the heads of different hostels and departments were approached, and, with their permission, superintendents were approached who helped in approaching potential subjects. Informed consent was taken from each participant, and those who did not volunteer to participate were excluded.

The Kessler Psychological Distress Scale (K10) included 10 items related to feelings in the most recent 30 days. Scores are then summed up with the most extreme score of 50 demonstrating serious misery, and the base score of 10 showing no trouble. Cronbach's alpha of K10 is 0.88.7

The Warwick-Edinburgh Mental Well-being Scale (WEMWBS) has 14 items with 5 response categories. The scale is scored by summing up individual responses. The items are all worded positively and cover both feeling and functioning aspects of mental well-being. The psychological properties represent high reliabilities, face and content validity, with a Cronbach's alpha score of 0.89.8

The Proactive Coping Inventory has 55 items and seven subscales. Alpha reliability for each subscale is >0.75 which is good evidence. Three items are needed to reverse code. The scale has good content and construct validity.8

Data was analysed using SPSS 24. Descriptive statistics, alpha coefficients and Pearson correlation were calculated for all variables. Linear and multiple regression analyses were conducted to find out the mental health outcomes of psychological place attachment of the subjects. 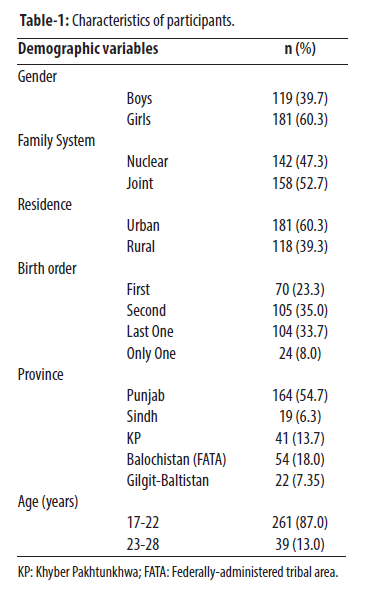 Pearson correlation, alpha coefficients and normality statistics of most of the variables were significant (Table-2). 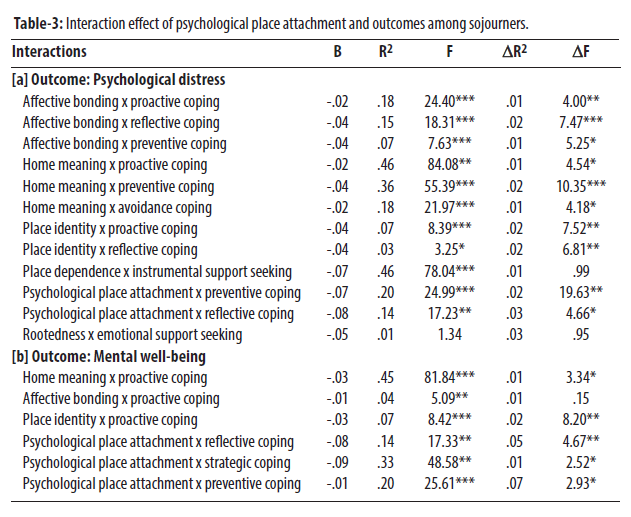 All moderation interaction are elaborated in the given figure (Figure). 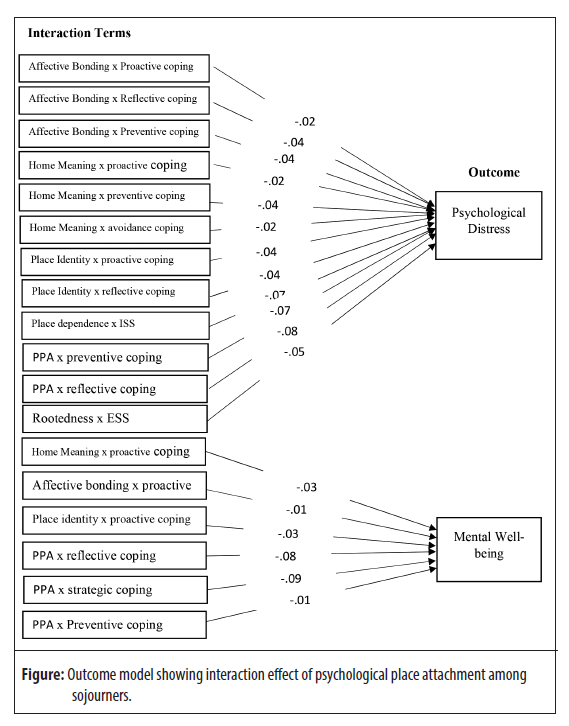 Reflective coping is about imitation and inspection about a diversity of possible behavioural substitutes, including thinking, solving problems and resources, and making hypothetical solution of action.9

Preventive coping foresees potential stressors and plans before these stressors grow completely. It alludes to a potential danger in future by thinking about understanding, expectation or learning. Proactive coping does not depend on risk, but is driven by objective endeavouring.9

The second moderation hypothesis was that proactive coping and reflective coping would moderate the relationship between affective bonding and mental well-being. It was also supported by the results. Research shows a significant proof for aggregation of muddling elements, repeats, and future chronicity in youthful grown-ups with emotional wellness issues.10 Conversely, positive educational encounters may, among other things, give the individual significant assets for coping well enough with existence changes.

The third moderation hypothesis was that proactive coping, preventive coping and avoidance coping would moderate the relationship between home meaning and psychological distress. Home meaning includes the basic necessities and sense of the home, such as lessening, feeling greeted, feeling safe, and as the place being viewed as one's home and person develop bonding with place.11 Avoidance coping is an act in a challenging situation by postponing.9

The fourth moderation hypothesis was that proactive coping was likely to moderate the relationship between home meaning and mental well-being. Engagement relationships, meaning and purpose, achievement or mastery, mental health are all domains of mental well-being.12 This evidence not only supports the hypothesis, but confirms the previous hypothesis about psychological distress and psychological place attachment. Another hypothesis was that instrumental support-seeking moderated the relationship between place dependence and psychological distress. Place dependence includes understanding and being familiar to the facilities being available in the home or the most wanted place in the facility. Most of those emotions toward the vital place are positive, like feeling love, happiness, joy, pride, and happiness once visiting (or thinking about) one’s place. However, people will generally hold negative feelings toward their vital places after they represent painful recollections or once the place has disappeared or changed.13

The other moderation hypothesis was that preventive coping and reflective coping moderated the relationship between psychological place attachment and psychological distress. It was supported by data.

In terms of limitations, the current study used no measure to control social desirability. Also, common method variance, and single-source data with no cross rated measure were also limitations. The study could have also extended itself to other areas like professional sojourners, but that was not done.

Despite the limitations, the current study was an applied research which can be helpful in understanding the impact of some effective and ineffective coping strategies in the continuum of place attachment and its outcomes.

Positive coping strategies were effective in re-educating the negative impacts of place attachment on well-being and buffering against psychological distress.