Objective: To determine the frequency of slow/no flow in primary percutaneous coronary intervention, to know the clinical and angiographical predictors of the phenomenon, and to investigate the immediate impact of slow/no flow on haemodnamics.

Method: The cross-sectional study was conducted at the National Institute of Cardiovascular Diseases, Karachi, from June 2018 to July 2019, and comprised patients presenting with ST elevation myocardial infarction who underwent primary percutaneous coronary intervention. Demographic and clinical details of the patients were recorded. The antegrade flow was assessed and determined using the thrombolysis in myocardial infarction criterion. Patients were assessed for the occurrence, predictors and impact of slow/no flow. Data was analysed using SPSS 21.

Results: Of the 559 patients, 441(78.9%) were males. The overall mean age of the sample was 55.86±11.07 years. Angiographical slow/no flow during the procedure occurred in 53 (9.5%) patients, while normal flow was achieved in 506(90.5%). The thrombolysis in myocardial infarction grade in the affected patients was 0 in 10(1.8%), 1 in 15(2.7%), and 2 in 28(5%) patients. Smoking status, prior myocardial infarction, prior heart failure, no history of pre-infarct angina, cerebrovascular disease, New York Heart Association class III or IV, Killip class III or IV, and lower ejection fraction were significant predictors of slow/no flow (p<0.05). The angiographical and procedural predictors were total occlusion of culprit vessel and high thrombus burden (p<0.05). Direct stenting and use of bare metal stents had significantly less chance of developing slow/no flow (p<0.05). The most common immediate impact was hypotension 26(49.1%) and bradyarrhythmia 5(9.4%). However, 2(3.8%) patients developed haemodnamically unstable ventricular tachycardia that resulted in mortality.

Conclusion: Predictors on the basis of history and angiographical features can be taken into account to anticipate the occurrence of slow/no flow phenomenon.

The most efficient way to restore the antegrade flow after acute ST-elevation myocardial infarction (STEMI) is primary percutaneous coronary intervention (PCI) and it minimises ischaemic damage to the myocardium as early as possible. No--reflow is a known complication of PCI that leads to impaired coronary blood flow despite the restoration of coronary artery patency.1,2 In one large study of patients with acute MI (AMI), the incidence of no-reflow during PCI was reported to be 2.3%.3 Patients who develop no-reflow are at an increased risk for left ventricular dysfunction (LVD) and progressive myocardial damage which increase cardiac mortality and morbidity. Experimental and clinical studies have demonstrated an association of the no-reflow phenomenon with large myocardial necrosis, known to be an important predictor of mortality.4,5 The no-reflow phenomenon is a strong predictor of 5-year mortality in patients with STEMI treated with primary PCI. Although much is known about the phenomenon of no-reflow, studies demonstrating the immediate impact of no-reflow on haemodynamics and cardiac rhythm are lacking. To achieve normal flow, features associated with a high incidence of no-reflow must be anticipated, and to prevent its occurrence, measures should be undertaken. The current study was planned to investigate the frequency of no-flow/slow flow in patients with STEMI undergoing primary PCI, and to recognise its predictors as well as to know its immediate impact on haemodynamics and cardiac rhythm of the patients.

The cross-sectional study was conducted at the National Institute of Cardiovascular Diseases, Karachi, from June 2018 to July 2019. After approval from the institutional ethics review committee, the sample size was calculated using online OpenEpi calculator6 on the basis of 2.3% expected prevalence,3 95% confidence level and 1.25% margin of error. The sample was raised using non-probability consecutive sampling technique from among patients of either gender aged 23-70 years who had primary PCI for acute STEMI. Patients with saphenous vein graft (SVG) intervention, left internal mammary artery (LIMA) intervention, patients who had coronary artery spasm and were treated conservatively, patients who had culprit lesion of <50% stenosis and no intervention, and patients who had rescue PCI were excluded.

Results from all consecutive patients who were treated with primary PCI for acute STEMI were acquired prospectively. All patients had undergone coronary angiography followed by PCI and those did not require intervention were excluded. All interventions were performed according to current standard guidelines. As a pharmacological regimen, all patients without any obvious contra-indication received 300mg aspirin orally, 600mg clopidogrel and a weight-adapted bolus of intravenous (IV) heparin (100IU/kg) upon admission prior to entering the catheterisation (cath) laboratory. The angiography was performed by right brachial or right femoral route to determine the culprit lesion. The antegrade radio-contrast flow of the infarct-related artery was determined on the final coronary angiogram by the operator using the thrombolysis in myocardial infarction (TIMI) criterion.3 TIMI flow grades are defined as grade 0 perfusion is no ante grade flow beyond the point of occlusion; grade 1 is minimal incomplete perfusion of the contrast medium around the clot; grade 2 (partial perfusion) is complete but delayed perfusion of the distal coronary bed with the contrast material; and grade 3 (complete perfusion) is antegrade flow to the entire distal bed at a normal rate. Patients who developed slow flow/no flow were assessed for its complications and impact as per the TIMI flow after managing it pharmacologically as per the guidelines. Patients were observed for the final procedural success that was defined by the angiographical criteria of <50% stenosis and TIMI III flow of distal vessels.3 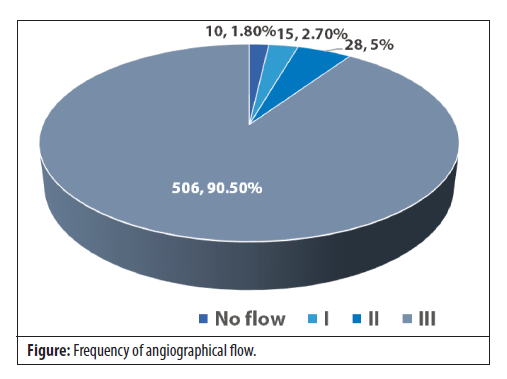 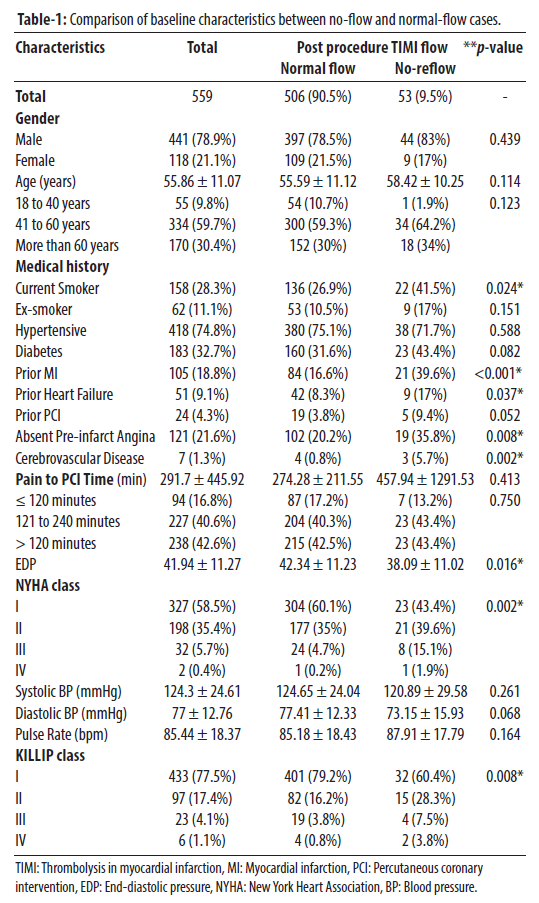 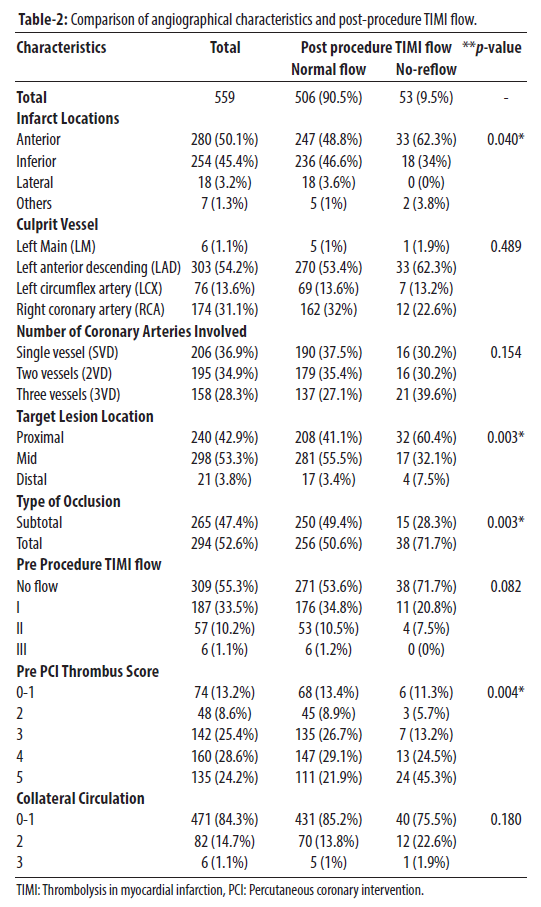 Among procedural characteristics, in 28(5%) patients only balloon angioplasty was done, while in 531(95%) patients, a stent was passed. The overall success rate was 535(95.7%). Slow flow was less in direct stenting than in balloon angioplasty (p=0.001) and bare metal stent (BMS) had lower chances of developing slow/no flow (p<0.001) (Table 3). 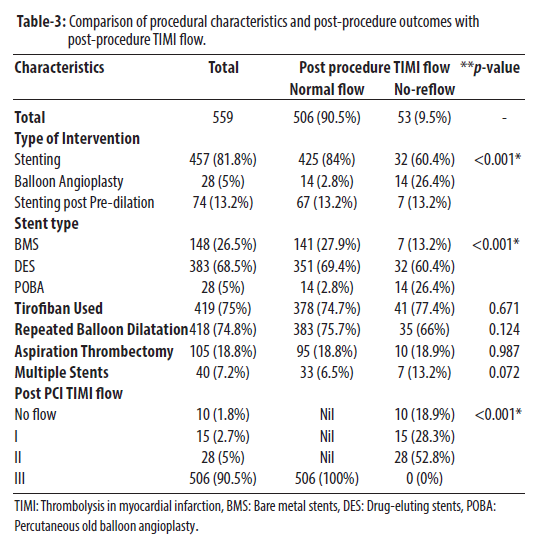 Tirofiban use, aspiration thrombectomy and multiple stents were not significantly related to slow/no flow (p>0.05).

The most common medication given for pharmacological management of no/slow flow were intracoronary adenosine and epinephrine which were given in 31(58.5%) and 7(13.2%) patients, respectively. However, no medication was given in 15(28.3%) patients. The final lesion success was significantly high in normal-flow patients compared to those with no/slow flow (p<0.05) (Table 4). 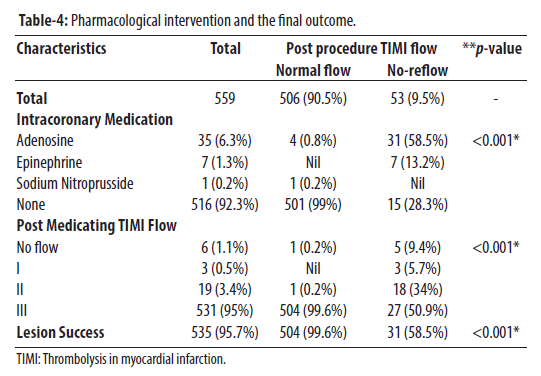 The study had slow/no flow rate of 9.5% during primary angioplasty for acute STEMI, which is consistent with earlier findings of 5-25%.7,8 Slow/no flow is a phenomenon with complex pathogenesis that leads to inadequate blood flow to the distil coronary vessels after PCI without apparent evidence of angiographical epicardial vessel occlusion, spasm or dissection.9-11 There are several methods to diagnose this condition, like angiography, myocardial contrast echocardiography (MCE), and cardiac magnetic resonance imaging (CMRI). The gold standard for the diagnosis of no-reflow is MCE, and CMRI is known to be the most sensitive and specific method to assess the extent of no-reflow. However, they are rarely needed as angiography alone usually suffices.12,13

The current study failed to show any significant correlation of age and gender with the slow/no flow phenomenon, but other studies showed significant correlation of age >60 years and the slow/no flow.14 It may probably be because of lower mean age 55.86±11.07 in the current study compared to 59.19±10.25 years in the other study.14

Smoking was found to be significantly related to the incidence of slow/no flow. Smoking causes induction of platelet adherence and pro-inflammatory state that causes atherogenic wall changes.15

Prior MI, prior heart failure (HF), a high NYHA class and low EF were related to the development of slow/no flow. Previous studies also demonstrated prior MI and low EF as independent predictors of no-flow during acute MI16 and one study showed usefulness of obtaining pre-procedural  N-terminal (NT)-pro hormone  brain natriuretic peptide (NT-proBNP) levels in predicting slow/no flow in acute MI, suggesting a strong relation with HF presence. The absence of pre-infarction angina has been shown to be related with no-flow. This may be related in part due to the presence of small infarcts in patients with angina that create a pre-conditioning-like effect and possibly collateral-formation, leading to lesser chances of no-flow.17,18

Higher Kilip class III or IV indicating congestive heart failure (CHF) was significantly correlated with slow/no flow. In HF, there is -thrombotic state that is multifactorial and intimately related to inflammation and endothelial dysfunction that may ultimately be related to the increased incidence of slow/no flow in these patients.19

The current study showed a significant correlation of total occlusion of the culprit artery and high thrombus burden with the slow/no flow phenomenon. It is well known that plaque rupture and fissuring that leads to superimposed thrombus formation is almost always the cause of acute coronary syndrome (ACS) and, during PCI, micro-vascular embolisation can occur either spontaneously or iatrogenically.20 Previous studies have shown that in acute MI cases, an intravascular ultrasound can be done to determine the plaque size and thrombus burden to evaluate the risk of no/slow flow.21,22

The current study found that direct stenting and use of BMS were less likely to cause slow/no flow, but tirofiban use, aspiration thrombectomy and multiple stents were not shown to have significant correlation. The most common medication used for the treatment of slow/no flow was adenosine, followed by epinephrine. However, intracoronary verapamil and sodium nitroprusside were never used. A lot of studies have suggested the use of adenosine, as it is well tolerated and has better clinical course and leads to better results for achieving flow.23 Evidence also showed that tirofiban administered with primary PCI following the administration of 600mg clopidogrel improved the primary efficacy outcome at 30-day and 1-year follow-up without any increase in major bleeding.22 The Acute Myocardial Infarction Study of Adenosine II (AMISTAD-II) was specifically designed to inspect the role of adenosine in STEMI, but no difference was found in the primary endpoint of new CHF, re-hospitalisation for CHF or death from any cause at 6 months.24 The use of custom-made balloons and localised instillation of adenosine can successfully reduce no-reflow.25 Intracoronary epinephrine has also shown to have salutary effects in the refractory no-flow in patients with STEMI, but reportedly resulted in significant yet tolerable rise in heart rate.24

The clinical presentation of the no-reflow phenomenon, despite often being related to the moment of reperfusion, varies greatly according to the clinical setting. In the catheterisation laboratory during on-table short-term intervention, the clinical presentation of no-reflow is often sudden and more dramatic. There is dye stagnation in the coronary artery and the patient complains of chest pain, and haemodynamic compromise may follow. The abrupt haemodynamic deterioration can also be due to athero-embolism and the reduction of blood flow in the non-culprit arteries.24-26 The current study found that the most common immediate effect seen as a result of slow/no flow was severe hypotension, followed by bradyarrhythmia, including blocks. VT, though rare, resulted in significant mortality.

The current study has several limitations. First it was a single-centre, non-randomised study with relatively smaller number of patients. Also, it relied mainly on the history of patients and did not perform specified tests for, among others, glycated haemoglobin (HbA1c) and fasting lipid profile, for the confirmation. Besides, the study only used angiographic TIMI score to assess the flow and perfusion, which is also the most common test employed, but other more specific tests like myocardial blush, myocardial contrast echo and ST segment resolution, may also be utilised. Finally, tirofiban use and thrombus aspiration I were very common in primary angioplasty which may prevent development of slow/no flow and, hence, the lower incidence.

Slow/no flow phenomenon accounted for 9.5% of primary PCI cases. Current smoking, presence of prior MI, absence of pre-infarction angina and history of cerebrovascular disease were significant predictors of slow/no flow. Presentation with higher NYHA and Killip class and low EF were strongly related to the slow/no flow. Angiographically, total vessel occlusion and high thrombus burden were powerful predictors. Direct stenting and use of BMS decreased chances for slow/no flow. The most common medication given was adenosine and the greatest effect was hypotension.