Objective: To assess sensitivity and specificity of the interferon gamma release assay test, and to pinpoint the influencing factors that should be taken care of in clinical application.

Results: Of the 960 samples, 516(53.75%) cases tested positive for tuberculosis infection and 444(46.25%) tested negative. The sensitivity of the pathological results was 86% and the specificity was 96%. The sensitivity of the interferon gamma release assay test was 95% and specificity 82%. Interferon release test, pathological results and final diagnosis showed significant comparisons (p<0.05). Significant relationships were also established for factors, such as age, interferon release quantity, lymphocyte, C-reactive protein and counts of mono-nuclear cell (p<0.05).

Conclusions: Interferon gamma release assay test was found to have high consistency with pathological results and final diagnosis and can be used as a subsidiary to traditional clinical imaging and pathological judgment.

Rapid diagnosis and treatment are key factors in tuberculosis (TB) control. To date, there is no accurate, rapid and reliable method for detecting mycobacterium TB (MTB) infection. Commonly used bacteriological detection methods include sputum smear microscopy and culture methods, as well as TB clinical gene amplification method and serological detection methods. However, these methods also have issues, like low sensitivity, poor specificity, high operational complexity, and long testing period. The World Health Organisation's 2014 report showed that the diagnostic rate of TB was only 37%1 and even in developed countries, only 50% of TB cases were confirmed by bacteriological methods.2 Therefore, the development of rapid and specific diagnosis of TB has become an urgent task to control its spread. TB can induce a strong cellular immune response, and, therefore, detection of TB-specific T lymphocytes can be used as a new path to detect infection.3 The current study was planned to assess sensitivity and specificity of the interferon gamma release assay test, and to pinpoint the influencing factors that should be taken care of in clinical application.

This study was conducted at the First People's Hospital in the Yunnan Province of China from October 2018 to March 2019. Fixed-point sampling method was used to select suspected TB patients who were grouped as suspect positive group A and suspect negative group B. The diagnostic criteria for active tuberculosis (ATB) required MTB culture to be positive in sputum, bronchoalveolar lavage fluid, tissue or other specimens in addition to typical clinical symptoms and imaging findings. The diagnostic criteria for latent tuberculosis infection-1 (LTBI) dictated TB-interferon test positive in routine screening, but no clinical symptoms and imaging findings related to TB4 with any of the following elements present; age <18 years; immunocompromised people having diabetes, malignant tumours, chronic renal failure; or anti-TB treatment >2 weeks.

Group A was isolated by pathological and bacteriological examinations and clinical testing, while group B had patients negative for TB by means of the detection of MTB by culture. IGRA results were compared with pathological results and its sensitivity, specificity, accuracy and consistency was tested for correlation. IGRA and pathological results were compared for final diagnosis using paired chi-squared tests. After the raters were confirmed, Cohen’s Kappa index, a statistic used to measure inter-rater reliability, was calculated. Linear regression was performed on each individual explanatory and potentially confounding variable. In order to eliminate confounding factors, analysis was performed on selected factors with statistically significant single factors. Binary logistic regression was chosen because the dependent variable, correct diagnosis, was dichotomous. Gamma release value, ESR, lymphocyte, CRP, and number of monocytes were continuous variables, while age was a discrete variable. R statistical software was used to produce correlation plots to guide final data fitting and modelling. The following generalised linear model regression function was used:

IGRA, pathological results and final diagnosis were significantly associated with each other (Table 2). 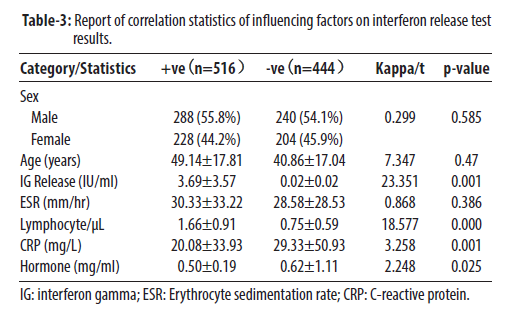 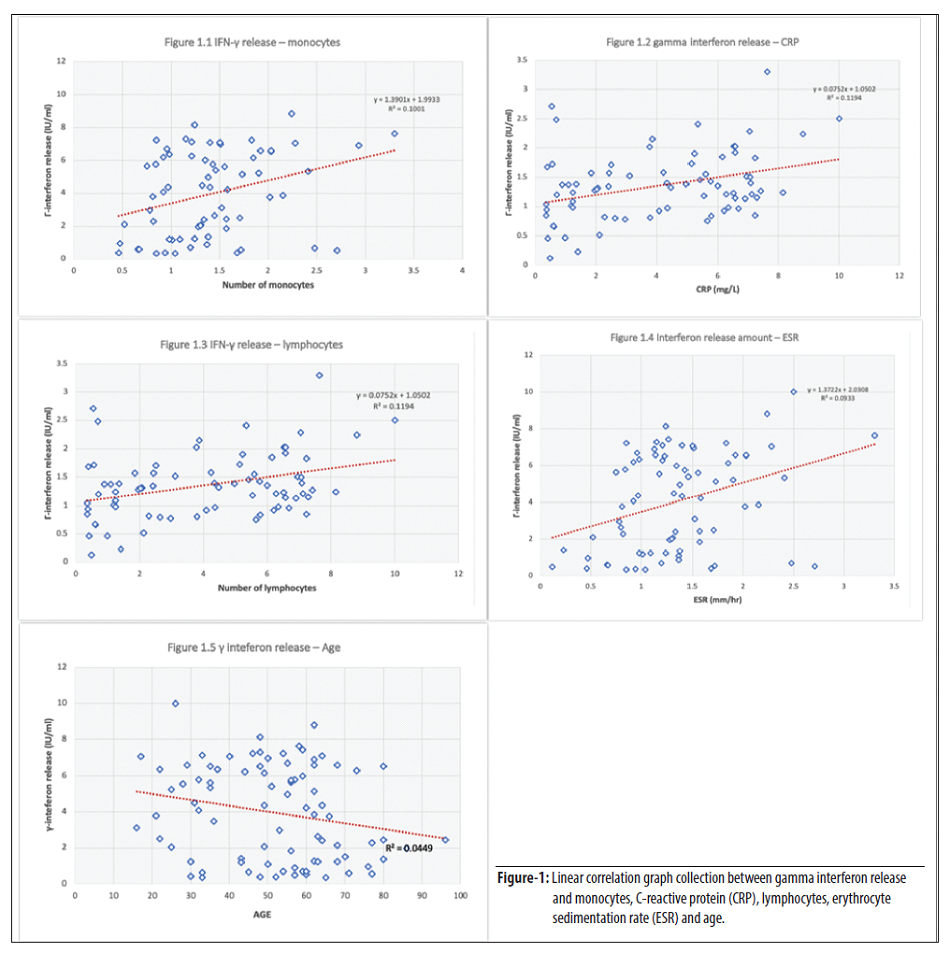 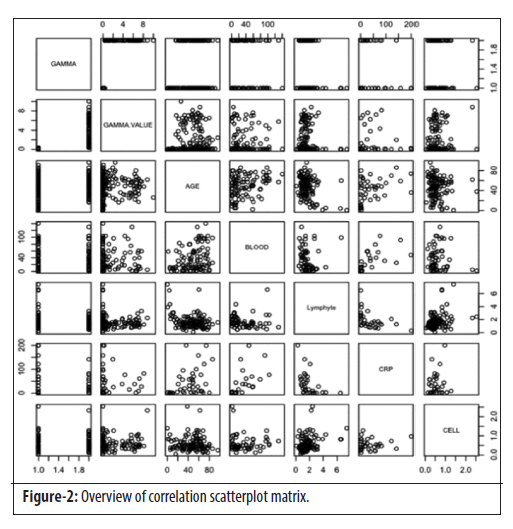 Scatterplot matrix showed all the interrelationships between explanatory variables. Analysis using logistic regression revealed a low Akaike Information Criterion index (AIC: 14) indicating a better fit model, and a reduced possibility of data overfitting. The analysis used gamma release amount as the dependent variable (IU/ml), while using age, EDR, lymphocyte, CRP and number of monocytes as the independent/explanatory variables. The median deviance residual was -2.110e-08 with the number of Fisher Scoring iterations at 25. After statistical reference, all five factors were found to be significant influencing factors (p<0.05).

The findings further established γ-interferon as a powerful complement to clinical traditional imaging and pathological judgment of TB. Specifically, this indicates that the interferon test results were not independent of the pathological results and the final diagnosis, strengthening the fact that IGRA test results and pathological results were also highly consistent between themselves. The IGRA tests detects gamma interferon produced by T cells at a specific antigen of MTB; its purpose is to determine whether there is an infection of MTB. IGRAs can make up for the deficiency of purified protein derivative (PPD) test and, furthermore, it has been used in many countries to diagnose LTBI, a special state after host infection of MTB. The MTB in the infected person is in a state of retention and cannot be diagnosed as ATB, but has the risk of developing into ATB. Early diagnosis and appropriate intervention for high-risk groups of LTBI have significant impact in TB control.5 The results suggest that the specificity of IGRAs for the diagnosis of MTB infection was highly consistent with the pathological results and final diagnosis, which is consistent with related studies.6 As a result of Yunnan’s status as a human immunodeficiency virus (HIV)-prone area, it is unsurprising that TB is the leading cause of death for HIV-infected patients. The reason, while IGRAs (especially cell detection) is less affected by the number of CD4+ T cells is that the number of individual nuclear cells has been normalised during the IGRA test, i.e. the number of lymphocytes is reduced in the detection procedure, with its impact being increased sensitivity. The IGRA diagnosis uses the genomic region of difference 1 (RD1) of MTB to encode an antigenic polypeptide as a specific antigen, mainly having an early secretory antigen target (ESAT-6) with a relative molecular mass of 6000 and a culture filtrate protein (CFP-10) antigen with a relative molecular mass of 10,000. On this basis, the TB7.7 antigen polypeptide was added.7 While ESAT-6 and CFP-10 are mainly present in the MTB complex, but are absent in  bacille Calmette-Guerin (BCG) and most non-TB mycobacteria, the specificity of IGRAs is better. However, there are certain limitations in sensitivity to gamma interferon, especially in patients with impaired immune function, such as rheumatoid arthritis, organ transplants, and other special patients with diabetes, or for glucocorticoids.

Immunosuppressive drugs, such as tumour necrosis factor-alpha (TNF-α) antagonists, lead to defects in the immune function, and with the patient's immune system impaired, the result is the inability of T cells to produce γ-interferon. This could have caused the lower sensitivity of IGRA to that of PPD.8 However, this type of patient is a high-risk group of LTBI who develops TB and henceforth, the interpretation of IGRA test results in clinical work must be analysed based on patient’s comprehensive factors in the best interest of the patient.

The current study focussed on age, gamma interferon release, lymphocyte count, CRP, monocytes and other influencing factors. According to relevant studies, non-steroidal anti-inflammatory drugs (NSAIDs)9, T cell activation inhibition agent10 and the application of glucocorticoids led to an increase in the total number of white blood cells, decreasing lymphocytes, resulting in a decrease in gamma interferon.11 The current study also confirmed that γ-interferon release, hormone use, lymphocyte count and CRP were non-significant, thus reaffirming the belief that these factors need to be further reviewed when the results of the gamma interferon test are uncertain.

The specificity of IGRA diagnosis of MTB was highly consistent with the final pathological results, but there were certain limitations in sensitivity. In patients with impaired immune system and immunodeficiency, clinical evidence should also be considered. At the same time, age, beta-interferon release, hormone use, lymphocyte number and CRP were found to be factors that need to be reviewed when the results of the interferon test are uncertain.

3.      Editorial Board of "Chinese Journal of Tuberculosis and Respiratory Diseases", Chinese Tuberculosis Branch, Chinese Medical Association. Suggestions for the application of γ-interferon release test in China. ZhonghuaJie He He Hu Xi Za Zhi, 2014; 37:744-7.

11.    Li Y, Karlin A, Loike JD, Silverstein SC. A critical concentration of neutrophils is required for effective bacterial killing in suspension Proceedings of the National Academy of Sciences of the United States of America. [Online] [Cited 2020 April 26]. Available from: URL: https://www.ncbi.nlm.nih.gov/pubmed/12060772