Objective:  To find the association between sexual dysfunction and depressive symptoms among type 2 diabetic women.

Methods: The cross-sectional study was conducted at the Military Hospital, Rawalpindi, Pakistan, from November 2017 to October 2018, and comprised diabetic women reporting for routine follow-up. Female sexual function index was used to assess the sexual function of the subjects. The presence of depressive symptoms was assessed using the Beck depressive inventory-II. Relationship of age, duration of diabetes, depression, education, level of family income and type of treatment was assessed with sexual dysfunction. Data was analysed using SPSS 23.

Conclusion: The prevalence of sexual dysfunction was found to be high among diabetic women. Female diabetic patients with increasing age should also be screened regularly for psycho-sexual problems.

Sexual dysfunction can be defined in a number of ways, but usually it is defined as the inability to achieve sexual arousal or satisfaction due to physiological, physical or psychological problems.1 Around 40-50% of the women get affected by this condition at some point in life.2,3 Female sexual dysfunction (FSD) occurs during the course of various medical illnesses, like Diabetes Mellitus (DM),4 ischaemic heart disease (IHD),5 pregnancy,6 depression and anxiety etc.7

DM is one of the commonest metabolic disorders. Patients from both developed and developing countries are affected in a number of ways by this multisystem disease. Females, due to their distinct physiology, have also been affected by this disease in many ways.8 Mood disorders, especially depression, has been linked directly with diabetes in various studies around the world.9,10 Hardcore organic and psychological forms of sexual dysfunction have been linked with DM in both the genders.11

Psychosexual problems have been studied among the diabetics for long. Usually the male population has been targeted in this regard. Studies exclusively focussing on women have also been conducted in the recent past. A study in Iran revealed a high percentage of diabetic females reporting FSD and it also had a strong link with depression.12 Similar results were reported in Poland.13 A study in Saudi Arabia showed FSD was a common complaint among diabetic women and was not linked with glycaemic control.14 Therefore, the bio-psycho-social model was proposed for a comprehensive understanding of this problem among the diabetics.11 Sexual dysfunction, if present for a considerable period of time, has been associated with distress and psychological issues15 which may not be desirable for good compliance and overall wellbeing of the individual.

Direct neurovascular damage may make individuals vulnerable towards organic sexual problems. Longstanding illness, obesity, poly-pharmacy, lifestyle modifications, end organ damage to all the vital organs and all the psychological problems associated with a chronic progressive illness may push the individual towards sexual problems.11-14

Weight-gain, increasing age, low socioeconomic status (SES), longer duration of illness and depression are factors that have been associated with sexual dysfunction among type II diabetes mellitus (T2DM) women, and physiological, psychological or social reasons have been said to be responsible for this association.11-14

A study in the local population explored sexual dysfunction among diabetic males16 but T2DM women have never been evaluated for these conditions locally. The current study was planned to investigate FSD in T2DM women and to look for any significant relationship with the presence of depressive symptoms.

The cross-sectional study was conducted at the Military Hospital, Rawalpindi, Pakistan, from November 2017 to October 2018, and comprised diabetic women reporting for routine follow-up.

The sample size was calculated using the World Health Organisation (WHO) calculator17 while keeping the FSD prevalence proportion as 78.7%.12 The sample was raised using non-probability sampling technique from among T2DM women diagnosed by consultant medical specialists for more than one year. Married females aged 18-50 years who were in a stable marital relationship for more than one year were included. Non-consenting women and diagnosed cases of any psychiatric or chronic medical condition other than DM were excluded. Females with history of depression or sexual problems prior to the T2DM diagnosis were also excluded, and so were those dependent on some illicit substance or pregnant at the time of study.

After taking ethical approval from ethical review board committee and informed consent from study participants, data was collected using the Female Sexual Function Index (FSFI), which is a validated tool to study the sexual function in diabetes.12,13 The validated Urdu version was used18 A score of 26 or less is the global cut-off indicating sexual dysfunction.

Both the study questionnaires were distributed among the subjects who were asked to fill them up according to their condition in the preceding few weeks. Also distributed was a demographic sheet comprising data related to age, duration of T2DM, depression, education, level of family income and type of treatment; insulin or oral hypoglycaemic drugs. Two age groups were made for analysis as after 40 years of age, peri-menopausal changes may start and affect the sexual function more in women suffering from diabetes. A recent economic survey in Pakistan was taken as a reference to classify the patients according to their monthly family income.20 On the basis of local and global literature, the duration of illness was classed as <5 years and 5 years or more.16,21

Data was analysed using SPSS 23. Frequencies and percentages were calculated for qualitative variables. Pearson chi-square test and binary logistic regression analysis were used to correlate the presence of depressive symptoms with FSD along with other social and demographic factors. P<0.05 was considered significant. 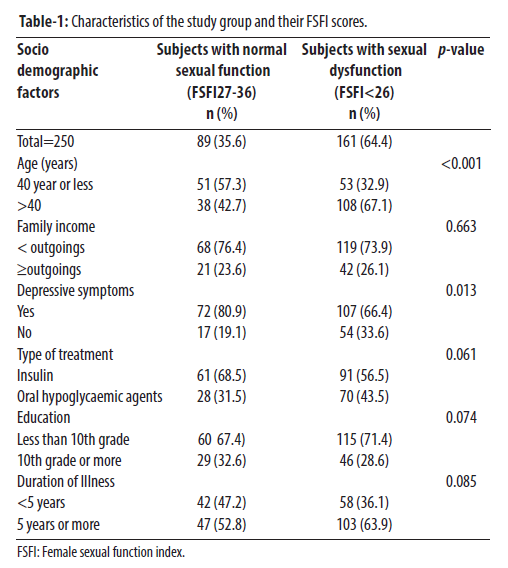 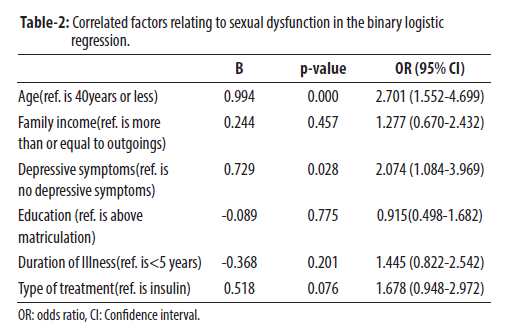 Depression and sexual dysfunction have been linked with T2DM in multiple studies.12,13 Using the FSFI, the current study found that around 64% women were suffering from some sort of sexuality dysfunction. These results are not different from those of studies done in the West.12-14 Some of the factors which have been found related to sexual problems in the diabetic patients are weight-gain, neurovascular changes, depression and atherosclerotic changes. Therefore, a comprehensive bio-psycho-social approach of the treating physician is required to diagnose and manage these issues in diabetic females.11

The presence of high psychiatric morbidity among diabetic women has been documented globally.9,10 Sexual dysfunction and psychiatric problems have a strong correlation.7 Sometimes it is difficult to establish the cause-and-effect relationship between the two problems both for the patient and the physician.22 Though sometimes a taboo in our part of the world, it has major implications on the quality of life of patients and the spouse, and it needs to be explored from all aspects. It is easier for the healthcare professionals to look for the physical causes of sexual problems during the course of T2DM treatment, but difficult for them to screen for psychological problems. Besides, patients in our social environment are themselves too shy to initiate this topic even though it affects their health.

The current study was done at a single centre and its results are not generalisable. Large-scale multi-centre studies covering both public and private facilities are needed to generate results that may be generalised. Screening tools have the potential of generating under-rated or over-rated findings, and the future studies should use more sophisticated tools or clinical interviewing instead of using scales.

High prevalence of sexual dysfunction was recorded among diabetic women. Women with psychological problems should be paid special attention in this regard. Female diabetic patients with increasing age should also be screened regularly for psycho-sexual problems during the course of T2DM treatment.