Meningioma resection carries a risk of venous thromboembolism (VTE) in 3-4% patients, which is not significantly higher as compared to glial tumours. Preventive measures have been extensively studied but are still controversial. Non-chemical conservative measures including intermittent venous compression/stockings are a safe and effective tool to prevent VTE in this group of patients.

Meningioma is one of the commonest brain tumour, comprising 13% - 26% of all intracranial lesions.1 Venous thromboembolism (VTE), including deep venous thrombosis (DVT) and pulmonary embolism (PE), have a comparatively higher incidence in patients who undergo craniotomy for meningioma resection than other brain tumours.1 Brain thromboplastin production during surgery, use of steroids, and hormonal and inflammatory factors released by the tumour itself attribute to post-surgical VTE development.2 Some reports suggest that patients who receive chemical prophylaxis i.e. low molecular weight heparin (LMWH) have lesser risk of VTE than others, but this is still controversial.3,4 The correlation between use of heparin and post-operative intracranial haemorrhage, make the associated complications of LMWH outweigh its routine administration.5 In this review we have studied the incidence and correlation of meningioma resection with postoperative VTE. 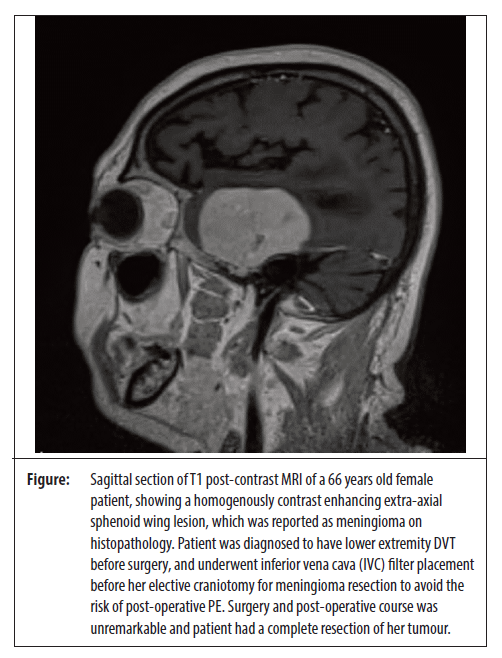 We searched the literature on multiple database for studies on meningioma resection and post-operative VTE. In a case series of 224 patients who underwent meningioma resection, Gerber et al., retrospectively studied the clinical factors associated with post-operative VTE. Eleven (4.9%) patients in their series had developed VTE after a median interval of 16 days from surgery.3 They reported a statistically significant association between VTE and old age, male gender and non-ambulation.3 Eisenring et al., conducted a cohort study and compared results of two different types of treatments for prevention of post-operative VTE associated with meningioma resection.1 Cohort A (n=482) was given an older regimen comprising of LMWH with compression stockings, and cohort B (n=242) was advised a new regimen comprising of 10o to 20o elevation of leg with intermittent pneumatic compression intra-operatively with heparin/LMWH.1 They found the new regimen to be more effective in preventing VTE. They also reported that skull-base meningioma was associated with greater risk of pulmonary embolism (PE). Hoefnagel et al., published a series of 581 patients who had under gone craniotomy for meningioma resections, and assessed VTE complications. All patients in their series were administered LMWH 24 hours post-operatively.6 VTE (DVT and/or PE) developed in 41 (7.2%) patients; 20 (3.5%) of these had DVT and 26 (4.6%) had PE, after 3-4 weeks of surgery.6 They reported increased body mass index (BMI) and prolonged bed rest after surgery as major risk factors for VTE. Karhade et al., using National Surgical Quality Improvement Programme (NSQIP) database for 8-year data, assessed the possible complications after meningioma resection associated with operative time.7 Their study reviewed one of the largest set of meningioma patients (3743), and reported the occurrence of VTE in 136 (3.6%) patients.7 These included 91(2.4%) that developed DVT, and 63(1.7%) that developed PE. After employing multivariate regression analysis, they concluded that prolonged operative time was a statistically significant risk factor for VTE.7 Carrabba et al., reported a significantly high occurrence of VTE in 82 (29.8%) patients.8 They recruited 275 meningioma patients in their study, and applied a screening protocol on all of them which comprised of daily clinical assessment, pulmonary perfusion scan on post-operative day 2, and venous ultrasound of both legs within 7 days of surgery.8 Multivariate analysis of their data showed that age ≥65 years and a KPS of <80 after surgery were independent risk factors for VTE.8 In a combined retrospective study with systematic review, Fluss et al. ,concluded that early mobilization after meningioma resection is the safest and most effective way of preventing VTE.2 In their own data of 189 patients, 3.55% developed VTE despite receiving LMWH in contrast to 4.06% developing VTE without LMWH. Previous history of DVT, volume of tumour and length of hospital stay were risk factors for developing VTE.2 Additionally, they had reviewed 11 articles (28,954 patients), and reported that LMWH does not increase the risk of post-operative haemorrhage, and potentially lowers the risk of VTE, but without any statistical significance.2

The risk of VTE after meningioma resection is 3–4%, irrespective of administration of heparin, which does not have a significant role in preventing VTE. Conservative measures such as compression stockings and early ambulation are effective in preventing post-operative VTE.

4.      Epstein NE. A review of the risks and benefits of differing prophylaxis regimens for the treatment of deep venous thrombosis and pulmonary embolism in neurosurgery. Surg Neurol. 2005;64:295-301.

5.      Iorio A, Agnelli G. Low-molecular-weight and unfractionated heparin for prevention of venous thromboembolism in neurosurgery: a meta-analysis. Arch. Intern. Med. 2000;160:2327-32.