Sarcomatoid Carcinoma of the Maxilla: A Diagnostic Dilemma

Sarcomatoid malignant neoplasm, are extremely rare and aggressive head and neck tumours characterized by twin microscopic differentiation of epithelial cell and mesenchymal cell tumours. The clinical and histopathologic features make it difficult to distinguish sarcomatoid cancer from epithelioid sarcoma; creating a challenge for the pathologist to arrive at a diagnosis. Squamous cell carcinoma is the second most common head and neck malignancy; of which only 3% show features similar to sarcomatoid cancer. We present a case of sarcomatoid carcinoma of the maxilla. This has previously only been documented in a few case reports.

A 54-year-old diabetic female presented with history of left upper alveolus lesion, nasal obstruction and decreased vision in left eye for 3 months. Her medical history was unremarkable and there was no history of sinus-related disease or trauma to the maxillofacial complex.

On examination, there was a large infiltrative mass lesion with epicenter in the left maxillary antrum involving the hard palate and soft palate, involving left buccal mucosa. On nasal endoscopy, the patient had an ulcerated, friable, well-circumscribed mass confined to the left nasal vestibule and attached to the cartilaginous septum. There was no palpable lymphadenopathy. 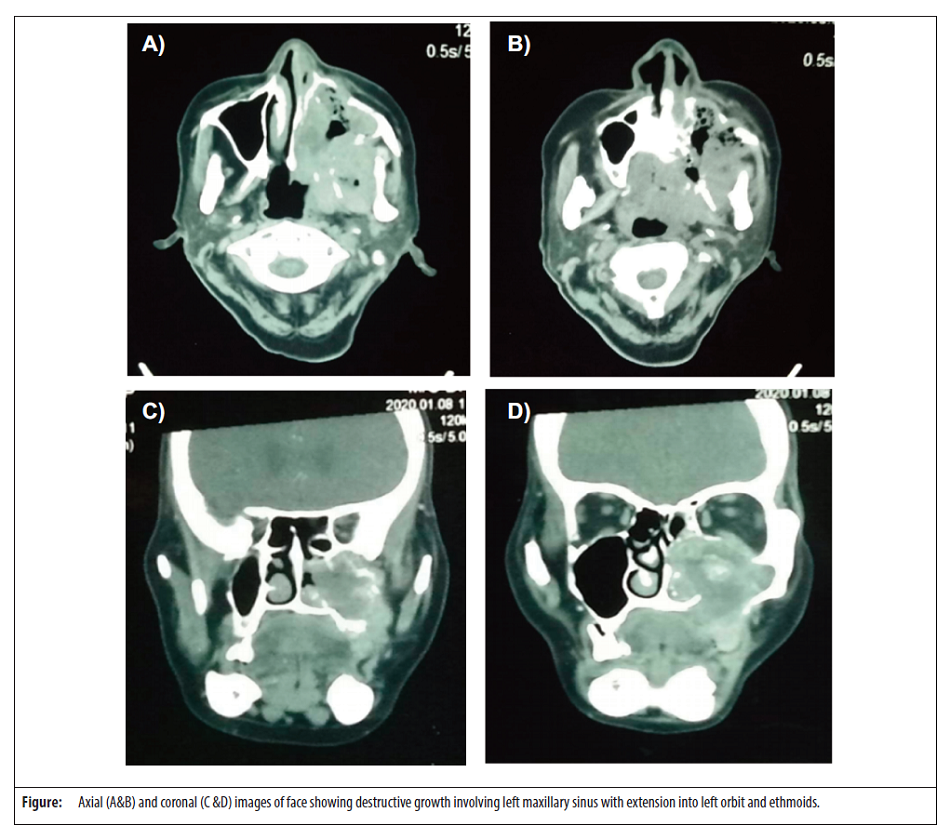 Histopathology revealed spindle neoplasm favouring sarcomatoid carcinoma. Patient received 5 cycles of chemotherapy, since it was already an advanced non-resectable tumour and surgery was not possible.

Wide surgical excision is the treatment of choice.1 Adjuvant irradiation might be of benefit in cases where the surgical margins are positive or in patients with nodal metastasis at the time of diagnosis. Radiation therapy can be an acceptable alternative for inoperable patients.

Due to limited number of reported cases, there are no standard recommendations for management owing to the rarity of this histology. Lack of literature creates an obstacle to the increased understanding of the behaviour, prognosis, and therapeutic management of this tumour.