Objective: To compare the efficacy of harmonic scalpel versus Milligan Morgan technique in patients undergoing haemorrhoidectomy.

Studies have reported advanced haemorrhoidal disease and techniques which are developed to lessen postoperative illness and dysfunction.12 HS method leads to complete wound healing in six weeks, while MM requires almost three months.13 Studies have also reported that pain in HS haemorrhoidectomy was less compared to the electro-cautery method, and this difference was also identifiable in analgesic ones.14 Even in developed countries, the disease has increased. Approximately 10 million Americans are said to be affected each year, with a prevalence of 4.4%.15 The causative agents for haemorrhoidal development include prolonged straining constipation.16

The current study was planned to compare HS and MM techniques in patients undergoing haemorrhoidectomy.

The comparative study was conducted at the General Hospital, Lahore, Pakistan, from March to September 2019, and comprised patients undergoing haemorrhoidectomy. After approval from the institutional ethics review committee, the sample size was calculated by using mean values of convalescence period as 7.4±3.6 days for HS method and 18.6±5.4 days for MSM technique, with 95% confidence interval (CI) and power of test 80%.14 The sample was raised using non-probability consecutive sampling technique from among patients of either gender aged 30-60 years with clinical diagnosis of grade-III and IV haemorrhoids. Those with recurrent haemorrhoids, history of previous surgery for haemorrhoids, and patients having a history of any chronic disease were excluded. After taking informed consent from the participants, they were randomised into HS group A and MM group B using the lottery method. All the patients underwent the procedure under spinal anaesthesia and aseptic measures by a single surgical team.

In group A, all participants were operated upon in lithotomic position. A Chelsea-Eaton operating endoscope was used for the treatment of haemorrhoids. The internal and external components of each haemorrhoidal complex were grasped and elevated. By a third, Allis clamp counter traction was applied on the skin, vaguely lateral to the inter-sphincteric groove. The clamp-like electrode was positioned beneath the external component and was activated. The process was completely bloodless and a suture took minutes to complete the radically-closed haemorrhoidectomy. In group B, MM haemorrhoidectomy was performed with diathermy removal of the haemorrhoidal complexes. The duration of surgery was noted. Patients were followed-up in OPD every week. Patients of both groups were further followed-up during the convalescence period.

Data was analysed using SPSS 25. Mean, standard deviation (SD) and range were calculated for continuous variables. For qualitative variables, like gender, frequencies and percentages were calculated. Independent sample t-test was used to compare the outcome in the groups. P≤0.05 was considered significant.

Patients of grades III and IV in each of the two groups were identified (Figure-1). 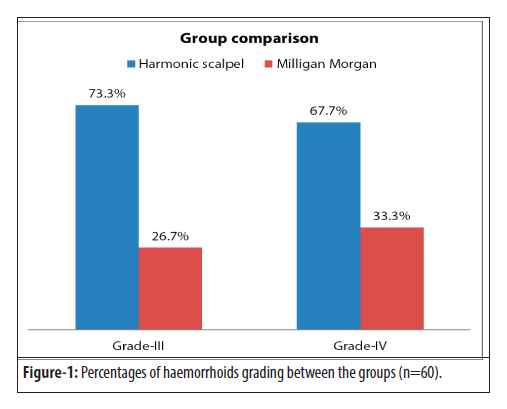 In both the groups, the patients were also stratified according to duration of their disease >6 months or <6 months (Figure-2). 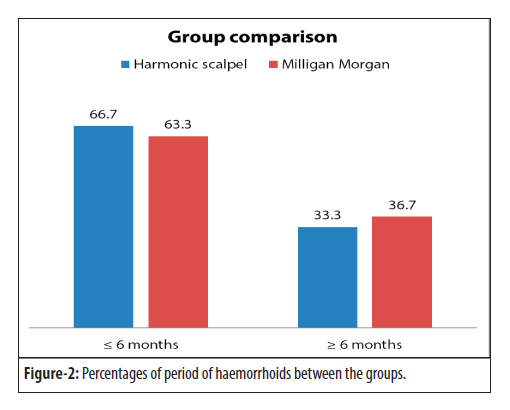 In group A, mean operative time was 20.8±2.8 minutes, while it was 26.5±2.8 minutes in group B (p=0.001). In group A, mean convalescence period was 9.7±2.9 days, while it was 13.4±3.7 days in group B (p=0.001). Group A required less time for complete wound healing compared to group B (p<0.05). Data related to convalescence period between the groups was stratified with respect to haemorrhoid grade (Table-1), while data related to the operative time was stratified with respect to the duration of the disease (Table-2).

The operative time and convalescence period were significantly low for male patients compared to female patients in both the groups (p<0.05).

However, the study warned that haemorrhoids must be treated cautiously, and there are numerous variables, like obstruction and delayed stressing during defecation, that may cause haemorrhoidal improvement.17

The vascular channel faces irregular dilatation and bending in the supporting connective tissues along with ruinous changes in the supporting connective tissue inside the butt-centric pad, and this is a significant finding related to the haemorrhoidal condition.18,19 Haemorrhoids are rich vascular sub-mucosal pads composed of flexible and smooth connective tissues that for the most part lie along the butt-centric channel in three sections; the left sidelong, right front and right-back positions. The blood vessels are clinically evident draining from the perisinusoidal arterioles in nature.20

Stomach pressure increases and so does the weight in the mediocre vena cava that makes these vascular pads engorged and forestall spillage. This tissue helps stool, fluid and gas in the butt-centric waterway.15 Treatment of haemorrhoids ranges from dietary and lifestyle amendments to radical dissection depending on the level and severity of the signs and symptoms.1 One of the unique advantages of the HS method is to cause negligible lateral thermal injury in the tissues.21

A decrease in oblique thermal injury (≤1.5mm) at the surgical site means decreased postoperative pain. The depth of the thermal damage in porcine little entrails mesentery was observed through different procedures, such as with monopolar and bipolar electro-cautery.22

HS achieved favourable postoperative pain scores compared to open or closed haemorrhoidectomy with scissors monopolar or bipolar electro-cautery in several prospective randomised studies which also reported less analgesic use and faster recovery with HS.23,24 The difference in pain was due to the avoidance of lateral thermal energy in HS compared to electro-cautery.

However, other studies, including the current study, found no significant difference in postoperative pain or other outcome variables between HS and conventional techniques.25

The major limitation of the current study was the non-availability of HS at the study site, and had to prepare by a local manufacturer of surgical instruments. The device was costly compared to the conventional cautery, and may not be preferred by many patients.

HS haemorrhoidectomy was found to be an advantageous method in terms of operative time and convalescence period. Hence, it can be adopted as a safe and effective alternative method for treating symptomatic haemorrhoids.