Breast Cancer (BC) is a major health issue in women all over the world. Delayed diagnosis of BC is preventable and has major effects on the patients' prognosis and survival. To explore the reasons of delayed diagnosis of BC in women in Punjab, Pakistan, a qualitative phenomenological study was conducted at the Jinnah Hospital, Sir Ganga Ram Hospital, and Mayo Hospital, Lahore. Females diagnosed more than four months after the appearance of symptoms of BC were recruited using purposive sampling until data saturation. Data collected through in-depth interviews of 15 participants using an interview guide was tape-recorded, transcribed and analysed using inductive thematic analysis framework method. Personal/psychological, Sociocultural, and Health care system related factors were the main themes that emerged from the data. Lack of knowledge, religious beliefs, use of Alternative medicine, socioeconomic status, cultural myths, and distant hospitals were the most influential determinants. Delay in diagnosis is a very significant problem in women with breast cancer and is linked with multiple determinants. However, educating women for recognition of symptoms and reinforcement to pursue earlier medical consultation will be helpful in reducing delay in breast cancer diagnosis.

Cancer is a major health issue all over the world, and is the second leading cause of death after heart diseases.1 Breast cancer (BC) is commonest in females and comprises 30% of all cancers.2 From 2005 to 2014, the occurrence rates of BC have surged around the globe with a growing public health burden in low-resource settings.3 In Pakistan, the rate of occurrence of BC is highest (23%) among all cancers, whereas BC is also responsible for the highest death rate (16.1%).4 Furthermore, majority of patients presented at advance stage i.e. 50 % at stage III and 23% at stage IV.5

Screening and early diagnosis is the key to reduce the mortality rate in technologically advanced countries. In the USA, five-year survival is observed—99% in localised, 85% in regional, and 27% in metastatic disease.6 It has been observed that delay in detection of BC is associated with large tumour size, involvement of lymph nodes, and poor prognosis after the surgery, etc. Many reasons contribute to this delay; for instance, delay in diagnosis in West Africa was related to unaffordability and lack of awareness of breast cancer symptoms.7 Similarly, in Sudan the most prevalent factor reported was financial constraints.8

Looking into the Asian context, research conducted on the topic under study in Iran, India, and China presented similar picture, that is, illiteracy, low socioeconomic status, sociocultural factors, religious factors, lack of female physicians, and lack of awareness about the disease lead to delay in diagnosis of BC.9-11

Therefore, to address this deadly dangerous issue in Pakistan, there is a dire need to observe the actual reasons of delay between the appearance of symptoms and diagnosis of BC. Hence, the current study was conducted with the objective of exploring in detail the phenomena of delayed diagnosis of BC and reasons of delay among females of Punjab (Pakistan).

A qualitative approach based on phenomenological epistemology was used to explore lived experiences of people in detail.12 The study was conducted in BC clinics/departments of three government hospitals of Lahore, namely, Jinnah, Sir Ganga Ram, and Mayo Hospital from August 2019 to December 2019. Females with delayed diagnosis of BC (after four months of appearance of symptoms) with age between 30 to 65 years were included in the study using purposive sampling. A total of 15 participants were interviewed using the principle of data saturation.13

Detailed interview guide was developed as a tool for data collection by the primary researcher with her own experience and extensive literature searches, and was reviewed by experts. The first part of the guide comprised demographic information, while the second part consisted of open ended questions with a focus on exploring reasons of delay in the diagnosis of BC.

After approval of Institutional Review Board (IRB), University of Health Sciences (UHS), Lahore, administrative permission from authorities of all relevant hospitals was obtained.

The researcher herself conducted the interview. After introduction to the participants, the purpose of the research and procedure of data collection was explained. Written informed consent was obtained, and then direct face-to-face interviews with the patients were conducted to collect the data. Interviews were conducted in separate room to assure confidentiality and privacy and the participants had a right to withdraw from the study. The interviews were recorded with the permission of the participants and continued until a point of saturation of information was reached. Average duration of an interview was 43 minutes and language of communication was Urdu, to facilitate discussion (Annexure). 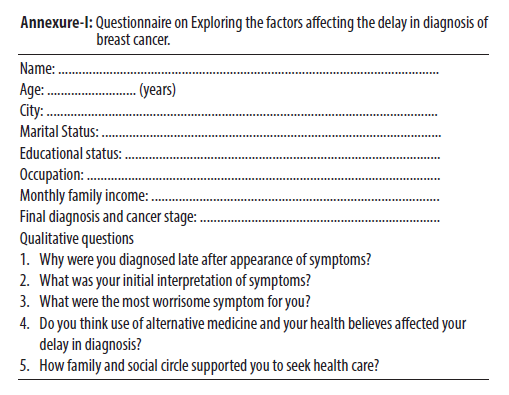 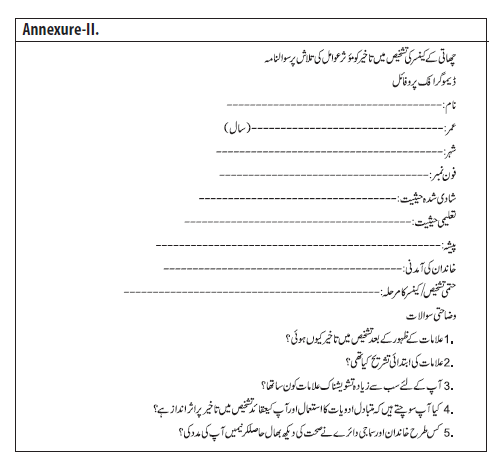 Step 1: Become familiar with the data

Each participant was given an identity document (ID) number. Interview recordings were transcribed manually, read and re-read, coded and analysed for themes generated. Then, the researcher discussed all the transcripts with the co-authors to ensure that selected themes were representative of the data.

Quantitative Findings: An in-depth interview of 15 participants was conducted who were the diagnosed cases of BC with the mean age of 46.4±8.846 years that ranges from 32 to 60 years. Total 14 (93%) of the participants were married. More than half, about 9 (60 %) participants belonged to poor socioeconomic background. Participants diagnosed at stage III and IV were 8 (53.3%) and 6 (40%) respectively. Mean duration of the delay was 16.6±11.51 months with range of minimum delay of five months to maximum delay of three years. Participant’s demographic characteristics are shown in Table-1. 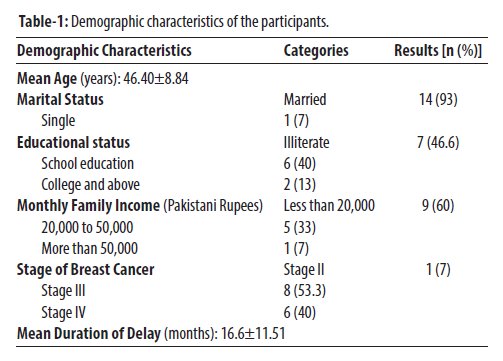 Qualitative Findings: It is obvious from the findings that majority of the patients present themselves for treatment at later stage of the disease in Pakistan, when treatment options are limited.14 Personal/psychological factors, sociocultural factors, and health care system factors emerged as the main themes from qualitative analysis of the subjective data. Factors causing delay in diagnosis of BC originated within the main themes. Detailed summary of the themes is given in Table-2. 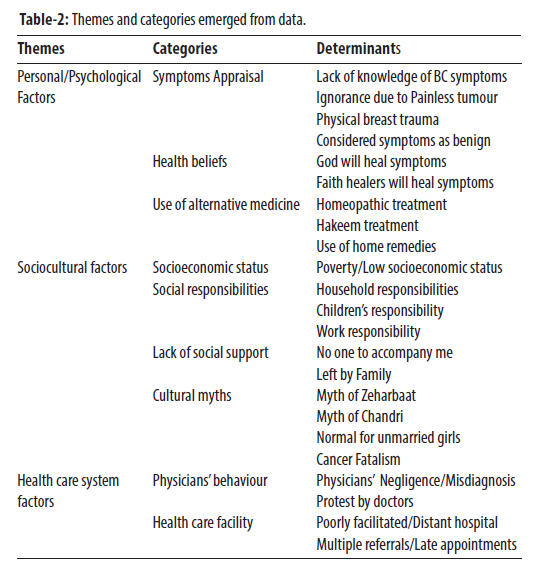 Theme-1: Personal/Psychological Factors: The factors that contribute to delay purely on the patient’s end are explained under the theme of personal/psychological factors such as negligence or ignorance and problems with initial interpretation and labelling of the symptoms.15 Mostly participants i.e. 12 (80 %) said that painless tumour, physical breast trauma and ambiguity of symptoms confused them and they did not take the symptoms seriously.16

“Initially the tumour was painless and very small so I did not take it seriously. I did not tell anyone as it was not bothering me” (ID1, ID3)

Health beliefs of the participants about health and disease caused delay in diagnosis of BC. Participants left it totally on God and 10 (66.7 %) participants had faith in religious healers and went to them for treatment instead of consulting a doctor.17

“After appearance of tumour, I went to Pir Sahib. He gave me mud to apply on my breast. I used that but my problem did not resolve and tumour got enlarged. Now it is painful too.” (ID1).

Alternative Medicine treatments such as Homeopathic, Hakeem and home remedies were preferred by 6 (40 %) participants for the treatment of cancer which further delayed the diagnosis.

“I went to Homeopathic doctor because I think Allopathic medicine has hot effect. After using homeopathic medicine for months, my symptoms did not resolve instead the lump enlarged and was painful.” (ID1, ID5).

Theme 2: Sociocultural Factors: Socioeconomic Status and Poverty was one of the reasons of delay in the diagnosis of breast cancer as majority of the participants i.e. 9 (60%) reported that they cannot afford basic living needs so did not have money for treatment. Furthermore, social responsibilities and lack of social support was reported as reason of delay by the participants.18

“I could not go to the hospital because I am very poor. I did not have any earning hand in home. I used to take inexpensive treatments from unqualified doctors for tumour.” (ID9, ID14).

“When I felt tumour, I was told by friends and relatives that it is Zeharbaat and I should go to faith healer. So I did.”

It is also a myth that unmarried girls have lumpy breasts which get alright after marriage. Concept of cancer fatalism also prevented 3 (20 %) participants from seeking medical care when they suspected cancer.

“The physician said it could be cancer. I ran back to home because someone told me that cancer is fatal and that once you have it, you cannot survive. So I was afraid and delayed investigations until it could be.” (ID5, ID13).

Theme 3: Health Care System Factors: About 3 (20 %) participants perceived that physicians are also responsible for the delay in diagnosis because they were misdiagnosed by the physician initially and a participant reported that her diagnosis was delayed because the doctors were on protest for their rights and she was not able to get her check-up and investigations done.20

“When I went to a physician in my city, he removed the tumour by surgery and assured that I was alright. I did not receive any chemotherapy or radiation that is why tumours appeared again and now spread around.” (ID4).

Nearly half of the participant i.e. 7 (46.6%) perceived poor health care facility for cancer in their area as one of the major reasons for the delay in diagnosis and treatment. Multiple referrals in hospitals and late appointments for investigation were also pointed out.21

“I waited long for my appointments for investigations and they sent me from one physician to another that caused more delay in the diagnosis.” (ID1 & ID11).

Multiple personal, psychological, socio-cultural and health care system related determinants have been observed. Females from low socio-economic status are at higher risk of delayed diagnosis of BC because of poverty and lack of facilities. Moreover, lack of knowledge regarding the symptoms, use of alternative medicine, poor health practices, and economic hardships, treatment from faith healers further deteriorate the condition. Women must be acquainted with sufficient information about the different presentation of breast cancer symptoms, critical importance of seeking medical help and treatment at the earliest.  Implementing an intensive BC awareness campaign addressing related myths and misconceptions will reduce the burden of late-stage breast cancer in Pakistani women.

The current study has certain limitations, such as the findings cannot be generalised and data may have lost some exact meanings as it was translated from Urdu to English and some cultural terms have no translation in English, like Chandri, Zeharbaat, Hakeem, etc.

Findings of the study can be implicated to conduct large scale studies. Quantitative questionnaire can be developed and hypothesis can be drawn and tested in further quantitative studies such as “Health Believes cause delay in Diagnosis of BC”.

To assess students’ perception about Kahoot! as an innovative learning tool in oral pathology- a qualitative study