Method: The descriptive cross-sectional study was conducted at the departments of Oral and Maxillofacial Surgery, Peshawar Dental College, Peshawar, Khyber College of Dentistry, Peshawar, and the Pakistan Institute of Medical Sciences, Islamabad, Pakistan, from April, 2016 to March, 2017, and comprised serum of oral squamous cell carcinoma patients in group A, oral potentially malignant disorder patients in group B and healthy individuals in group C. Serum concentrations of anti-p53 antibodies were determined by enzyme-linked immunosorbent assay. Data was analysed using SPSS 20.

Conclusion: The expression of circulating p53 antibodies in serum samples of squamous cell carcinoma and oral potentially malignant disorders patients indicates the potential to be a probable candidate for being taken as a diagnostic or prognostic biomarker.

Globally, oral squamous cell carcinoma (OSCC) represents the most frequently developing malignancy of all oral cancers.1 Pakistan ranks among the countries with the highest incidence of oral mucosal malignancies.2 According to the collective cancer registry report of Shaukat Khanum Memorial Cancer Hospital and Research Centre (SKMCH&RC), from December 1994 to December 2018, the carcinomas of lip and oral cavity were the 3rd most frequently occurring malignant tumours.2,3 OSCC is usually accompanied by late-stage diagnosis and low survival rates.4 OSCC mostly emerges from oral potentially malignant disorders (OPMDs), which comprise a variety of chronic mucosal disorders with a raised risk of malignant transformation.4 Thus, for improving the prognosis, researchers are consistently searching for biomarkers that can help in the early stage and appropriate detection of OSCC and its epithelial precursor lesions, alone or in addition to other methods, like the conventional oral examination (COE) and histopathological evaluation.5 The development of oral cancer occurs as a result of multistep genetic events that alter the normal regulation of both oncogenes and tumour suppressor genes (TSGs), leading to conversion of normal oral epithelium into malignant one via histological episodes of  hyperplasia, dysplasia or carcinoma in situ (CIS).6 The inactivation of TSGs represents one of the key events in the development of oral malignancy and pre-malignancy. The TSGs include retinoblastoma (RB), tumour protein 53(TP53), phosphatase and tensin homolog(PTEN) gene, neurofibromin 1 (NF1) etc.7 The p53 gene is the most immensely explored gene among the TSGs linked with OSCC.8 The gene is positioned at the short arm of chromosome 17 and its outcome protein p53 has a molecular mass of 53 kilo Dalton (kD). Wild type p53 (wt-p53) protein is known as the normal p53 protein and the abnormal form is called the mutated type.7,8 In cancer biology, the role of p53 is noteworthy as it has been titled as the ‘molecule of the year’,9 the‘guardian of genome’, the ‘policeman of oncogenes’,10 the ‘caretaker and gatekeeper gene’ etc.11 The tumour suppressor functions of p53 are achieved via cell cycle arrest, repair of deoxyribonucleic acid (DNA), senescence and apoptosis.7-11

Epidemiological studies have marked the alterations in p53 gene, leading to accumulation of p53 protein in the tissue samples of oral cancerous and pre-cancerous lesions, with resultant induction of p53 auto antibodies (Abs) in circulation as a part of humoral immune response.12

There is dearth of data on serum p53 antibodies in oral cancer and pre-cancer patients in Pakistan. The current study was planned to detect anti-p53 Abs in serum of OSCC and OPMD patients compared to healthy individuals.

The descriptive cross-sectional study was conducted at the departments of Oral and Maxillofacial Surgery, Peshawar Dental College (PDC), Peshawar, Khyber College of Dentistry (KCD), Peshawar, and the Pakistan Institute of Medical Sciences (PIMS), Islamabad, Pakistan, from April, 2016 to March, 2017. The ethical approval of the study was given by institutional review board of Prime Foundation Pakistan (IRB Approval No. PMC/IRB/2015-003). The sample size was calculated using STATA software with 80% power and 95% confidence interval (CI) for a 2 tail hypothesis with 1:1 ratio. The expected prevalence values were taken in line with literature.13-16 After permission from the unit heads of the three hospitals, the study sample was raised using non-probability purposive sampling technique from among individuals of either gender aged 20-95 years. The patient groups A, with OSCC, and B, with OPMD, had histopathologically-diagnosed cases of OSCC and OPMDs who had not yet received any treatment for oral malignancy or pre-malignancy. Those with coexisting conditions, like liver cirrhosis, acute and chronic pancreatitis and diabetes, were excluded. Healthy individuals in the control group C were enrolled from among those visiting the centres for dental treatment. After taking informed consent from all the subjects, detailed history of each participant was recorded on a structured proforma. Both tobacco users and non-users were included and tobacco usage history was recorded for all the participants. Tobacco usage was categorised as ‘present’ ‘ex’ and ‘non-user’, type of tobacco products were categorised as ‘smoked tobacco (ST) and‘ smokeless tobacco (SLT), while the duration of tobacco use was noted in terms of years and daily frequency of usage.

Venous blood 5ml was collected from all the subjects under aseptic conditions, and the sample was stored in a disposable and non-pyrogenic vaccutainer; serum separator tube with yellow-colour stopper for p53 Ab analysis. The blood was centrifuged, followed by collection of serum and placed in Eppendorf tube at -20 degrees till it was analysed for serum p53 Abs using enzyme-linked immunosorbent assasy (ELISA) by strictly following the manufacturers’ instruction for each kit.17 The concentration of p53 antibodies was measured in pg/mL units using an automated microplate reader (Heales-MB 580, China) set at 450nm. The observed concentration of p53 Ab was marked as positive at 401 pg/mL and above, and negative at 0-400 pg/mL. For sero-positive test result, the titre was further graded as mediumly raised at 401-800 pg/mL, highly raised at 801-1400 pg/mL, and very highly raised at >1400 pg/mL. 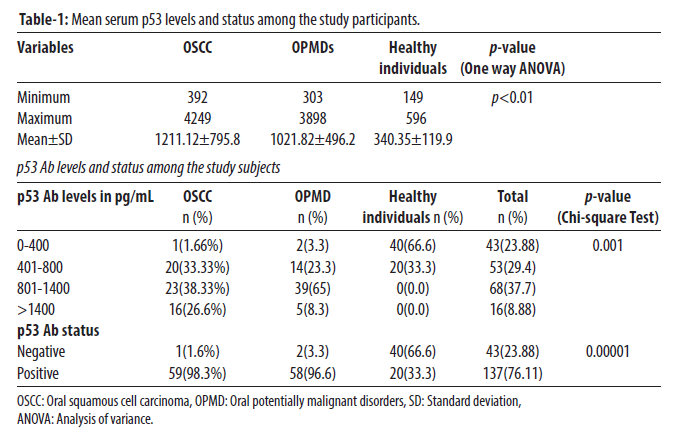 The p53 seropositivity and histopathological parameters were not significantly different between patient groups A and B (p>0.05) (Table-2). 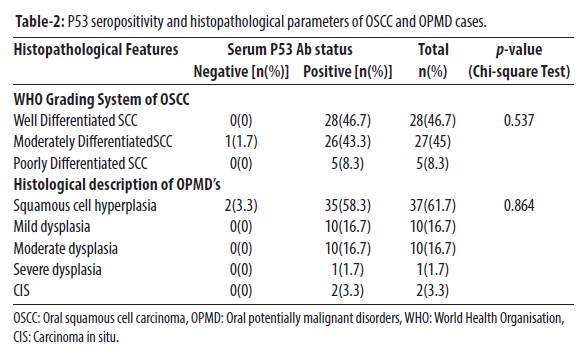 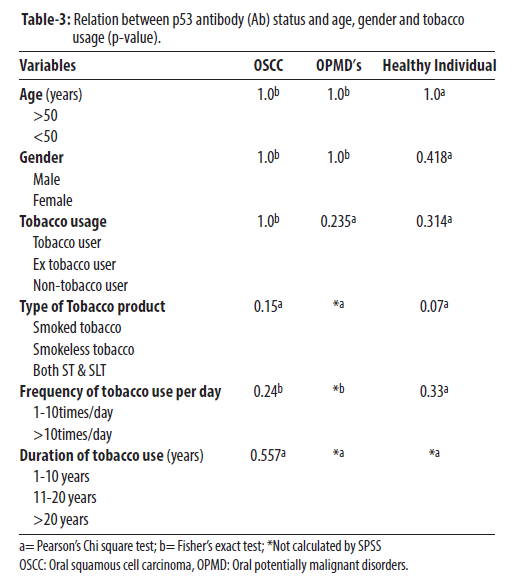 To the best of our knowledge, the current study is the first to be done in Pakistan to detect anti-p53 Abs in the serum of OSCC and OPMD patients compared to healthy individuals.

OSCC is the frequently occurring oral epithelial malignancy that mostly originates from OPMDs.1,4 There is always a perpetual search for a biomarker that can assist in the timely diagnosis of OSCC and for improving the prognosis of its precursor lesions.5 In the present study serum p53 antibody status was evaluated among cases of OSCC, OPMDs and healthy individuals to explore its probable role in the timely indication of oral malignancy and pre-malignancy.

The age range and mean age of the subjects in the current study were in accordance with other national and international reports, and so was the preponderance of old age.18,19 Studies have marked age as a risk marker in OSCC development and prognostic indicator in OPMDs.20-22

In the present study, both OSCC and OPMDs developed more commonly among males compared to females, which is in accordance with other local and international studies.18-20 This may be due to the fact that males are more frequently involved in tobacco usage habits than females, and are also exposed to direct sunlight owing to outdoor occupations, especially in case of lip lesions.

In the present study, the mean serum p53 antibodies levels were significantly different in OSCC, OPMD cases compared to healthy controls. The finding is inconsistent with reported lower frequency of detection of serum antibodies among OSCC cases.13-15,23-25 The present study reported highly raised frequency of p53 Ab sero-positivity, which may be due to the specific types of p53 mutation that do not result in the production of Abs.16 Also, among carcinoma cases, serum p53 Ab status was not significantly related with age, gender, tobacco usage history, type of tobacco product consumed, frequency of tobacco use per day and duration of tobacco use in years, and histological grades. These observations were in accordance with literature.25,26

In the present study, 2 OPMD cases were sero-positive for p53 auto-antibodies, which is contrary to earlier findings.14,15,24 Among OPMDs, the increased frequency of p53 Abs suggests that it might act as an indirect method of detecting p53 alterations and could have role in the timely diagnosis of OSCC.

It was observed in the present study that p53 Ab status was not significantly related with age, gender, tobacco usage history, type of tobacco product consumed, frequency of tobacco use per day and duration of tobacco use in years, and with histological parameters of OPMDs. To our knowledge, no study has assessed these parameters with respect to serum p53 antibodies among OPMDs so far.

Among the healthy individuals, 20 expressed serum p53 antibodies. The finding is contrary to the variable results reported by other studies ranging 0-24.2%.14,15,24,26 This difference is most probably due to demographic variation of the population under study.

In the present study, the employment of non-probability sampling technique and use of ELISA for the measurement of serum p53 Abs, instead of Western Blot test (WBT) or immune-precipitation, may be considered its limitations. However, ELISA has been used in several studies as one of the rapid and appropriate methods for p53 Ab detection.12,16,29

Significant relation was observed for serum p53 Ab status and levels. Serum p53 Ab in serum can be considered and evaluated as a potential indicator for improving the diagnosis and prognosis of OSCC and OPMDs. Also, sero-positive cases of OPMDs should be more closely observed than p53-negative cases in the follow-up visits. In developing countries, like Pakistan, the use of low-cost assay for p53 Abs in serum and saliva could have clinical utility in assessing the high-risk individuals, such as cases of oral potentially malignant lesions and healthy individuals with exposure to risk factors for OSCC development.

Disclaimer: The text is based on a PhD thesis done at the Riphah International University, Islamabad, Pakistan.