Methods: The retrospective study was conducted at the department of surgery/section of ophthalmology, Aga Khan University Hospital, Karachi, and comprised data of patients who underwent immediate sequential bilateral cataract surgery between January 1, 2009, and December 31, 2018. A structured proforma was used to collect data. The primary outcome measure was the incidence of endophthalmitis. Data was analysed using SPSS 23.

Cataract is the leading cause of preventable visual loss in people aged >40 years. It is estimated to be responsible for 47.8% of global blindness, and 51% of blindness in South Asia.1 Both unilateral and bilateral cataract surgeries have shown to improve vision and quality of life (QOL).2 When a cataract is present in both eyes, it may be removed by sequential surgery on separate days, also referred to as delayed sequential bilateral cataract surgery (DSBCS). An alternative option is immediate simultaneous bilateral cataract surgery (ISBCS) which involves removing bilateral cataracts on the same day. ISBCS may be beneficial for both patients and healthcare units.3 However, despite the advancement in techniques of phacoemulsification cataract surgery, and shortened recovery time, ISBCS is still a contentious topic in ophthalmology.4 Even though there is no evidence of additional risk with ISBCS, it is not performed as a routine procedure by most ophthalmology centres.5

Some ophthalmologists from developed countries are performing ISBCS routinely.3 Finland is leading the way in performing ISBCS procedure, with 40-60% of patients undergoing ISBCS.4,6 In the Canadian province of Ontario, there was a consistent increase in the percentage of ISBCS for seven years from 2003-10. Similarly, Australia has also shown a rise in ISBCS over time.5 Despite the advantages, ophthalmologists in many developed countries, such as the United States of America and the United Kingdom, consider ISBCS only on selected patients and under exceptional circumstances, such as under general anaesthesia.7 A study in June 2020 collected data from the consultant members of the Royal College of Ophthalmologists (RCOphth, UK). Out of 130 participants, only 18(13.9%) performed ISBCS, while 4(3%) had stopped performing ISBCS. In contrast, 108(83.1%) had never performed ISBCS due to a variety of reasons.8 In the wake of the coronavirus disease (COVID) pandemic, ISBCS is gaining traction among healthcare providers. Service provision for elderly cataract patients, including multiple visits to the hospital for pre- and post-operative assessments, is being considered risky. RCOphth has constituted a special review team to develop guidance and to facilitate ISBCS.9

The most devastating theoretical risk of ISBCS is bilateral endophthalmitis, which may lead to severe visual loss, including blindness. To date, only four cases of bilateral endophthalmitis have been reported secondary to ISBCS.10 To reduce the risk of infection, ISBCS should be performed as two separate operations with appropriate aseptic precautions.11 In the developing world, the incidence of post-operative endophthalmitis after ISBCS varies, and is associated with the expertise of the operating surgeon and the surgical technique adopted.12,13 In China, the incidence varied between 0.01% and 0.06%.14,15 In Africa, the reported incidence ranged from 0.0% to 2.9% in Tanzania and Uganda respectively.16,17

To the best of our knowledge, there is no data on the frequency of endophthalmitis following ISBCS from Pakistan.  The current study was planned to assess the incidence of post-operative endophthalmitis after ISBSC at a tertiary care hospital in an urban setting.

The retrospective study was conducted at the department of surgery/section of ophthalmology, Aga Khan University Hospital (AKUH), Karachi, and comprised data of patients who underwent ISBCS between January 1, 2009, and December 31, 2018. After obtaining exemption from the institutional ethics review committee, the sample size was calculated using OpenEpi 3.01 with anticipated frequency of post-operative endophthalmitis after sequential bilateral cataract of 0.033% while keeping the level of significance at 5%, precision of 2% and a design effect of 1.18 Data of all consecutive patients who underwent ISBCS during the study period was subsequently accessed using the hospital’s coding system. Patients who underwent a planned additional procedure on the operated eye on the same day, such as phaco combined with vitrectomy, corneal graft, or glaucoma surgery, were excluded. Additionally, patients who had surgical complications at the time of surgery, such as posterior capsular rupture, or intraocular haemorrhage, were also excluded because the second eye surgery would have been deferred. Data of patients with incomplete medical records or with follow-up of <6 weeks was also excluded.

All surgeries had been performed by experienced faculty. A standard phacoemulsification procedure with implantation of an intra-ocular lens was performed. Patients received topical moxifloxacin at the end of the operation, and post-operatively. Intra-cameral antibiotics were not used.

The primary outcome measure was the incidence of post-operative endophthalmitis, defined as a red, painful eye with hypopyon and reduced vision at 6-week follow-up. Although primary outcome was assessed at six weeks, patients were followed up on multiple visits on day 1, week 1 and at the primary outcome visit. Slight variations existed between surgeons and in cases of patients from outside Karachi.

Data was first entered into Excel and was then analysed using SPSS 23. Frequencies and percentages were calculated for categorical variables, such as gender, age groups, post-operative complications and co-morbidities. Mean±standard deviation (SD) were reported for quantitative variables, such as pre- and post-operative SE and age. Chi-square test was used for categorical variables, while paired samples t-test was used for quantitative ones. P<0.05 was considered significant. 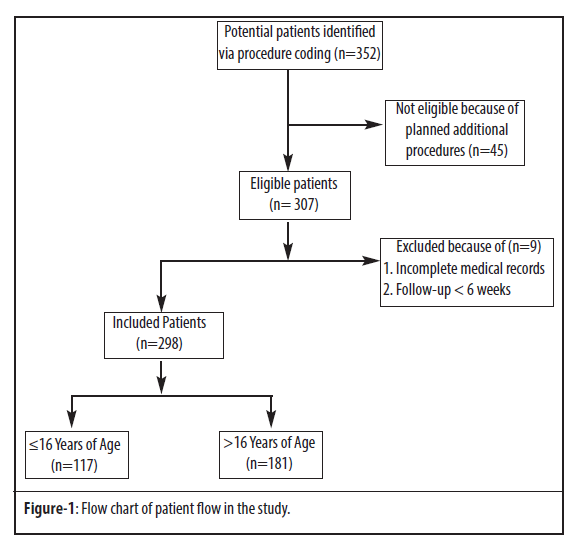 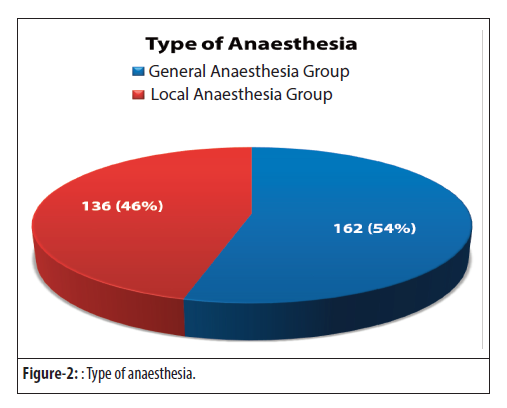 The type of anaesthesia given (Figure-2) and past medical history (Table-2) were noted for all (100%) patients.

Among the 596 eyes, there was no case of unilateral or bilateral post-operative endophthalmitis at 6-week follow-up. The best-corrected VA (BCVA) improved from -0.5650±8.2027 to -0.0043±4.05 (p=0.139). No patient developed cystoid macular oedema (CME), corneal decompensation, or intraocular haemorrhage.  Minor complaints were graded according to age groups (Table-3). 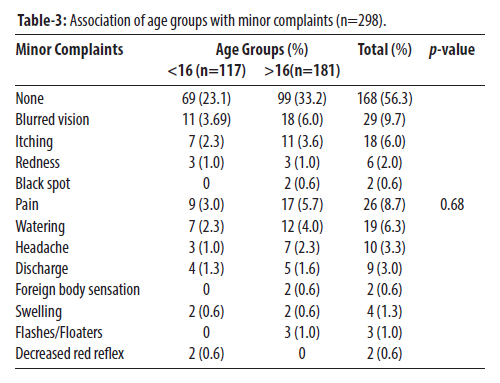 Furthermore, the incidence of post-operative endophthalmitis following ISBCS have also been reported.12,13

In order to reduce the risk of infection, ISBCS should be considered as two separate surgeries. The use of separate sterilised instruments, instrument trays, change of gloves, and gowns for each procedure is recommended. Patient selection is important11 and ISBCS should not be performed in high-risk conditions, such as diabetes mellitus, leukaemia/lymphoma, active adnexal and ocular surface infection, guttate, previous refractive surgery, pseudo-exfoliation, history of ocular trauma, previous iritis and glaucoma.3,6,23,26

Advantages of ISBCS include fast rehabilitation, reduced cost, fewer hospital/clinic visits, no anisometropia between surgeries, and only one general anaesthesia for those requiring it, such as paediatric patients.27 It is also beneficial for patient’s families and caretakers in terms of transportation and home-care.23 Similarly, pre-, intra- and post-operative resources can be used efficiently.23,28

More patients can be managed within a short time because only one pre-assessment and admission per patient is required.23,28 In 2009, around 10% of the members of the European Society of Cataract and Refractive Surgeons were performing ISBCS.4 In contrast, the American Academy of Ophthalmology does not support ISBCS.29

Moreover, ISBCS reduces expenses compared to DSBCS, which is beneficial for patients, their families and healthcare systems. A review conducted in Sweden reported that DSBCS is 14% more expensive than ISBCS.30 Similarly, a Finnish study said ISBCS was 849 Euros cheaper than DSBCS.31 A recent study reported that ISBCS may lead to around 16% reduction in the time taken to perform two cataract surgeries, suggesting that ISBCS could improve productivity, particularly as waiting lists grow following the pandemic-enforced lockdowns. Additionally, ISBCS can potentially reduce cost for public healthcare providers.32 It is essential to compare ISBCS and DSBCS as it will allow surgeons to devise a plan in a patient’s best interest. In future, ISBCS may be of more interest considering the success ratio of the procedure.26

In the current retrospective study, no patient developed unilateral or bilateral endophthalmitis, which may be due to meticulous case selection, thorough pre-operative asepsis protocols, and because surgeries were performed only by experienced surgeons. Precautions taken intraoperatively included complete segregation of the two procedures by using separate sets of drapes, gowns, gloves, and full-cycle autoclaved instruments for both eyes. Intra-operatively, care was taken to achieve good wound architecture, minimal tissue injury, and by ensuring leak proof incision closure.

The strengths of the current study include being the largest study on the subject from Pakistan, having high external validity with surgeries having been performed by multiple surgeons, and a low event rate despite the surgical settings being in a developing county. The major limitation of the study is its retrospective design. However, effort was made to minimise bias as data was collected prospectively.

ISBCS was found to be a safe procedure in selected patients undergoing surgery in a tertiary care setting in a low-middle income country (LMIC).

1.      Global initiative for the elimination of avoidable blindness. World Health Organization. Programme for the Prevention of Blindness and Deafness. [Online] 1997 [Cited 2019 December 01]. Available from: URL: https://apps.who.int/iris/handle/10665/63748.