Two cases of inflammatory myofibroblastic tumour (IMT) involving the genitourinary system are presented. One patient with mass of urinary bladder came in with lower abdominal pain whereas the second patient complained of right flank pain and investigations showed a mass involving the right kidney. At present, no specific guidelines exist for the management of inflammatory myofibroblastic tumours. In this case report, we will discuss the work-up and the management stratégies adopted for each case.

Inflammatory myofibroblastic tumour is a rare, benign, locally aggressive and inflammatory tumour, with low malignant potential which can involve any part of the body, usually presents in children or young adults.1,2 Symptoms and signs may vary according to the site of the tumour. These tumours are characterized by a proliferation of bland myofibroblastic spindle cells with fibromyxoid stroma having inflammatory cells like lymphocytes, plasma cells and/or eosinophils.2-5 The tumour also has a risk of local invasion and recurrence after surgical resection.4,6 The underlying cause is poorly understood. Inflammatory myofibroblastic tumour has been assigned many names including inflammatory pseudotumour, plasma cell granuloma, fibromyxoid pesudotumour and pseudosarcomatous myofibroblastic tumour.3,4,6 The most common site is the lungs, while extra-pulmonary IMTs are rare.3,6 According to a largest case series of extra-pulmonary IMTs, genitourinary IMTs comprised only 8 of the 84 masses (9.5%).3 While IMTs are very rare in retroperitoneum, constituting about 4.8% of extra-pulmonary tumours.3 The clinical manifestation of genitourinary IMTs differ according to their anatomic site. The most common manifestation is painless haematuria, pain at the site, frequency, urgency and systemic symptoms have also been reported.1,3

Case # 1: A 30 years old married female having five children, ECOG-0, presented to out-patient-department (OPD) at Sind Institute of Urology and Transplantation (SIUT), Karachi in April 2020 with complaints of lower abdominal pain for one year. A heterogeneous mass at the superior aspect of the urinary bladder was seen on ultrasound. Cystoscopy was done which showed a sessile growth of 3 x 3 cm on the dome of bladder so biopsy was taken. The biopsy report revealed fragments of bladder mucosa lined by intact mildly hyperplastic transitional lining epithelium with no dysplasia while underlying stroma showed moderate lymph-o-plasma cells infiltrates, at places, forming lymphoid follicles. Detrusor muscle bundles were not included. No evidence of granuloma or malignancy was seen. CT scan of chest-abdomen-pelvis with contrast was done which showed a heterogeneously enhancing lesion at the bladder dome measuring approximately 5.0 x 3.3 cm. The main tumour bulk was intraluminal. There was marked peri-lesional stranding and neo-vascularity. Multiple enlarged perilesional lymph nodes were also observed, one of them with central necrosis in right iliac fossa measuring 1.0 x 0.7 cm. Multiple enlarged para-aortic and aortocaval lymph nodes were also seen, one of them along the right iliac vessel measuring 1.0 x 0.7 cm (Figure 1). 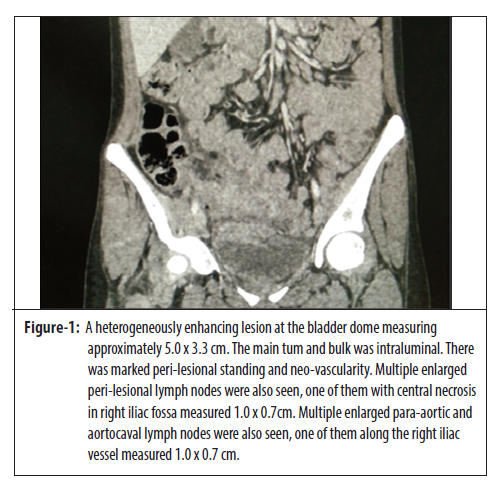 Patient underwent partial cystectomy with omphalectomy and lymph nodes dissection. Per operative findings showed bladder mass at the dome extending up to umbilical region involving rectus sheath, bowel and mesentery which were adherent around the mass in the whole length. The biopsy report revealed a benign lesion compromised of sheets and vague fascicular arrangements of bland spindle cells, at places, foci of storiform arrangements of these spindle cells area were also appreciated in the background of fibromyxoid stroma. Many intervening thick-walled, hyalinized blood vessels were also noted along with foci of dense lymph-o-plasma cell infiltrates. The lesion was also infiltrating the adjacent skeletal muscle bundles and adjacent fat. Microscopically, it was also infiltrating the detrusor muscle bundles of the urinary bladder, however, its mucosa was showing dense lymphocytic infiltrate. Bladder mucosal margins were unremarkable. No necrosis, mitosis, or nuclear atypia was seen. Sections from part of mesentery revealed fragments of fibro-adipose and fibro-collagenous tissue that were involved by a lesion having similar morphology as described above. A total of five lymph nodes were examined which showed 0/5 benign reactive changes with no evidence of tumour infiltration. The diagnosis of Inflammatory myofibroblastic tumour (IMT) of the urinary bladder was made. Immunostaining for Vimentin showed diffuse positivity in tumour cells and blood vessel walls. Immunostaining for Cytokeratin was completely negative. (Figure-2). 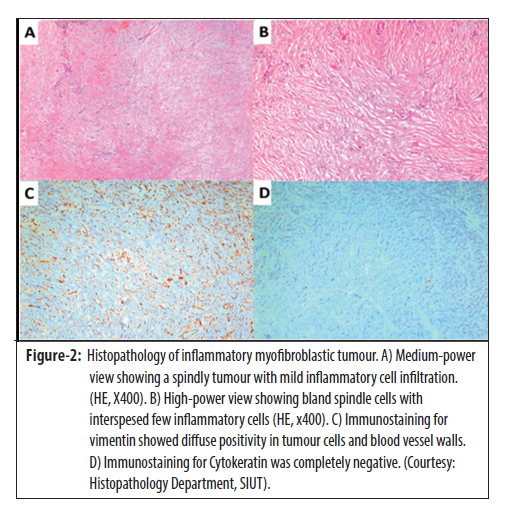 Case # 2: A17 years old male, ECOG-0 presented in OPD at Sind Institute of Urology and Transplantation (SIUT), Karachi in July 2019 with complaint of right flank pain for one month. A CT scan for the abdomen and pelvis with contrast was done which revealed a neoplastic mass involving the upper half of the right kidney with areas of necrosis and multiple specks of calcification without involvement of the renal vessels. It measured approximately 9.9 x 9.7 x 10.3cm (Figure-3). 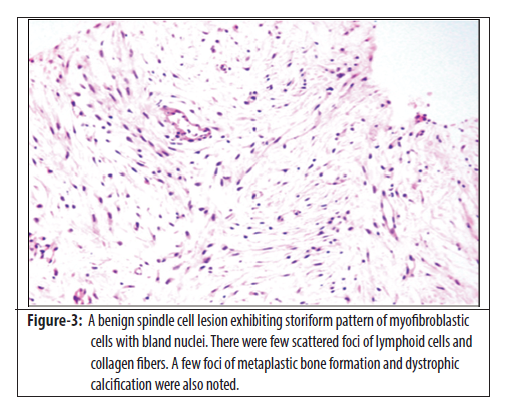 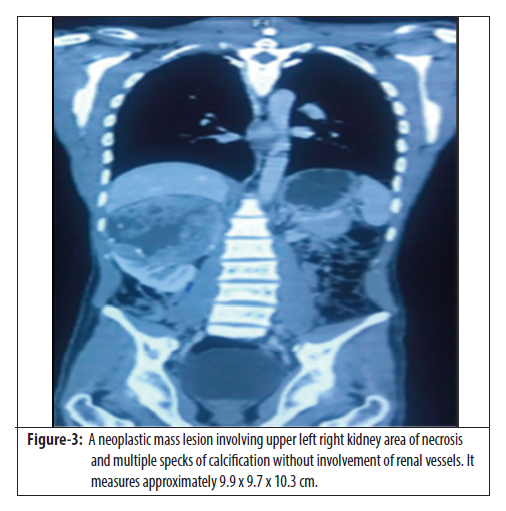 Immunohistochemical staining depicted Actin positive while Caldesmon and S-100 were negative. Hence the diagnosis of Inflammatory myofibroblastic tumour were made.

Inflammatory myofibroblastic tumour is a very rare neoplasm which usually affects children and young adults. It can affect any age group. It is extremely rare in genitourinary tract, with the most common site being the urinary bladder. The first case was reported by Roth in 1980.2,5,6 The essential criteria for the diagnosis of IMT are presence of spindle myoepithelial cell proliferation and lymphocytic infiltration.4 Three distinct patterns have been described according to histopathology: myxoid/vascular pattern, compact spindle cell pattern or hypocellular fibrous pattern.3,4 The origin of this tumour is not well understood but a report depicted that IMT is neoplastic because of the involvement of chromosome 2p23, cytogenetic clonality and its aggressive behaviour.4,5 Immunohistochemical staining may demonstrate positivity for anaplastic lymphoma kinase (ALK), vimentin, cytokeratin, and actin.5 ALK has been described as a good marker for IMT but lack of ALK does not exclude the diagnosis of IMT.3,5 Presently,there are no guidelines for treatment of these tumours, so according to the findings of similar case reports, bladder IMT can regress with medical therapy alone (COX-2 inhibitors with or without steroids).2,3 But if there is partial or no response after medical therapy surgical resection is an option. Partial cystectomy is a better option rather than radical cystectomy, depending on the size of the tumour followed by the periodic surveillance consisting of routine cystoscopy and imaging.3 In case of renal involvement, first case was reported in 1972 by Davides et al., as plasma cell granuloma.4 Diagnosis of renal IMT is usually made by surgical intervention. In our case of renal IMT, a confirmed diagnosis on biopsy and IMT had already destroyed the renal texture due to its large size. So, we did not give any medical therapy and opted for surgical resection. In 15% of cases sufficient material on trucut biopsy proved the diagnosis and these patients responded to corticosteroids. Biopsy of renal mass, Immunohistochemical staining and radiological investigation can help to differentiate renal IMT from other differential diagnosis like renal cell carcinoma RCC, leiomyosarcoma, rhabdomyosarcoma, neurogenic tumours, angiomyolipoma and xanthogranulomatous pyelonephritis.4 For example, S100 will be positive for neurogenic tumour; myogenin and Myo d1 in rhabdomyosarcoma and pan-cytokeratin in RCC.4 Angiomyolipoma of kidney is diagnosed by CT scan showing fat containing mass (-15 to -85 HU).4 Xanthogranulomatous pyelonephritis shows a “bear paw sign” on CT scan.4 Majority of the patients underwent partial or radical nephrectomy according to the size and site of mass. No recurrence of renal IMT was reported.

These two cases show a great diversity among genitourinary IMTs. It is poorly understood on molecular level. Clinical presentation, imaging, (cystoscopy in case of urinary bladder’s mass), biopsy and immunohistochemical staining of the tissue can help to diagnose, differentiate and manage the patient conservatively, with the help of medical therapy including cyclo-oxygenase (COX-2) inhibitors with or without steroids or surgically via resection. Failure of medical therapy warrants surgical resection/excision.

Consent Form: Consent was obtained from the patient (Case-1) and the parents of Case-2 for publishing the case reports.