Objective: To determine and compare the relationship between glycated haemoglobin level on admission and the angiographic thrombus burden in diabetic and non-diabetic patients with ST-segment elevation myocardial infarction.

Method: The cross-sectional study was conducted at the National Institute of Cardiovascular Diseases, Karachi, from June 2018 to July 2019, and comprised patients presenting with ST-elevation myocardial infarction. Demographic details and self-reported duration of diabetes was recorded. The thrombus burden was assessed on angiography classifying 0 = no thrombus, 1 = possible thrombus, 2 = small thrombus, 3 = moderate thrombus, 4 = large thrombus, and 5 = total occlusion. The data was analysed using SPSS 21.

Conclusion: Increased glycated haemoglobin level was found to have a positive correlation with thrombus score in both diabetic and non-diabetic patients.

Acute coronary syndrome (ACS) is generally classified into ST-segment elevation myocardial infarction (STEMI), non-STEMI and unstable angina. ACS as a whole carries a huge medical, economical and social burden around the globe.1,2 More than half of the mortality related with cardiovascular diseases (CVDs) is caused by ACS; mostly acute myocardial infarction (AMI).1 To enhance the prognosis, recognition of patients at the highest risk is necessary to provide specified management and tailored cure.3 Diabetes mellitus (DM) is included in the list of the most notorious risk factors for CVDs.

Compared to non-diabetics, it increases CVD risk up to eight folds in case with similar gender, ethnicity and age.4 Elevated glycated haemoglobin (HbA1c) levels and elevated blood glucose levels are associated with increased possibility of CVDs.5 However, the surge of catecholamine due to stress of AMI may cause hyperglycaemia.6 So, at an initial stage of AMI, serum glucose level is not a true indicator of glycaemic control prior to admission.7 On the other hand, HbA1c is less affected by the stress of AMI, as it denotes an average concentration of blood glucose over 8-12 weeks. Hence, the relationship between chronic control of blood glucose and clinical parameters of AMI patients is better evaluated by HbA1c levels. The American Diabetes Association (ADA) recommends the use of HbA1c in DM diagnosis.8 HbA1c levels should be <7% to decrease cardiovascular complications.9

Type 2 DM (T2DM) patients have increased thrombogenicity of blood, leading to increased complication rate and poor prognosis.10 Similarly, the thrombus is more in quantity, have lesser tensile strength and are more resistant to autolysis in T2DM patients.11 Even at the time of DM diagnosis, many patients have CVD signs on the background of longstanding insulin resistance (IR) and endothelial cell malfunction. This morbidity-mortality relationship starts in the initial stages of the disease process.12,13 STEMI patients with elevated HbA1c have a 1.25-fold fatality risk at 30 days and a 1.45-fold long-term fatality risk.14 Various studies have demonstrated a link between HbA1c rates and the incidence of coronary artery disease (CAD).15 In known diabetics, coronary heart disease (CHD) is typically detected at a late stage, but nothing is understood regarding pre-diabetes or asymptomatic undiagnosed diabetics.16,17

These observations in diabetic patients necessitate the diagnostic strategies to diagnose CAD at an initial asymptomatic stage that perhaps shows better anatomy of the coronary vessel. A few studies have been conducted to know about the correlation of HbA1c levels with the CAD severity, but data regarding the thrombus burden in diabetics and non-diabetics with STEMI is scarce. The current study was planned to investigate the association between on-admission HbA1c levels and angiographic thrombus burden in diabetic and non-diabetic patients undergoing primary percutaneous coronary intervention (PCI).

After taking informed consent from the participants, data was collected using a pre-designed structured questionnaire.  Patients were considered diabetic if already diagnosed or were found on arrival to be fulfilling the ADA criteria of DM diagnosis;12 HbA1c ≥6.5%, fasting plasma glucose (FPG) ≥126mg/dl, 2hPG ≥200 mg/dl, and symptoms of hyperglycaemia and random plasma glucose (RPG) ≥200 mg/dl. Typical chest pain for more than 30 minutes and ST-segment elevation of >1mm in 2 consecutive leads or presumed to be new onset of left bundle branch block (LBBB) was considered AMI. Primary angioplasty with or without stent was conducted without previous fibrinolytic therapy or platelet glycoprotein IIb / IIIa inhibitors to expand the infarct-related artery during AMI with ST-segment elevation within 90 minutes of door-to-balloon time, while taking G0 = no thrombus, G1 = potential thrombus, G2 = low thrombus with greatest dimension ≤1/2 vessel diameter (VD), G3 = mild thrombus with >1-2 VD, G4 = wide thrombus with ≥ 2VD, and G5 = vessel occlusion.

Data was analysed using SPSS 21. Descriptive analysis was done for numeric and categorical data. Chi-square test or fisher exact test was applied to assess the relationship between effect modifiers or confounding variables and the study outcome. P≤0.05 was taken as statistically significant. 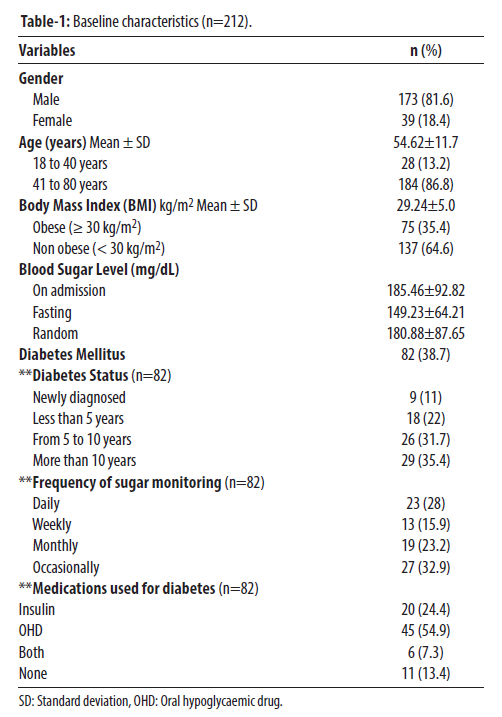 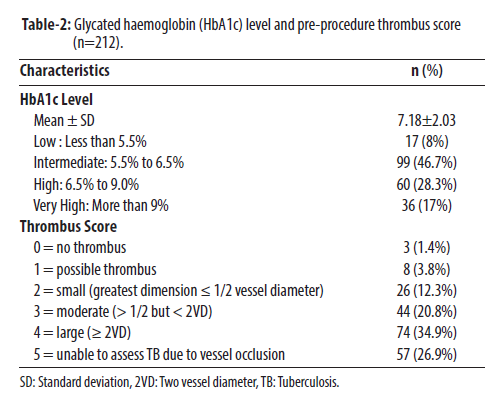 A significant relationship between glycated haemoglobin level and thrombus score was found in the overall sample as well as in diabetic and non-diabetic groups (p<0.001) (Table-3). 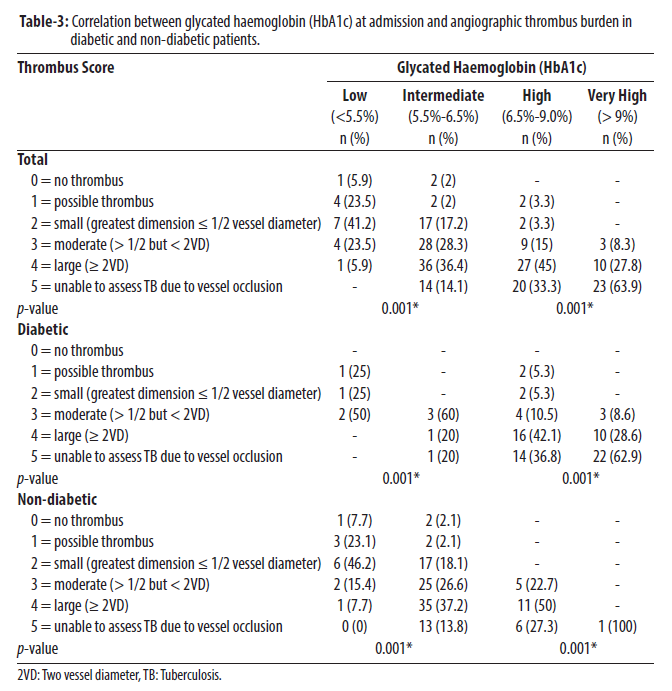 The present study showed that elevated as well as borderline or high normal blood sugar levels were also associated with increased predisposition to atherogenic load. An earlier study clearly indicated that increased thrombus ≥2VD grade is a significant independent predictor for major adverse cardiovascular event (MACE) and mortality.19 The current study indicated that 34.9% STEMI patients had grade 4 thrombus, and 26.85% had grade 5.

An elevated HbA1c level indicates hyperglycaemic state that causes injury to the endothelial cells. Hyperglycaemia enhances the production and release of endothelin and prostacyclin, and lowers the nitric oxide (NO)-based vasomotor control. Blood glucose is severely toxic to the endothelial cells and the repair capacity is impaired, leading to the injury of endothelial cells and promotion of atherosclerosis, and ultimately to MI. The current study showed that all patients with very high HbA1c level had thrombus grade 3 or more which further emphasises the importance of monitoring HbA1c levels and better glycaemic control.

Another research indicated that in non-diabetic patients with STEMI, pre-disruptions of blood glucose rates, as shown by elevated HbA1c, appeared to have reduced endothelial activity and increased inflammatory reactions during AMI. In fact, patients with elevated HbA1c level had significantly higher CVD risk. Significantly, difference in HbA1c level of 0.5% caused a four-fold rise in the incidence of MACE.20 In the current study, 46% patients undergoing primary PCI had an intermediate HbA1c level, 5.5-6.5%, at the time of admission, and there was an increase in the thrombus grade with a small rise in the HbA1c level. A study21 explored the correlation between elevated rates of HbA1c and coronary plaque symptoms in asymptomatic persons identified as non-diabetic. Unadjusted analyses found a favourable correlation between HbA1c levels and the amount of coronary segments (p<0.0001). The relationship persisted even though typical risk factors were taken into account.21 Measurement of HbA1c rates can also boost the risk evaluation of CVD in both diabetic and non-diabetic patients.

All these findings, which indicate elevated risks for glycaemic development and micro-vascular and macro-vascular problems in pre-diabetes, support the argument for early detection and early diagnosis of diabetes. Screening procedures for glycaemic conditions need to be streamlined such that patients can be detected faster and more efficiently.

Global rise in the prevalence of diabetes and pre-diabetes owing to behaviour and eating patterns are of special interest to cardiologists, and patient-care requires coordination between cardiologists and diabetologists.22 Original identification of pre-diabetes and adequate glycaemic regulation of diabetics can also include more accurate awareness of coronary lesions for revascularisation and for recognising individuals at the greatest risk of developing severe DM and CAD.10

The study has its limitations. The sample predominantly had male subjects because of the demographic profile of the admitted patients. Also, as all the subjects had proven CAD, which makes the findings valid only for the high-risk group. Also, the relatively small sample size was not able to determine the direction of the association between the elements that it explored. Finally, only one parameter was used to assess HBA1c and long-term effects as well as any factor that can affect the level were not taken into consideration.

Elevated HbA1c level was found to be significantly correlated with the risk of thrombus in both diabetic and non-diabetic patients with STEMI undergoing primary PCI. The correlation of HbA1c with cardiovascular risk after STEMI is clear prior to the onset of diabetes, indicating the need for more successful preventive interventions in patients at risk of cardiovascular disease.