Myocarditis is largely underdiagnosed due to subclinical symptoms and non-availability of diagnostic techniques necessitating high index of suspicion and early disease identification. This study aimed to assess the clinical presentation, cardiac magnetic resonance (CMR) imaging findings and prognosis of these patients. After reviewing the CMR data of Aga Khan University Hospital from January 2011 to December 2019, a total of 24 patients were included in the study with the confirmed diagnosis of myocarditis on CMR. Mean age was 33.4±15 years with the majority (58%) being male.

Dyspnoea was the commonest symptom seen in 15(62%) cases followed by chest pain in 13 (54%). On echocardiogram, 15 (62.5%) cases showed LV dysfunction. Common CMR findings were late gadolinium enhancement in 18 (75%) and bright T2 signals in 11 (45%) patients. With a mean follow-up of 3.6±2 years, one patient died of non-cardiac cause. Nine out of 14 patients (for whom repeat echocardiogram was done) had resolution of LV dysfunction suggesting favourable prognosis.

Myocarditis is an inflammatory condition of cardiac muscle caused by a variety of infectious and non-infectious aetiologies. Presentation of myocarditis ranges from mild fatigue and heart failure (HF) to cardiogenic shock and sudden death.1

Prognosis in myocarditis depends on multiple factors, including clinical presentation, non-invasive parameters, serology, and/or histopathology.3 There is little data available on this disease from Pakistan. This study aimed to assess the clinical presentation, findings of cardiac magnetic resonance (CMR) imaging and the prognosis of patients with myocarditis in our population.

This study was approved by hospital’s ethical review committee (ERC No: 2019-1939-5249). We retrospectively reviewed cardiac magnetic resonance (CMR) imaging data of AKUH from January 2011 to December 2019 and included the patients with the diagnosis of myocarditis on CMR. A pre-designed data collection form was filled for each patient after reviewing the medical records. Data was analysed using SPSS version 22. CMR was performed on a 1.5-Tesla Siemens Avanto.

A total of 44 patients were referred for CMR with the clinical suspicion of myocarditis. Of these, 24 (54.5%) patients had CMR findings consistent with myocarditis. The patients were diagnosed as per the Lake Louise criteria (LLC).4 Endomyocardial biopsy is considered the gold standard for the diagnosis of myocarditis. However, the biopsy has low sensitivity due to focal nature of the disease and being an invasive procedure it carries potential risk of complications. It should be reserved only for cases for which active myocarditis is being considered and if a specific diagnosis would influence therapy.5 Due to these limitations, the endomyocardial biopsy was not considered in our patients. Moreover, applying the LLC criteria approaches a sensitivity of 67%, specificity of 91% for the diagnosis of biopsy-proven myocarditis, and achieves an accuracy of 78% with further improved diagnosis if all three parameters are present.4,6

Of the 24 patients confirmed to have myocarditis, the mean age was 33.4±15 years with 14 (58%) being males. The most common symptom at presentation was shortness of breath in 15(62%) patients followed by chest pain in 13(54%) with many patients having a combination of symptoms. 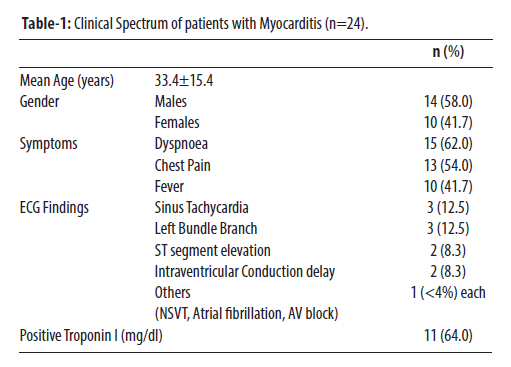 Most of the CMR studies (n=14, 58%) were performed within a month of the development of symptoms. 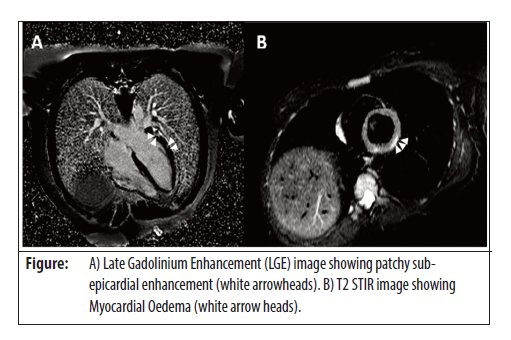 On CMR (Figure) the most common finding supporting myocarditis was late gadolinium enhancement (LGE) seen in 18 (75%) cases. Of these, subepicardial enhancement was seen in 12 (50%) patients, whereas enhancement in mid myocardium was seen in 4 (16%).  Bright signals on T2 weighted images corresponding to myocardial oedema were seen in 11 (45%) cases. (Table-2). 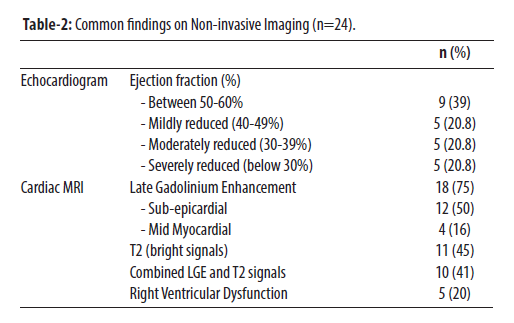 The patients were followed for a mean duration of 3.6+ 2.0 years. Three patients were lost to follow-up. One patient expired due to non-cardiac cause. Only six patients required hospitalisation for heart failure. Sustained ventricular tachycardia was seen in one patient. Of those who had LV dysfunction, 9 (60%) had resolution of their ejection fraction during follow-up. Beta blockers and angiotensin converting enzyme (ACE) inhibitors were commonly prescribed medications to patients with LV dysfunction.

Myocarditis is an underdiagnosed and under-treated condition. Some cases are subclinical making the diagnosis further difficult. This necessitates high index of suspicion and early identification for which the knowledge of common modes of presentation of this disease is important. In our study, majority of the patients were young which is in accordance with the data from other countries and indicates that myocarditis usually affects young people.

Myocarditis has a wide range of presentation. In our study, the most common symptom at presentation was shortness of breath and no patient had cardiogenic shock which may be due to a selection bias as these patients usually die early before CMR.

Although uncommon, patients with myocarditis may present with life-threatening arrhythmias. Ventricular arrhythmias are more commonly associated with sinister pathologies like giant cell myocarditis.4 In our study, sustained or non-sustained ventricular tachycardia and atrial fibrillation were observed in a small number of cases. This indicates that the majority of cases of myocarditis in our population are of less severe nature which is in accordance with the international data.

Elevated cardiac troponins are established sensitive and specific markers of myocardial injury. However, myocarditis may occur in the absence of troponin elevation. More than half of our patients had positive troponins. High troponins also correlate well with reduced LV function during the clinical course.5

Generally, myocarditis is a mild and self-limited consequence of a viral infection. Up to 20% of myocarditis patients may subsequently develop a chronic inflammatory dilated cardiomyopathy.6 According to myocarditis treatment trial, the adult patients with heart failure symptoms and a left ventricular ejection fraction less than 45% at baseline have a four-year mortality of 56%.  But this was before the use of β-blockers and with better medical treatment the prognosis might have improved in the current era. In our study, around half of the patients had ejection fraction of <40% but the mortality was quite low. This might be due to early recognition and appropriate management with beta blockers and ACE inhibitors.

Nowadays, myocarditis is largely diagnosed on CMR findings which include myocardial oedema and late gadolinium enhancement. However, these parameters are more helpful in the earlier course of the disease. In our study, most of the CMR studies were either performed within a month or between 1-3 months of the onset of symptoms. Newer CMR imaging techniques, e.g. T1 mapping, have the highest diagnostic accuracy. Greater values of T1 and T2 may be seen with acute inflammation than with sub-acute inflammation.2 Unfortunately, we could not do the T1 and T2 mapping due to unavailability of the software.

In a recent study, the strongest independent predictor for an increase in baseline LVEF was regional and/or global oedema.9 In our study, myocardial oedema in the form of bright signals on T2 weighted images was present in 45% of cases. In those who had LV dysfunction, majority had resolution of their ejection fraction during follow-up.

The good prognosis in our study may be due to proper detection of myocarditis with the help of CMR and timely institution of appropriate medical treatment. However, the other reason may be selection bias as more severe cases probably die early before CMR.

Myocarditis usually affects younger people with dyspnoea being the most common symptom. Ventricular tachycardia is relatively uncommon. Most patients have LV dysfunction on transthoracic echo or CMR. On CMR, late gadolinium enhancement is the most common finding followed by bright signals on T2 weighted images. The overall prognosis is not bad with a favourable long-term survival. However, early detection and appropriate management is necessary.

The limitation of the study is that data was not collected to look for the specific aetiologies of myocarditis in this patient population.

Post-traumatic arteriovenous fistulae of the extremities: A case series