Traumatic oral injuries present their own unique restorative challenges to the clinician due to their variable clinical presentation. In such cases, achieving optimum aesthetics and function in the maxillary aesthetic zone is challenging. This case report describes the rehabilitation of a patient with immediate implant placement after suffering trauma to the oral cavity resulting in a complete loss (avulsion) of a permanent central incisor tooth. In order to preserve the existing soft and hard tissue and to achieve predictable and aesthetically pleasing results, we decided to place an immediate implant as opposed to replantation of the avulsed tooth. Flapless implant surgery was planned and a dental implant (Bio horizons Implant Systems, Inc.) was placed following non-submerged protocol. At six year follow-up, the clinical and radiographic examination revealed a well osseo-integrated implant with an intact buccal cortical plate. No clinical and radiographic signs of peri-implant disease were noted on follow-up. This case report supports the fact that immediate implant placement for missing teeth in the aesthetic zone results in favourable outcomes both in terms of function and aesthetics.

Traumatic oral injuries are one of the most common presentations at hospital emergency departments. The rehabilitation of such traumatic injuries requires a multidisciplinary approach of dentists and medical physicians.1 The most common site that is predisposed to trauma is the anterior maxilla because of its anatomical position.2 The clinical presentation of traumatic dental injuries is very diverse, ranging from a simple crown fracture to complete separation of teeth from the oral cavity. Among these injuries, “Avulsion” is a severe form of traumatic oral injury in which the tooth is completely separated from the oral cavity, resulting in tooth loss.1 There are several management options for avulsed teeth such as replantation of the avulsed tooth, prosthetic restoration of  a lost tooth by minimal preparation bridges, conventional fixed bridges, removable partial dentures, and dental implant placement.3 However, for the selection of an appropriate treatment plan, a detailed clinical and radiographic assessment is of paramount importance to achieve favourable outcomes.2 Prosthetic rehabilitation of avulsed teeth in the anterior maxilla is a challenging task for the clinician because of high aesthetic demands and uncertain prognosis of the replanted teeth.2

A 42-year-old lady was referred from the emergency department of a tertiary care hospital to the Dental clinics of Aga Khan University Hospital, Karachi in January 2015 with the history of trauma to the oral cavity 24 hours ago. She lost her one permanent maxillary incisor as a result of injury to her oral cavity. On clinical examination, tooth #21 was missing and tooth #22 had a complicated crown fracture (Figure-1). 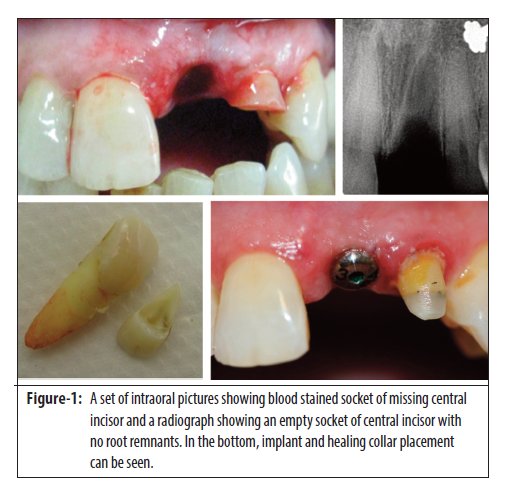 On radiographic examination, it was noted that tooth #21 was completely knocked out of its socket with no remaining root fragments and tooth #22 was fractured (Figure-1). The avulsed tooth was not stored in the proper storage medium and was kept dry for the last 24 hours (Figure-1). After detailed clinical and radiographic examination, it was decided to immediately place implant #21. The treatment plan was explained to the patient and informed consent was obtained from patient before any dental treatment.

Under local anaesthesia (2% Xylestine 1:80,000) a flapless implant surgery was initiated. The osteotomy was prepared and a 3.8 mm×10.5 mm implant (Biohorizons Implant Systems, Inc.) was placed with the primary stability of 30 Ncm. Non-submerged protocol was followed and healing collar was placed at the same visit (Figure-1). After 2 weeks, the patient was examined for any uneventful healing.

After three months, the patient was recalled and a periapical radiograph was taken. The radiograph showed an integrated implant with no associated pathology. The prosthetic restoration phase was initiated by placing a Biohorizons titanium abutment and obtaining a final impression with additional silicone impression material. A cement retained permanent implant crown was fabricated in a laboratory. The permanent implant crown was cemented with glass ionomer cement and excess cement was removed. At follow up periods of six month and six year, a periapical radiograph and CBCT was taken, which showed a well -integrated implant and intact buccal cortical plate. No clinical and radiographic signs of peri-implantitis were noted. (Figure-2&3) 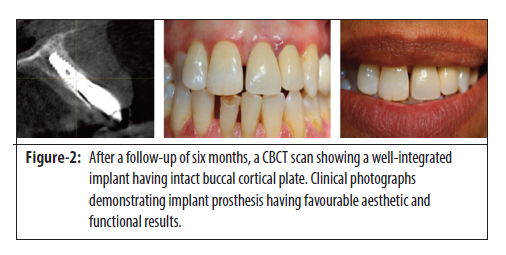 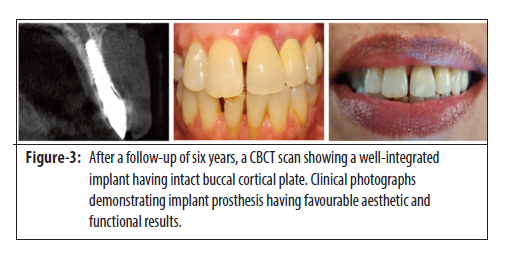 The restoration of missing teeth in the maxillary aesthetic zone is a clinically challenging task for the dentist. This case report describes the immediate implant placement as a viable treatment option for the replacement of avulsed teeth. Replanting the avulsed tooth back in its socket has uncertain long term prognosis.4 The success of the replantation of an avulsed tooth is variable and depends upon several factors like extra oral dry time, storage medium, and the stage of root development. An extra oral dry of 20-60 minutes is critical for the vitality of periodontal ligament cells, after this time period the periodontal ligament cells start losing their vitality and get necrosed.5 The most common complication after replantation is replacement resorption in which the root of the tooth is replaced by bony hard tissue.6 This bony fusion, especially in growing children, diminishes the normal dento alveolar growth and creates a vertical growth deficit resulting in infraocclusion of the tooth.7 In this case report, the avulsed tooth was not preserved in a suitable storage medium rather it was kept in a dry environment, which  could have substantially affected the long term prognosis of the tooth, if replanted. Keeping in mind the extra oral dry time and to preserve the existing volume of soft and hard tissue, we decided to place an immediate implant as opposed to the replantation of the avulsed tooth.

In today’s era of modern dentistry, scientific studies have concluded that dental implant therapy for replacement of missing teeth provides predictable outcomes. Immediate implant placement has several advantages over the conventional delayed implant placement as it shortens the treatment duration and preserves the existing soft and hard tissues.8 However, treatment planning for immediate implant placement in the maxillary anterior zone is technically demanding as it requires careful assessment of factors such as buccal plate thickness, root length, sagittal root position, and gingival biotype.8 The clinical guidelines suggest an adequate amount of buccal plate thickness i.e.  at least 2 mm will avoid complications like buccal plate perforation and dehiscence, which significantly affect the success of implant therapy.8 Moreover, as the patient was an adult, one could expect no further potential for jaw growth, implant placement was considered as the most optimal option for the replacement of the avulsed tooth.2

Flapless implant surgery was employed in this clinical scenario in contrast to open flap implant surgery. This approach is beneficial as it results in minimal trauma to the soft tissue and reduces the risk of postoperative peri-implant tissue loss.10 However, one of the most major drawbacks of this technique is that the true morphology and contour of underlying alveolar bone cannot be visualised which increases the risk for complications like buccal plate perforation, dehiscence etc.10 Alveolar bone receives its blood supply from three sources mainly i.e. periosteum, periodontal ligament and endosteal blood supply. Following tooth loss, the blood supply from the periodontal ligament diminishes, the remaining two sources maintain the blood supply to the native bone. However, during flap elevation for implant placement, the mucoperiosteum is stripped from the underlying bone, which further compromises the blood supply of the bone. This implicates a certain level of bone resorption after mucoperiosteal flap elevation.10

Traumatic oral injuries must be timely managed, and preservation of existing natural dentition is the primary role of dentists. Teeth that are lost due to trauma significantly affect the function and facial aesthetics. Thus, a long-term and predictable treatment option should be considered. Immediate implant placement after avulsion is a treatment modality that gives stable long term functional and aesthetic results as reported in this case report.

One of our potential limitation was the delayed submission of this case report to the scientific journal. The reason behind this was that the authors wanted to document and report a longer follow up period i.e six years.