We present an unusual case of positional syncope occurring years after pacemaker implantation. Syncope was caused by a pacemaker lead fracture, which resulted from subclavian crush syndrome. The syncope occurred incidentally during hospital admission and was timely diagnosed using an integrated approach of history taking, examination findings, device interrogation and radiographic parameters. The patient subsequently underwent lead and device alteration which led to resolution of her symptoms.

Pacemaker devices represent cornerstone therapy for the management of symptomatic bradyarrhythmia. These device systems involve transvenously placed endocardial pacing electrodes which have an overall excellent track record of performance and safety. However, post-device implantation complications can occur and lead to significant morbidity and mortality in selected group of patients. Syncope is often a mysterious diagnosis with a multitude of differentials. Cardiac causes of syncope incur a significant mortality risk.1

Patients with pacemakers can develop syncope because of device or lead system malfunction.2 Lead failure especially lead fracture which can occur due to long-term lead entrapment at the tight thoracic outlet, should always be considered in pacemaker patients presenting with intermittent symptoms and positional syncope. Establishing an accurate diagnosis and instituting effective corrective measures involving acquisition of new pacing systems is essential.

A 60 year old lady with longstanding hypertension and prolonged morbid obesity, presented at National Institute of Cardiovascular Diseases, Karachi, Pakistan in the month of April 2020. She had a history of a single chamber ventricular permanent pacemaker implantation seven years ago for symptomatic complete heart block. The pacemaker device was examined eight months ago and was functioning appropriately. She was admitted in general cardiology ward with hypertensive heart failure symptoms and was stabilised with medical therapy. The 12 lead ECG showed normal pacing function at a lower pacing rate of 60 beats/minute and echocardiography revealed mild left ventricular hypertrophy with LV ejection fraction of 60%. Routine blood work up was unremarkable.

On the third day of hospitalisation she had an episode of brief convulsive syncope early in the morning, while she was sitting up in bed. The patient’s pacemaker device was examined at bedside; battery voltage and lead impedance were normal, bipolar pacing threshold was noted to be slightly higher at 1 Volt at 0.4 msec. pulse width as compared to the last observed pacing threshold of 0.5 Volt at 0.4 msec. and sensing could not be evaluated because of pacemaker dependency. Interestingly, when the patient sat up in bed to give her history, she complained of dizziness and it was noted on the bedside monitor that there was an intermittent high grade AV block with loss of pacing. This was resolved by lying down along with the resumption of ventricular pacing.  Lead failure was suspected.

Bedside provocative manoeuvres to assess for lead fracture, like left arm abduction was positive for intermittent ventricular over-sensing with inhibition of pacing (Figure-1). 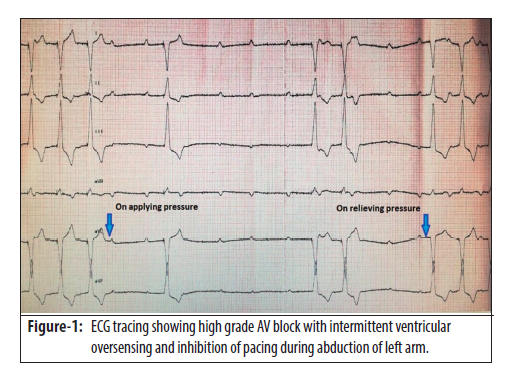 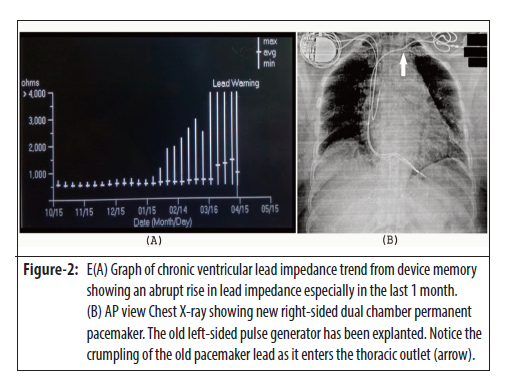 Chest X- ray did not reveal any obvious lead integrity issues, other than slight lead crumpling at a medial vein entry site (Figure-2B).

The patient was scheduled for dual chamber pacemaker implantation with new leads. Left upper extremity venography revealed an occluded left subclavian vein from the prior lead implant. A new dual chamber pacing device (Sensia DR SEDR01, Medtronic Inc.) with new screw-in, bipolar right atrial and ventricular leads were implanted via an axillary vein approach from the right side. The old damaged left-sided pacemaker lead of the previous implant was not explanted. It was abandoned, capped and retained in pocket (Figure-2B). The patient was discharged the following day. She was doing well at 1 month follow-up.

Permanent pacemakers have a central role in the therapy of symptomatic bradyarrhythmias. Syncope is a symptom with a myriad of causes. Cardiac causes of syncope portend a poor prognosis and are associated with high mortality.1 Syncope in patients with permanent pacemakers may be due to neuro-cardiogenic vasodepressor syncope, haemodynamically significant supra-ventricular or ventricular arrhythmias or due to dysfunction of the device system involving the battery or leads. Pacemaker leads are considered the weakest link in these device systems and are prone to lead insulation breaches or lead conductor coil fractures as long term complications.

The subclavian vein is the preferred access for inserting pacing leads because of higher success rate and lower risk of immediate complications. Lead inserted via the subclavian approach usually traverses through a tight space bordered by a musculo-tendinous complex before entering the thoracic outlet, which comprises of the subclavius muscle, the costo-clavicular, and costo-coracoid ligaments.3 The sterno-clavicular joint in this neighbourhood is a saddle joint between the sternum and the shoulder-arm complex, which takes active part in movements of the pectoral girdle. It is this unfavourable location in which the pacemaker lead may get entrapped and be subjected to a pincher-like action associated with arm and shoulder use resulting in constant wear and tear. In a few patients, this fulcrum point can result in subclavian-crush syndrome leading to injury to the lead, and causing lead insulation break or lead fracture. Magney et al showed in anatomical studies in cadavers that it was not the friction motion caused by the clavicle and first rib, rather it was lead entrapment in these soft tissue structures that resulted in lead damage.4 This need to be differentiated from Thoracic Outlet Syndrome (TOS) which presents with neurological signs and symptoms (95%). Remaining patients present with venous symptoms (2-3%). Arterial symptoms are the least common. In our case, because of a very medial subclavian venous access at the initial implant, there was entrapment of the pacemaker lead at the musculo-tendinous complex at the thoracic outlet leading to chronic lead damage, and the patient had no arterial symptoms. The term thoracic outlet is used in the discussion refers to an anatomic landmark rather than dealing with a case of TOS per se. In clinical practice, at the time of pacemaker implantation and accessing the veins to enter the heart, it is especially important to ensure a lateral entry into the veins to avoid the long-term effects of chronic lead impingement and wear and tear of the lead. Accessing the cephalic or axillary veins significantly mitigates this complication as compared to very medial subclavian vein access. Byrd has described a more lateral approach by aiming the first rib for access to the subclavian vein.5 This technique or an axillary vein approach or cephalic vein cutdown as more lateral approaches to enter the subclavian vein, mitigate the risk of long-term lead damage.6 A meta-analysis demonstrates lower risk for pneumothorax and lead failure associated with cephalic vein cutdown as compared to subclavian puncture. Cephalic vein cutdown should constitute the preferred venous access.7 There is no head to head comparison of pacemaker implantation complications between right vs left-sided implantation. Implants from either side roughly have comparable complication rates. Generally, the pacemaker implantation is preferred on the contralateral side of hand-dominance i.e. left sided implantation in right-handed individuals.

The incidence rate of pacemaker lead fracture is approximately 1.2% per patient year and is largely under-reported.8 Patients predisposed to lead fracture are usually young with their age being less than 50 years,9 those who perform intense physical activity, women and people with higher left ventricular ejection fraction. There is no superiority of current co-axial multifilar bipolar pacemaker lead design to long-term durability or predisposition to lead failure.10

Symptoms of lead fracture depend on patients underlying pacemaker dependency and include dizziness, lethargy, syncope or pocket stimulation. The patient may be asymptomatic and lead fracture may go unrecognised. ECG may reveal failure to pace or inappropriate sensing. The make or break nature of lead fracture may only be evident with provocative measures, e.g. during ipsilateral arm abduction. Imaging studies to identify lead integrity may reveal localised area of disruption or frank lead breakage at entry site of the lead. The measurement of lead circuit impedance by a pacemaker programmer can reveal a marked sudden increase in impedance values, normal range being between 300 - 1000 ohms. Treatment of lead fracture involves the placement of a new lead with or without extraction of previous lead. The extraction of the old lead should be individualised considering the risk- benefit ratio involved with an invasive lead extraction procedure.11

Because there was no direct cause of the lead fracture in our patient like trauma or heavy weight lifting, we concur that the fracture was the result of chronic lead entrapment because of a very medial insertion of the lead and possibly the perpetual effect of patient’s body weight.

We would consider our patient very fortunate as firstly, a swift diagnosis of syncope was achieved and secondly, the fortuitous timing of her symptom of syncope in the hospital and with immediate medical attention she was saved of any further untoward consequences.

This case highlights the value of an integrated approach to pacemaker troubleshooting in the evaluation of history of syncope in a pacemaker patient. This approach included clues from history of syncope being intermittent and posture-related, physical findings including device-pocket provocative manoeuvres, a thorough device interrogation including chronic lead impedance trends and radiology for the gross assessment of lead integrity.  Consent for publication: The corresponding author had a written consent of the patient to use the data for publication.