Inflammatory bowel disease (IBD) is a complex inflammatory disorder of the bowel, having chronic remitting and relapsing course. Very early onset IBD (VEO-IBD) is defined as ulcerative colitis (UC) or Crohn’s disease (CD) in children aged <6 years.1 VEO-IBD is considered in the investigation of rare monogenic disorders, which is less common in older patients.2 The exact cause of VEO-IBD is unclear, but genome-wide association studies (GWAS) and monogenic IBD studies have shown a significant genetic component responsible for VEO-IBD and more than 50 genetic mutations have been discovered.3

Children with VEO-IBD mostly present with isolated rectal bleeding in addition to symptoms like abdominal pain, diarrhoea and growth failure.4 Monogenic IBD has symptoms of underlying conditions, like hypoglycaemia and hepatomegaly in GSD1b, thrombocytopenia and eczema in Wiscot Aldrich syndrome (WAS), albinism in Hermansky-Pudlak syndrome, defective natural killer (NK) function in nuclear factor kappa B (NF-κB) essential modulator deficiency (NEMO) and recurrent deep-seated abscesses and sinu-pulmonary infections in chronic granulomatous disease (CGD).5 Fistulising peri-anal disease is one of the early presentations of monogenic IBD. The overall disease course of VEO-IBD is often more severe in monogenic than non-monogenic form and can result in substantial long-term morbidity because it affects nutrition, growth and psychological well-being of the affected children.6

The basic workup is the same as for paediatric or adult onset IBD, including inflammatory markers, albumin level, stool complete examination and faecal calprotectin. The disease is characterised by pan-colitis in both CD and UC, and at the time of diagnosis up to 89% of children have colonic involvement on endoscopic and histopathological examination.7 A proportion of monogenic IBD children have underlying primary immunodeficiency states, therefore, screening with immunoglobulins T and B subsets, and dihydrorhodamine flow cytometry are the least required tests. Molecular genetics is a great help in narrowing the diagnosis at least for monogenic disorders.8 There is no consensus on the management of these children and majority of them do not respond to conventional management. Biological therapy and stem cell transplantation have a role in monogenic VEO-IBD and earlier institution might be more helpful. Fistulising disease or severe colitis may end up in surgical intervention. The current study was planned to describe the varied clinical spectrum, underlying monogenic disorders and outcome for VEO-IBD in Pakistani children.

The prospective inception cohort study was conducted at the Gastroenterology Department of the Children's Hospital, Lahore, Pakistan, from January 2017 to December 2018. An inception cohort study is defined as group of individuals identified and assembled for subsequent study at an early and uniform point in the course of the specified health condition; e.g., near the onset (inception) of symptoms, soon after diagnosis, at detection of a clinically significant pathological event etc.9,10 The sample size was not calculated.

After approval from the institutional ethics review board, informed written consent was obtained from guardians/parents of children. They were categorised as IBD cases (CD / UC or indeterminate colitis) using the modified PARIS classification.9 The diagnosis of VEO-IBD was made on the basis of clinical history, physical examination, endoscopic appearance and histological findings. VEO-IBD was defined as age <6 years or diagnosed at age >6 years but symptoms had developed at age <6 years. Children with allergic disorders, autoimmune enteropathy, infectious enteritis or colitis during the initial workup for any suspected IBD case were excluded, and so were those who had developed IBD at age >6 years. 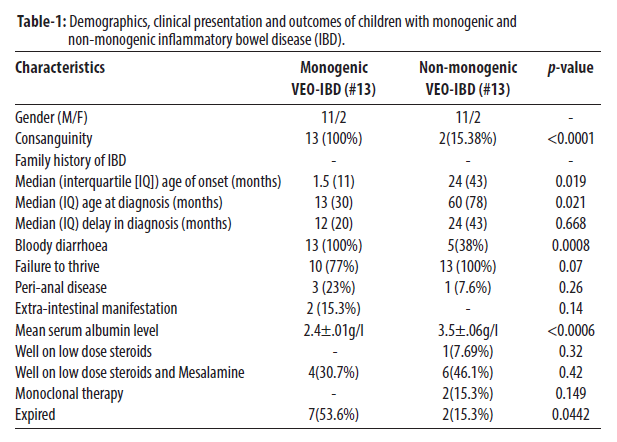 All patients presented with chronic diarrhoea containing blood or mucus, non-bloody diarrhoea and a considerable number of children had failure to thrive (Figure-1). 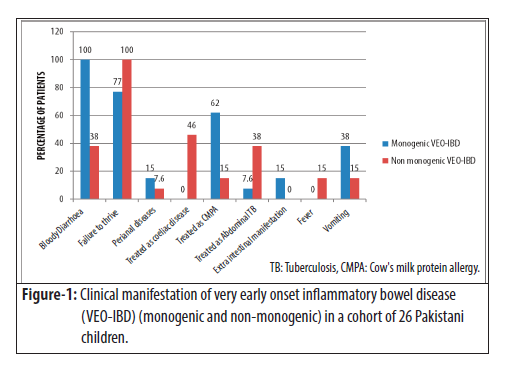 Peri-anal disease and fistulae were seen more in monogenic cases than non-monogenic (Figure-2). 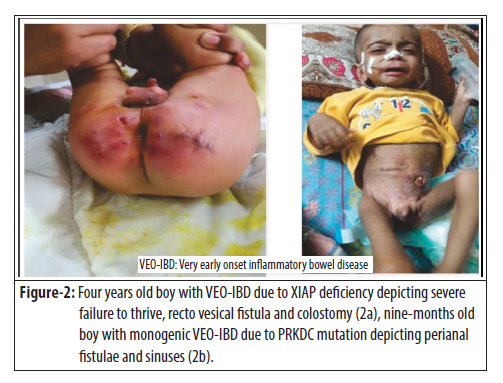 Only albumin and IG levels were significant in terms of difference between monogenic and non-monogenic IBD cases (Table-2). 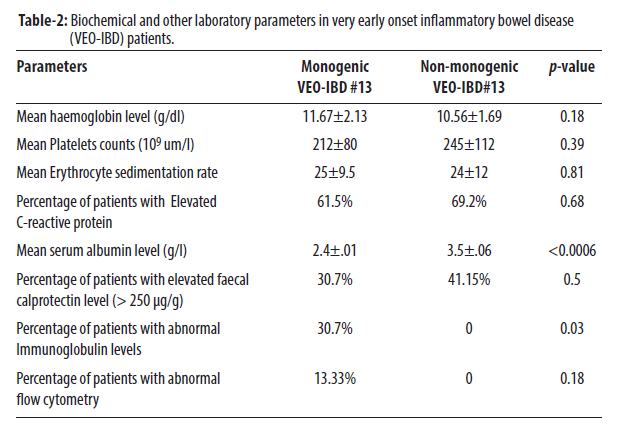 Almost all these children (100%) had moderate to severe colitis on endoscopic examination with histopathological findings typical of IBD (Figure-3). 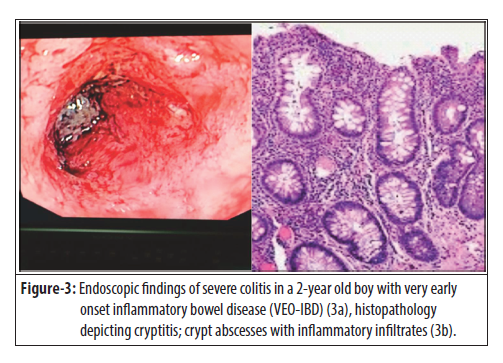 The children were stabilised with standard induction therapy with steroids (oral / intravenous [IV]) in addition to supportive measures in the form of fluids, antibiotics, albumin and blood transfusion, if required. Children who had remission were continued with tapering dose of steroids and a maintenance drug in the form of either mesalamine or azathioprine was initiated. Among the children, 2(7.69%) were put on monocloncal therapy and 2(7.69%) underwent surgical intervention. Iron therapy and vitamin supplements were advised and they were called for 2 monthly follow-ups.  Mortality was significantly higher in the monogenic group 7(54%) than in the non-monogenic group 2(15%) (p<0.05).

Paediatric IBD has a rising trend not only in the developed world, but also in the low- and middle-income countries (LMICs), including those in the Middle East and Asia.11,12 In the last couple of decades, there has been a 30% increase in paediatric onset IBD and highest change in incidence was observed in early onset IBD (7.5% per year).13 The increased incidence is probably due to more awareness and with the availability and often use of immuno-genetic testing. Exact incidence of this condition is not known in Pakistan due to lack of epidemiological studies and registries. VEO-IBD is a distinct entity from adult IBD in reference to location of disease and extension of disease over time, and is often difficult to treat.13 There is a known male gender predilection in VEO-IBD which is similar to the current study.14 Consanguinity and family history is a strong predictor of VEO-IBD, especially in monogenic form. Consanguinity was present in all of our children in the monogenic form, but only in a few in non-monogenic form, but none of them had a positive family history of IBD. This is in contrast with published data which reports 44% positive family history for IBD in cases of VEO-IBD.15,16

Diagnosing VEO-IBD is quite a challenging task for the treating physician. The presentation is no different from paediatric onset IBD as invariably these children have bloody diarrhoea and failure to thrive. Peri-anal disease is another presentation even sometime before the development of frank bleeding. In the current study also, majority of children presented with bloody diarrhoea, failure to thrive and peri-anal disease. Monogenic IBD had an early and severe presentation in infancy compared to non-monogenic IBD in the current study, which is consistent with literature.17 To suspect VEO-IBD, other common mimickers must be addressed and managed accordingly. This might be the reason for delay in referral or diagnosis. All the cases in the current study had delay in diagnosis and they were being treated previously as infectious colitis, cow's milk protein allergy (CMPA), lymphonodular hyperplasia, eosinophilic colitis, abdominal tuberculosis (TB) and coeliac disease. Extra-intestinal features, like arthralgia, arthritis, skin and eye involvement, have been reported in literature up to 28% of VEO-IBD patients.18 Two of our cases (DOCK-8, RAG-1) had transient skin involvement in the form of erythematous maculo-papular rash. None of the other children had any extra-intestinal manifestations.

The laboratory parameters which are helpful in VEO-IBD include inflammatory markers, like CRP and ESR, which are usually raised as in most cases of paediatric IBD, particularly CD. In addition to the inflammatory markers, CBC, serum albumin, serum IG and lymphocyte subsets, faecal calprotectin and stool microscopy and culture are other baseline tests required in these patients. In the current study, serum albumin was significantly low in monogenic form (p<0.0006). Faecal calprotectin was elevated in the non-monogenic form but not significantly (p>0.05), which is similar to international literature.19,20 Serum IGs were supportive in the monogenic form, but the lymphocyte subset was not very helpful with non-significant value.

There are clear recommendations to perform upper and lower gastrointestinal endoscopy with histological examination by an experienced histopathologist in addition to small bowel imaging sutdies.21 Endoscopic examination is helpful in determining the extent of disease, stricturing element and differentiation between UC and CD. Histological findings, like mucin depletion, epithelial irregularities, crypt distortion, branching, atrophy and granulomas, if any, should confirm the disease.22 Small bowel imaging through magnetic resonance imaging (MRI), computed tomography (CT), contrast study or ultrasound, is recommended in suspected paediatric IBD cases, but might be deferred in cases of UC, depending on the clinical presentation and response to treatment. UC was more common than CD in VEO-IBD cases, which is consistent with the literature.23 Stricturing disease is less common in VEO-IBD, and we found the same in our cases.

VEO-IBD is associated with underlying monogenetic defects in around 44% case and more than 50 genetic mutations are known.24 In the current study, 50% patients had monogenic IBD, and the mutations identified were XIAP, TTC7A, PRKDC, PIK3CD, LRBA, EPCAM, RAG-1, DOCK8 and MEFV which are well described in literature.25

There are no established guidelines for the treatment of VEO-IBD.26 It is well documented that it responds poorly to conventional therapy and is associated with high morbidity and mortality. Genetic analysis can help in accurate diagnosis and appropriate treatment options.27 The current study had greater mortality in monogenic IBD compared to non-monogenic IBD. In all cases of monogenic IBD, the cause of death was other than IBD, like fatal pneumonia, meningoencephalitis and septicaemia, due to underlying immunodeficiency. In addition, diagnosis based on genetic analysis can also lead to genetic counselling for family members of patients.

The limitations of the current study included a small sample size which was not population-based, and it was a single-centre study, which means the results cannot be generalised to all settings.

VEO-IBD should be suspected when conventional management fails to rectify common disease mimickers. Monogenic IBD have earlier and severe presentation with significant mortality than the non-monogenic form. Testing for underlying immunological defect and genetic mutation would be helpful for managing these rare disorders.