Objective: To determine the clinical outcome and significance of pathological necrosis after neoadjuvant chemotherapy.

Methods: The retrospective study was conducted in Shaukat Khanum Memorial Cancer Hospital and Research Center and comprised data from January 2010 to December 2015 related to young with newly diagnosed Ewing sarcoma on histopathology. Data was collected on patients aged <20 years of either gender along with primary tumour site, metastatic status, tumour volume, mode of local therapy, degree of necrosis post-surgery, tumour margins after resection, outcome at the end of treatment and at last follow-up visit. Tumours were categorised as grade I = little or no necrosis, grade II = 50-90% necrosis, grade III = 90-99% necrosis, and grade IV = 100% necrosis. Data was analysed using SPSS 20.

Conclusion: Tumour necrosis and histopathological changes post-surgery were found to have great impact on survival outcome in Ewing Sarcoma.

Ewing sarcoma is an aggressive primary bone tumour, most commonly affecting children and young adults.1 About 20-25% patients present with metastases at the time of presentation in which pulmonary site involvement is in 70-80% cases, and osseous involvement in 40-45%.2 A multidisciplinary treatment strategy dramatically improved the survival of patients with localised ES and 10-year overall survival has reached up to 55-65% nowadays. However, local recurrence and distant metastasis lead to poor 5-year overall survival (OS) of 20-35% in metastatic disease.3 Presence of metastasis at the time of diagnosis is one of strongest risk factors and other well-known risk factors are primary tumour site4 and tumour volume/size.5 ES treatment consists of induction chemotherapy followed by local treatment of the primary tumour either by surgery, radiotherapy or both, and ends with consolidation chemotherapy.6 Percentage of necrosis after giving induction chemotherapy is an additional prognostic factor for OS7 but impact of surgical margins on OS is controversial; however, the risk of local relapse is significantly less after wide resection in comparison to marginal or intra-lesional resections.8 Postoperative radiotherapy in patients with close resection and intralesional margins increase the local control and event-free survival (EFS).9

The current study was planned to determine the clinical outcome and significance of pathological necrosis after neoadjuvant chemotherapy.

The retrospective descriptive study was conducted at Shaukat Khanum Memorial Cancer Hospital & Research Center, Lahore and comprised data from January 2010 to December 2015 of both non-metastatic and metastatic who were followed up until October 2019. After approval from the institutional ethics review committee, data was collected from patients aged <30 years of either gender related to primary tumour site, metastatic status, tumour volume, mode of local therapy, degree of necrosis post-surgery, tumour margins after resection, outcome at the end of treatment and at the last follow-up visit. Data of those who were lost to follow-up was excluded.

The ES diagnosis was made by histopathologist on open biopsy and was considered confirmed on the presence of round blue cell tumour and clostridium difficile infection (CDI) antigen which was absent in lymphoma, rhabdomyosarcoma and neuroblastoma. All patients underwent complete history, thorough physical examination, blood tests, imaging of primary site with magnetic resonance imaging (MRI) scan, bone scan and bilateral bone marrow biopsy. To rule out pulmonary involvement in patients in whom thorax was the primary site, computed tomography (CT) scan was used.

Tumour volume was measured by recording the maximum dimensions in three planes. Tumour volume <200ml and > 200ml were included in the study.

Local control in the form surgery had been given to the patients whose tumour was amenable to resection with adequate margins regardless of size, response to chemotherapy or location of tumour. However, in some patients it was based on the patient and tumour characteristics which standardised the choice of local control. Preoperative radiotherapy was given to patients who presented with spinal cord compression and in patients where complete resection of tumour was not possible after the induction chemotherapy. Postoperative radiotherapy had been given to patients in whom there was poor histological response <90% necrosis and resection margins positive of tumour. The dose of radiotherapy was 55.4 Gys in 30 fractions. After local control of tumour, the patients received consolidation cycles of chemotherapy in both non-metastatic and metastatic cases.

Data was analysed using SPSS 20. Mean±standard deviation was used to summarise quantitative data, whereas frequencies and percentages were used to organise qualitative data. The association of explanatory variables in relation to status (alive or death) was determined by using chi-square test. Univariable and multivariable logistic regression (MLR) models were used to identify the independent risk factors associated with mortality. Kaplan-Meier survival curves were used to assess OS. Log-rank test was employed to compare OS. Statistical significance was defined as two-tailed p<0.05.

Overall, 112(90%) patients were treated under EE-99 protocol and 12(10%) under the AEWS 0031 protocol. Local control in the form surgery was given to 37(30%) patients. Preoperative radiotherapy was given to 7(5.6%) patients who either presented with spinal cord compression or in whom complete resection of tumour was not possible after induction chemotherapy. 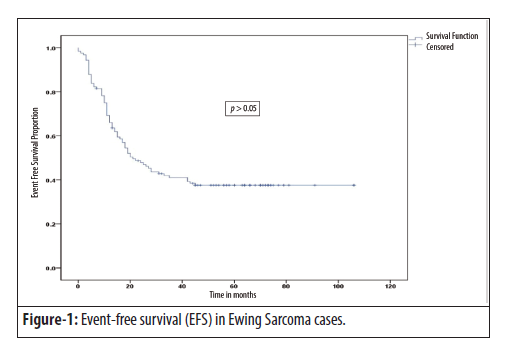 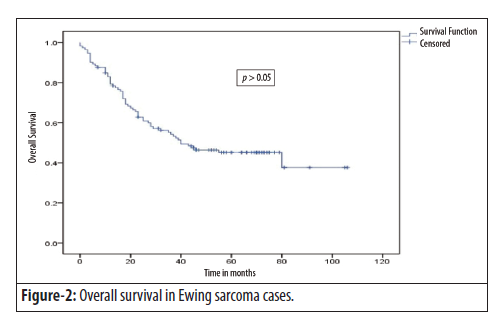 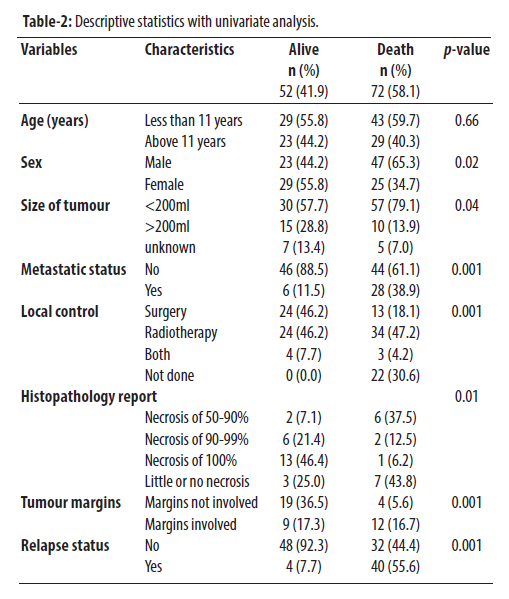 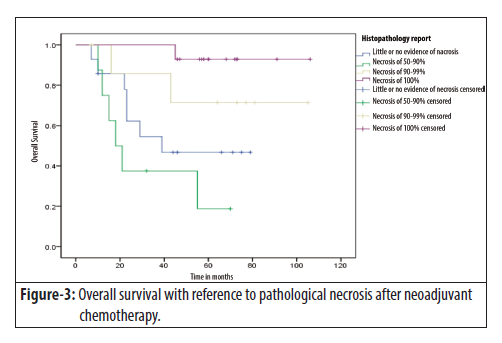 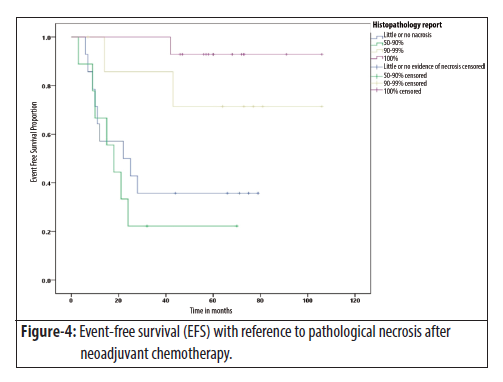 In multivariate analysis, four variables were identified as independent risk factors for mortality in ES: if disease was metastatic; if tumour margins were involved; if relapse status was positive; and if the gender was female (Table 3). 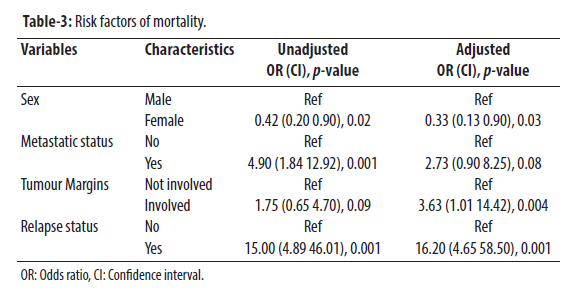 Different chemotherapy agents such as vincristine, topotecan, cyclophosphamide, Ifosfamide, carboplatin, etoposide, gemcitabine, oxaliplatin and irinotecan were given either alone or in combination with radiotherapy and surgery. Forty (91%) patients died due to disease progression and only 4 (9%) patients were alive.

Paediatric sarcoma is the third most common malignancy in the paediatric age group and, among them, ES is the second most prevalent bone tumour in children and adolescents. In developing countries, like Pakistan, there are few tertiary care oncology centres in which paediatric ES treatment is offered and that explains the scarcity of published data on paediatric ES outcome from Pakistan. The Shaukat Khanum Memorial Cancer Hospital and Research Centre (SKMCH&RC) is a tertiary care cancer hospital in which specific ES management is available. The current single-centre study revealed the risk factors and predictors of survival outcome in paediatric ES.

During the last three decades, there is improvement in survival outcome of ES patients due to advancement of chemotherapy agents. However, in low-income countries, such as Pakistan, EFS and OS are still <50%. There are multiple pre-treatment risk factors which affect survival in ES.

Paediatric ES frequency is more common in the 2nd decade of life, and only 15% patients have age <10 years.13 However, in the current study about half the patients were aged <11 years. In a previous study, survival outcome of paediatric ES was better than adult population14 which is contrary to the current findings.

There is no impact of difference in gender on treatment efficacy and drug toxicity, as shown by Van den Berg H et al.15 However, further studies are needed to prove the difference in enzyme metabolism for ifosfamide and cyclophosphamide between males and females. In the current study, female patients were less in number compared to male patients and death also occurred less in female patients. In previous studies, baseline tumour volume had impact on disease outcome, as in our study, but the most important factor to consider was the estimation of tumour volume response to initial chemotherapy and histological response after surgery on the survival outcome.16,17

Metastatic ES is a very aggressive systemic disease and presents with a wide spectrum ranging from solitary lung metastasis to widely disseminated multi-organ disease with different disease outcome.18 Isolated pulmonary metastatic disease outcome is always better than bone and bone marrow disease despite treatment with high-dose chemotherapy along with stem cell transplant. In the current study, metastatic disease had dismal outcome whether it was isolated or combined metastasis, and, unfortunately, no patient survived.

The decision on local control in the current study depended on the plan made in the multidisciplinary team (MDT) meeting. MDT decisions based on site, size of tumour along with patient and family preference were also considered in the final decision. In the current study, 16% patients absconded during the treatment. However, most patients left treatment at the time of local control.

The role of postoperative radiotherapy seemed to be protective in patients in which margins were involved to reduce the risk of local relapse and it was also helpful in pelvic or axial skeleton ES. Unfortunately, all patients with pelvic ES in the current study died due to local disease recurrence. Radiotherapy was associated with the development of secondary malignancies, growth retardation and post-operative complications in limb salvage reconstructive surgeries.

In ES patients, about 70% relapse happened within 2 years of completion of treatment and very rarely patients relapsed after 2-5 years of completion of treatment.22 In the current study, half of relapsed patients presented with both local and distant relapse and most of the patients were identified on follow-up imaging and very few presented with clinical signs and symptoms. There was a multiple chemotherapy drugs regimen used for treating recurrent ES and a study is currently being performed to evaluate the best regimen; temozolamide/irinotecan combination regimen holds 47% cumulative response rate compared to another regimen. Clinical trials, including cytotoxic chemotherapy, agents targeting pathways specific to tumour cells and immunotherapy, are going on and these are essential for treating resistant systemic disease.23,24

The current study showed the most important risk factors for mortality in ES were gender, metastatic status of disease at baseline, tumour margins post-surgery and relapse status after treatment completion. The most important factor to reduce the mortality and abandonment is educating the general physicians and paediatricians regarding early referral to paediatric oncologists along with psychosocial support by developing support groups for poor patients.

The main limitation of the current study was its retrospective nature alongside being a single-centre experience. Also, there was no follow-up of patients who absconded the ES treatment protocol.

Tumour necrosis and histopathological changes post-surgery were found to have great impact on survival outcome in ES. Knowledge of prognostic factors in ES patients helps to guide treatment planning and there is a need for close collaboration between paediatric and adult sarcoma centres around the world to develop curative therapy in recurrent ES.