Objective:  To identify the mental health problems among patients having symptoms of tinnitus and vertigo due to vestibulocochlear disturbances.

Methods: The cross-sectional study was conducted from May to September 2019 at the Hearts International Hospital and the Hearing and Balance Clinic, Rawalpindi, in collaboration with the Foundation University, Islamabad, and comprised vestibulocochlear disorder patients of either gender aged >18 years having chief symptoms of vertigo and tinnitus for at least the preceding 3 months. Psychiatric evaluation was conducted using the Tinnitus Handicap Inventory, the Dizziness Handicap Inventory and the Depression, Anxiety, Stress Scale. Audiological evaluations were carried out to gauge the severity of symptoms. Data was analysed using SPSS 20.

Results: Of the 202 subjects, 60(30%) were females and 142(70%) were males. Patients experiencing vertigo and tinnitus symptoms had a strong tendency to develop psychiatric problems (p<0.05). Significant differences were noted among male and female patients regarding the representation of psychiatric symptoms (p<0.05).

Conclusion: Patients experiencing tinnitus and vertigo symptoms tended to have a deviant psychological profile analogous with other chronic diseases.

Symptoms of tinnitus and vertigo usually originate due to disturbance in the vestibulocochlear system.1 Tinnitus is described as the perception of noise, ringing or humming in the ears, which is “not from the external environment or because of any auditory hallucinations associated with mental illness”.2

Vertigo or dizziness is related to a number of biological causes associated with vestibulocochlear disorders.3 The most reported sources of vertigo are ischaemia involving too little blood supply to the nerve, labyrinthitis involving inflamed vestibular nerves, and accidental head injuries compromising the vestibular anterior artery to produce symptoms of vertigo.4

Current literature highlights the underlying concept regarding patients experiencing tinnitus and vertigo and their tendency to exhibit numerous psychiatric features in the form of anxiety, depression and stress, therefore influencing various disease-related activities among patients experiencing these symptoms.5,6 The co-morbidity of these two symptoms with various other psychiatric complications has been frequently stated in recent literature.7 Further it has been emphasised that the start of psychiatric features might delay the recovery process of patients from these symptoms.8

The cross-sectional study was conducted from May 15 to September 30, 2019, at the Hearts International Hospital and the Hearing and Balance Clinic, Rawalpindi, in collaboration with the Foundation University (FU), Islamabad. After approval from the ethics review committee of the FU Department of Psychology, the sample size was calculated using Epitool with 95% confidence interval (CI).10 The sample was raised using purposive non-probability sampling technique from among patients of either gender aged >18 years having vestibulocochlear complications for more than three months. Patients having prior history of medication side effects, epilepsy and cardiac diseases were excluded.

After taking written informed consent from all the patients, the ear examination was done with wireless video otoscope followed by audiometric test (Interacoustic AD-226 Audiometer). Tympanometry for ear drum functioning was done by middle ear clinical analyser. For every patient, audiological information was collected in a sound-treated room to exclude any other external sources of sound with equipment (IEC 60646-2) having updated calibration to reduce reliability and validity issues.

Psychiatric evaluation of symptoms was done using various scales, including the Tinnitus Handicap Inventory (THI) which is a valid and reliable tool to measure tinnitus severity having test reliability of 0.84 to 0.94. the Depression, Anxiety, Stress Scale (DASS) was used to evaluate levels of stress, anxiety and depression. The overall DASS scale has reliability of α=0.83, and for subscales, it is α=0.63 for depression; α=0.60 for anxiety, and α=0.60 for stress. The Dizziness Handicap Inventory (DHI) was used to determine the self-perceived handicapping effects caused by the pathology in the vestibular system. The inventory has overall reliability of α=0.95. A combination of these three scales was used in this study to ascertain the severity of physiological problems along with psychological symptoms of patients.11-14 Data was analysed using SPSS 20. 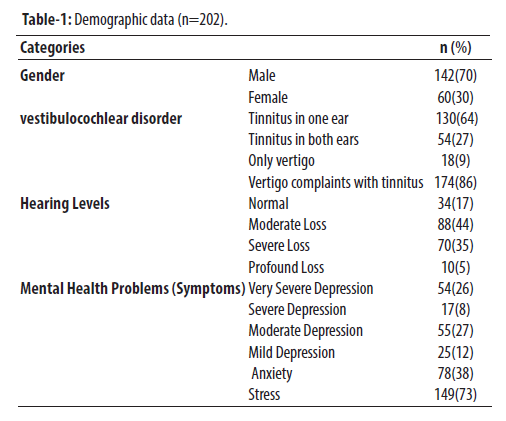 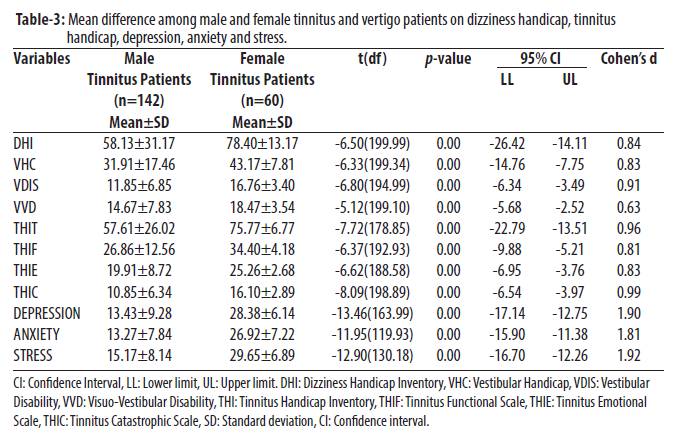 Tinnitus is a troubling state that is defined as a constant existence of sound with no external sound source. These varying sounds usually emerge when a person is in a quiet environment.15 Tinnitus intensity and sounds heard are a different experience for every other patient due to varying individual perceptions, understanding and identification, the noises heard may range from slightly troublesome to extremely loud, having a great deal of impact on patients along with compromised hearing.16

Dizziness or vertigo has a prevalence rate of around 28-30%, and general symptoms presented by patients are sudden episodes of dizziness while bending over, turning the head rapidly or while lying down and adjusting to a comfortable posture in bed.17

The current study was designed to compare and investigate symptoms of stress, depression and anxiety in conjunction with vertigo and tinnitus symptoms. To the best of our knowledge, there are few studies done in Pakistan on the topic and the psychological implications of patients experiencing vertigo and tinnitus have been generally overlooked.18 Regarding the associations of tinnitus and vertigo with psychiatric ailments, the current study highlighted the psychological problems arising from both vertigo and tinnitus in the form of anxiety, depression and stress. the findings are supported by past empirical literature.19 Sudden sensations of unsteadiness due to vertigo and continuous existence of tinnitus have been assessed in prior studies, and patients experiencing most provoking sensations of vertigo were reported to have more prominent symptoms of anxiety, depression and stress compared to other bodily symptoms presented.20

Conflict of interest: None