The molecular genetics of UV-Sensitive syndrome: A rare dermal anomaly

Ultraviolet-sensitive syndrome is a rare skin disorder characterised by heterogeneous phenotypic spectrum of skin freckling, telangiectasia and acute sunburn. It usually has an autosomal recessive pattern. So far, only 18 patients from nine different families (Japanese, French, Israeli, Iranian and Pakistani) have been reported in scientific literature. Its precise prevalence is still unknown, but, according to an estimate, its prevalence ratio is 1:100,000 worldwide. Until now, only three genes have been reported to be involved in the syndrome; the Excision Repair Cross-Complementing, Group 6, the Excision Repair Cross-Complementing, Group 8 and the UV-Stimulated Scaffold Protein A (UVSSA). Among these genes, the last one is reported to be more prevalent among different ethnicities, including Pakistani. Physiologically, most of the syndrome genes are involved in the transcription-coupled nucleotide excision pathway. In order to reduce the disease severity, the patients are advised to use medicated skin moisturisers or sun-blocks, sunglasses and gloves, while going out in the sun to avoid sun exposure. The current narrative review was planned to discuss the molecular genetics and the mutational spectrum of the syndrome, and to describe the differential diagnosis of various related disorders in order to facilitate clinical researchers.

Ultraviolet-sensitive syndrome (UVSS) is a rare skin disorder in which the affected individuals show hypersensitivity to ultraviolet (UV) rays without developing skin tumour. Cells of UVSS patients show sensitivity towards sun UV radiations. UVSS was first reported in two Japanese siblings in 1994.1 No clinical manifestations were observed except slight cutaneous photosensitivity and cutaneous pigmentation. Phenotypically, this disorder does not belong to any known groups of hypersensitive disorders, such as cockayne syndrome (CS) or xeroderma pigmentosum (XP).2 UVSS is a disorder of less severe cutaneous phenotypes that is caused by a defect in the transcription-coupled repair mechanism, which is a sub-pathway of the nucleotide excision repair (NER) pathway. UVSS belongs to the category of NER disorders that also include XP, CS and trichothiodystrophy (TTD). Although cutaneous sun sensitivity is a common clinical feature, it sometimes manifests neurological symptoms as well.

UVSS is genetically a heterogeneous disorder, which occurs due to mutations in three genes; the Excision Repair Cross-Complementing, Group 6 (ERCC6), the Excision Repair Cross-Complementing, Group 8 (ERCC8) and the UV-Stimulated Scaffold Protein A (UVSSA). The other disorders similar to UVSS include CS that occurs due to mutation in ERCC6 and ERCC8 genes. However, the main difference between CS and UVSS is the presence of additional features of premature aging as well as neurological and developmental anomalies.3 So far, only three genes mutations have been reported in 18 patients from five different ethnic groups. Among these three genes, UVSSA has reported four mutations and is thus far considered to be more prevalent genetic factor worldwide. Nevertheless, Pakistani, Iranian, Japanese and Israeli ethnicities have reported more cases of UVSSA than any other countries. The ERRC6 gene mutation is only reported in Japanese and the ERCC8 in French populations, respectively (Table-1).

The current narrative review was planned to summarise the molecular genetics and the mutational spectrum of UVSS, and to describe the differential diagnosis of various related disorders in order to facilitate clinical researchers.

ERCC6 is the first gene reported in UVSS that is situated on chromosome 10q11. It consists of 21 exons and spans over 90kb of genomic deoxyribonucleic acid (DNA). Its largest transcript encodes 1493 amino acids long protein with molecular weight of 168416 Da. ERCC6 protein has significant role in transcription-coupled excision repair (TCR) pathway. Besides the TCR pathway, ERCCR6 protein is also involved in nucleosome remodelling, mitochondrial DNA metabolism, inter-strand crosslink repair, DNA double-strand break repair and base excision repair pathways.4 This protein has adenosine triphosphate (ATP)ase activity, interacts with numerous transcription and editing repair proteins, and may be involved in complex formation at DNA repair sites.5 The N-terminal domain employs an inhibitory effect on the helicase ATP-binding domain in such a way that its ATPase activity is restricted. Its C terminal ubiquitin-binding domain (UBD) is essential for TCR pathway due to its interaction with ribonucleic acid (RNA) polymerase II and association with chromatin after UV irradiation.6 Apart from UVSS, mutation in this gene may also cause cerebro-oculofacio-skeletal syndrome type 1, CS, De Sanctis-Cacchione syndrome (DSCS) and premature ovarian failure type 11. So far, only one mutation in this gene has been reported to be involved in UVSS in a single Japanese family/patient.3

The second gene mapped in UVSS patients is ERCC8. Genetic mapping has found this gene on the long arm of chromosome 5 which is 5q12.1.7 ERCC8 contains 12 exons and occupy 71Kb of genomic DNA. The translational product of this gene consists of 396 amino acids with molecular mass of 44KD. Structurally, it contains WD repeat 39-371 amino acid (WD40 repeat) domain, which is also essential for TCR pathway due to its interaction with RNA polymerase II.5 The product of this gene is also involved in transcription-coupled repair mechanism, stimulating mitochondrial DNA repair, regulating mitochondrial proteostasis and stimulating mitochondrial transcription.3 After DNA damage, the ERCC8 protein appears to translocate quickly to the nuclear matrix. ERCC8 protein also requires the ERCC6 protein for mediating the transcription-coupled repair pathway. Furthermore, ERCC8 is shown to be present with the hyper-phosphorylated form of RNA polymerase II at the nuclear matrix during transcription-coupled nucleotide excision repair (TC-NER) process.8 Genetic studies have so far reported only one mutation in this gene to be involved in UVSS in a single French family/patient. In addition to causing UVSS, the mutation in this gene is also responsible for CS type A.9

UVSSA is the third gene reported in UVSS patients. Cytogenetically, this gene is situated on the short arm of chromosome 4p16.3. It contains 14 exons and spans over 40.7Kb of genomic DNA. Its longest transcript produces 709 amino acids long protein with approximate molecular mass of 80.5KD.

After UV irradiation, UVSSA seems to play a key role in dephosphorylation and ubiquitination of RNA polymerase II. It also helps in the stabilisation of ERCC6 protein. Studies have shown that its Vps27/Hrs/STAM (VHS) domain 2-145 amino acid is involved in synthesis of RNA after UV irradiations.10 Mutation analysis of UV-sensitive patients from Japanese, Iranian, Israeli and Pakistani families/patients has so far identified four mutations in this gene.10-12

UVSS is a rare form of autosomal recessive genetic disorder. Its differential diagnosis from other related skin disorders, like XP, TTD and CS, is quite challenging due to their overlapping phenotypic features. Major phenotypes of UVSS patients include acute sunburn, freckling and telangiectasia. Patients of UVSS lack phenotype of skin cancer, intellectual disability, microcephaly, immature sexual development and other internal tumours, but these phenotypic features represent the diagnostic criterion of XP. When phenotypic features of UVSS and CS are compared, CS patients, in addition to the basic UVSS features, like freckling, telangiectasia and acute sunburn, also have dental anomalies, intellectual disability, immature sexual development, premature aging, ocular abnormalities, dwarfism and osteoporosis (Figure).13 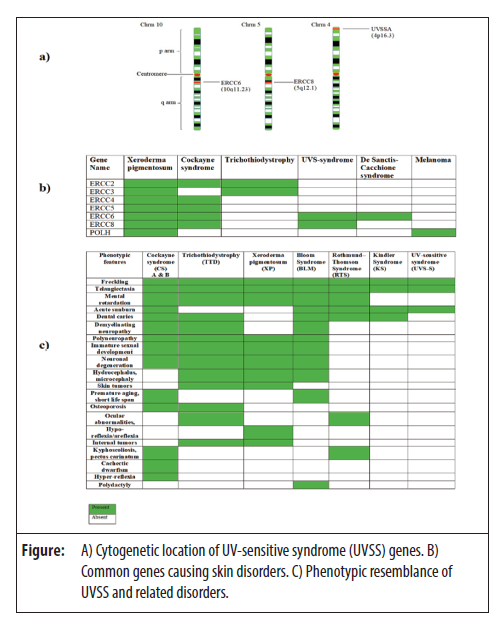 Following exposure to UV light, cells of UVSS patients show low survival and recovery of damaged DNA. As in the case of cells from CS patients, UVSS-affected cells also flop to perform normal repair of newly-transcribed DNA strand, but they retain the ability to remove damage normally from the non-transcribed part.

All events whose variation results in UVSS are involved in TCR, which is a sub-pathway of NER and specially removes DNA damage in actively transcribed regions of genome by blocking the progression of the transcription machinery. Moreover, CS proteins have additional functions of oxidative damage repair in DNA. However, the cells of UVSS patients are UV-sensitive, but are not sensitive to any oxidising agent.11,12

The NER pathway and UV-sensitive disorders

UV photoproducts (PPs) modify double-helical structure of DNA by forming photo dimers, which results in the termination of transcription and leads to apoptosis.14 However, if the lesion remained unrepaired, it may create mutations. Different DNA repair mechanisms are active in the cells that immediately remove the damaged DNA and save the integrity of the human genome. NER mechanism is the basic pathway that repairs the large DNA damage involving UV-made PPs.15 The pathway of NER is an extremely conserved and complex system of repair that involves around 28-30 different types of proteins that mediate three basic steps; identification of DNA damage, DNA unwinding, and DNA excision before re-synthesis of normal DNA.16 The two sub pathways of NER are global genome repair (GGR) and TCR that are involved in damage recognition and repair. TCR is a sub-pathway of NER and is involved in the repair of lesions caused by UV radiation. This pathway removes lesions by virtue of location on the transcribed strand of active genes. GGR removes lesion throughout the genome regardless of transcriptionally active or inactive regions of DNA.16

Lesions that should be repaired by TCR primarily halt the transcription of genes. TCR pathway quickly performs functions compared to GGR.17 TCR induction is closely associated with RNA polymerase II that is held at the lesions site, induced by ERCC8, called Cockayne syndrome A (CSA), and ERCC6, called CSB, proteins.18

The GGR, XP complementation group E (XPE) and XPC, which are DNA-binding protein complexes, recognize UV lesions and then fix them accordingly. Following the recognition of damaged DNA, the RAD23 homolog B (HR23B), XPE and XPC protein complex joins a common repair pathway, which starts from DNA unwinding around the damaged area. Transcription factor II Human (TFIIH), in association with XPD and XPB helicases, unwinds the double-stranded DNA and creates a DNA bubble/fork.19 Afterwards, XPA and Replication protein A (RPA) proteins also join the complex, wherein XPA binds to the damaged strand, and RPA binds to the normal strand. These two proteins permit the attachment of XPG and XPF-ERCC1 endonucleases. Then, DNA bubble is stabilised by XPG and chop-off the 3' end of DNA to the UV lesion. XPF ERCC4 and ERCC1 complex cut the 5' end of the DNA to the damaged site. Thereafter, DNA polymerase and proliferating cell nuclear antigen (PCNA) re-synthesise the new DNA strand, corresponding to the normal strand. In the end, DNA ligase covers the nicks and finishes the repair procedure.20 The Growth Arrest and DNA Damage-45 (Gadd45) is a downstream target of tumour protein P53. Through Gadd45, P53 regulates DNA damage response, which functions in the repairing of DNA, while Gadd45-deficient cells lack UV-induced DNA damage repair mechanism.21 However, previous studies have proposed that expression of XPC and XPE protein may directly be affected by P53. It has been observed that cells having P53 mutations have deficiencies in the elimination of both 6-4 PPs and cyclo-butane pyrimidine dimers (CPDs), thus proposing that functional P53 is needed by GGR and TCR pathways (Table-2).11,22-24 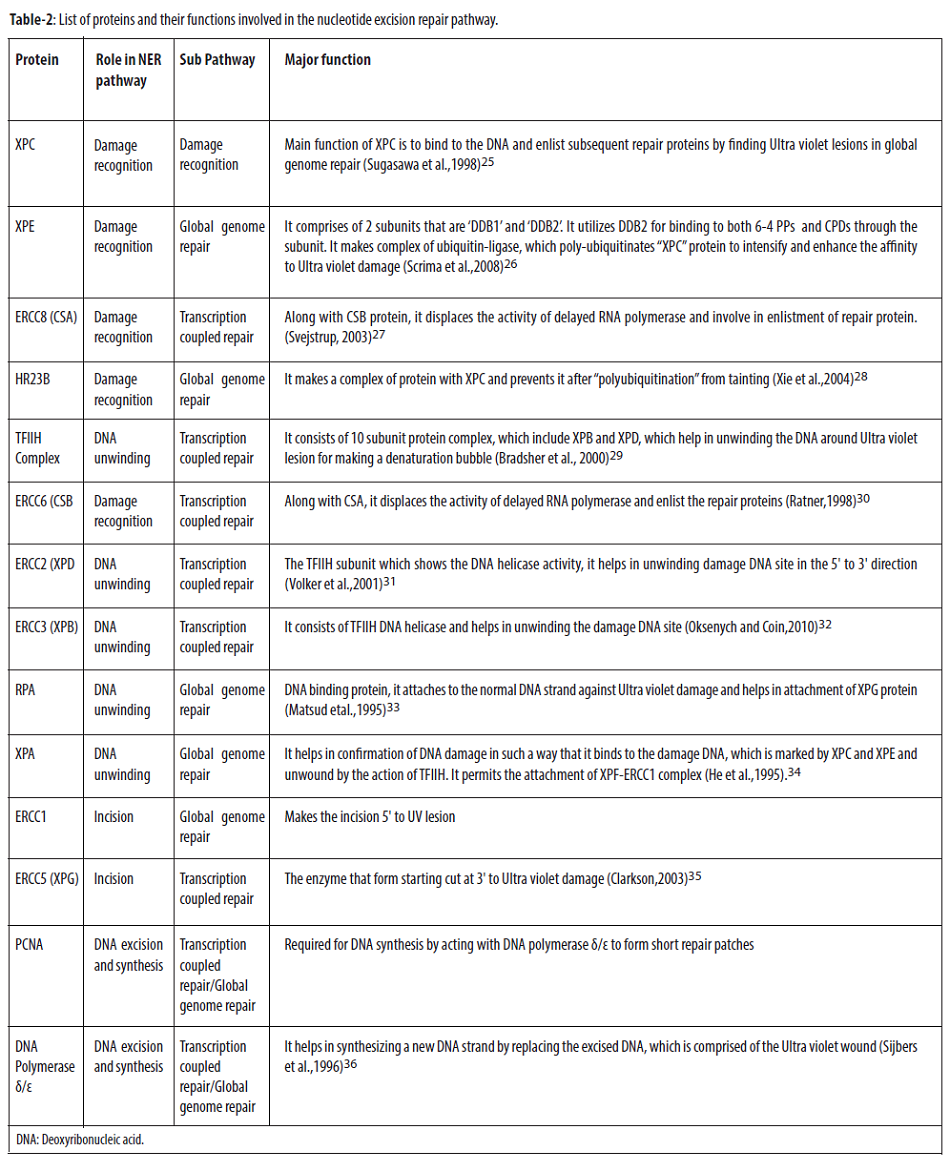 The prime preventive measure that UV-sensitive patients should adopt is to avoid sun exposure in order to protect skin from the damaging effects of sun UV radiations. For this purpose, the patients are required to avoid sun exposure, cover the exposed part of skin, use gloves and sunglasses. In addition to the prescribed management strategies, there exist different types of medicated lotions and creams containing corticosteroids that can protect the skin efficiently. Moreover, it is also recommended to conduct pharmacological studies in order to find some therapeutic agents.

UVSS is an autosomal recessive dermal anomaly with heterogeneous phenotypic spectrum of skin freckling, telangiectasia and acute sunburn. Till date, only ERCC6, ERCC8 and UVSSA genes mutations are reported to be involved in UVSS. Among them, UVSSA has more prevalence among different ethnic populations, especially in Pakistan, Iran, Japan and Israel. The knowledge on differential diagnosis of various UV-sensitive disorders may facilitate clinical researchers. Moreover, the mutational spectrum and genotype-phenotype association will help in the genetic diagnosis and personalised healthcare.

Acknowledgement: We are grateful to all the laboratory members who helped in collecting data.

17.    Aboussekhra A, Al-Sharif IS. Homologous recombination is involved in transcription-coupled repair of UV damage in Saccharomyces cerevisiae. EMBO J 2005; 24: 1999-2010.

Past, Present and Future of Urology in Pakistan