To determine the diagnostic accuracy of lung ultrasound and chest X-ray in diagnosing Acute Pulmonary Oedema in patients presenting with acute dyspnoea in emergency department, a study was conducted at the emergency department of Shifa International Hospital, Islamabad, from July 31, 2018 to January 31, 2019. A total of 225 patients presenting with dyspnoea and satisfying the inclusion criteria were assessed through clinical examination, lung ultrasound (LUS) and chest X-ray. The results of chest X-ray and lung ultrasound were compared with clinical diagnosis. The study revealed sensitivity of chest X-ray and LUS (60.16% versus 91.05%), specificity (66.67% versus 91.18%), positive predictive value (68.52% versus 92.56%) and the negative predictive values (58.12% versus 89.42%) respectively. The present study revealed that the LUS has better accuracy than chest X-ray for diagnosis of acute pulmonary oedema.

Acute shortness of breath is one of the top 10 causes for which adults present to the emergency department; it has a prevalence of 3-9% of all presentations.1 History, clinical findings, laboratory workup and chest X-ray are the usual baseline investigations to differentiate between the different causes of dyspnoea but these are not very specific and there is a significant delay in the availability of results which leads to misdiagnosis in 20% of the cases.2,3 In an earlier study, the prevalence rate for acute pulmonary oedema in patients presenting with dyspnoea was found out to be 45-55%.4 Lung ultrasound (LUS) is an innovative bedside technique which can be performed easily by the emergency physician and can differentiate acute pulmonary oedema from other causes of dyspnoea, thereby helping in early identification and initiation of specific treatment.5-7

LUS is gaining importance worldwide due to its easy applicability as a bedside procedure, cost effectivity, no exposure to radiation, no effect by positioning and it can be easily performed with minimal training.8-10 Pulmonary oedema, identified as diffuse alveolar interstitial syndrome, is characterised by a cone- shaped vertical artefact on ultrasound known as the ‘comet-tail’ sign or ‘B-lines’.2,6-8 The presence of three of these comet tails in any two quadrants of both the lungs is diagnostic with 100% sensitivity and 92% specificity.8 In contrast, no comet tails will be present in acute COPD exacerbation.2 In another study, the ultrasound examination and NT-proBNP, when combined together, interestingly had a sensitivity and specificity of 100% each, along with PPV and NPV of 100% each for distinguishing heart failure as compared to pulmonary causes in patients presenting with dyspnoea.7

Currently, the utility of ultrasound examination is mainly limited to abdominal, obstetric, vascular and urological problems. Lung ultrasound performed by an emergency physician can expedite the diagnosis and treatment of acute pulmonary oedema in a patient presenting with undifferentiated dyspnoea. It can also reduce the exposure to X-ray radiation and the inconvenience of shifting a critical patient to the radiology unit. Moreover, it can assess the lung in a better way as compared to a 2-D X-ray and can also demonstrate improvement or failure in improvement, after appropriate management. Although published data exists, this is the first study to be conducted in an emergency department in Pakistan. This study aims to investigate the ability of LUS to differentiate acute pulmonary oedema as a cause of dyspnoea.

The current study was conducted at the emergency department of Shifa International Hospital, Islamabad, from July 2018 to January 2019 and was approved by the hospital’s ethical review board. A total of 225 patients were recruited in the study after informed consent. The inclusion criteria was: age ≥18 years, both genders, acute shortness of breath on arrival in the emergency department with a respiratory rate >30 breaths/minute, while the exclusion criteria was pregnancy, patients with a previous diagnosis of acute pulmonary oedema or patient with acute chest wall injury. The study was approved by the Institutional Review Board of the hospital (IRB #1117-393-2018)

The clinical criteria for acute pulmonary oedema (raised jugular venous pressure, pedal oedema, presence of S3 on cardiac auscultation and bilateral crepitation on lung auscultation) were assessed by the emergency physician and presence of all the mentioned clinical signs was considered diagnostic of acute pulmonary oedema. LUS was performed by the emergency doctor on duty and the images were saved to be seen later by two independent reviewers. The findings were documented in a performa. The presence of bilateral infiltrates on chest X-ray was considered diagnostic for pulmonary oedema. A portable ultrasound machine (Mindray, Model Dp-20) with convex probe of 3.5 Hz was used. The patients were examined in supine position with abducted arm. The chest wall was divided into four quadrants on each side and the probe was kept in intercostal space. The presence of comet sign in two or more quadrants was considered as diagnostic for acute pulmonary oedema for the current study. Categorical variables were presented as frequencies and percentages. Continuous variables were presented as means±standard deviations. Data was analysed through SPSS version 23.

The patients’ age and comorbidities are shown in Table-1. 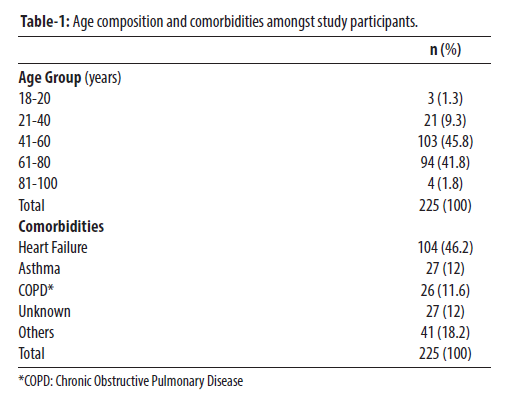 The diagnostic accuracy parameters are shown in Table-2 and Table-3.

Receiver operator curve (ROC) for both chest X-ray and LUS are shown in Figure-1 and 2. 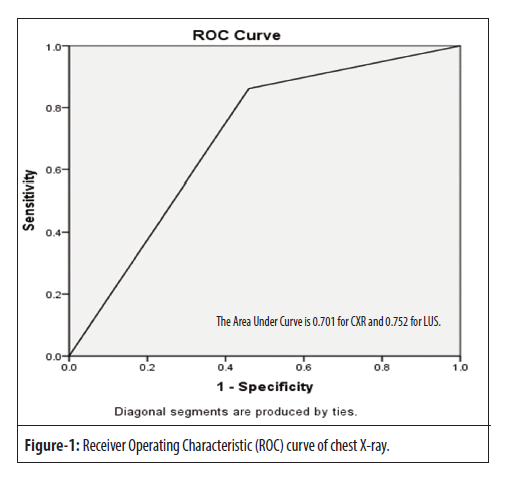 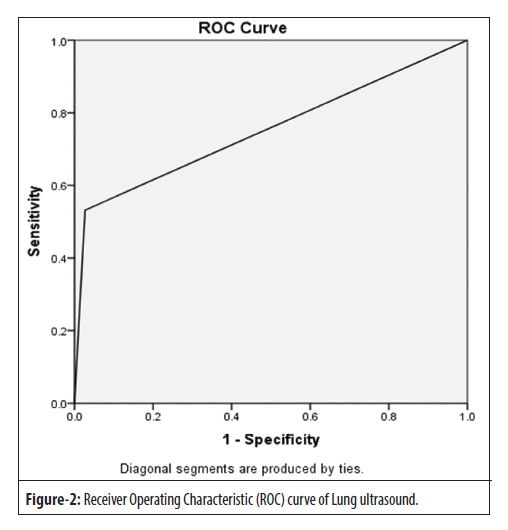 The chest X-ray is the most commonly used investigation for patients presenting with acute dyspnoea. Ease of interpretation and low cost are the upsides of this imaging technique. However, its limitations in terms of low sensitivity raises questions against its use as an initial tool for investigation. With availability of bedside ultrasonography, an alternative has emerged which has the potential to replace conventional imaging techniques. This study can help in increasing the knowledge of physicians practicing in emergency departments to utilise ultrasound machines for this purpose.

A study conducted by Helmy et al from Egypt also found chest X-ray to be 42.3% accurate, which was much less than the accuracy found in the current study (63.11%).11 They identified the sensitivity, specificity, PPV and NPV to be 41.6%, 90.0%, 97.0% and 16.7%, respectively. It is to be noted that the gold standard test for diagnosis of acute pulmonary oedema was CT scan of the chest in the referred study, compared to clinical diagnosis in the present study.

The present study showed a marginally better Area Under Curve (AUC) for LUS (0.75) as compared to AUC of chest X-ray (0.70). A study conducted by Bataille et al also showed almost similar AUC for LUS for the diagnosis of haemodynamic pulmonary oedema (0.68).12 A meta-analysis conducted by Komiya et al have mentioned AUC for LUS as 0.82 and 0.79 in a couple of studies compared by them.13 Elnaem et al compared the accuracy and AUC of chest X-ray, LUS and CT scan in diagnosing various conditions. They identified the AUC for chest X-ray and LUS to be 0.710 and 0.913.14

To assess students’ perception about Kahoot! as an innovative learning tool in oral pathology- a qualitative study