Objective: To determine the effectiveness of routine physical therapy with and without instrument-assisted soft tissue mobilisation on pain intensity and range of motion in patients with neck pain due to upper crossed syndrome.

Methods: The randomised controlled trial was conducted from January to March 2020, and comprised diagnosed male patients aged 18-40 years of upper crossed syndrome complaining of neck pain visiting the Agile Physical Therapy and Rehabilitation Complex and the National Orthopaedic Hospital, Bahawalpur, Pakistan. The subjects were randomised into control group A which received routine physical therapy and experimental group B which received instrument-assisted soft tissue mobilization along with routine physical therapy. The inclinometer was used to measure range of motion and the numeric pain rating scale for pain measurement. Data was analysed using SPSS 22.

Results: Of the 60 subjects, there were 30(50%) in group A with a mean age of 31.50±6.388 years and 30(50%) in group B with a mean age of 32.60±5.55 years. Pain rating at baseline in group B compared to group A show significant difference (p=0.01). Neck range of motion, including flexion, neck right bending, and neck left bending showed significant differences between the groups (p<0.05). The results for neck extension showed that both techniques were equally effective (p>0.05).

Conclusion: Instrument-assisted soft tissue mobilisation with combination of stretching exercises was found to be more effective in the management of neck pain in upper crossed syndrome compared to routine physical therapy.

The upper crossed syndrome (UCS) is the muscular disparity, commonly due to tightness of upper, middle, lower trapezius fibres, levator scapulae, sub-occipital, pectoralis major and minor tightness with addition of weakness of cervical flexors, sternocleidomastoid and serratus anterior. Forwarded shoulder is the term used for this rounded shoulder, which is one of the components of UCS.1,2

Deep cervical flexors, which are weak in UCS, ventrally cross with middle and upper trapezius fibres, which are tight in UCS. This abnormal function due to poor posture leads to the formation of adhesions in the involved musculature. The tightness exerts pressure and overload the atlanto-occipital joint, cervicothoracic, glenohumeral joints and till T4-T5 that induce the symptoms.3,4 As these muscles are involved in raising and lowering of shoulder blades, trapezius and levator scapulae, pectoralis minor and major in chest, and sternocleidomastoid in neck are involved in UCS due to decreased function.5 Muscle overuse in the same direction for prolonged period of time leads to muscle-shortening and tightness, and the commonly known effect is called ‘adaptive shortening’. All antagonists become stretched and lead to elongation with weakness, commonly called ‘stretch weakness’.6

The dysfunctional pattern and postural tone change result in muscular disparity at the levels of shoulder, head and neck region, causing neck pain. Among the reasons, working on computers 2hr/day is considered a risk for developing musculoskeletal disorders of the upper extremity. The most common of them is neck pain due to prolonged use of computers in the same posture.7 Among the musculoskeletal disorders, the neck pain in elderly population is 38%, while in younger ages it ranges from 6% to 22% and life-time prevalence ranges from 14.2% to 71%.8 The neck pain is associated with exposure to sustained abnormal posture, for example, prolonged sitting with neck/trunk held in prolonged flexion or rotation.9 These musculoskeletal disorders alter muscle activation and contribute to dysfunction at cervicothoracic /glenohumeral joints .There should be an interventional strategy to correct, re-align or reverse the developed pattern. Corrective exercise is found to be very feasible in UCS subjects.10 Such exercise can restore the muscular imbalance as well as correct the deformity that exerts pressure.11 The effective methods used are Kinesio-Taping, dry-needling , manual therapy12 and stretching exercise, like static or eccentric , and muscle energy techniques.13,14 Among these interventions, instrument-assisted soft tissue mobilisation (IASTM) is a technique that can break adhesions and cross-linkages. While the instrument is moved, the skin is compressed and then stretched with more mechanical stress compared to manual ways. The increased skin deformation is likely to alter the activities of the mechano-sensitive neurons being compressed and stretched.15,16 There are various IASTM tools, such as graston, hawk grips, functional and kinetic treatment and adhesion breakers and fascial abrasion technique, that have their own approach to treatment and instrument design, like material and shape of instruments.13,17 Experimental studies have been conducted to determine the effects of IASTM on range of motion (ROM), pain and inflammation in upper and lower extremities.18,19

Many techniques, including postural correction, manual therapies and exercise regimens, are available for its conservative management.

The current study was planned to determine the effectiveness of routine physical therapy (RPT) with and without IASTM on pain intensity and ROM in UCS patients with neck pain.

The randomised controlled trial (RCT) registered at Iranian Registry of Clinical Trials with Trial Registry Number: [IRCT20190912044754N1], was conducted from January to March 2020, in Bahawalpur, Pakistan. After approval from the institutional review board of the University of Lahore , the sample size was calculated using the formula N= (Z1-β + Z1 –α/2) 2(δ21 +δ22)/(µ1-µ2) /2, where desired power of the study (β) was 95%, desired level of significance (α) was 5%, expected mean difference in numeric pain rating (µ1-µ2) was 25.50-44.60=19.10, standard deviation of treatment group (δ1) was 7.30, standard deviation of conventionally treated group (δ2) was 14.60.20 The sample was raised using non-probability purposive sampling technique and comprised diagnosed male UCS patients aged 18-40 years having neck pain for at least the three preceding months with pain intensity being >3 on numeric pain rating scale (NPRS) which is a common tool used for pain evaluation,21 visiting the Agile Physical Therapy and Rehabilitation Complex and the National Orthopaedic Hospital, Bahawalpur.  After taking informed consent, coin toss method was used to randomise the subjects into control group A which received RPT and experimental group B which received IASTM along with RPT. All subjects were first assessed for the presence of UCS. The subjects fulfilling the criteria were asked to rate their pain 0-10 on NPRS, and ROM was measured. Inclinometer was used for cervical ROM which has minimal detected change found in ranges from 4 to 8 degrees.22 Gua Sha Tools (GST4, GST5) were used for soft tissue mobilisation. Emollient gel/lubrication was also used.

Group B was treated with IASTM. Pectoralis major (Figure 1) was mobilised in supine lying. 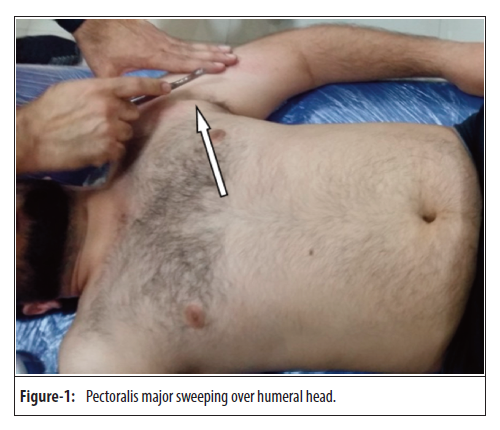 In sitting upper trapezius, levator scapulae and sub-occipitals were mobilised sweeping the tool over muscle belly in parallel direction (Figure 2). 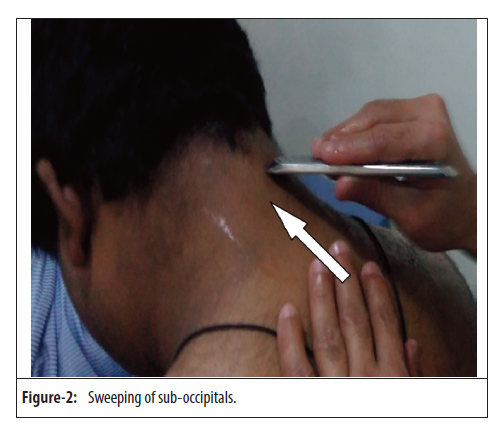 The latissimus dorsi swivelling followed by sweeping was applied with the instrument held at 30 degree with bevel up in side lying.23 Each treatment session was of 15-20 minutes for all muscles, with the help of IASTM device assisted by friction-free oil or gel, while the evidence was available on the shoulder for application of IASTM with applied protocol being 40 seconds. The general principle is a six-step technique comprising examination, warm-up, IASTM, stretching, strengthening and icing.

In both the groups, sessions were given thrice a week for 4 weeks. Data was collected by an independent assessor at baseline, after 2 weeks and after 4 weeks for pre-, mid- and post-intervention values. Data was analysed using SPSS 22. All numerical data was expressed as mean±standard deviation (SD). After fulfilling parametric assumptions, repeated measurement analysis of variance (ANOVA) was used for mean±SD of ROM, including flexion, extension and right and left bending, and NPRS scores for intra-group comparison. Independent sample t-test was used for inter-group comparisons for pain intensity and neck ROM. Confidence Interval (CI) was 95% and level of significance was set at p<0.05. 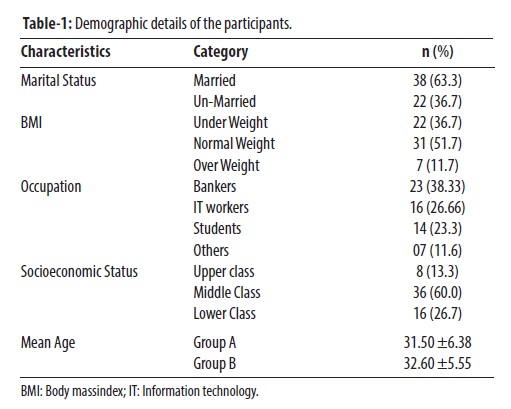 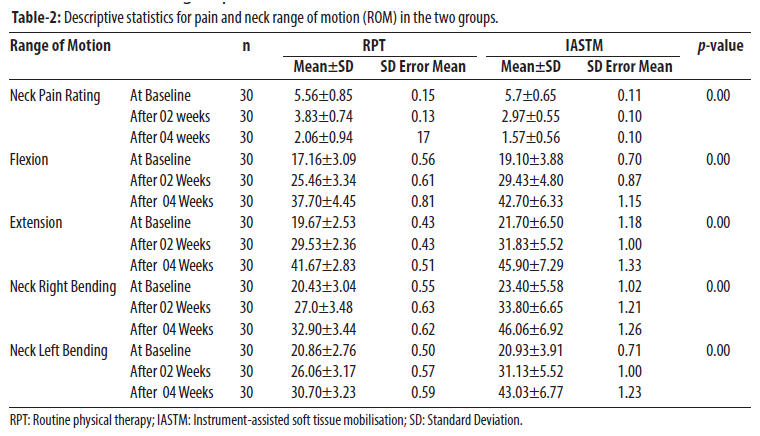 The results for neck extension showed that the difference between the two techniques was non-significant (p>0.05) (Table 3). 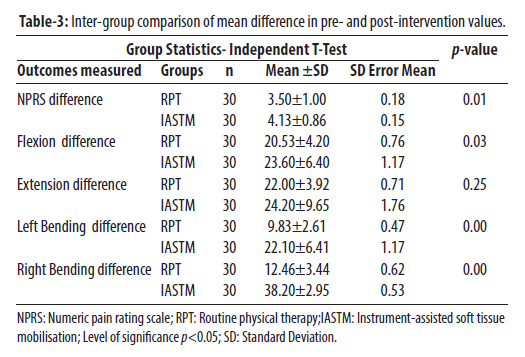 Neck pain showed improvement more in the IASTM group compared to the RPT group. IASTM was also found to be superior compared to electrical therapy even after one month follow-up for neck pain.24

In the current study, ROM increased from baseline to follow-up of 4 weeks in both the groups. The facilitation of muscle with the use of a device can help to stimulate the muscular response and resulted in increased ROM. That can be the reason for more improvement in group B compared to group- A. A study using single session to facilitate the entire posterior shoulder muscles with IASTM among collegiate basketball players showed that the IASTM group had 11.1O improvement compared to the RPT group which had corresponding value of -0.12O.25

IASTM can stimulate not only tendons, but also muscles and other soft tissues. The production of heat in the area under the instrument, improvement in tissue viscosity and its softening effect facilitate ROM.26 IASTM increases the healing process by angiogenesis and lead to early rehabilitation as well.17

The current study had significant difference in all neck movements except neck extension. A study assessing the application of IASTM in patients’ shoulders found it to be beneficial in improving ROM and early improvement in previously limited ROM.27

The effects of dry needling, soft tissue technique (SST) and orthopaedic manual therapy (OMT) for decreasing pain intensity have been reported to have immediate effects on improving pain, but that particular study did not have a control group.12

A local study found muscle energy technique to be more effective in improving pain, isometric strength and ROM.25 The stretching technique, including eccentric or static stretching, had significant results, but did not have significant results across the group, showing equal effects of both interventions.13

The use of dry needling, Kinesio-Taping and manual therapy aimed at measuring neck ROM and pain showed manual therapy results for left and right rotation were significantly higher than the other groups, but other variables showed no significant differences.28 In the current study the result of neck extension did not significantly improve in the IASTM group which can be due to any factor that was not considered. Further, more precise clinical researches with control of confounding variables, like BMI and muscle bulk, should be conducted.

In the light of the findings, there appears to be a need to better evaluate and treat of UCS as failure to do that leads to neck pain and other muscular imbalances which can further lead to compromised functioning of neck and can indirectly decrease functionality.

In terms of limitations, the current study comprised only males, and data was collected from only two centres in a single city.

IASTM with combination of RPT had significant effectiveness in the management of symptoms of UCS, including pain and limitation in ROM of the involved neck and surrounding musculature.

Disclaimer: The text is based on a Masters thesis.

15.    Ge W, Pickar JG. The decreased responsiveness of lumbar muscle spindles to a prior history of spinal muscle lengthening is graded with the magnitude of change in vertebral position. J Electromyogr Kinesiol 2012; 22: 814-20.

19.    Jenna T. "Therapeutic Effects of Instrument-Assisted Soft Tissue Mobilization and the Use in Athletic Populations: A Literature Review". [Honors Theses] University of Nebraska-Lincoln; 2018.