Objective: To determine the proportion of treatment-related mortality among mortalities of paediatric acute lymphoblastic leukaemia and to identify probable causes and risk factors.

Methods: The observational retrospective study was conducted in February-March 2019 at the Department of Paediatric Haematology-Oncology and Bone Marrow Transplant, the Children’s Hospital and the Institute of Child Health, Lahore, Pakistan, and comprised data of all paediatric patients of acute lymphoblastic leukaemia who expired during treatment from January 2017 till September 2018. Death due to relapse and deaths before treatment were excluded. Data was analysed using SPSS 16.

Conclusion: Treatment-related mortality, though potentially avoidable, was found to be a major cause of death among paediatric patients of acute lymphoblastic leukaemia, and sepsis was the most common cause.

During the past four decades, there have been exceptional gains in the overall survival (OS) in childhood cancer cases, especially in high-income countries (HICs) (>85%).1,2 However, unfortunately, a substantial number of children with acute lymphoblastic leukaemia (ALL) are present in low- and middle-income countries (LMICs) where the survival rate in children with cancer is far inferior.3,4

Patients of paediatric ALL in Pakistan have been reported to present with higher risk features, have delayed presentation, inferior outcomes, and higher rate of infection, relapse and treatment abandonment compared to data from HICs.5,6

There are several reasons for this OS disparity, and drug/treatment toxicity leading to treatment-related mortality (TRM) is one of the most important causes.7 Few studies that investigated TRM in LICs identified rates of ALL TRM from 11% to 21%.8,9 Recent clinical trials have shown 5% patients dying during induction therapy10-15 and in some trials, seemingly minor changes in therapy resulted in increased deaths due to toxicity.16,17

A vast majority of treatment-related complications are attributed to cytotoxic drugs and high-dose steroids that commonly cause immunosuppression and metabolic derangements. In the developing world, children often have suboptimal nutrition, poor personal hygiene and repeated admissions to hospital with frequent and extensive use of antibiotics increases the risk of infections. On the other hand, leukaemia itself may also cause complications, like haemorrhage, thrombosis, tumour lysis syndrome (TLS), and increased susceptibility to infections.18 It is therefore imperative to identify the reason for mortality in this group of patients and pinpoint the areas for rectification to decrease TRM.

The current study was planned to determine the proportion of TRM among all mortalities encountered in paediatric ALL patients in an LMIC setting.

The observational retrospective study was conducted in February-March 2019 at the Department of Paediatric Haematology-Oncology and Bone Marrow Transplant, the Children’s Hospital and the Institute of Child Health, Lahore, Pakistan, and comprised data of all paediatric ALL patients who expired during treatment from January 2017 till September 2018.

The Children's Hospital and The Institute of Child Health, Lahore is a tertiary care public-sector hospital which has the largest paediatric haematology/ oncology centre in the province of Punjab with a 60-bed inpatient unit catering around 100 patients daily. At this centre, curative as well as palliative treatment is offered free of cost not only to the patients who present from all over the country, but also from the neighbouring country Afghanistan.

Data included in the current study related to patients who had been admitted either for remission induction chemotherapy or any other treatment-related complication after achieving remission induction. Data of patients who expired due to either relapsed or progressive disease, or in whom treatment (chemotherapy) had not yet started was excluded. Data was retrieved using non-probability purposive sampling technique after approval from the institutional ethics review board.

All patients of ALL were treated according to United Kingdom Acute Lymphoblastic Leukaemia (UKALL) 2011 Interim Guidelines.19 The treatment protocol broadly comprises 5 phases of treatment: remission induction, consolidation, interim maintenance, delayed intensification, and maintenance. Remission induction chemotherapy is of two types. Regimen A is a standard-risk option, while Regimen B carries high risk. Induction therapy comprises dexamethasone, vincristine, asparaginase, intrathecal methotrexate for central nervous system (CNS) prophylaxis. In Regimen B, daunorubicin is added. Standard or high-risk treatment regimen is decided as per the National Cancer Institute (NCI)-based risk stratification20  and further phases of treatment are based upon response to treatment assessed by morphological remission in the bone marrow. Cytogenetics and Minimal Residual Disease (MRD) assessment facilities are not available at the study site. All further phases of chemotherapy after remission induction are categorised into Regimens A, B and C. Chemotherapeutic agents used in these phases are cyclophosphamide, cytarabine, asparaginase, vincristine, intrathecal, intravenous (IV) and oral methotrexate as well as doxorubicin and oral 6-mercaptopurine. The major differences among these therapy regimens lie between the consolidation phase of Regimen A with B/C, and the interim maintenance and delayed intensification phases of Regimen C with A/B with the addition of cytarabine blocks and escalating doses of methotrexate. Maintenance therapy for 2-3 years is composed of oral chemotherapy, comprising 6 mercaptopurine and methotrexate, with monthly vincristine and intrathecal methotrexate after every 3 months. In all newly-diagnosed patients, tumour lysis prophylaxis was given in the form of IV hydration (2-3L/m2/day), oral allopurinol, and aluminum hydroxide. Trimethoprim-sulfamethoxazole prophylaxis was given to all patients who were on treatment for ALL. Empirical antibiotics piperacillin-tazobactam and amikacin were given to all patients who were admitted for chemotherapy-induced febrile neutropenia and later on antibiotics were tailored according to the clinical indications or culture and sensitivity reports.

For the purpose of the current study, operational definitions were formulated as given below:

Patients with ALL were diagnosed based on peripheral blood picture and/or bone marrow biopsy with immunophenotyping on flow cytometry suggestive of ALL.

Complete remission was defined as morphological remission with <5% blasts in bone marrow biopsy.

Early death due to disease was defined as any newly-diagnosed patient who expired before the institution of remission induction chemotherapy. 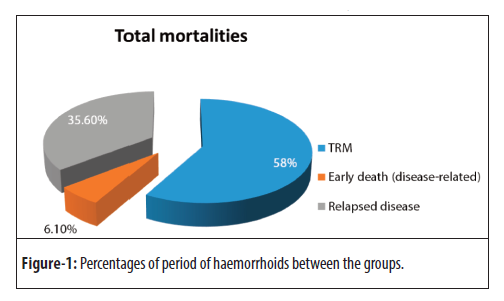 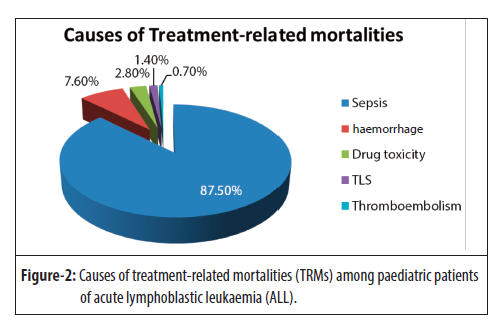 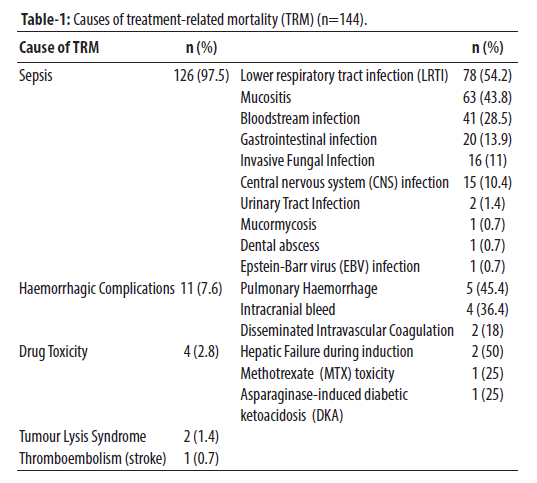 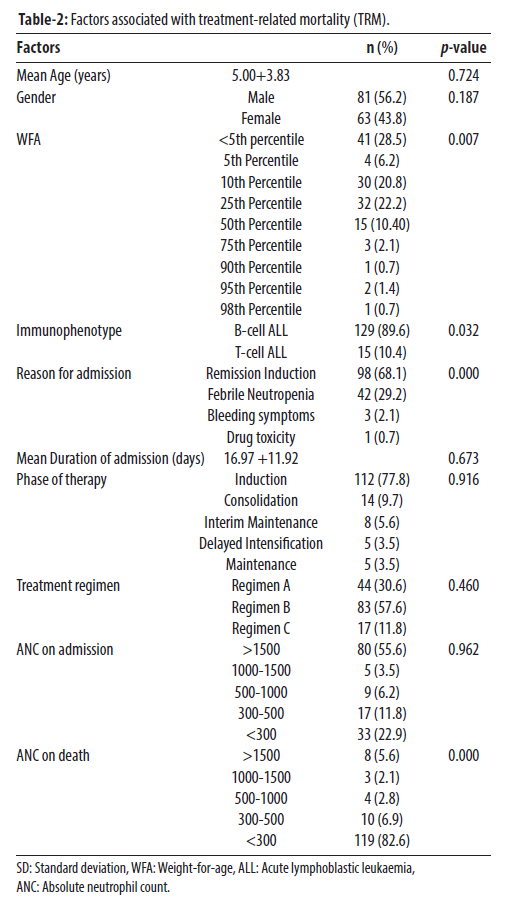 In the current study, TRM constituted the major proportion (58.3%) of all deaths in patients with ALL. Therefore, a decline in the rate of TRM will have a significant effect on the outcome and OS of these patients.

Chemotherapy-induced febrile neutropenia predisposes the patients to a number of infections. Infectious complications/sepsis is the major cause of mortalities among all paediatric oncology patients22-25 and the same was observed in the current study.

Wasting and undernutrition always pose challenges in paediatric patients and paediatric oncological patients pose even more challenges when concomitant chemotherapy-induced complications are present. It has already been proven that malnutrition has a significant effect on various aspects of management of paediatric ALL patients.26-29 The remission induction phase of chemotherapy is the most toxic phase of treatment in ALL26-29 and the current study also showed that most of the cases with TRM occurred during this phase of chemotherapy. The factors found to be statistically significant in association with the Treatment-related mortality in this study were: WFA of patients, the immunophenotype of ALL, the reason for admission in the hospital, and ANC at the time of death.

Treatment-related mortality, though potentially avoidable, was found to be a major cause of death among paediatric patients of acute lymphoblastic leukaemia, and sepsis was the most common cause. Infection prevention and control are vital in improving overall survival of ALL patients in developing countries.