Objective:  To outline the genotype of Chikungunya virus strains and to form their phylogenetic tree.

Methods: The cross-sectional study was conducted at the Armed Forces Institute of Pathology, Rawalpindi, Pakistan, from August 2016 to September 2017, and comprised suspected Chikungunya samples. The viral ribonucleic acid was extracted and amplified. The purified product was sequenced using Sanger dideoxy method. Phylogenetic tree was constructed. Sequences generated were checked for alignment with sequences reported globally. Structural prediction and analysis was performed using Phyre2 and the models were visualised in PyMol2.2.

Results: In the 11 suspected samples, 7(63.6%) were found to be positive for Chikungunya. Of them, 5(71.4%) sequences generated were found to be aligned with other full structural polyprotein sequences, having 99% similarity with amino acid sequences.

Conclusion: The Chikungunya strains in the study belonged to the East/Central/South African genotype.

Chikungunya virus (CHIKV) belongs to genus alphavirus that consists of 29 distinct species causing a spectrum of diseases ranging from febrile illness to encephalitis disease in humans.1 Important glycoproteins E1 and E2 are involved in replication of the virus. E1 is involved in membrane fusion and E2 permits the virus to enter the cell by the process of endocytosis.2

According to genetic studies, CHIKV has evolved into three different genotypes; West African (WEF), East/Central/ South African (ECSA) and Asian genotypes. Phylogenetic analyses of historic strains proposed that CHIKV originated in Africa and then dispersed sporadically, causing huge number of epidemics which infected millions of people in Asia, Europe, the Americas, and Pacific islands during the last 50 years.3

In the last few years, probable reasons of outbreaks included increased air travel across the globe as well as seaborne trade.4 Asian countries, including Pakistan, are enduring considerable climate changes. Warming Indian oceans and Indian subcontinent has intensified the monsoon cycle and has changed the direction of winds. These changes brought CHIKV to the region. The extrinsic incubation period of arboviruses in mosquitoes has been shortened due to raised environmental temperatures.5 In Pakistan, CHIKV cases were first observed in 1983 when its antibodies were detected in the serum of one human and four rodents.6 A regional study showed CHIKV in 48.6% samples via Reverse transcription-polymerase chain reaction (RT-PCR) and 21.5% via detection of immunoglobulin M (IgM) antibodies with enzyme-linked immunosorbent assay (ELISA).7 A study carried out during dengue epidemic in 2015 in Lahore showed the presence of CHIKV in 4% samples using ELISA.8

The current study was planned to outline the genotype of CHIKV strains and to form their phylogenetic tree.

The cross-sectional study was conducted at the Armed Forces Institute of Pathology (AFIP), Rawalpindi, Pakistan, from August 2016 to September 2017. After approval from the institutional ethics review board, the sample size was calculated using the World Health Organisation (WHO) calculator.9 The sample was raised using non-probability consecutive sampling technique. All samples were processed after taking written informed consent from the subjects who were CHIKV-positive patient regardless of age and gender. All negative cases were excluded.

The samples were analysed using ELISA. Deoxyribonucleic acid (DNA) was amplified in sample that were found positive which were later sequenced. Total 1800bp segment that included partial E1 and E2 sequences was generated from overlapping sequencing results. The CHIKV sequences generated were available in National Center for Biotechnology Information (NCBI) nucleotide database10 under the accession numbers MH548366, MH548367, MH548368, MH548369 and MH548370.

The amplified product was initially visualised on a Polyacrylamide gel against a 100bp DNA ladder.

The sequences generated were aligned with CHIKV sequences reported globally. All full-genome sequences were trimmed to include only the coding sequence (CDS) for structural polyprotein. The alignment was generated in MEGA 7 (Molecular Evolutionary Genetics Analysis) using the MUSCLE

(MUltiple Sequence Comparison by Log-Expectation) algorithm with codons using default settings. This alignment was then used to estimate the best substitution model for constructing the phylogenetic tree. A Maximum Likelihood (ML) tree was constructed using the best evolutionary model estimated by MEGA. The gaps/missing data was treated with partial deletion. The tree was validated using Bootstrap Method with 1000 replicates. Tertiary structure for CHIKV structural proteins E2, E1 region were predicted in Phyre2 using Protein Data Bank (PDB) structure 3N40 as a template. These models were then visualised in PyMol2.2.

Of the 11 suspected samples, 7(63.6%) were found to be positive for CHIKV. Of them, 5(71.4%) sequences generated were found to be aligned with other full structural polyprotein sequences, having 99% similarity with amino acid sequences. Phylogenetic tree was generated (Figure-1). 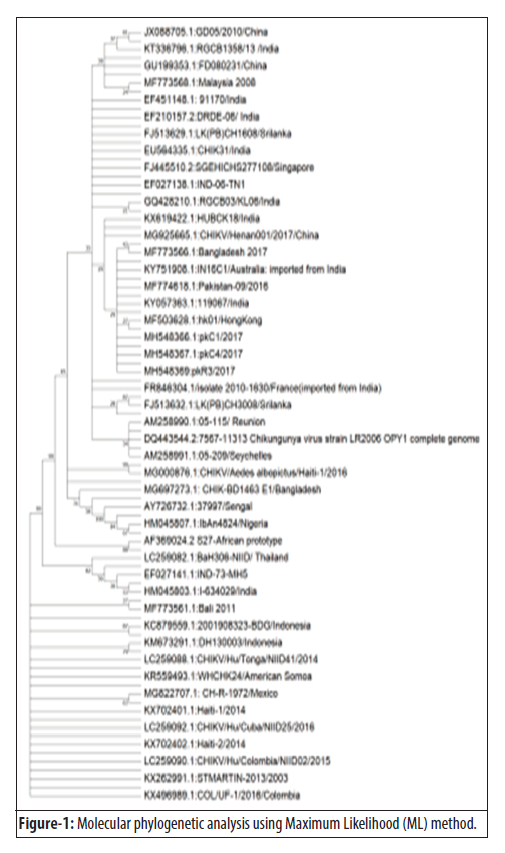 For structural and protein stability results, protein numbering and alignment was according to chains of 3N40. Structures that appeared after the alignment were noted (Figure2). 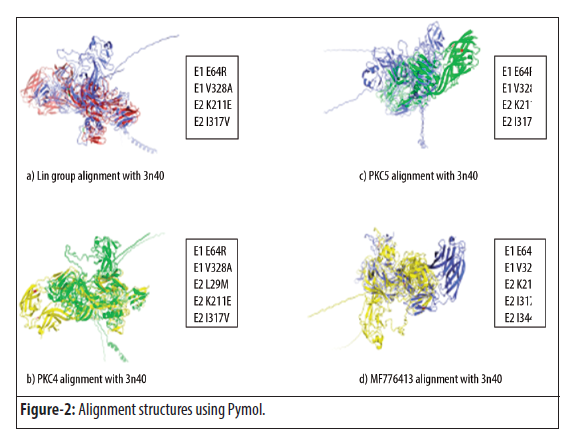 Chikungunya, a re-emerging viral infection is a major public health problem in tropical and subtropical regions.13 In 2016, the National Institute of Health, Pakistan, and the AFIP confirmed more than 4,000 cases through qualitative RT-PCR.6

A newly submitted strain sequence from AIIMS (All India Institute of Medical Science), Delhi (GenBank Accn No KY039475) of 2016 was also similar to the strains found in the current study. The strains reported from India in 1963 (EF027140) and 1973 (EF027141) were included in the Asian genotype along with one recent strain isolated in Nagpur, India, in 2003 (AY424803). Moreover, strains from Nigeria and Senegal were included in the WEF genotype.20

Our study reported mutations E64R (E1), K211E (E2), I317V (E2) and I344V (E2) which increased stability of protein. On the other hand, mutations V328A (E1) and L29M (E2) reduced stability of protein. In 2016, sequences of Pakistani strains isolated from confirmed CHIKV-infected human cases were reported for the first time, which affected more than 3,000 people in Pakistani population.27 This study showed that the Pakistani strains were highly similar to ECSA ancestry. Persistently, A. aegypti is responsible for the dispersal of ECSA lineage, and it was widely dispersed and common in Pakistan.28

Moreover lineage from eight Pakistani strains were closely related to the Indian strains and studies supported the fact that the Pakistani strains migrated from India. India is situated in the neighbourhood of Pakistan, and CHIKV epidemics occurred between the periods of 2006–2009, as a result of which a lot of people were affected. Because of poor precautionary and screening procedures at Pakistan-India border, airports or railway stations,29 CHIKV transmission occurred via infected travellers and mosquitoes. Moreover, Pakistan lies in tropical and subtropical regions which contain suitable temperature and climatic conditions, dirt, garbage and bad sanitary conditions, providing a suitable breeding place for the mosquitos. Aedes spp. CHIKV has been circulating in Pakistan for years but infections were unnoticed because of insufficient diagnostic facilities. As yet, there is no vaccine available against CHIKV. CHIKV species having a role in the transmission of disease bites throughout the day, but their peak timing is during the sunrise and the sunset. Measures should be taken to avoid the viral infection which includes wearing full-sleeved clothing, using insecticides and mosquito nets.30,31

The strains present in Pakistan belonged to the ECSA genotype derived from India and Southeast Asia.