Methods: The retrospective study was conducted at the Aga Khan University Hospital, Karachi, and comprised demographical, clinical and radiological data of patients with interstitial lung disease between October 2016 and October 2017 accessed through the outpatient data registry. Data was compared in terms of characteristics and key features of patients with connective tissue disease-associated interstitial lung disease with those of idiopathic pulmonary fibrosis. Statistical analysis was done using STATA 12.

Interstitial lung disease (ILD) comprises a heterogeneous group of conditions of different aetiologies that damage the lung parenchyma. These entities may manifest in varying degrees of inflammation and fibrosis that result in characteristic clinical, radiological and histopathological presentations.1 Idiopathic pulmonary fibrosis (IPF) is the most common chronic progressive fibrotic lung disease characterised by a histological and radiological pattern of usual interstitial pneumonia (UIP).2 The global prevalence of IPF is estimated at around 20 cases per 100,000 people for males and 13 cases per 100,000 people for females.3,4 ILD is also one of the most common and serious pulmonary complications of connective tissue disease (CTD), and is frequently observed in conditions such as rheumatoid arthritis (RA), systemic sclerosis, and Sjögren’s syndrome.5 CTD-associated ILD (CTD-ILD) refers to cases where the patient meets diagnostic criteria for ILD and has clinical features and/or serological markers for CTD. The prevalence of CTD-ILD is estimated at 17-37% of ILD cases, which may vary by region and population.6 A study in China identified CTD-ILD in 31% and IPF in 37% of the study population.7 In Pakistan, a study reported CTD-ILD and IPF prevalence of 10.4% and 40.4%, respectively.8

Distinguishing between CTD-ILD and IPF clinically is imperative due to differences in prognosis and treatment. Exclusion of an underlying CTD-ILD is crucial to making a diagnosis of IPF.9-11 The underlying radio-histological pattern has been shown to impact prognosis. The UIP pattern characterises IPF, while non-specific interstitial pneumonitis (NSIP) pattern is more common in CTD-ILD. Identifying the pattern as part of the ILD work-up is important as different patterns can have different prognosis. CTD-NSIP has better prognosis compared to IPF.11,12 In contrast, some studies have demonstrated that patients with CTD-UIP have similar prognosis as that of IPF patients.13-15

At present, there is limited data describing features of patients with CTD-ILD, and a dearth of literature representing populations in low- and middle-income countries (LMICs). The current study was planned to fill the gap by identifying the distribution of ILD subtypes and compare the demographic, clinical and disease characteristics of the two commonly observed forms of ILD presenting at a tertiary care hospital in LMIC setting.

The retrospective study was conducted at the Aga Khan University Hospital (AKUH), Karachi, and comprised demographical, clinical and radiological data of ILD patients between October 2016 and October 2017 accessed through the outpatient data registry. AKUH is a 650-bed tertiary care hospital serving a diverse patient population Karachi and its surrounding areas. The data was retrieved after approval from the institutional ethics review board. The data included was of all CTD-ILD patients who had been previously diagnosed with CTD and were under regular treatment and were following up with rheumatologists at AKUH. Data excluded related to patients aged <18 years and with a history of environmental or occupational exposures suggestive of hypersensitivity pneumonitis, and to those who had not undergone serological testing for CTD-ILD.

ILD diagnoses were established on international multidisciplinary consensus American Thoracic Society/European Respiratory Society (ATS/ERS) classification.16 Patients were grouped into two categories; CTD-ILD and IPF and were defined as CTD-ILD if they met the CTD criteria of the American College of Rheumatology (ACR)17-19 and IPF if they met the criteria of ATS/ERS16 and after exclusion of underlying CTD by clinical and serologic criteria.

Data was analysed using STATA 12. Absolute and relative frequencies and percentages were calculated to determine the spectrum of ILDs, which also included the common variants of CTD-ILD. Next, a comparative analysis between CTD-ILD and IPF was done, which highlighted differences in the demographic profile, comorbidities, symptoms and clinical presentation between the two groups. Binary logistic regression analysis was performed with IPF as the reference group in order to identify variables which were eligible for multivariable regression model. Variables having p<0.25 were considered significant at this stage. Following this step, a multivariable model was constructed using a step-wise approach by entering one variable at a time and performing a partial log-likelihood test at each step. The variable was retained in the final model when p<0.05 value was obtained. 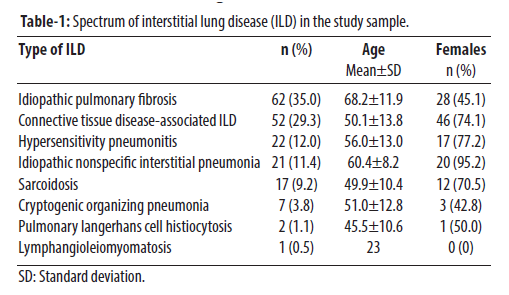 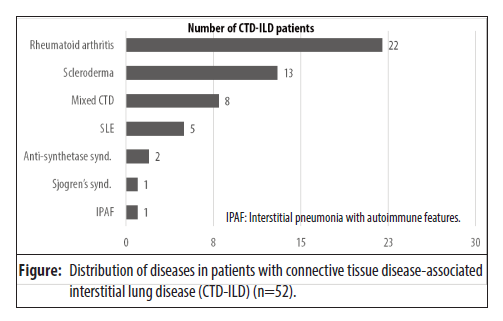 Of the total, data related to 114(62%) patients with CTD-ILD and IPF was subjected to comparative analysis, showing that compared to IPF patients, those with CTD-ILD were predominantly younger (p<0.001) and female (p<0.001), while history of gastroesophageal reflux disease (GERD) was significantly lower in CTD-ILD cases (Table 2). 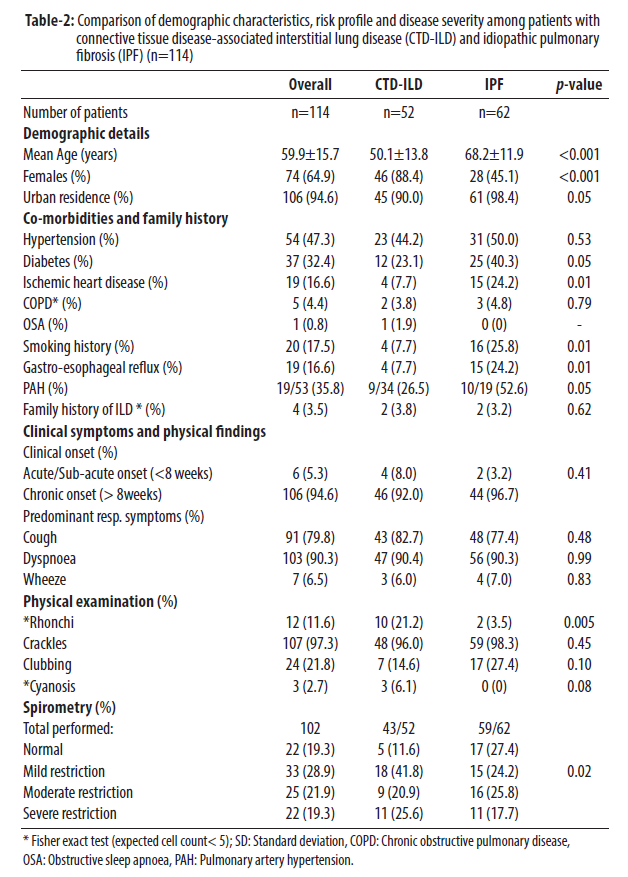 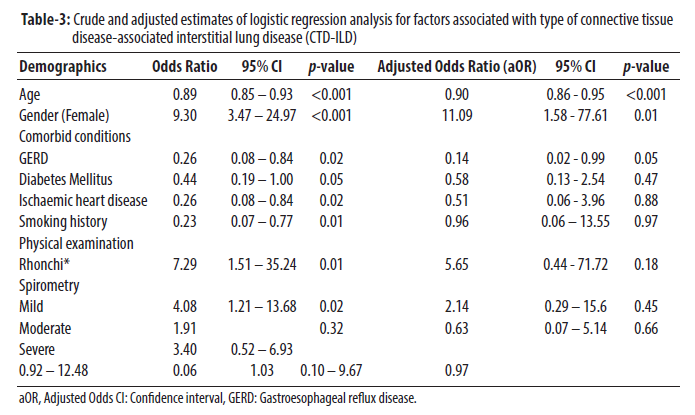 To the best of our knowledge, the current study is the first to provide insight into the burden of ILDs at a large tertiary care hospital in Pakistan. There was a predominance of IPF and CTD-ILD compared to other ILD variants in the sample. In general, CTD-ILD patients were found to be younger and predominantly female compared to the IPF patient profile. They also had decreased odds of reporting a history of GERD.

RA-ILD was identified as the most common presentation among CTD-ILD patients, followed by scleroderma. Although RA is the most common CTD, studies have demonstrated scleroderma as the CTD associated with the largest percentage of patients afflicted with ILD.21-22 The prevalent HRCT pattern associated with CTD-ILD was NSIP, but RA-ILD and scleroderma patients more commonly presented with UIP on HRCT. Some patients with interstitial pneumonia may have presented with autoimmune features, but they did not fulfill the criteria for CTD-ILD. This condition has recently been designated as interstitial pneumonia with autoimmune features (IPAF). We only identified one patient with IPAF.

Our registry enrolled a higher number of IPF cases compared to CTD-ILD, which is largely consistent with international data. A retrospective study comparing the clinical characteristics of CTD-ILD and IPF among the Han population in China reported a higher prevalence of IPF (36.9%) compared to CTD-ILD (31%).7 In contrast, a study in India reported hypersensitivity pneumonitis (HP) (47.3%) as the most prevalent ILD, followed by CTD-ILD (13.9%) and IPF (13.7%).23 The prevalence of CTD-ILD was also higher than IPF (34.8% vs 23.3%) in Saudi Arabia.24

Multivariable analysis in the current study identified a significant difference in age, gender and history of GERD between CTD-ILD and IPF cases, while other variables were not significant. The average age of the CTD-ILD patients was significantly lower than that of the IPF patients, which is consistent with earlier findings.23,25,26 IPF is an age-related disease with an average patient age of 65 years. Exposure to smoking and environmental agents is implicated in the disease process, and the accumulation over time of these exposures may contribute to the development of the disease in older patients. In contrast, CTD-ILD is related to autoimmune diseases, the majority of which affect younger people.27

The current findings support existing data about CTD-ILD patients being more likely to be female compared to IPF patients.14 Most autoimmune diseases preferentially affect females greater than males. The female-to-male ratio of systemic lupus erythematosus (SLE) and Sjögren’s syndrome, for example, is 9:1 and 9-20:1, respectively.28,29 In an Indian study, only 26.5% of CTD-ILD patients were males compared to 73.6% of IPF patients.23 In contrast to other studies, the current study did not identify a significant difference on multivariate analysis in pulmonary function testing severity or smoking status between CTD-ILD and IPF cases. This may be due to the limited sample size of the study. Patients with CTD-ILD often have better lung function at diagnosis compared to patients with IPF.30

The current study has its limitations, including a relatively small sample size. Also, there may have been some patients who were diagnosed with ILD in whom the extra-pulmonary manifestations of CTD had not appeared yet, hence, underestimating the number of CTD-ILD patients. Though this was a single-centre study, we are in the process of collecting data from multiple centres across the country as part of an ongoing national ILD registry. This data is expected to yield results of a nationally representative sample within the next few years and will contribute towards a growing body of evidence in this area, particularly in the context of patient prognosis.

The current study has underscored the need for prospective studies on CTD-ILD to understand the full spectrum of this disease and long-term clinical outcomes. There is a need to look at the multidimensionality of this disease and at the prognostic factors of CTD-ILD using longitudinal studies on a larger cohort from multiple centres.

CTD-ILD patients were found to be younger females with symptoms and pulmonary function similar to IPF. The multidisciplinary nature of CTD-ILD management suggests the need for greater collaboration between rheumatologists and pulmonologists.