Objective:  To evaluate the effect parental attitudes have on the dental caries experience of children.

Method: The cross-sectional observational study was conducted at Yeditepe University, Istanbul, Turkey, from March to September 2019, and comprised mothers of children who came to the Department of Paediatric Dentistry for treatment of children. Multi-variable poisson regression model was run to predict prevalence of dental caries. Mothers’ attitudes in family were measured using the parental attitude research instrument scores. Data was analysed using Stata 15.

Conclusion: Healthy family environment and empowering parental style had a positive effect on the oral health of children.

Recent studies have expanded research on the causes of childhood caries from biological to psychological and social factors.1 Being the smallest social unit that children interact with, families play a fundamental role in shaping the oral health behaviour of a child.2

A parent’s psychosocial factors are major determinants of oral health behaviour of children. These factors affect a child’s oral health through parent-child relations and is also a reflection of mother-father relations on a child’s behaviour. For example, cognitive qualities of the mother, such as knowledge about and attitudes towards healthy oral behaviours, are significantly correlated with a child’s propensity to establish oral hygiene routines.3 Likewise, a positive family environment where a child feels safe and supported reinforce good oral hygiene behaviour of the child.4 High levels of maternal stress5 and  poverty,6 on the other hand, tend to increase sugar consumption and the practice of poor oral hygiene practice of a child. There is a need to develop a better understanding of social and emotional context in which a child’s health behaviours develop, and specifically the need to identify which psychosocial factors in a family exacerbate or alleviate the risk of child caries.

Duijister et al.7 defined a well-functioning family as one that is “able to manage daily life and crisis tasks in the context of warm and effective family interactions through clear communication and defined roles and boundaries.” A poor-functioning family, on the other hand, suffers from weak, impersonal relationships often spiralling into protracted conflicts among its members due to poor behavioural control. Well-functioning families secure a healthy physical, social and emotional development for a child.8 Similarly, good parenting will affect oral health through brushing education, motivation, diet, etc. Indeed, studies have repeatedly shown that good parenting positively influences the oral health of a child.9-12 It, then, logically follows that different parenting styles may lead to different levels of caries prevalence among children.

Studies on paediatric dentistry have associated parental attitude research instrument (PARI) dimensions with oral hygiene behaviour10 and dimensions of parental attitudes derived from other indices on caries formation.11 Dursun et al. purported to correlate dimensions of PARI with incidence of caries in children, but the related statistical results were not presented in that study.13 The use of Poisson regression estimator allows for point predictions for change in expected count of caries and to control for intervening variables, carrying the analytical power of a study beyond conventional correlational analyses.

The current study was planned to evaluate the effect parental attitudes have on the dental caries experience of children.

The cross-sectional observational study was conducted at Yeditepe University, Istanbul, Turkey, from March to September 2019. After approval from the institutional ethics review committee, the sample size was calculated with p=0.50, confidence interval (CI) = 95%, and power = 80%. The sample was raised from among mothers who visited the Department of Paediatric Dentistry for treatment of their children aged 6-15 years. One child per mother was set as the baseline criterion.

The data was collected via surveys from mothers after taking informed consent from all the respondents. Those who did not volunteer were excluded. Due to the socioeconomic structure of Turkey, it is often the mothers who take their children for routine medical treatments, and, following Perera et al.14 and Abiola et al.9 data only from the mothers were collected. Since the sample would not offer meaningful variation otherwise, confining the sample to mothers allowed the researchers to control the gender dimension of the parent.

The children underwent intraoral examination while seated in a dental chair. The teeth were air-dried and examined using a dental mirror by a single examiner. The dental examination was conducted in the light of the ‘Oral Health Surveys: Basic Methods’, of the World Health Organisation (WHO).15 The total number of decayed (D), missing (M), or filled (F) teeth (T) in a patient is called the DMFT count and refers to the total number of caries in permanent teeth, while the total number of caries in the primary teeth is referred to as ‘dmft’ in small letters.15 The DMFT and dmft scores were calculated by adding the number of decayed, missing and filled teeth. A missing tooth was counted only if records indicated an extraction was due to caries. Missing teeth due to dental trauma, hypo-mineralisation, agenesis or routine exfoliation were not included in the DMFT or dmft scores. Enamel caries lesions were also excluded.

A self-administered questionnaire comprising PARI and sociodemographic data was handed out to the mothers. PARI was used to identify a parent’s attitudes in his or her interactions with family.16 The scale was later adapted to Turkish language.17 The instrument consists of 60 items and allows the construction of scores on five sub-dimensions; the extent of mothering or overprotection, democratic-/egalitarian-orientation, attitudes towards rejection of homemaking role, the presence of marital conflict, and the level of discipline (Appendix). 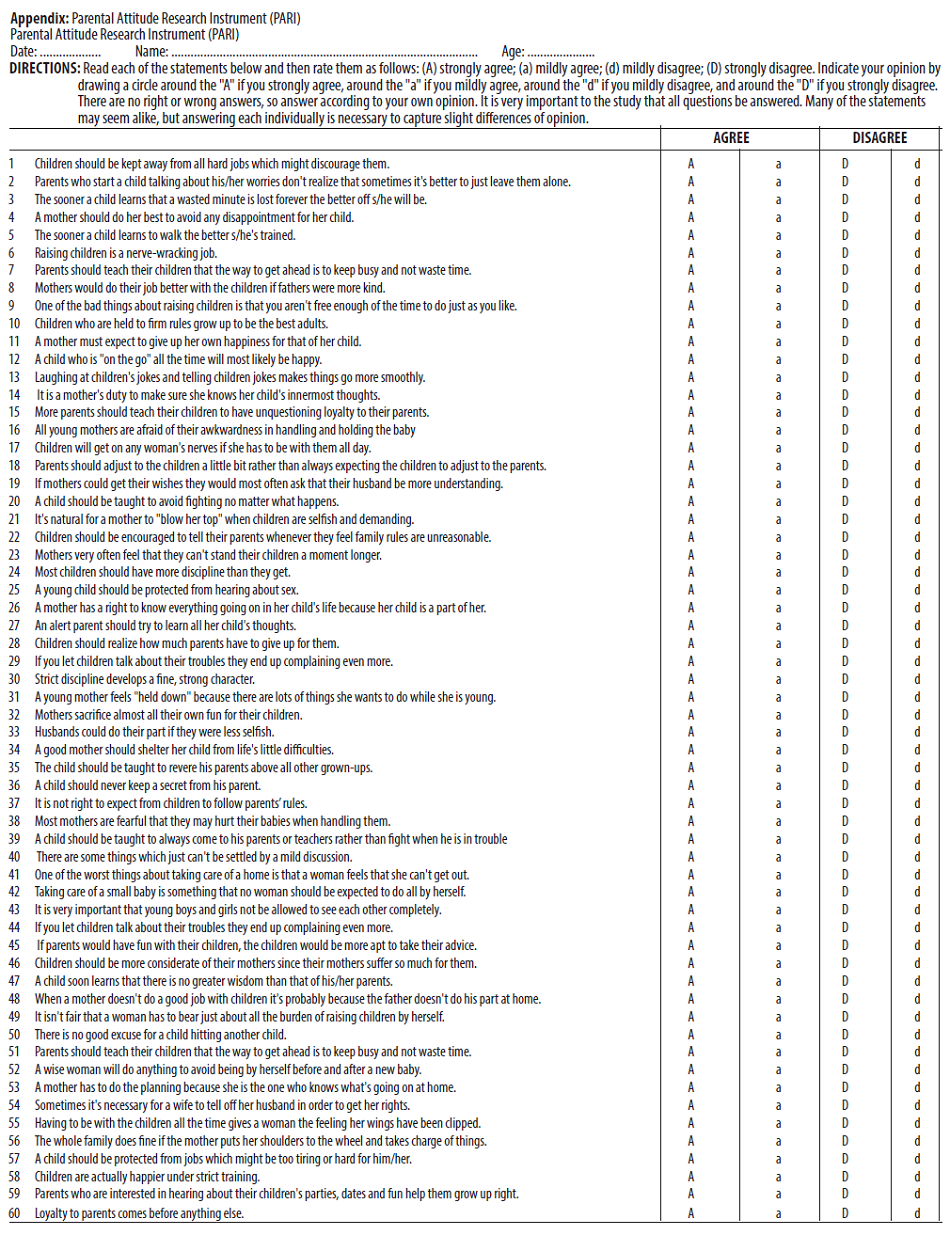 The scores for these sub-dimensions are derived by adding individual points from each question belonging to that sub-category.16 The questions used for the subgroups are mutually exclusive and totally exhaustive.  Higher scores indicate stronger inclinations for each dimension. The survey was administered immediately at the end of the dental examination.

Data was analysed using Stata 15, with the Poisson command. Marginal effects were calculated using the S-Post post-estimation package. To address potential multi-collinearity, separate regressions were also run with one PARI dimension per model. The results from these additional regressions remained substantially the same. 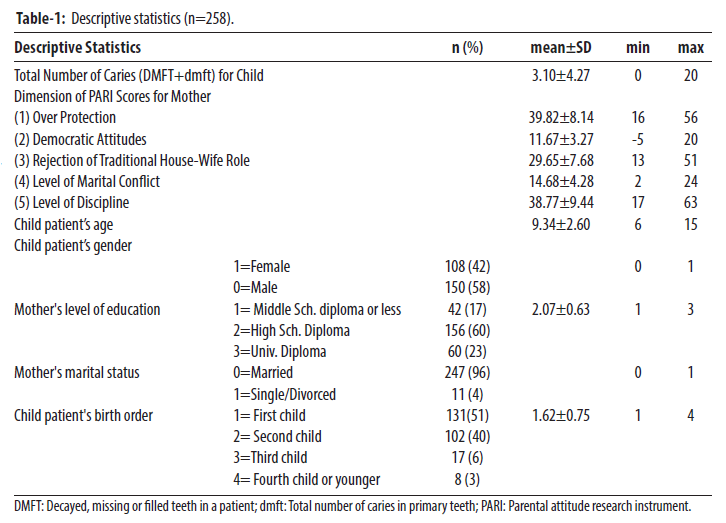 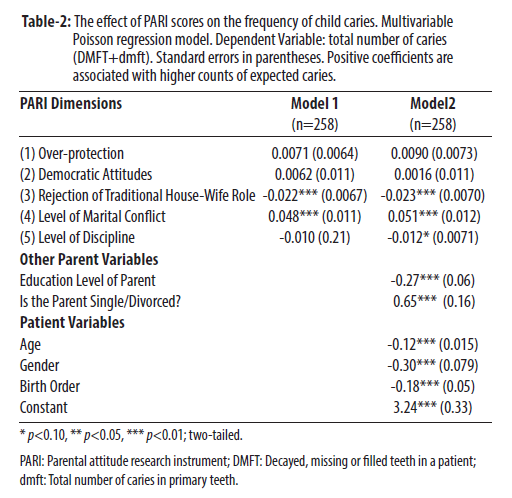 The adoption of good oral health habits in childhood leads to better health and quality of life later in life.9 The relationship between parenting and oral health of children is a burgeoning field of research.9-13 The main findings of the current study is that certain parental attitudes and prevalence of caries in children are significantly correlated.

The results indicated that the psychological attitudes of a mother were correlated with prevalence of caries. Among the five factors of PARI scores, PARI Factor 3 ‘rejection of traditional housewife role’, and Factor 5 ‘level of discipline’ had a statistically negative correlation with the prevalence of DMFT+dmft. Factor 4 ‘level of marital conflict’ had a statistically positive correlation with caries experience. These three psychological traits can be linked to stress, and, hence, we can tentatively posit that having a more stressful mother leads to a higher caries experience for the child.

Children of women rejecting traditional housewife roles tended to have less number of caries. In Turkey, mothers are given immense responsibilities as housewives, in addition to being a partner, a parent and a professional. Daily chores, such as cooking, cleaning and a child’s everyday needs, can easily overwhelm a mother, and takes a significant toll on a mother’s social life and emotional well-being. Instilling healthy habits in a child, such as good oral hygiene practices, or table manners, on the other hand, requires healthy commitment from a mother. Further research is needed to explore the exact mechanism underlying this finding.

The results also suggested that mothers who exerted more discipline tended to obtain better oral health for their children. This finding is in line with studies that argue disciplined approaches do not necessarily lead to negative effects in oral health.19,20

Higher levels of marital conflict in the family significantly increased caries prevalence in children, which is in agreement with an earlier study.12 Some studies reported that children exposed to destructive parental conflict are at risk for a range of other health difficulties, such as digestive problems, fatigue, reduced physical growth, headaches, abdominal pains, and sleep problem.21 The current findings added prevalence of caries to this growing list of symptoms.

Parents with a democratic and egalitarian style exercise child rights in the family, sharing tasks and responsibilities while adopting a friendly approach.17 Supervision and love are both present in the democratic parenting style, promoting self-reliance.22 Such self-reliance, in turn, is more likely to translate into sustained oral hygiene behaviour and positive oral health outcomes in children. The results of the current study, however, did not support this line of argument. The final dimension of parenting style is overprotective mothering. Overprotective mothers are more sensitive to maintain the child’s ego, hence, filter outside factors that may challenge a child emotionally. Such parenting philosophy may potentially erode coping strategies of the child, which may result in poor oral hygiene behaviour and increased sugar consumption.23 Again, the findings of the current study did not show any significant correlation between overprotective mothering and prevalence of caries.

Low parental education is considered one of the predisposing factors leading to poor child health, including oral health. Rajab et al.24 reported that highly educated parents cared more about their children's oral health. Low levels of parental education and socioeconomic status contribute to poor dietary habits and unhealthy lifestyles.25 The current study showed that patients whose mothers had higher levels of education tended to have less dental caries. In addition, family structure is associated with dental attendance patterns and that single mothers with children are at particular risk for failing to monitor their oral health appropriately.26 The current study exhibited similar findings.

21.    Troxel WM, Matthews KA. Review: What are the costs of marital conflict and dissolution to children's physical health? Clin Child and Family Psych 2004; 7: 29-57.