Objective: To compare improvement in symptoms following Heller's myotomy with Dor fundoplication and endoscopic pneumatic dilatation for the treatment of achalasia cardia.

Methods: The prospective comparative study was conducted at the Department of Upper Gastroenterology and Minimally Invasive Surgery, Civil Hospital, Karachi, from February 2016 to January 2019, and comprised patients diagnosed with achalasia cardia on oesophageal manometry. The subjects were randomised into endoscopic pneumatic dilatation group A and laparoscopic Heller's myotomy with Dor fundoplication group B. Eckardt scores were compared between the groups at one-year follow-up. Data was analysed using SPSS 22.

Conclusion: The efficacy of Heller's myotomy with Dor fundoplication was found to be greater than endoscopic pneumatic dilatation for improvement in dysphagia and overall patient satisfaction at one-year follow-up.

Achalasia is an uncommon condition characterised by failed relaxation of the lower oesophageal sphincter (LES).1 The pathogenesis is unknown, but it is thought that a viral infection in a genetically-susceptible individual triggers gradual loss of nitrergic neurons in the LES over several years.2 The incidence quoted in the literature per 100,00 population varies from 0.03 to 1.63 and there is no difference between the genders.3-5 There are currently three established treatment modalities: endoscopic pneumatic dilatation (PD), surgery which is most commonly done by laparoscopic Heller’s myotomy, and endoscopic botulinum toxin injection. Per oral endoscopic myotomy (POEM) is a recently developed technique for treating achalasia, but it is not widely performed. The first open surgical myotomy was performed in 1913. Partial fundoplication was added to the procedure later on in the 1950s when long-term results of the procedure revealed post-operative gastro-oesophageal reflux (GER) as a significant problem.1 The first laparoscopic myotomy was performed by Shimi et al.6 In 1970, Witzel thought of using balloon attached to the endoscope for through-the-scope balloon dilation.7 A success rate of over 90% have been reported with laparoscopic DOR.8 A recent randomised control trial (RCT) compared PD with laparoscopic HM.9 Outcomes were reported in 201 achalasia subjects with success rates of >90% for each modality at 1-year follow-up. Five years after enrolment, 128 subjects remained under active follow-up in the trial, and there was still no difference in outcomes between the two treatment modalities. As a chronic disease for which the underlying aetiology is incurable, long-term outcome data following intervention is essential. The current study was planned to provide one-year comparative outcome data on symptomatic improvement of achalasia after Heller's myotomy with Dor fundoplication (HM-Dor) and endoscopic PD.

The prospective comparative study was conducted at the Department of Upper Gastroenterology and Minimally Invasive Surgery, Civil Hospital, Karachi (CHK), from February 2016 to January 2019, after getting approval from the institutional review board. The sample size was calculated at 80% power and 0.05 alpha error while keeping the frequency of symptomatic improvement in PD and HM-Dor groups at 50% and 89% respectively.1

The sampling technique was non probability convenience sampling. The sample was rasied from among patients presenting to CHK Surgical Units 4 and 5 with a diagnosis of achalasia. Patients who had previous intervention, either endoscopic or surgical, for achalasia were excluded.

Achalasia diagnosis was made with endoscopic findings of dilated oesophagus and tight oesophagogastric junction (EGJ) along with absence of pseudo-achalasia. All patients were further evaluated with high-resolution manometery HRM) and were classified into HRM type I with incomplete LES relaxation, aperistalsis and absence of oesophageal pressurisation, HRM type II with incomplete LES relaxation, aperistalsis and pan-oesophageal pressurisation in at least 20% of swallows, and HRM type III with incomplete LES relaxation and premature contractions (distal latency [DL] <4.5 seconds) in at least 20% of swallows. Some patients already had barium swallow before they presented to the unit, and the findings of dilated oesophagus along with a bird beak deformity was taken as confirmation of the diagnosis. Eckardt scoring2 was done for all patients and those with a score of 3 or less were excluded. After informed consent and briefing the patients about PD and HM-Dor, they were randomly allocated, using sealed envelopes, to PD group A and HM-Dor group B. PD was done in the endoscopy suite under fluoroscopic guidance. Sedation and analgesia were managed with midazolam and nalbuphine given intravenously (IV). Propofol was used where required by the anaesthetist. Olympus achalasia balloon dilators (BA-1 [30mm], BA-2 [35mm] and BA-3 (40mm]) were used for dilatations. Initially, the 30mm balloon was positioned across the EGJ and inflated for 1 minute. Patients were kept for several hours till stable or were retained overnight if symptomatic. Eckardt scoring was done at 1 week post-procedure, and patients with no change or minimal change of score were rescheduled for dilatation with the 35mm balloon. Again, at 1 week post-procedure Eckardt score was taken, and, if not changed, the patients were scheduled for dilatation with the 40mm balloon. In case of no symptomatic improvement in terms of Eckardt score, these patients were labelled as treatment failure. Any patient who had worsening of symptoms within 1 year of the initial improvement was also considered a treatment failure.

In group B, the patients underwent laparoscopic Heller’s cardiomyotomy and Dor fundoplication, where the hiatus was dissected anteriorly and myotomy was done extending up to 5-6cm towards the oesophagus and 2cms towards the stomach, saving the anterior vagus nerve. After freeing the fundus of stomach, anterior Dor fundoplication was done. Patients were discharged on 2nd postoperative day and on follow-up visit at 1 week they were assessed with Eckardt score to see improvement in symptoms. In case of no improvement, repeat manometry was done at 1 month. If the manometry showed no improvement, the patient was labelled as treatment failure. Follow-up was done for 1 year in terms of symptoms improvement using Eckardt score, while satisfaction with procedure was assessed on a five-point Likert’s scale. Post-operative Eckardt score ≤3 was considered treatment success. 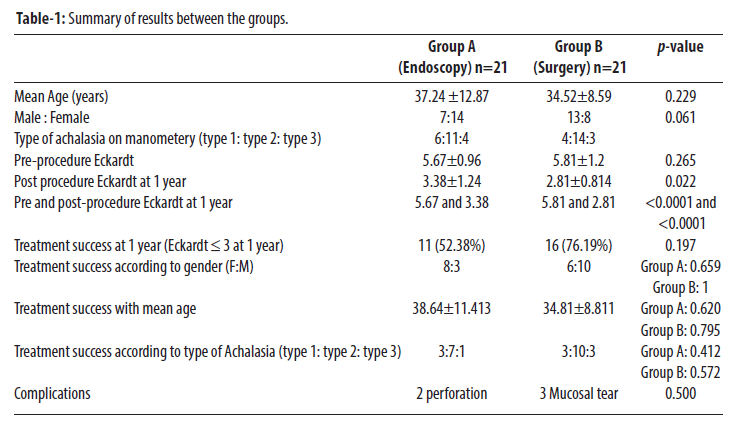 Patient satisfaction was significantly more in group B (p<0.05) (Table 2).

Treatment success in relation to gender and age did not show any significant difference (p>0.05). There was no mortality at 30 days in either of the two groups.

Studies have shown that patients’ response to various therapies differs and recurrence can occur post-intervention. There are certain prognostic factors that can be used to tailor the most appropriate treatment option for different individuals.10-12 The current study had more males in the surgery group than in the endoscopic group, which could have been one of the factors influencing better results in the surgical group, but the difference in the male-to-female ratio between the groups was not significant. Also, treatment success rates in patients aged below and above 40 years did not show any significant difference.

For many years, achalasia has been treated mainly through PD, leading to therapeutic success rates of 86% and 85% over 2 and 5 years, respectively.13 Of those who are successfully treated, at least 25% require a minimum of one repeat dilatation within 5 years. This technique does not require hospitalisation, is widely available, and has a lower cost in comparison with other methods.14 Even today PD is the most commonly used treatment modality, but, because the radial dilatation effect of PD is confined to the EGJ, PD is recommended for treatment of achalasia types II.15-17

A meta analysis18 concluded that PD is not very effective modality for type I or III achalasia. The results of the current study support the earlier finding.

The current study had almost 100% response in HM-Dor group for type 3 achalasia, which can be accounted for by a small sample size. More studies with a larger sample size are needed to get an exact picture.

Our post-operative Eckardt score at 1 year was significantly better for HM-Dor group compared to the PD group. A large European RCT comparing PD with laparoscopic HM showed 5-year durability of 82% versus 84% for PD and surgery groups respectively.8 Another study19 demonstrated results in favour of PD compared to HM for achalasia. A study19 reported no mortality with HM, while the current study had no mortality in both the groups at 1-year follow-up. Two patients had perforation in the PD group, while 3 had minute mucosal tears, which were repaired and did not have any significant effect on the post-operative course of the patient in terms of time to oral intake and discharge. Both the perforations in the PD group were managed conservatively and the patients were subsequently discharged without any adverse effects. Results were comparable with those of other studies.20-23

Of all the modalities, PD and HM are most commonly used treatment options for achalasia. Single-centre studies have shown very encouraging results with HM group.20-22 However an RCT and a cross-sectional follow-up evaluation did not show any superiority of HM over PD in terms of therapeutic success at two-year follow-up.7,23 The limitations of the current study included its single-centre status, a small sample size, and a short follow-up of one year.

The efficacy of HM appeared to be greater than PD in terms of improvement in Eckardt score and overall patient satisfaction score at one-year follow-up.