The Role of K-Ras and P53 in Biliary Tract Carcinoma

Objective: To focus mainly on the role of proto-oncogene Ki-ras2 Kirsten rat sarcoma viral oncogene homolog (K-Ras) and tumour-suppressor gene p53 which are among the most commonly mutated genes in biliary tract carcinomas.

Methods: The systematic review comprised research articles published between 2002 and 2019 on PubMed and Google Scholar databases which were searched using the terms ‘TP53’, ‘K-Ras’, ‘mutation’, ‘biliary tract carcinoma’, ‘cholangiocarcinoma’, and ‘murine model’. Repetitions, duplicates and irrelevant articles were excluded. No data was retrieved from posters, presentations and symposiums, and experiments involving bile aspirations were also excluded.

Conclusion: K-Ras and p53 mutation both contribute to biliary tract carcinoma. K-Ras mutation, however, has a much higher frequency compared to p53 inactivation in such cancers.

Biliary tract cancers (BTCs) are among the most aggressive and highly fatal, malignant tumours1 with cholangiocarcinoma forming the second most common form of hepatobiliary cancer.2,3 Hepatobiliary carcinomas include gall bladder, intrahepatic, perihilar and distal biliary tree cancers, with the majority being classified as Klatskin tumours, which form at the site where the right hepatic duct joins with the left hepatic duct in the liver.1 Cholangiocarcinoma, carcinoma of the gall bladder specifically, is divided into four types: tubular adenocarcinomas, papillary adenocarcinomas, mucoid carcinomas, and undifferentiated carcinomas.4 These invasive carcinomas mainly arise from the epithelium lining of gall bladder and the bile ducts. The most important among them are the biliary intraepithelial neoplasia (BiIIN).

BTCs have poor prognosis with five-year survival rates being 30-50% for resectable tumours and <5% for unresect¬able cases.6 Old age, obesity, bile duct inflammation, presence of biliary cysts, infection with the liver fluke parasite, diabetes and pre-existing medical conditions, such as primary sclerosing cholangitis and chronic ulcerative colitis, predispose an individual to such cancers. However, a number of molecular alterations have also been identified to be involved in the pathogenesis of hepatobiliary carcinomas. Allelic loss of p53 and bcl-2 and oncogenic activation of the proto-oncogenes such as Kirsten rat sarcoma (K-Ras), master regulators of cell cycle entry and proliferative metabolism are c-myc, c-neu, c-erb-B2, c-met, receptor tyrosine kinases, cyclooxygenase-2 (COX-2) and human aspartyl (asparaginyl) beta-hydroxylase fall in this category. Mutations in K-Ras and p53 genes are found to be the most common genetic alterations in BTC patients.

K-Ras gene, encoded by the K-Ras viral gene homolog,7 acts through the K-Ras / Mitogen-activated protein kinases (MAPK) cell signalling pathway.8 On a molecular level, several germline point mutations have been identified in the K-Ras gene that result in the alteration of both structure and function of the corresponding protein with each protein having different molecular pathways. K-Ras mutations account for the pathogenesis of half of human cancers, including BTCs. Single amino acid substitutions are commonly found in codon 12 Glycine12Serine (G12S) genotype/ exon 1) and codon 13 in exon 1 of the K-Ras gene, while mutations have also been detected of a lower frequency in codons 61, 63, 117, 119 and 146.7 The oncogenic mutation in codon 12 results in the single amino acid substitution (Glycineaspartic acid/ valine/ arginine) and activates the Guanosine triphosphate/ Guanosine diphosphate (GTP/GDP) binding protein, which upon activation initiates a pathway that terminates in the unregulated proliferation of cells.9 K-Ras is also known to upregulate Glusocse tranporter 1 (GLUT-1) transporter in cells, thereby contributing to the Warburg effect, or unlimited proliferation of cells with energy derived from anaerobic glycolysis in preference to aerobic glycolysis due to increased uptake of glucose, in cancer cells.10

Tumour protein (TP53) gene is a tumour suppressor gene located at 17p 13.3.9 It plays a central role in the pathogenesis of BTCs too, accounting for 30% of all gall bladder carcinomas. P53 controls the gap 1 (G1/S) phase and growth 2 (G2/M) phase of the cell cycle11 allowing cycle cell arrest and deoxyribonuclease acid (DNA) repair to occur. Inactivation of p53 gene due to a mutation from exon 5 through exon 8 results in unregulated cell proliferation without DNA repair, which, in turn, results in tumour formation.12

The current systematic review was planned focussing mainly on the role of proto-oncogene K-Ras and tumour-suppressor gene p53 which are among the most commonly mutated genes in BTCs. 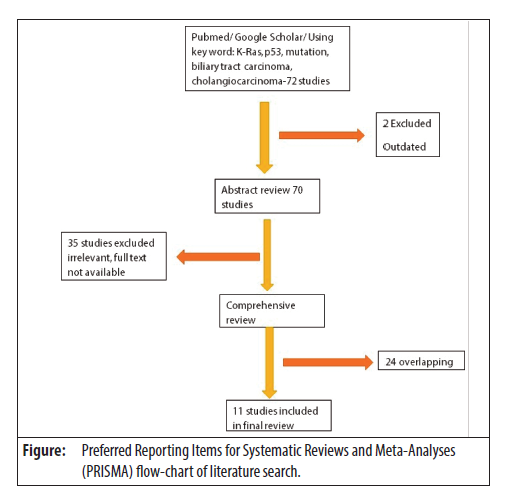 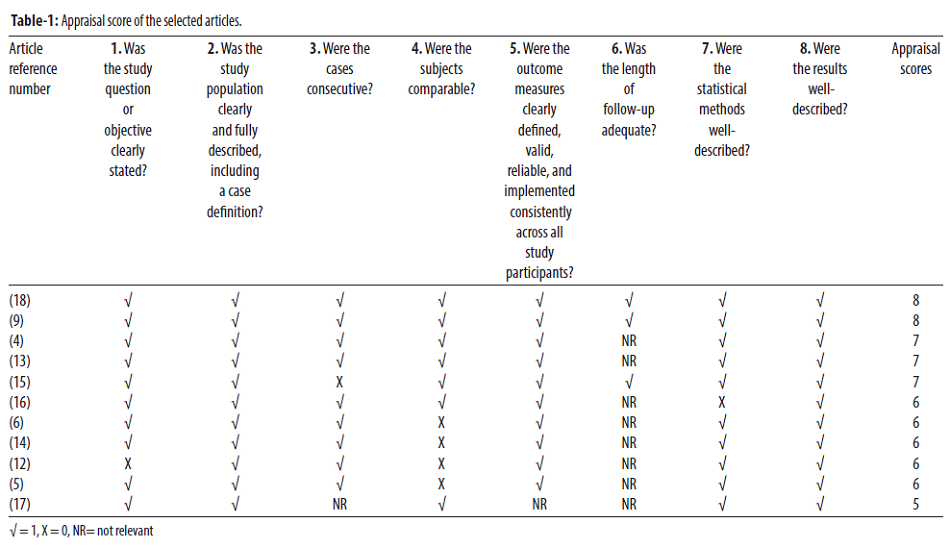 Several studies that report a positive correlation between K-Ras mutation and BTC incidence were mainly from Taiwan, China and Japan. One study done in Taiwan in June 2017 showed that 24.2% of the total 182 biliary tract cholangiocarcinoma patients were identified positive for K-Ras mutation. K-Ras point mutations were detected in 7.6% of IHCC patients, 13.3% of common bile duct cancer patients, and 3.3% of gallbladder carcinoma patients, indicating the potential role of K-Ras mutation in the pathogenesis of hepatobiliary carcinomas.13

In another group from the Taiwanese population, 16.8% of the 137 BTC patients were positive for K-Ras mutation.  Paraffin-embedded specimens resected between 1995 and 2004 were identified with K-Ras mutation, with 22 of these located at codon 12 and only one in codon 13.14

In a retrospective analysis of IHCC specimens from 50 Japanese patients who underwent hepatectomy between May 2009 and August 2016, 32% showed mutations in K-Ras. Patients with K-Ras mutations exhibited a shorter overall survival (OS) compared to those with wild-type K-Ras.15 In the same study, the association of K-Ras mutation with increased GLUT-1 expression in tumour was also identified.15

From the Chinese population, K-Ras mutation was detected in 38.2% of the 34 patients diagnosed with cholangiocarcinoma in 2011.16

Role of p53 inactivation in BTC: A study conducted on a sample of Chinese population showed a positive correlation between p53 mutation and BTCs. From a sample of 36 frozen specimens resected between April 2000 and May 2005, p53 gene mutations were found in 61.1% of the specimens.4

Combined role of p53 and K-Ras mutations in BTC: Other studies report a positive relationship of both K-Ras and p53 mutation/overexpression with BTC. In a Japanese cohort of 86 patients with hepato-pancreaticobiliary disease who were treated between March 1994 and May 1998, 4 patients reported to have p53 mutation (3 in exon 7 and 1 in exon 8), and 2 patients were identified positive for K-Ras mutation in codon 12.9

In a retrospective analysis of 63 Japanese patients diagnosed with BTC between January 2005 and December 2011, K-Ras mutation was identified in 14% patients, of whom 2 patients had gall bladder carcinoma and 7 had extrahepatic cholangiocarcinoma.6 Of these, the Glycine 12 Aspartic acid (G12D) mutation was identified in 5 BTC patients, Glycine12Serine (G12S) in 1 BTC patient and Glycine12Valine (G12V) in 3 patients. In the same study, TP53 overexpression was also identified in 48% patients.6

The combined role of K-Ras mutation and p53 inactivation has also been studied on murine models in the United States in 2012. Mice with conditionally activated allele for K-Ras were cross-bred with those with conditional knock-out allele for p53 to evaluate the combined effect of K-Ras mutation and p53 inactivation on their off-springs. The results were then compared with mice engineered with K-Ras mutation only. On analysis, p53 was implicated in the acceleration of development of intra-hepatic cholangiocarcinoma (IHCC) in mice with K-Ras mutation. While most of the mice with K-Ras mutation developed IHCC by the age of 15 months (75 weeks), p53 inactivation resulted in the acceleration of tumour genesis by initiating the development of IHCC in mice as early as 8 months (32 weeks). With p53 inactivation, the mean survival of mice decreased from 14 months (56 weeks) to 2 months (9 weeks), confirming the role of p53 inactivation in decreasing the latency of the disease in mice with K-Ras mutation. While mutation of K-Ras results in hyper-activation of extracellular signal-regulated kinases like Erk Ras/ Raf/ Mek pathway, p53 upon deletion further escalates this process by its loss of control on the hyperactive cell cycle and apoptosis of K-Ras mutated cells.17 Moreover, it was noted that on the exposure of mutagens, the predominant cancer observed in the mice liver was of biliary phenotype with hepatic cholangiocarcinoma (HCC) being a rare finding. This suggests that either K-Ras and p53 shift cellular differentiation of hepatic cells to biliary phenotype or that biliary cells have an increased susceptibility to developing KRas mutation. Moreover, the histological features of cells implicated in IHCC showed a marked similarity to that in human IHCC, further strengthening the validity of the results stated above.18

The OS of hepatobiliary carcinoma patients with K-Ras mutation was found to be significantly shorter than that of those with the wild-type K-Ras gene6 as has also been reported by another study in Japan in 2018.15 However, it is believed that this is probably due to the worse treatment outcomes in K-Ras mutation-positive patients.

In Japan, it has been reported that the one-year survival rate after resection is zero in patients positive for K-Ras and p53 mutation, and it is 15% in those who were not, but the difference was non-significant (p=0.65).9 This may be because most patients who had K-Ras and p53 mutation were diagnosed with stage IV of hepatopancreatobiliary disease and, therefore, had lower chances of survival.9 Moreover, even though a correlation is observed between these biomarkers, no correlation has been established with the resectability rate or the one-year survival rate after surgical resection of the gall bladder or the biliary tree.9

BTCs follow the sequence of local invasion, vascular invasion and regional lymph node metastasis to distant metastasis to the liver, pancreas, hepatic portal vein, hepatic artery and lymphatic systems.19 For such aggressive tumours, surgical resection is the final curative management. Neo-adjuvant therapy involving chemotherapy, radiation, chemo-radiation, or photodynamic therapy has been known to increase chances of curative resection.20,21 However, in some studies, radiation and chemotherapy have not been considered to be the effective means of treatment for inoperable BTCs.14 In fact, poor prognosis of the disease is associated with a high rate of relapse in the very few patients who manage to undergo a potentially curative surgical resection.4

Within intraductal papillary neoplasms, invasive tumours have a worse prognosis with a two-fold higher risk of death compared to the non-invasive tumours. Only the oncocytic type of invasive carcinomas show an exceptionally better prognosis than the other invasive types, like tubular and colloid-mucinous. This is primarily due to the fact that of all the invasive types of intraepithelial neoplasms of the biliary tract, only the oncocytic type showed no identification with K-Ras mutation.12 The tubular and colloid-mucinous types, on the other hand, showed a high degree of association with K-Ras mutation, accounting for a poor prognosis.

K-Ras and p53 mutation both contribute to the pathogenesis of BTC. K-Ras mutation, however, has a much higher frequency compared to p53 inactivation in such cancers. Moreover, biliary tract tumours positive for K-Ras mutation have a worse prognosis compared to those with wild-type K-Ras. However, the molecular profile behind BTC pathogenesis still remains to be widely explored. Once the exact molecular pathways are identified, the goal of precision treatment of patients for better prognosis can be achieved.

Acknowledgement: We are grateful to the Department of Biological and Biomedical Sciences, Aga Khan University, Karachi.

Conflict of Interest:  None.