A retrospective study was conducted to determine the profile and outcome of patients who experienced in-hospital cardiac arrest (IHCA) in an emergency department (ED), from January to December 2017. Newborns of day one till children 14 years of age who suffered cardiac arrest during their stay in the ED of National Institute of Child Health, Karachi, Pakistan, were included in the study. The outcome variables were the return of spontaneous circulation and survival before final discharge from the ED. IHCA was observed in 935 (4.82%) out of the 19,385 children studied, while in 568 (61%) children spontaneous circulation was restored. Most of the patients who suffered IHCA were infants, i.e. 719 (77%). A significant association of return of spontaneous circulation and survival till final discharge from the ED was observed with age (p-value <0.001) and mode of arrival at the hospital (p-value <0.001). Thus, IHCA was reported in approximately five percent of patients and return of spontaneous circulation was reported in 61 percent.

In-hospital cardiac arrest (IHCA) is a fatal issue that is experienced in paediatric emergency on a daily basis. Published literature from developed countries has reported that the survival rate of paediatric IHCA has improved over the years.1-3

American Heart Association (AHA) has noted an increased return of spontaneous circulation (ROSC) after IHCA with a jump from 39% to 77%, and survival till discharge from hospital improved from 24% to 43%.1 Another large longitudinal study reported a considerable improvement in the survival in children after cardiopulmonary resuscitation (CPR).2 Though limited studies are available regarding IHCA in paediatric population from developing countries like Pakistan, survival rate of IHCA among paediatric patients is low.4

The rationale of this study is that in the emergency department (ED), at the National Institute of Child Health (NICH), Karachi, Pakistan, almost 90 percent of physicians and nurses are BLS (Basic Life Support) trained and we wanted to see where we stand in terms of rate of ROSC after CPR for IHCA.

A retrospective study was conducted at the ED of NICH from January to December 2017 among children in whom cardiac arrest was noted and CPR was performed during their management in the ED.

The study was approved by the Ethical Review Committee of the NICH (Ref #: 04/2018) with a waiver of requirement for informed consent from parents or caregiver.

The ED of NICH is one of the largest in the country for children with a capacity of around 50 beds along with a well-established triage and a separate resuscitation room for critical patients.

The ED runs its operations through a public-private partnership and receives support from an NGO (non-governmental organisation), ‘ChildLife Foundation’ in terms of human resource, maintenance, skill development and training, medicines and software systems for the last six years with sustainability and quality improvement initiatives.

The age group included was from a newborn of day-1 till the age of 14 years and in whom cardiac arrest was noted some time during their stay and management in the ED. Those who had suffered out-of-hospital cardiac arrest (OHCA) were excluded from the study.

Epi info sample size calculator was used for the estimation of sample size taking confidence interval at 99%, margin of error at 1%, reported prevalence of ROSC in paediatric patients with cardiac arrest at 43.2%.5 The estimated sample size was 16,019 cases.

All medical records in the ED are saved in the software system called HMIS (Health Management Information System). Patients’ clinical assessment and reassessment along with vitals, time to time intervention and treatment given in the ED can also be seen retrospectively along with CPR records with details such as either OHCA or IHCA with outcome of ROSC achieved or not and final outcome till management at ED.

Outcome was seen in all the patients with IHCA especially those patients who achieved ROSC and their survival till emergency room management. 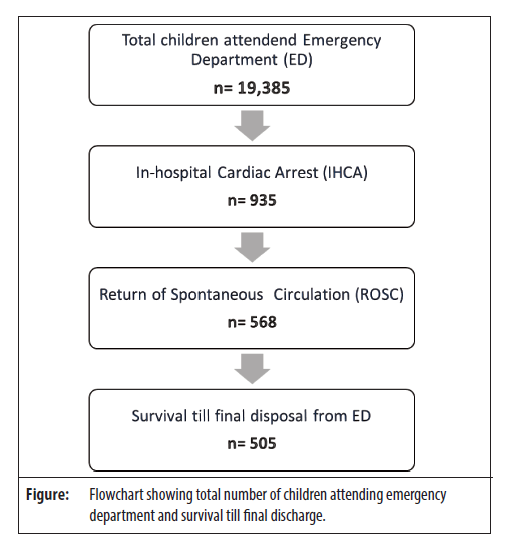 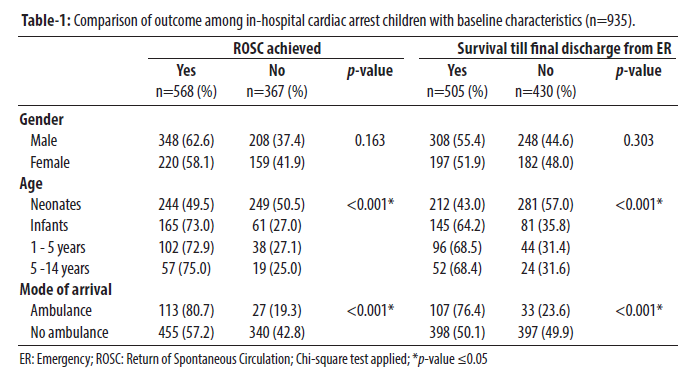 Survival until final discharge from the ED was also statisitically and significantly associated with age (p<0.001) and delivery mode (p<0.001). (Table-1) 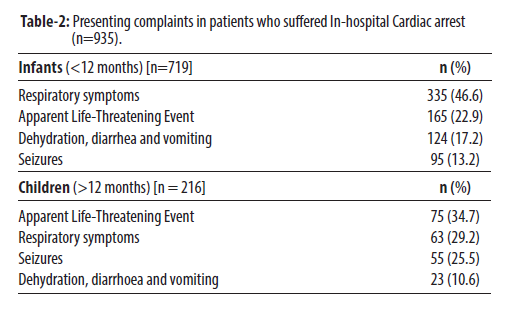 In our study, ROSC was achieved in approximately 61% patients and overall survival till ED management was 54%. The rate of ROSC was better in the above neonatal age group; similarly the survival rate till management at the emergency department. Somewhat similar findings were reported in a previous study. However, ROSC was better in children aged less than 12 months in that study.5 The reasons behind high mortality among neonates in the current study is respiratory failure, late arrival after delivery and other reality factors in our set-up, such as arrival without proper transportation and communication before arrival, disease severity and non-availability of equipment. Another important factor here is that most of the neonates we received in our ED were those who were delivered outside the hospital as our hospital is specific for children and their referral documentation showed that initial resuscitative measures, like initial breathing support and temperature control, were not taken at the time of delivery.

Unfortunately, those cases which came with presenting complaints of diarrhoea and vomiting and were dehydrated at the time of arrival also faced in-hospital cardiac arrest that is not suspected as per the condition or presenting complaints in these cases. It is reported that unseen risk factors can lead to a proarrhytmic state in which physiological reactions to care can result in a refractory arrhythmia.6

Another significant finding in the study was the comparison of outcomes in patients who were transported to the ED with or without ambulance. ROSC rate was better in those who arrived in an ambulance — 80% vs 57% in those without an ambulance; similarly the difference in survival till emergency department management was 76% vs 50% in those who landed with and without an ambulance respectively. Bystander CPR has reported remarkable improvement in the survival of out-of-hospital cardiac arrest.7-10

Based on our findings, the physicians and administration have some recommendations for improvement in the outcome of those who are received as critically ill. First, communication should be strengthened between EMS (Emergency Medical Services) and the network of hospitals from where these patients are being referred for proper arrangement of facility. Second, all healthcare providers in the ED should be trained in basic and advanced life support, including Neonatal Resuscitation on a large scale specially in settings where babies are being delivered so that initial resuscitative measures can be provided with better outcomes at the site of referral. Third, implementation of bedside PEWS (Paediatric Early Warning Score) will definitely impact as an indicator for pre-arrest changes in clinical condition and it will save the golden minutes of resuscitation. Lastly, the network of ambulances should be strengthened along with access and awareness among public to utilise the services in case of emergency transportation for their critically ill children.

The current study findings show that almost 5% of patients during their emergency management faced IHCA and ROSC was achieved in 61% of the cases. Better outcomes were seen in those above neonatal age group and in those transported through ambulance.

Levels of physical activity and its association with antigravity muscles