Objective: To evaluate the frequency of parasitic infections and to assess the relation between intestinal helminth infection and the anaemia status of pre-school children.

Method: The community-based cross-sectional study was conducted in Skardu, Pakistan, from August 2016 to January 2017, and comprised pre-school children of either gender. Demographical data was collected using a structured questionnaire. Stool samples were collected and examined for the presence and differentiation of ova / larvae of different intestinal helminths under microscope at the pathology department of a local healthcare facility. Blood haemoglobin was measured from blood samples and anaemia was defined as blood Hb <11g/dL. Data was analysed using SPSS 22.

Conclusion: Prevalence of helminthic infections in pre-school children in Skardu was found to be high. The public health problem needs to be addressed for the healthy development of children.

Across the globe anaemia is one major public health issue. The World Health Organisation (WHO) states that some 2 billion people suffer from it.1 Its peak prevalence, however is in the developing countries which may be due to nutritional deficiencies or due to infectious diseases.2 Among the nutritional deficiencies, the deficiency of iron is said to be the most common.3 It is mainly due to parasitic infections which badly affect children compared to other age groups.4 The reason for children having this high susceptibility is said to be their diminished immune response along with poor sanitary and environmental conditions. All this ultimately leads to infecting children who then suffer from decreased physical and mental performance and many immune problems.2

Many hook-worms are known to cause anaemia and thus induce iron deficit.5 These hook-worms include ascaris lumbricoides, cryptosporidium, hymenolepis nana and giardia. However, this has not always been the case as no significant association could be found between parasitic infections and anaemia in a 2010 study.6 The current study was planned to determine the prevalence of parasitic infections in pre-school children, and to assess the association between intestinal helminthiasis and anaemia status.

The community-based cross-sectional study was conducted from August 2016 to January 2017 in the remote areas of Skardu, Baltistian in Pakistan. After approval from the ethics review committee of a secondary-care hospital in Skardu, the sample size was calculated using online Raosoft calculator7 at 95% confidence level. The sample was raised using non-probability convenience sampling technique from among pre-school children of either gender. All the children of pre-school age group who could be approached were included. Team visited the localities to approach families with pre-school children in the household, and children coming to hospital and fulfilling the inclusion criteria were also approached. All those with diagnosed health issues or congenital anomalies and those whose parents were not willing to participate were excluded. Although there is no standard definition of pre-school age group, in the cultural setup of Baltistan, children are usually not sent to school before 5 years of age. Therefore, the upper cut-off point of children’s age was set at 5 years.

After taking informed consent from the parents of the enrolled children, demographic data, including socio-economic strata (SES) was obtained using a structured questionnaire which was filled by the parents. Data regarding dietary patterns were not recorded as it was beyond the purview of the study. Anthropometric data of height, weight and body mass index (BMI) was calculated and the findings were plotted on growth charts to categorise the subjects using WHO classification:8 Underweight = weight-for-age <-2 standard deviation (SD) of the growth standards median; Stunted = height-for-age <-2SD of growth standards median; and Wasted - BMI-for-age <-2SD of growth standards median.

Specimen containers along with all the relevant instructions were given to children and their parents, and stool samples were collected the next morning. The samples were examined for the presence and differentiation of ova / larvae of different intestinal parasites under microscope. Blood samples were collected and transported to the laboratory the same day. For this purpose, manpower and equipment of the pathology department of the healthcare facility in Skardu were used. Children having low haemoglobin (Hb) level from lower cut-off values for their respective age groups were marked as anaemic. The levels above the lower cut-off value was categorised as Normal.  The cut-off values were: from birth to 48 months 11g/dL; and from 49 to 60 months 11.5g/dL.8

Data was analysed using SPSS 22, and was expressed as frequencies and percentages before using  Fisher exact test to assess correlation between anaemia and parasitic infection. P<0.05 was considered significant. 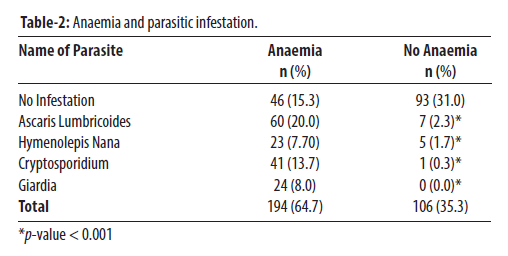 The current study observed that 53.67% of the sample had parasitic infections, with male children (31%) presenting more with worm infestation compared to female (22.6%) children. As in any other developing country, possible causes of infestation in children include playing in contaminated soil, poor sanitary and hygiene conditions, and inadequate hand-washing. Intestinal parasitic infestation is indicator of deep-rooted poverty, inadequacy of clean water, sanitary facilities and healthcare requirements.18 Furthermore, it was observed that amid different age groups, boys aged >2 years had the most infections. This means that when a child starts eating by himself, the chances of acquiring these infections are multiplied.

Many illnesses of children, including anaemia, and repeated gastrointestinal and respiratory tract infections, are the direct results of worm infestations. Among these, anaemia is one important presentation of these parasitic infections.19 It is responsible for high morbidity and mortality among infants and children. The magnitude of this problem is huge in the developing countries and it becomes more serious when seen in the context of children.20 In a country like Pakistan, it is no less than a worrying public health problem. These parasitic infestations contribute significantly to the overall anaemia burden within the Third World. And this occurs when the Hb concentrations become less than the predicted values in the blood for a specific age and gender. This low Hb level is the most appropriate indicator of biochemical screening tests to determine iron deficiency anaemia. The determination of Hb or haematocrit (Hct) as a public health measure has remained an important tool for monitoring the prevalence of anaemia and assessing the effectiveness of interventions.21

The current study also found a correlation of anaemia with different types of parasitic infestations. The study found that 15.3% pre-school children with no parasite infestation were also anaemic, indicating the other possible causes of anaemia; the most common being dietary deficiencies of micronutrients, like iron, vitamin B12 and folic acid.22 The other causes may include chronic infections, particularly malaria, malabsorption syndromes, hereditary haemoglobinopathies, to name a few. We found 22.33% ascaris prevalence, which is in line with many studies.23,24 It occurs more commonly in a setting of unhygienic living conditions. The infestations caused by ascarias do affect the nutritional status,25 but its bearings on anaemia were less clear. A significant association between ascariasis and anaemia was observed in a study where height, weight and Hb concentrations were used as indices to assess the nutritional status of parasite-infected children and children treated for parasites.26 There was a remarkable improvement in Hb status in children treated with iron supplements.27

It is worth highlighting that anaemia induced by parasitic infection in less developed world hamper physical and cognitive development. This happens as there is an impairment with the absorption of vitamins, or due to loss of appetite.

In the current study, children found infested with intestinal helminths were provided with anti-helminthic drugs in the prescribed doses. Health education regarding hygiene and diet was also extended to the mothers.

In the light of the findings, it is highly recommended that parents should pay due attention to sanitation and personal hygiene of their children to prevent the spread and development of intestinal parasitic infections. Further large-scale studies are needed to estimate the magnitude of this public health problem. More factors may be explored to find out the possible associations of anaemia in children. Public health interventions, including health education, food fortification, anti-helminthic treatment, provision of safe drinking water and sanitation are few of the steps to decrease the prevalence of intestinal parasitic infections and anaemia.

Prevalence of helminthic infections in pre-school children in Skardu was found to be high. The public health problem needs to be addressed for the healthy development of children.