Bleomycin, an antitumour antibiotic, is an essential part of treatment for multiple curable cancers, most commonly Hodgkin Lymphoma (HL) and germ cell tumours. Major limitation of its use is lung toxicity. Early diagnosis and treatment of bleomycin lung toxicity (BLT) is crucial, as the changes are reversible during early inflammatory phase only. 18F Flourodeoxyglucose (FDG) PET-CT can predict BLT early in the course of illness. It is important to pay attention to lung parenchymal uptake on interim and end of treatment scans, as this may predict lung toxicity even in the absence of morphological lung abnormalities and clinical symptoms. 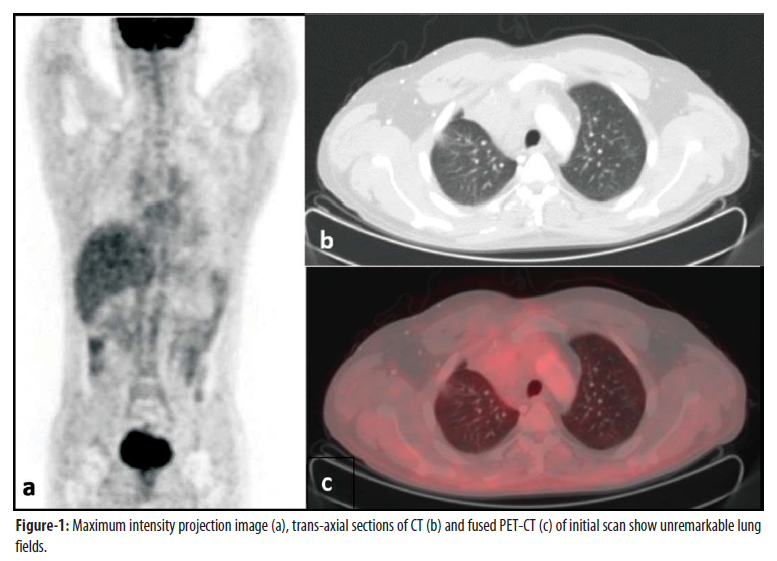 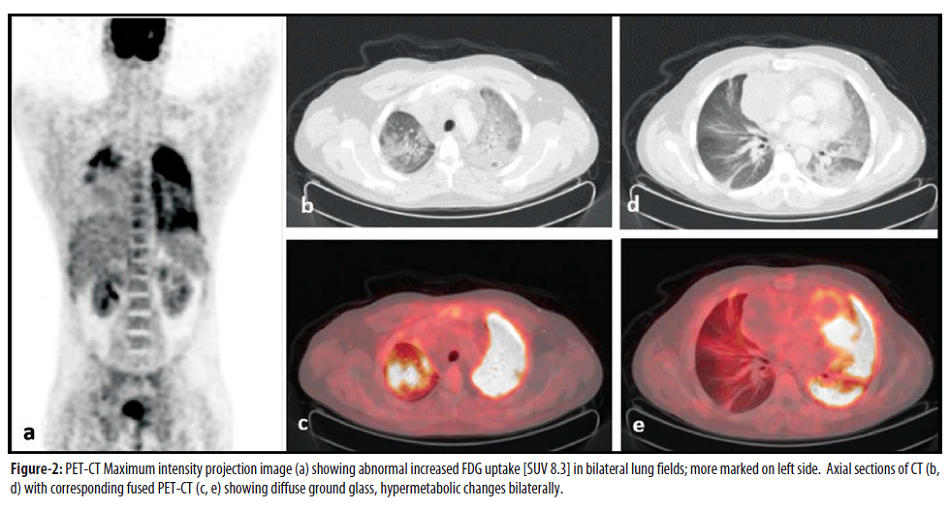 Patient was symptomatic at that time requiring supplemental oxygen. After excluding other causes, diagnosis of BLT was made. Bleomycin was omitted from chemotherapy regimen and managed with steroids with complete resolution of symptoms. Bleomycin induced lung injury may manifest as multiple distinct syndromes; Interstitial Pneumonitis being the most common variant with an incidence of 10% and mortality rates up to 10-20%. Diagnosis is challenging and based upon clinical symptoms, radiological patterns, histology and pulmonary function tests; provided other disorders have been excluded. Radiological findings can be misleading, as chest X-ray may appear normal in early phase. CT findings may vary from non-specific airspace consolidation to groundglass opacities.1 Diffuse FDG uptake can be seen in lung parenchymal changes secondary to BLT, predominantly in basal and subpleural areas prior to clinical presentation.2,3 Falay O. et al. showed abnormal lung uptake of FDG in 13 out of 77 patients treated for HL, suggesting Bleomycin induced pneumonitis on interim scan. All were successfully treated with steroids and omitting Bleomycin.4 BLT is thought to resolve in majority of patients if diagnosed timely. Delayed diagnosis may lead to lung fibrosis which leads to acute respiratory compromise, an irreversible condition. FDG-PET/CT plays an important role in the early detection of BLT before clinical and radiological finding, instigating the clinicians to treat timely.