A 10-year-old boy presented at the Paediatric Emergency service of National Institute of Child Health in November 2019 with a painful and irreducible right inguinal swelling. Exploration revealed a reddish-blue tissue mass protruding through the deep ring extending into the base of the scortum. Further dissection showed the swelling to be in continuity with multifocal retroperitoneal vascular malformations scattered along the posterior and lateral abdominal wall. This swelling was excised and histopathology result confirmed the diagnosis of venous variety of vascular malformation. This is an unusual case of a retroperitoneal venous malformation in a child, clinically mimicking a strangulated inguinal hernia.

Vascular malformations are rare diseases resulting from errors of vascular morphogenesis, affecting any segment of the vascular tree including arterial, venous, capillary, and lymphatic vessels or in combination.1 Retroperitoneal vascular malformations of venous origin are extremely rare in the Paediatric population and their presentation as inguinal hernia is an exceptional case.2 Here, we report a case of inguinal extension of retroperitoneal venous malformation, with short-term follow-up, highlighting various aspects of its clinical presentation and management issues encountered.

An 11-year-old boy presented at the Paediatric Emergency service of National Institute of Child Health in November 2019 with complaints of painful swelling in the right inguinal region for the last four hours and two episodes of non-bilious vomiting. The parents gave the history of reducible swelling since four months. He had been diagnosed as a case of inguinal hernia and was waiting for an elective surgery in another hospital. Due to pain and irreducible swelling, the patient was referred to the emergency service of our hospital for surgical intervention. On examination, the patient was tachycardic. The abdomen was not distended and soft on palpation. There was a tense, tender, irreducible swelling in the right inguinoscrotal region and the overlying skin was warm and erythematous. Urgent inguinoscrotal exploration was done with a provisional diagnosis of right-sided strangulated inguinal hernia. Per-operatively a long tubular reddish-blue and oedematous structure was identified extending from the scrotum, along the length of the inguinal canal entering into the abdomen near the deep ring (Figure- 1). 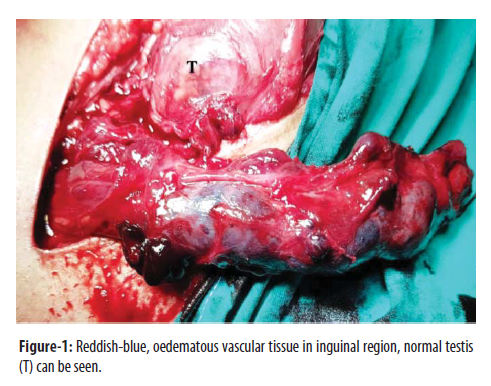 No hernia sac was present. The right testis was identified to be normal. Since the extent of the upper limit of this structure was unclear for resection, abdominal exploration was done through midline laparotomy incision. The vascular structure was found to be extra peritoneal and was extending along lateral pelvic wall into the retroperitoneum. There were widely scattered vascular malformations along the lateral and posterior abdominal wall bilaterally (Figure-2). 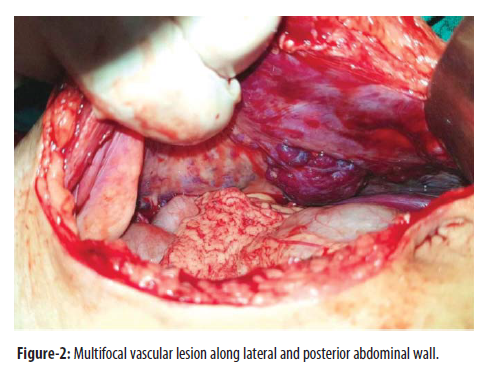 The liver, spleen, kidneys, and bowel were normal. This vascular tissue was delivered intra-abdominally and ligated at its point of origin along the lateral pelvic wall. The patient had smooth post-operative recovery and was discharged on the 5th post-operative day. CT scan of the chest and abdomen, done on out-patient basis, showed multifocal vascular tissues in the retroperitoneal spaces and involving paravertebral areas bilaterally. There was no intra-spinal extension, and the liver and spleen as well as the hollow-viscera were normal. Heart and vasculature of the chest and abdomen including aorta, vena cava, mesenteric and iliac vessels were labelled as normal. Echocardiogram revealed no cardiac abnormality. Histopathology results revealed the mass to be of venous origin.

Venous Malformations are thought to arise sporadically and account for about 94% of vascular malformations.3 They tend to involve the skin and muscle in the region of head, neck, and the extremities.4 The venous malformations may infiltrate the surrounding tissues of the body, including the skin, mucous membrane, bones, joints, and even viscera; hence, the clinical symptoms vary with size and site of anatomical location.5 The retroperitoneal space is vast and away from critical organs, therefore, symptoms of vascular malformation arising in this region are usually vague and nonspecific until it attains a large size, compressing or invading adjacent structures.6 Similarly, in the current case, the only indicator of an underlying pre-existing vascular malformation was a swelling in the inguinal region which was labelled as inguinal hernia. The diagnosis of retroperitoneal tumours is difficult because they are located deep within the trunk. Ultrasound Colour Doppler, CT and MRI, and phlebography are usually used for the diagnosis and delineation of anatomy and planning of treatment.7 The treatment of a patient with venous malformations is individualised, based upon the location, extent, and most importantly, the symptoms of the patient.8 The majority of retroperitoneal venous malformation are asymptomatic, only requiring watchful waiting.9 In symptomatic cases surgical resection has been proposed as the treatment of choice but the complexity of retroperitoneal anatomy, diffuse nature of the disease, and involvement of vital structures makes resection technically challenging. In such situations, debulking surgery can be useful to relieve the symptoms. Direct injection of a sclerosing agent such as ethanol and in a few cases use of laser or embolisation has also shown promising results.10,11 Retroperitoneal venous malformations have been reported to be firmly attached to the spleen, peritoneum, kidney, ureters, duodenum, and nearby vessels of pancreas. Therefore, surgeons should pay attention to intraoperative bleeding and bleeding associated with removal of the lesion and risk of injury to the surrounding structures.12 In our case, the patient was asymptomatic except for inguinal swelling, and per-operatively no invasion of the surrounding structures was identified. The patient was followed-up for two years and remained well during this period.

Consent: Written consent was taken from the patients father for publishing the case report.