In this part of the world, Burkitt's lymphoma (BL) of mandible considers a unique entity, while BL involving the jaw is endemic in Africa. BL being one of the most speedily growing malignancy, can cause immense destruction in the maxillofacial region. This case report highlights a 3-year-old child affected with BL of mandible. The presenting complaint of the patient was a rapidly enlarging swelling on the right side of the face, causing disfigurement and interfering with the normal oral functions. Confirmatory diagnosis of BL was established after correlating the clinical, radiographic, and biopsy features. Later on a tumour board discussion was held for this case, and the child underwent chemotherapy. Unfortunately, he could not survive after the second cycle of chemotherapy. This emphasises that for every fast growing jaw lesion, BL should have a significant position in the list of differential diagnosis, even in this part of the world without considering the age of the patient.

Burkitt's lymphoma (BL) is considered a malignancy of lymphoreticular system, originating from B-lymphocyte. It is an aggressive form of non-Hodgkin's lymphoma (NHL), consisting of high-grade, diffused, small, and non-cleaved B-lymphocytes.1,2 World Health Organisation categorises BL in three different forms: endemic, sporadic, or immunodeficiencyassociated. The endemic category exclusively affects children and approximately two-third of cases occur in jaws. This type affects posterior areas of jaws more than the anterior and the maxilla more frequently than the mandible.1-3 However, only 7-18% jaws are affected in the sporadic category of BL,2,4 while abdominal complications are a prominent feature in this type. Younger children are relatively more affected in endemic than sporadic BL. In non-endemic regions, the adults are predominantly affected. Moreover, patients with various immunodeficiency diseases, such as HIV infection are more prone to BL.1,2 Clinically, BL presents on multiple extranodal sites with rapidly progressing features. Similar is the case in oral cavities; the tumour rapidly grows from the jaws, and within days, becomes a prominent facial swelling.1,4 In literature, we found rare cases of similar presentation. This case report emphasises the fact that only the clinicians' high index of suspicion for any insidious jaw lesion, even in children, can ensure well-timed diagnosis and referral of BL.

A 3-year-old boy was presented in the department of Oral & Maxillofacial Surgery, Mayo Hospital, Lahore on Dec 3, 2019, with the chief complaint of right lower facial swelling for the last 20 days. According to his mother, swelling started inside the oral cavity from the right side of the lower jaw, progressed swiftly, and became prominent on the face within days. General physical examination revealed good health of the patient, with no history of allergy to any medicine and food. The extraoral examination showed a firm swelling on the right side of the face extending from the cheek bone up to the lower border of the mandible. Swelling was not well-demarcated (Figure-1). 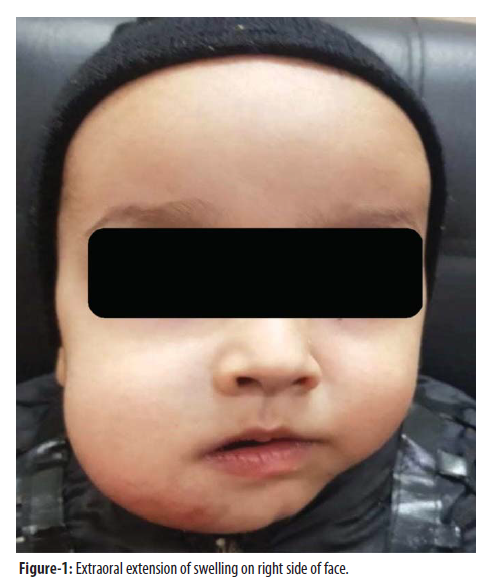 Overlying skin was smooth and normal, in colour and temperature. Although the swelling was not associated with pain, its big size affected the normal oral functions. The intraoral mass appeared on the right lower posterior mandible. Approximately 9x8 cm sized mass was erythematous and had lobulated, irregular surface. Moreover, the right mandibular deciduous molars showed marked mobility and displacement to the lingual side (Figure-2). 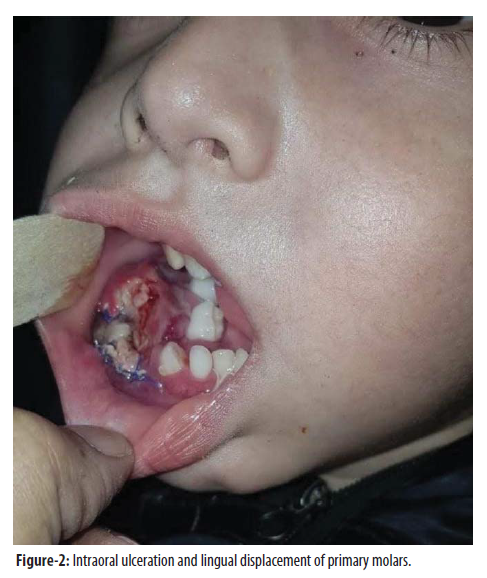 The radiographic features on the Orthopantomogram included destructive changes of the left ramus, angle, and the body of mandible. The right lower primary first and second molars disclosed loss of the lamina dura. Right mandibular area exhibited a mixed radiolucent radioopaque osteolytic lesion causing destruction of cortical bone. However, the lower border of the mandible was intact (Figure-3). 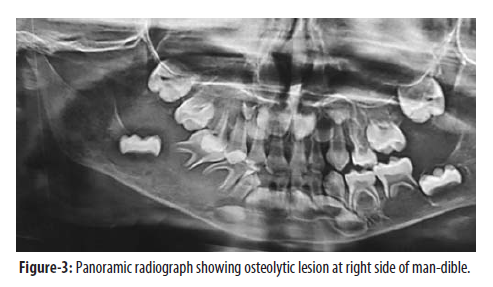 All these features were suggestive of a malignant disease. Thus, an incisional biopsy was performed from the right mandibular vestibule (0.5× 0.4 × 0.3 cm). Histopathological sections revealed malignant neoplasm arranged in sheets of fairly monotonous population of atypical lymphoid cells. Size of these cells were variable, having pleomorphic nuclei with prominent nucleoli, and scant cytoplasm. Some of the cells had indented nuclei with 2-3 non membrane bound nucleoli. Mitotic activity was brisk. These features were consistent with the diagnosis of Burkitt´s lymphoma. Patient was referred to the oncology department for further evaluation and intensive chemotherapy. After the first cycle of chemotherapy, swelling markedly regressed in size. But the death of the patient occurred after the second cycle of chemotherapy, due to chemotherapy related complications.

Dennis Burkitt, in 1958, first coined the term Burkitt Lymphoma (BL), a highly aggressive mature B-cell non-Hodgkin lymphoma. BL, has been classified by the World Health Organization (WHO) with the classification of lymphoid neoplasms as endemic, sporadic, and immunodeficiency-associated variants.4-6 In equatorial Africa, children between four to seven years of age are predominantly affected with the endemic type.2,4 The endemic and sporadic types have been categorised exclusively on the basis of specific geographic or climatic distribution of the disease. The term endemic was labelled as such due to its 50 times higher incidence in equatorial Africa than in the United States.5,7 The sporadic type accounts for 1%-2% of all adult lymphomas in the United States and Western Europe, 5 but in Pakistan, about 12% of adult population is affected by sporadic type.7,8 Sporadic cases of Burkitt's lymphoma usually involve the abdominal region, while endemic cases predominantly arise in the jaw.7,8 Although Pakistan is non-endemic for this disease, it appears that Burkitt's lymphoma is relatively common among children in Pakistan as compared to other nonendemic countries. The ratio observed is 5% of all malignancies among children in our population as compared to <1% in North America and 2% in South America. However, the clinical presentation specific to the African type, i.e., jaw swelling, was rare i.e.,4%.8 Current literature from Nigeria revealed Burkitt's lymphoma as the predominant orofacial tumour in the paediatric population. They also noted an overall increasing incidence of paediatric orofacial tumours (24% to 28%) in their population.9 This finding is also similar to a study conducted in Pakistan, which showed Burkitt's lymphoma (33%) as the most prevalent histological subtype of Non-Hodgkin's Lymphoma in childhood.7 Our case report is about Burkitt's Lymphoma in a 3 year male child involving the mandible falls in the category of the endemic type of BL,2,4 a quite rare entity in this region. However, no specific case clustering is found in our cases. Burkitt's Lymphoma shows male predominance (M:F 2.3:1) in Pakistan8 as compared to other parts of world.9 Our case showed rapid progression of the lesion, similar to other reported cases.1,2 In literature, it is evident that in BL, the rate of mitosis of malignant cells is so rapid, that within 24 hours, the tumour can double in size. This is the reason to consider BL as the fastest growing malignancy in humans.1,6 In the oral cavity BL can present as toothache, expansile lesion of the jaw, severely displaced and mobile teeth, or as ulcerative or fungating mass.1,4,6 Our reported case showed all these clinical features except pain. Histological features of this case are also consistent with the literature.1,6 It has been reported that the five year survival rate of patients with BL has improved up to 85% with aggressive chemotherapy as treatment modality. But this treatment modality can have toxic effects that are not well tolerated by some patients.5 Particularly, children less than 5-6 years of age are more prone to these lethal effects.1 As in our patient chemotherapy was not well tolerated. Perhaps, It may be the lack of additionally required close monitoring and support in developing countries, which is essential to better tolerate the full-dose of chemotherapy.5 Moreover, it is also difficult to comment on the prognosis of Burkitt's lymphoma in this part of the world, as the number of cases followed are small.8

The endemic type of Burkitt's lymphoma involving the jaw is a fast growing and destructive disease. It should be included in differential diagnosis of insidious jaw lesions, even in non-endemic regions of the world.

Consent Form: Consent for publication was provided by the parents of the patient.