Currently, Salter-Harris (SH) classification is generally used in physeal fractures, as it is reliable and valuable in many cases. Although this clasification system describes many different fracture configurations, still there is an unclassifed group of fractures. Here, we present the case of an 11-year-old boy who underwent surgery after fracture of distal radial epiphysis,of the type still unclassified according to SH classification. The main reason for ourresearch was that the line of treatment could not be decided initially after the first operation. The current classsifications that are close to SH and essentials on the neccesity of surgical approach were dicussed. Surgery must be attempted in cases in which it cannot be decided whether it is a SH type 2 or 3. Besides this situation, an attempt must be made for the classification of the fracture (Ogden tip 2b, Sferoupulos tip 3). Another important point is to decide where the fracture line goes in the layers of physis.

The growth plate fractures of the distal radius are generally evaluated according to the classification system introducedby Salter and Harris (SH). This classification system is designed to determine where the fracture line passes through the physeal layers and how this situation is reflected in clinical practice. Although the SHclassification gives a good idea about prognosis in general, it is inadequate in some growth cartilage fractures of the distal radius. Therefore, different classifications other than SH have been made. Although classifications guide in terms of radiologic treatment management, they do not provide histopathological insight. The surgical indications of the 11-year-old male patient were discussed, which could not be classified according to SH after reviewing the available findings about the surgical treatment and evaluating the parts related to the present case. It is believed that the surgical indications should be expanded after careful examination in such fractures. This case provided a chance to consider whether surgical treatment should be performed in minimally dissociated fractures that longitudinally traversed only the metaphyseal portion of the distal radius and reached physis.

At July 2018, an 11-year-old male patient presented to the emergency department of Kutahya Health Science University Evliya Çelebi Research and Training Hospital, Kutahya, Turkey. Complaining of a simple fall on the left wrist. The physical examination revealed swelling, crepitation, deformity in the wrist, and no neurovascular deficits. The X-ray examination showed a distal radius epiphyseal fracture on the anterior-posterior side of the left wrist (Figure-1). 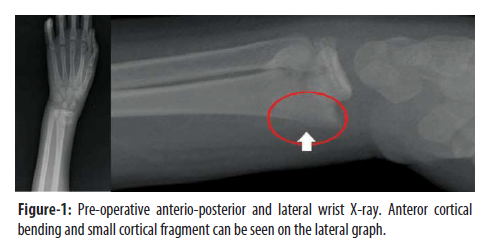 First, closed reduction and long-arm splint were applied to the patient. Surgical treatment was planned because of a loss of reduction during the followup. Under general anaesthesia, the fracture was reduced closely and fixed with three Kirschner wires. Reduction was found to be appropriate with scopy control. The longarm splint was applied. An evaluation of the postoperative control with direct X-ray examination showed a separate fragment in the distal metaphyseal region extending to the physis besides the SH type 2 fracture (Figure-2). 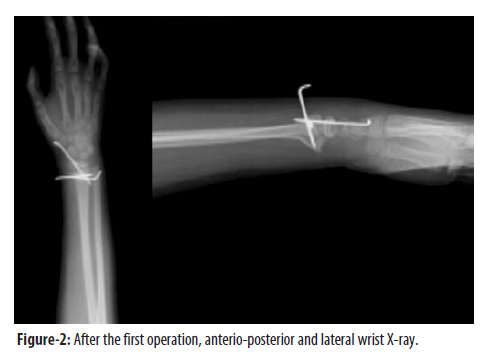 A three-dimensional (3D) computed tomography (CT) was requested to monitor the fracture configuration in detail. CT images showed that the fragment extending from the metaphyseal to the physeal region had volar dislocation, and the distal part was almost completely separated from the physis. Whether this fragment occured secondary to a pre-existing fracture line or iatrogenic, could not be evaluated precisely because a pre-operative CT of the wrist was not available. However, a bend in the anterior cortex and a small fragment in this area on pre-operative lateral radiography showed that there might be a nondisplaced fracture here. After the first operation, the displacement in this region became apparent,which led to the opinion that this happened iatrogenically. The available findings were reviewed for a second surgical intervention, and the criteria related to the nature of fracture and the prognosis were interpreted (Figure-3). 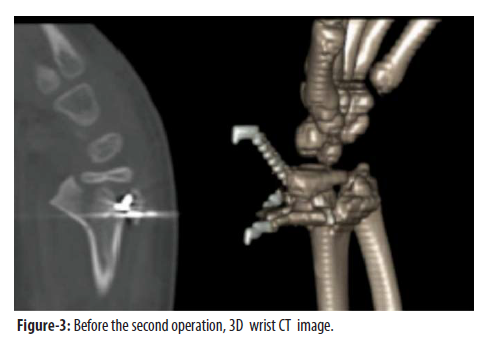 As a result, a second surgical intervention was decided and the fracture was reduced openly and fixed with four Kirschner wires. Reduction was approved with scopy control. The extremity was fixed with forearm cast, and the operation was completed (Figure-4). 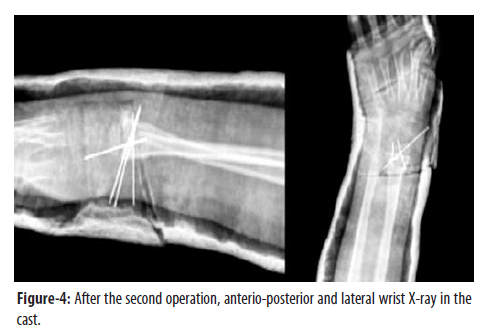 No loss of reduction or complications were reported in the follow-ups. The parents consent was taken from family by us.

Conflict of Interest: The person who signed the Ethical Review Approval is the co-author of this article.