Hip replacement for femur neck fracture in the elderly, effects of delayed surgical intervention on morbidity and mortality, a retrospective comparative study

Hip fracture is one of the most common injuries in the elderly population. Delay in operating on patients with hip fracture is associated with greater mortality and morbidity. A retrospective review of medical charts of patients who underwent primary total hip replacement (THR) for neck of femur fractures at our tertiary care level 1 trauma was carried out. Data was collected from the patients' charts and analysed for 30-day mortality and morbidity. A total of 96 patients were included in the study. Out of the 36 patients in the delayed THR group, mortality within 30 days was observed in 4 (11.1%) patients while none was noted in the early THR group. The difference was statistically significant with a P-value of 0.008. With regards to post-operative complications, significantly higher percentage of patients were noted to have developed electrolyte imbalances (P = 0.003), postoperative psychosis (P = 0.02), and acute kidney injury (AKI) (P = 0.02) in the delayed THR group compared to the early THR group. Delay in surgery for neck of femur fracture is associated with increased 30-day mortality and postoperative complications.

Hip fracture is one of the most common injury in the elderly population with increasing incidence in the world being estimated at 4.5 million by 2050.1 The elderly already have multiple medical conditions which increases the risk of morbidity and mortality. Mortality risk increases during the first year of life which may persist for several years. About 23.8 % of the patients die within the first year after hip fracture.2 There is a wealth of research on the effect of interval between injury and surgery on morbidity and mortality of patients with neck of femur fracture. The majority of these studies suggest that delay in operating on patients (time between first insult and surgical treatment) with hip fracture is associated with greater mortality and morbidity.3-8 It is accepted that delay in surgery increases mortality in patients with neck of femur fracture but there is no consensus on optimum time which is safe for patient care.9,10 In the UK surgery is advised within 36 hours and in the USA it is recommended within 48 hours.11,12 The delay in surgical intervention is primarily because of multiple medical conditions and the fear of anaesthetic and operative complications. Cardiac, pulmonary, and anaesthetic risk assessment needs multiple investigations which results in delay in surgery, depending upon the availability of resources in different hospital settings. The aim of this study was to assess the morbidity and mortality of this group of patients in our population and compare the time management, morbidity and mortality in our patients with standard guidelines.

This was a retrospective review of medical charts of patients conducted in September 2018 for patients who underwent hip surgery for neck of femur fractures at our tertiary care level 1 trauma centre. It included all patients who presented at the emergency department with neck of femur fracture from January 2013 to December 2016 and were operated for primary total hip replacement. Standard deep venous thrombosis prophylaxis and postoperative antibiotic were given to all patients. All patients who were above the age of 60, regardless of race, gender, and co-morbidities and had undergone hip surgery for neck of femur closed fractures were included in the study. The patients who had been operated for neck of femur fracture outside the AKUH, were below 60 years of age, had open or pathological fracture, and patients with missing data were excluded. The study population was divided into two groups: early primary total hip replacement group and delayed primary total hip replacement group. Early surgeries were performed within 48 hours and delayed surgeries were performed after 48 hours after fractures. Demographic variables including age, gender, and comorbidities were collected from the patients' charts. American Society of Anaesthesiologists' (ASA)13 status was recorded from operating room record. Outcome variables including 30-day mortality and post-operative complications such as surgical site infection, psychosis, urinary tract infection, myocardial infarction, postoperative ileus, electrolyte imbalance, and implant failure (dislocation) were collected from patients' records and clinical follow-up notes. Surgical site infection was recorded according to the Centre for Disease Control and Prevention (CDC) criteria for nosocomial surgical site infection. Post-operative X-rays of the pelvis anteroposterior (AP) and hip lateral shoot through were assessed to see implant orientation. Data was analysed in statistical package for social sciences (SPSS) version 21. Continued variables were analysed as mean ± standard deviation. Descriptive analysis was done to calculate variables such as age, gender, comorbid conditions, and American Society of Anaesthesiologists (ASA) grade. Pearson chi-square test was applied to evaluate relationship between morbidity and mortality in both early and delayed groups of study patients in order to assess the delayed outcomes in surgical management. The significance level was set at P-value of <0.05.

A total of 96 patients were included in the study; 60 patients in the early THR group and 36 patients in the delayed THR group. Baseline characteristics were found to be similar in both the groups as shown in Tables-1 and 2. 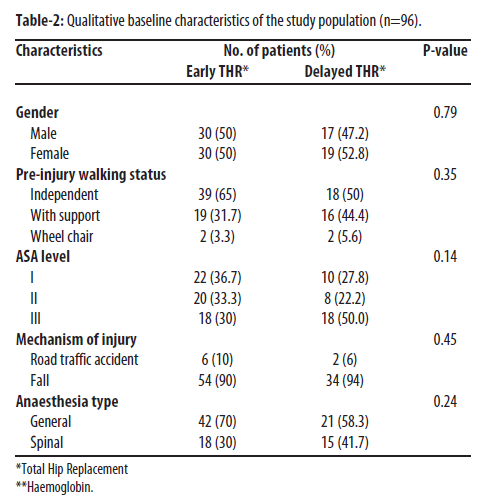 There were 30(50%) males and equal number of females in early THR group while in delayed group 17(47.2%) were males and 19(52.8%) females. In terms of co-morbidity status; Charlson co-morbidity index in early THR group was found to be 1.55 ± 0.83 while in delayed THR group it was 1.64 ± 0.68 (P-value = 0.59). The mechanism of injury was found to be either fall or road traffic accident (RTA), with majority of patients presenting with fall, 54(90%) patients in early THR group, while 34(94%) patients in late THR group. The reason of injury was either fall or road traffic accident (RTA), with 89 (92%) of the patients presenting after a fall. With regards to post-operative complications, significantly higher percentage of patients had developed electrolyte imbalance (P = 0.003), post-operative psychosis (P = 0.02) and acute kidney injury (AKI) (P = 0.02) in the delayed THR group as compared to the early THR group in which none of the above mentioned complications were noted (Table- 3). 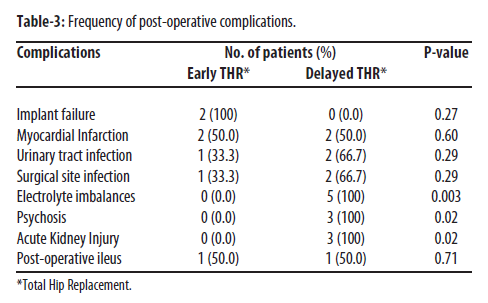 Our present study concludes that delay in surgery for neck of femur fracture is associated with increased 30-day mortality and postoperative complications. Although some of the complications were manageable but if there had been a proper trauma management system, we could overcome the delay in surgery and the morbidities resulting due to that delay, could have been avoided.

We recommend a dedicated trauma system incorporating coordinated fast track system of various specialties in order to optimize these patients as soon as possible and proceed with the surgical intervention which eventually reduces morbidity and mortality. Being a developing country, we also recommend public awareness about urgent need of operative intervention in these patients. This should be publicized by higher authorities so that optimum care can be provided to patients with reduced complications.