Psychological disturbance (PD) or cerebral dysfunction (CD) covers several clinical areas, and has defining features of mental retardation. Recently, we conducted a study to investigate heritable heterogeneity in Pakistani consanguineous couples with recessive autosomal intellectual abnormalities. A cohort of three consanguineous families with multiple birth defects, belonging two to district lower Dir and one to district Lodhra, were selected for molecular analysis. All the affected individuals in the cohort showed autosomal recessive non-syndromic mental disturbances. DNA was extracted and subjected to Single tagged sequence (STS) marker analyses to all known non-syndromic autosomal recessive mental retardation (NS-ARMR) genes, while autozygosity mapping was performed by advanced SNP techniques. Fragment analyses of the NS-ARMR disease genes CRBN, CC2D2A, PRSS12, GRIK2, TUSC3, and CC2D1A using polymorphic STS markers confirmed these to be contender genes for the alteration. Mapping of autozygosity in all the study subjects using genome study revealed nine novel linkage intervals, i.e. four intervals for MR4, two intervals for MR8 and three intervals for MR13. In spite of being a monogenic condition, autosomal recessive mental retardation shows genetic heterogeneity and several genes are involved in different families; hence, there is a chance for involvement of separate gene in each family.

Psychological disturbance (PD) or cerebral dysfunction (CD), which covers various medical areas, is often described as mental retardation and is identified by abnormal mental and psychological behaviour in early age, i.e. below 18 years of age.1-3 Various factors — both genetic — and environmental, are responsible for the initiation of mental retardation (MR) that disturbs the function and growth of the central nervous system (CNS) in the pre, pro and perinatal period.4 Mental retardation has been reported to be responsible for affecting about 1- 3% of the general population.5 Phenotypically, MR can be syndromic, when accompanied with additional malformation, dysmorphic characters, neuronal dysfunctions, and non-syndromic (NS) which is devoid of any extra features. Elevated occurrence in males as compared to females causes the involvement of a number of X-linked genes in NS-MR.6 The whole numeral of NS-MR associated alleles might go beyond a thousand which is not astonishing as approximately 25,000 individual genes are present in the brain.7 Furthermore, it is likely that the autosomal forms of NS-MR may be more frequent than X-linked NS-MR since the X-chromosome represents only 4% of all alleles. Seventeen non-syndromic recessive autosomal locus from DMRT1-17 have been identified with diseased genes recognised for seven locus among them (Table-1).8-11

Several other linkage regions and genes have been reported for AR-NSMR.12-15 This study aimed to investigate the medical causes and findings of mapping related to autozygosity in three Pakistani families with NSARMR, which had several affected individuals. Autozygosity mapping is ideal for detection of autosomal recessive characters in consanguineous families where all affected individuals must be homozygous, while normal individuals are heterozygous as shown in an earlier study reported from Pakistan.8

Out of the three families studied, one family MR4 (Figure-1 A), having extreme MR characteristics, belonged to Lodhra District in Punjab, while two large consanguineous families, MR8 and MR13 (Figure1-B & C), were from District Dir, Khyber Pakhtunkhwa province. All the three families were large, consisting of five/six generations with families having first cousin marriages resulting in an elevated level of consanguinity. All the study protocols were approved by the National Institute for Biotechnology and Genetic Engineering's (NIBGE) ethical committee. The families were examined at their place of residence for comprehensive medical assessment. Consent forms were signed by all selected family members. Blood samples were obtained from normal as well as MR patients following all protocols. Lineages were prepared using Cyrillic software on the information provided by the families concerned. Family members, both normal as well as abnormal, were screened through benchmark opinion poll, pictures, parents' interviews and medical histories were documented. Patients and their parents were examined by a psychologist for IQ assessment.

All affected individuals (Figure-1 A, B and C) were off springs of healthy first cousin parents from the fourth and fifth generations with normal pregnancies. 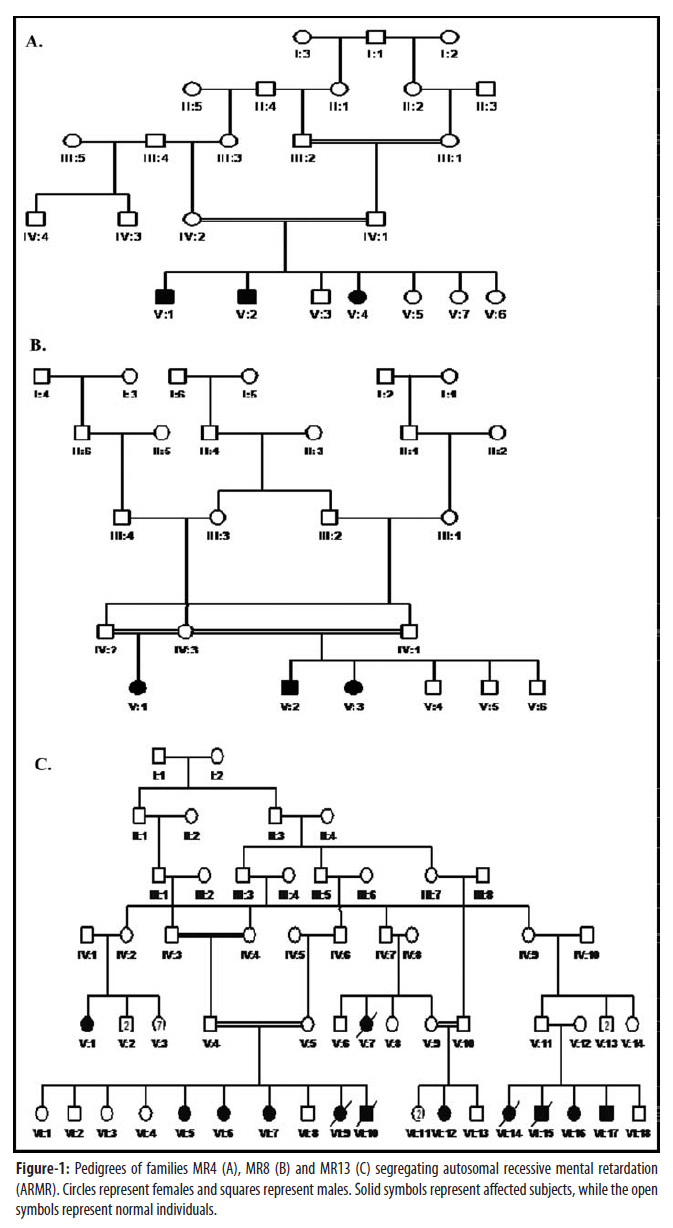 All affected individuals had delayed milestones, including neck holding at more than one year, sitting at more than 2.5 years, walking at more than four years, speech problems and no development of language. Clinically, at the age of around 10-20 years, they had normal height and head circumference and no dysmorphic features. Fragment analyses of the NS-ARMR disease genes — CRBN, CC2D2A, PRSS12, GRIK2, TUSC3, and CC2D1A — (Table-1) using polymorphic STS markers confirmed these to be contender genes for the alteration (Tables-2 and 3). 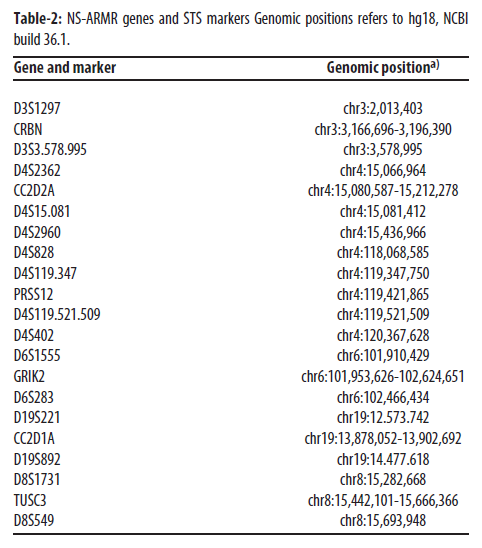 The SNP microarray analysis for copy number variations in the family were similar as in the previously reported studies and failed to identify large deletion or duplication in the genomes co-segregating with the NS-MR trait.16-18 Mapping of autozygosity in all the sampled individuals using genome study revealed nine novel linkage intervals, i.e. four intervals for MR4, two intervals for MR8 and three intervals for R13 (Table-4).

HOMER2 gene located in homozygous region on chromosome q25.2 was selected as a candidate gene for sequencing based on the predicted function of their product. The coding sequence, exon intron boundaries and 5/ and 3/ UTR sequences of the selected gene were analysed for mutation(s) in the two affected individuals. No sequence variants were identified when compared to the reference sequences (http://www.ncbi.nlm.nih.gov/, http://www.ensembl.org/), which shows agreement with the earlier studies on ARMR.19,20 Non-syndromic cerebral disturbance is an incredibly multifaceted ailment, whose aetiology is usually very difficult to unscramble and quite a few autosomal loci have been investigated in previous reports.21 As reported in literature, 17 loci have been identified specifically for ARNS-MR. The involved genes have been identified for only seven loci, and the number of identified mutations is very low.22,23 The nine novel linkage intervals reported the code for about 239 genes (UCSC Genome Browser hg 19; http://genom e.ucsc.edu). Metabotrophic glutamate receptor task has been controlled by HOMER2 gene (MIM 6047990) which may be involved in cell growth. HOMER2 gene is composed of 9 exons. It has also been reported that the candidate gene is involved in calcium signalling by means of record search, alteration, and resistant spot investigations.24 In addition two other homer family proteins — HOMER2 and HOMER3 — showed negative regulators of T-cell activation.3 Similarly, cocaine addiction is also regulated by HOMER1 and HOMER2.25 Upon analysis, no pathogenic mutation was found in HOMER2 gene which excludes its involvement in causing AR-NSMR in the family. AR-NSMR is genetically heterogenic in nature because there was no overlapping among nine linkage intervals identified for three consanguineous families. Although both the sampled families were from the same ethnic group and region, no overlapping was observed. This data indicates the genetic heterogeneity of AR-NSMR at least in Pakistani population. Future complete series investigations of the linkage intervals using DNA imprison, after cohort sequencing and whole exome sequencing technologies will expectantly make it probable to identify the pathogenic alteration that causes the NS-ARMR phenotype in these families.

Different linkage intervals for each family suggest that ARNSMR is genetically heterogenic in Pakistani population. There is a chance for involvement of separate disease causing gene in each family. These intervals can be further scrutinized for targeting of underlying genes using robust and advanced technologies.

Disclaimer: None to Declare.

Conflict of Interest: None to Declare.

Funding Sources: None to Declare.

Hip replacement for femur neck fracture in the elderly, effects of delayed surgical intervention on morbidity and mortality, a retrospective comparative study