Method: The systematic review was conducted at Aga Khan University, Karachi, in September 2018, and comprised electronic search of PubMed, Ovid, Science Direct and Cumulative Index of Nursing and Allied Health Literature databases of studies conducted from January 1990 to September 2018 which were categorised into 3 sets; 1990-98, 1999-2007 and 2008-18. Studies included for review focussed on articles with pulmonary exacerbation as the health outcome indicator, and had diagnosis of cystic fibrosis as the inclusion criteria, while risk factors were the exposure terms used in the search process. References in bibliographies of the included studies were also systematically searched for relevant documents.

Conclusion: Early identification and recognition of risk factors associated with pulmonary exacerbation can have an explicit impact on its management, leading to decreased morbidity and mortality burden in cystic fibrosis cases.

Cystic fibrosis (CF) is an inherited disorder affecting multiple organ systems. Autosomal recessive mutation of the cystic fibrosis transmembrane conductance regulator (CFTR) gene on chromosome 7 plays a pivotal role in pathogenesis. Major morbidity and mortality are attributed to pulmonary manifestations of CF. Infections comprise the major lung disease burden. Structural and functional decline in pulmonary parenchyma occurs with recurrent pulmonary exacerbations. In the United States, 1 out of every 3,200 Caucasian births have CF. Current medical advancements and research developments have increased median survival to the 4th decade. However, patients still experience shortened life expectancy secondary to devastating pulmonary manifestations and progressive lung function decline.1 Pulmonary exacerbation is as an escalation of the pulmonary decline with deterioration in forced expiratory volume in 1 second (FEV1), nutritional decline, regression in daily functioning and quality of life (QOL). Progressive lung descent is the central determinant of disease outcome in CF.2 Pulmonary exacerbation serves as a key indicator for disease severity and is a crucial variable in studies assessing overall survival (OS) related to CF. Moreover, lung disease remains the primary target for pivotal treatments decreasing morbidity and mortality in CF. Multiple risk factors associated with pulmonary manifestations contributing to exacerbations have been identified. These include nutritional deficiencies, infections, medications, biochemical markers indicating acute episodes and the effect of socioeconomic status (SES).3 Identification of risk factors has a vital role in treatment and can improve management outcomes in CF population which in turn can affect life-expectancy and rate of exacerbations. The current study was planned to systematically review literature to recognise risk factors correlated with pulmonary exacerbations in CF.

The systematic review was conducted at Aga Khan University, Karachi, and comprised electronic search of PubMed, Ovid, Science Direct and Cumulative Index of Nursing and Allied Health Literature (CINAHL) databases of studies conducted from January 1990 to September 2018 which were categorised into 3 sets; 1990-98, 1999- 2007 and 2008-18. The year 1990 was set as the starting point for literature search to maintain relevance. The initial database search was done in September 2018 followed by screening of articles. The review of relevant full text completed in the last quarter of 2018, and the manuscript was finalised in the first quarter of 2019. The search covered all reports in indexed and nonindexed local and international English-language journals which described primary epidemiological research concerning risk factors for pulmonary exacerbation in CF in Asian populations. Studies included for review focussed on articles with pulmonary exacerbation as the health outcome indicator, and had diagnosis of cystic fibrosis as the inclusion criteria, while risk factors were the exposure terms used in the search process. References in bibliographies of the included studies were also systematically searched for relevant documents. Full-text copies of all the studies found were scrutinised. Those that met the inclusion criteria were then abstracted and summarised using a standardised form. Following the initial electronic search carried out independently by all the authors, decisions and abstracted summaries were compared and disparities were settled through discussion. For the development of protocol, manuscript and reporting of study findings, Preferred Reporting Items for Systematic Reviews and Meta-Analyses (PRISMA) guidelines were used.4 Quality assessment of the studies was done using the Newcastle-Ottawa scale (NOS) for cross-sectional and cohort studies,5 interpreted as per the given criteria; Good quality: 3 or 4 stars in selection domain AND 1 or 2 stars in comparability domain AND 2 or 3 stars in outcome/exposure domain; Fair quality: 2 stars in selection domain AND 1 or 2 stars in comparability domain AND 2 or 3 stars in outcome/exposure domain; Poor quality: 0 or 1 star in selection domain OR 0 stars in comparability domain OR 0 or 1 stars in outcome/exposure domain". Cochrane risk of bias tool was used for interventional studies.6 In assessing publications apposite for review, findings were assembled by health outcomes, and conclusions were measured that could be drawn given the strengths and limitations of each study. 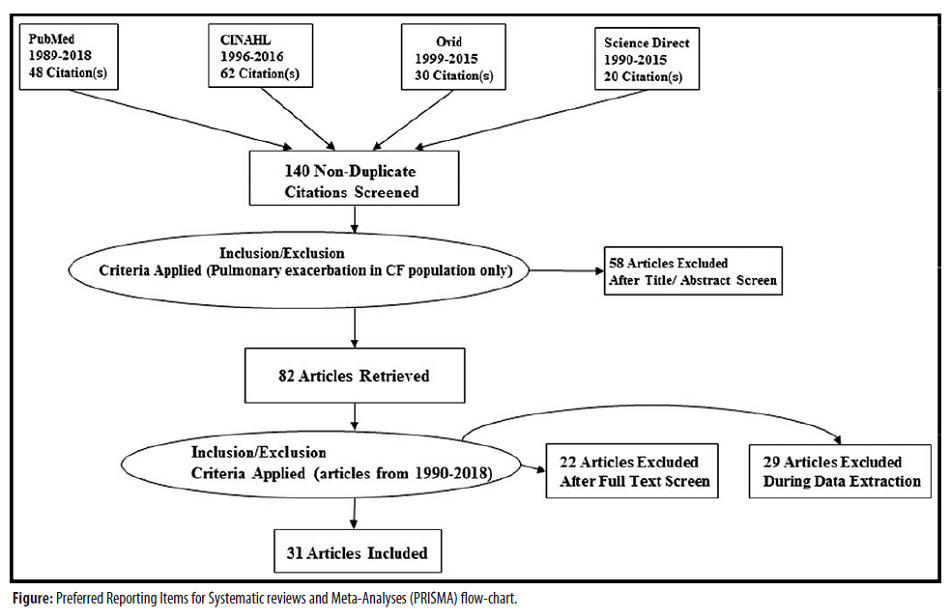 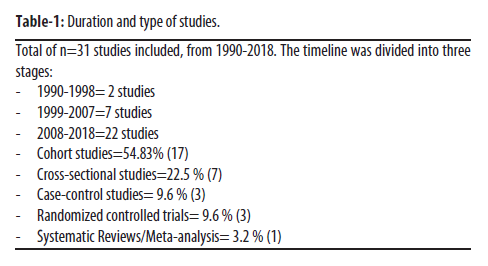 Progressive lung disease and functional decline are chief roots of morbidity and mortality in CF. The critical genetic factors noted through literature review were delta F508 mutations and CFTR mutations.9,10 Homozygous mutations showed a swift regression in pulmonary function compared to heterozygous mutations. High-risk genotype population for CFTR mutations showed pronounced risk for respiratory decline.8 Severity of mutations was addressed in two studies, showing patients with two severe mutations manifested earlier disease onset and severe respiratory impairment.7 Infectious agents highlighted in the studies reported significant P. aeruginosa association with pulmonary exacerbation and respiratory symptoms.11,12 S. maltophilia14 and burkholderia (B.) cepacian13 were among the other infections implicated in causing pulmonary decline. Viral respiratory infection was associated with exacerbations in one of the studies.15 Inflammatory biomarkers were reported as indicators of acute exacerbations, like CRP, Leukotriene B4 (LTB4) and IL-6.24 Calprotectin, CRP and VEGF showed a decline in serum and sputum levels following exacerbation treatment, implicating their role in acute episodes and a negative correlation with FEV1.24 Sputum desmosine levels in a study showed a positive association with inflammation and declined following treatment.21 Also, sCD14 levels were found to be substantially pronounced in patients who suffered an exacerbation and exhibited a role in predicting subsequent exacerbations.23 Overall, biomarkers can be used to predict, measure severity and responsiveness of treatment and tailor management. Studies showed that patients with lower BMI and pancreatic insufficiency presented with severe lung decline than pancreatic-sufficient patients. Better weight and height were associated with less complications and improved lung function.27 Vitamin deficiencies were highlighted, showing a positive correlation with pulmonary function and bouts of exacerbations. Vitamin D was also underscored, and it was found to have an anticatabolic effect and inflammation reduction.1 In another study, higher incidence of exacerbations and airway inflammation was linked to vitamin D deficiency.30 Deficiencies of vitamin A, vitamin E, carotenoids and antioxidants showed positive associations with disease progression.33,34 Geographic and regional variability was reported in the US, with the western region showing increased risks and subsequent hospitalisations compared to the northeast.35 Caucasians in the south showed lower risk relative to African Americans. SES was emphasised in two studies, showing that low SES and tobacco exposure had a role in lung function decline, and antibiotics were frequently prescribed to patients belonging to low SES.2,36 A systematic review in 2016 defined the rate of pulmonary regression in CF and identified influencing risk factors, while also summarising some findings about potential risk factors similar to the current review.37 The current review, along with the mentioned factors, analysed data describing other potential indicators, like S. maltophilia, viral infections and certain biomarkers showing correlations with both progression and management of respiratory disease, stressing their role in aiding diagnosis. We took a step forward and included studies describing low BMI, vitamin deficiencies, pancreatic insufficiency, and keeping pulmonary exacerbation as the main emphasis. The current review had certain limitations as it could not find any study from South Asia representing the risk factors prevalent in this region. Non-indexed journals and grey literature were not reviewed. Despite the limitations, however, the review calculated risk of bias for studies using standardized tools, such as NOS and the Cochrane risk of bias tools.5,6 Also, to our knowledge, the current review is the first to highlight major risk factors associated with pulmonary exacerbation that can be used as a guide for future research. On the basis of findings, we strongly stress the need for research in the domains of causes, identification of risk factors, and their roles in overall management of pulmonary exacerbations in CF cases.

Early detection of risk factors can result in prompt diagnosis and abate grave outcomes, reducing overall disease burden and mortality related to pulmonary exacerbations. This can lead to an overall reduced strain on healthcare, ensuring collective cost-effective and efficient management of CF.