Dapagliflozin: The outcome of use as add-on therapy in real-life clinical setting -An Audit

Objectives: Dapagliflozin is the first novel sodium glucose co transporter 2 inhibitor for the treatment of Type 2 diabetes. The aim of this audit was to evaluate its effectiveness and safety in a real-life clinical setting.

Results: At baseline, mean HbA1c was 82±19.21mmol/mol(9.7%) and mean weight was 102±18.1kg. The average reduction in HbA1c at 6 months was 13±7.23 mmol/mol (1%) whereas the average reduction in weight was 2 ±2.02 kg.. A mean reduction in daily insulin requirement by 12±8.3 units at 6 months compared to baseline was noted. There were certain complications in patients taking insulin and gliclazide including candidiasis, urinary tract infection and hypoglycaemia, and 4% patients discontinued dapagliflozin due to side effects.

Conclusion: Our results confirm that dapagliflozin can be used safely and effectively in a real-life setting.

The progressive nature of type 2 diabetes mellitus (T2DM) requires increasingly intensive anti-diabetes regimen over time. Dapagliflozin is the first novel sodium glucose co-transporter 2 (SGLT2) inhibitor approved and introduced into clinical practice in the United Kingdom towards the end of 2012, and in Pakistan in 2017. Dapagliflozin in randomised controlled trials (RCTs) have demonstrated meaningful improvement in glycaemic control, weight and blood pressure (BP) with glycated haemoglobin (HbA1c) reduction of 6-9 mmol/mol, weight-loss of around 2-4kg and systolic blood pressure (SBP) reduction of 3-5mmHg.1-4 The current study was planned to assess efficacy, tolerability and safety of dapagliflozin in a real-life clinical setting, and to compare its correlation with various clinical trials involving dapagliflozin.

The non-randomised, multi-centre, real-world, observational and prospective study was conducted from July 2013 to December 2014 at the endocrine department of four different National Health Service (NHS) district general hospitals in midlands region of United Kingdom. Ethical approval was not considered necessary as it was deemed a quality improvement audit in collaboration with different NHS Trust facilities to determine the appropriate use of dapagliflozin in a clinical setting. Electronic record forms were retrieved of people with Type 2 Diabetes mellitus who were initiated with dapagliflozin 10mg once a day as an add-on treatment in the out-patient clinical settings. The records of all people prescribed dapagliflozin were analysed, and data related to time, age, gender, duration of diabetes, HbA1C and weight was collected for each patient at baseline and at 6 months. Data was also collected on whether or not patients were already on insulin at the time of initiating dapagliflozin, modification of insulin dose after starting dapagliflozin, and side effects of dapagliflozin at subsequent follow-up visits at 3 and 6 months. Changes from baselines for HbA1c and weight were calculated. In cases where dapagliflozin had to be stopped due to side effects, data from subsequent visit was excluded from analysis. 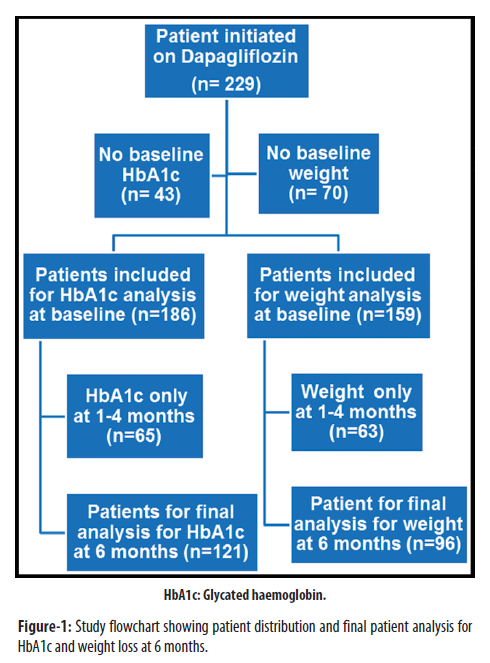 There was reduction at 6 months related to HbA1c, bodyweight and insulin dosage, and higher HbA1c and bodyweight as well as insulin usage meant better results at 6 months (Table-1).

Of the 121(52.8%) people who tolerated dapagliflozin through the follow-up period, 82(67.7%) were able to reduce or stop one or more other diabetic medications, including Glucagon-like peptide (GLP-1) agonists, sulphonylureas, pioglitazone and insulin, while the remaining 39(32.2%)continued with the previously prescribed diabetes medications along with dapagliflozin (Table-2).

Side effects were recorded for 23(10%) people, with genital candidiasis being the most common seen in 9 patients. The other common side effects were urinary tract infection that was seen in 8 patients and dehydration as evidence by raised urea levels and postural drop was seen in only 5 patients. Of the 5(21.7%) people who experienced hypoglycaemia, 4(80%) were on insulin and 1(20%) was on gliclazide. There was no documented instance of euglycaemic ketoacidosis in the cohort. Overall, 10(4.3%) patients stopped taking dapagliflozin during the follow-up period; 7(70%) because of adverse effects; and 3(30%) for unascertained reason. The most common side effect leading to discontinuation of dapagliflozin was genital candidiasis 3(30%).

Dapagliflozin is an SGLT2 inhibitor that has an insulinindependent mechanism inhibiting SGLT2 in the proximal tubule of the kidney, preventing glucose re-absorption.5,6 The resulting glycosuria also promotes weight-loss as well as urinary sodium-loss, which, along with weight reduction and osmotic diuresis, may be responsible in part for the BP-lowering effects observed.7 The current study on the use of dapagliflozin in real-life clinical setting demonstrated that dapaglifliozin was effective at reducing HbA1c and weight. Our cohort was similar in age to people included in clinical trials, although the mean duration of diabetes was longer than that of trial participants.1-4 The effectiveness of dapagliflozin in the current study was greater with regards to higher reduction in HbA1C and weight. This is possibly due to higher baseline HbA1C as well as the fact that dapagliflozin was continued only when it was clinically effective. In fact, the greatest improvement in HbA1c and weight was seen in those with the higher HbA1C and weight at the baseline. Our study also demonstrated that a significant number of patients could either reduce or stop other diabetic medications, including GLP-1 agonist and insulin, leading to additional cost benefits from a pharmaco-economic perspective. The current study also revealed that dapagliflozin can be safely prescribed in secondary-care setting with only 10% patients taking dapagliflozin reporting any side effects. However, those who experienced various side effects were likely to continue to take dapagliflozin with only 4% of the cohort discontinuing dapagliflozin due to side effects. In pre-registration trial patients taking concurrent metfomin and dapagliflozin, genital infections were reported in 8.8%, urinary tract infections (UTIs) 8.1%, any side effects event leading to discontinuation in 3% and 4.3% in patients taking concurrent insulin and dapagliflozin.1-4 By contrast, the current study had lower rates of genital infections (3.93%), UTIs (3.49%), hypoglycaemia (2.18%) and dehydration (2.18%) than reported in these trials.1-4 However, the current study showed similar incidence of discontinuation of dapagliflozin (4.36%) as was the case with clinical trials.1-4 The current study has a number of limitations, such as no control group or placebo arm for comparison as well as some missing data for the outcome measures of HbA1c and weight that represent the difficulties in measuring and documenting these parameters in routine clinical practice. The study also did not include SBP measurement in data as only 13 patients has SBP monitored at both baseline and 6-month follow-up. Also, routinely collected data to assess the prevalence of side effects is likely to lead to some underestimation of frequency, as minor side effects may not be reported in clinics.

Dapagliflozin was found to be effective for use in clinical practice for the reduction of HbA1C and weight. There was lower incidence of side effects compared to clinical trials. There was also a considerable reduction of the use of other oral anti-diabetes medication, indicating cost-effectiveness of dapagliflozin as a novel glucose-lowering agent.