Objective: To examine the mediating role of need of approval between perceived husband's support and postpartum depression.

Methods: The cross-sectional study was conducted from December 2017 to May 2018 and comprised women diagnosed with postpartum depression at different public-sector hospitals of district Gujarat in the Punjab province of Pakistan. Urdu versions of the Marital Empathy Scale, the Need for Approval subscale of the Dysfunctional Attitude Scale Form A-17, and the Edinburgh Postnatal Depression Scale were used to collect relevant data which was then analysed using SPSS (version 26).

Conclusion: Perceived husband's support reduced the need of approval, which in turn, lowered the degree of postpartum depression.

Postpartum depression (PPD) is a serious and complex mood disorder that affects not only the mental well-being of the mother, but also has adverse consequences for the poor postpartum physical health.1 A study2 observed that Pakistan has the highest PPD prevalence in Asia, ranging from 28% to 63%. Considering the limited evidence regarding the use of pharmacological interventions in PPD treatment, attention to psychosocial factors associated with depression that would suggest efficacious psychosocial interventions seems warranted. Perceived husband's support (PHS) appears to be an important protective psychosocial factor against PPD development because it may reduce women's dependence on their husbands' approval. PHS is conceptualised as the subjective perception of the support a woman may have from her husband, and this is not necessarily a reflection of actual supportive behaviour of one's husband.3 Research has consistently shown negative relationship of PPD with PHS.4,5 Several studies in Pakistan have shown the protective role of husband's and family's support in combating PPD.6,7 The development of PPD and lack of husband's support are positively connected.8,9 The solid spousal relationship is the key in the pre-birth period, which means that a supportive bond may support a mother's adequacy by giving acknowledgment that she is performing well in her maternal role.10 Thus, a supportive husband is likely to be an approving and appreciating husband and may serve as a shield against PPD development. Need for approval (NoP) refers to being overly conscious about others' judgments and reliance on their approval.11 NoP might cause or maintain depressive symptoms.12 because, being a dysfunctional attitude, NoP may lead to an implausible standard that depends on others' judgments, which may contribute to PPD development.13 Mothers depending upon others for approval and social direction14 can process the data in a way that can trigger a more serious risk for the production of depressive symptoms.5 Moms looking for approval may consider themselves powerless and unable to control lives.15 The self-esteem of people having high NoP is related to their belief about how positively others evaluate or judge them.16 NoP has been positively associated with depressive symptoms and negatively related to neuroticism and self-esteem.17 Thus, people with high NoP are vulnerable to depression because of their contingent self-esteem i.e., their self-worth is based on external factors in different interpersonal contexts. Establishing one's self-esteem from other's approval is an external contingency, which is beyond one's control and may result in depressive symptoms17 when one is not positively appraised in a salient interpersonal context. Moms who look for approval from their husbands probably process information in a negative or distorted manner that strengthens their beliefs about the absence of their own effectiveness as moms.18 For mothers suffering from PPD, the presence or the availability of their husband is conceived as the provision of the approval, security and affirmation,19 which may satiate their NoP. Their PPD may hamper their capability and their aspiration to play the effective role of mother and wife and they need their husband's emotional, physical and cognitive involvement to realise their potential of being a good wife and mother. The current study was planned to assess the effect of PHS on NoP and PPD, to examine the influence of NoP on PPD, and to investigate the mediating role of NoP between PHS and PPD. 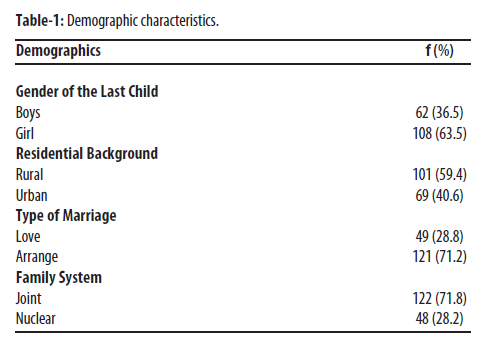 The overall mean age was 29.81±5.66 years (range: 18-42 years). All instruments demonstrated commendable degree of internal consistency and the focal variables were significantly related to one another, while skewness values suggested that all variables were symmetrically distributed (Table-2). 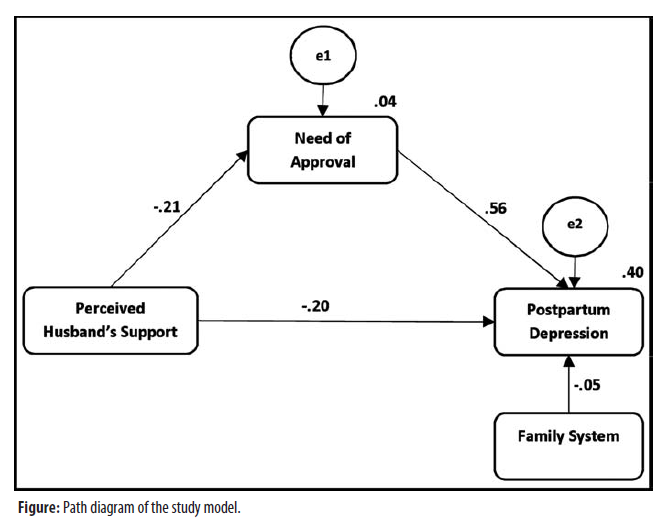 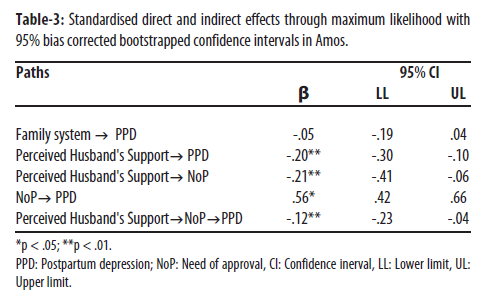 The first hypothesis of the study was that PHS would be negatively associated with PPD and NoP. Results provided empirical support for the hypothesis. Research has consistently shown negative relationship of PPD to instrumental and emotional support.5,6 For instance, spousal support turned out to be the negative predictor of postnatal depression in mothers from Karachi.7 Research has also demonstrated that absence or lack of social support is one of the important risk factors for PPD among pregnant and postpartum women.23 Women having supportive husbands are less likely to be dependent on their husbands' approval since they know that their husbands would support and appreciate them, therefore, they are likely to have lower degree of NoP. The second hypothesis of the present study was also supported as significant positive relationship was found between NoP and PPD. According to Beck's hypothesis,5 the need for approval may be conceived as a dysfunctional state of mind as it is an implausible standard that depends on others' judgments. Mothers depending upon others for approval and social direction can process the data in a way that can trigger a more serious risk for the production of depressive appearances.14 Moms looking for approval may perceive themselves as powerless and unable to control various incidents in their lives. This feeling of helplessness would lead to depression. Our findings are in line with those of a study24 which found that depressed mothers could have higher scores on self-criticism compared to their non-depressed counterparts. More specifically, it found that reliance or dependence on significant others could be a protective factor for non-depressed mothers, but the same appeared to be a risk factor for depressed mothers. This line of reasoning has also been supported by pertinent research, which indicated that need for approval was an important precursor of general depression and anxiety.25 Excessive NoP may also lead to conflicts in romantic and matrimonial relationships, which may lead to depression.15 The results also supported the third hypothesis of the current study, which suggested that NoP would mediate between PHS and PPD. The present study has a few limitations. Firstly, all the participants belonged to a single district of Punjab province, owing to which the external validity of the findings might have been somewhat compromised. Secondly, the study might have shown common method variance due to the use of self-reporting tools, which might have inflated the relationship among variables of the present research. Thirdly, the study does not account for cause-and-effect relationships among variables because it was cross-sectional in nature. Fourthly, the participants were already diagnosed PPD patients and the researchers did not screen them out for other potential comorbid psychological disorders. Finally, owing to the quantitative nature of the study, detailed case histories of patients could not be consulted, which could have been a source of detailed and enriched information.

Women with high degree of PHS were less vulnerable to PPD. This delineated that psychosocial factors play important role in the developmental course of PPD. Specifically, PHS was found to be a salient protective factor in relation to PPD as it not only directly reduced PPD, but it also lessened women's dependence on their husbands' approval, which may attenuate women's vulnerability to PPD.

9. McKeever A, Agius M, Mohr P. A review of the epidemiology of major depressive disorder and of its consequences for society and the individual. Psychiatr Danub. 2017; 29:222-31.

11. Batmaz S, Ozdel K. Psychometric properties of the revised and abbreviated form of the Turkish version of the Dysfunctional Attitude Scale. Psychol Rep.2020; 118:180-98.

15. Batt MM, Duffy KA, Novick AM, Metcalf CA, Epperson CN. Is postpartum depression different from depression occurring outside of the perinatal period? A review of the evidence. Focus (Am Psychiatr Publ). 2020; 18:106-19.