Objective: To assess the significance of serum vascular endothelial growth factor-A (VEGF-A) as a potential biomarker for the diagnosis of ovarian cancer instead of cancer antigen-125 (CA-125).

Conclusion: The detection of high concentrations of serum VEGF-A level supported its use as one of the diagnostic parameters in the timely investigation of ovarian cancer.

Ovarian cancer is ranked fifth among the most common types of cancer and is associated with significant mortality among gynaecological malignancies in females.1 In early stages, ovarian cancer typically causes few symptoms with late presentation.2 Among the developed countries, it affects approximately 1 in 75 women with less than 30% survival rate in 5 years because approximately 70% of the patients are diagnosed at later stages. In the United States, every year approximately 21,550 females develop 'de novo' ovarian cancer and approximately 14,600 females die from this disease.3 Therefore, timely detection of this disease might be of great prognostic significance for the betterment of clinical outcome. Up till now, the only biomarker that is most widely used for early diagnosis of ovarian cancer is the cancer antigen- 125 (CA-125) and it is found throughout adult tissues and is obtained from the epithelium of female genital tract i.e. Mullerian (endocervical, endometrial, and tubal) and coelom (peritoneum, pericardium, and mesothelial) cells of the pleura.4 It is a high-molecular-weight glycoprotein and is not expressed by normal ovarian epithelium,5 but among the ovarian cancer biomarkers it has the highest sensitivity and specificity. Nakae et al. showed that CA- 125 had 84.4% and 66.3% sensitivity and specificity respectively among ovarian cancer patients, benign ovarian tumour and female healthy individuals. CA-125 levels are raised during ovulation and in benign conditions like endometriosis and fibroids which may lead to false-positive results. Therefore, threshold value of 30-35U/ml of this antigen has been established and is used to identify patients presenting with clinical symptoms of ovarian cancer. Furthermore, it is suitable for postmenopausal women.6 One of the important mediators of angiogenesis in tumour development is vascular endothelial growth factor (VEGF) that stimulates propagation of endothelial and their progenitor cells within the tumour.7 For the diagnosis of malignant diseases, VEGF was for the first time documented as a potential serum biomarker in 1994. The family of VEGF gene has seven members from VEGFA to VEGF-F, along with placental growth factor (PIGF), that are important for angiogenesis and promotes the growth and metastasis of neoplasms.8 Clinical significance of VEGF-A in tumour biology is demonstrated by its ability to increase micro-vascular permeability and stimulation of tumour growth. Tumours cannot grow larger than 2-3mm in size without developing their own blood supply,9,10 therefore VEGF-Aaided neovascularisation and angiogenesis promote growth, invasion and metastasis of the tumour.11 The current study was planned to assess the significance of serum VEGF-A as a potential biomarker for the diagnosis of ovarian cancer instead of CA-125.

The case-control study was conducted at the obstetrics departments of Sir Ganga Ram Hospital and Jinnah Hospital, Lahore, Pakistan, from April to September 2018. After approval from the institutional ethics review board of the University of Lahore, the sample size was calculated using the classical formula12,13 with 1:1 ratio between controls and cases on OpenEpi online software.14 The prevalence of ovarian cancer was taken as 4.8%15 and calculations were done with 95% confidence interval (CI) and 80% power. In view of possible dropouts, the calculated sample size was inflated by 15%. Those included were pre-operative epithelial ovarian cancer patients having pelvic mass on trans-vaginal ultrasound (TVUS) with increased CA-125 without chemotherapy or any other systemic disease. Subjects having any other tumour or those who underwent postoperative chemotherapy were excluded. For all the subjects i.e. patient's and control's, proforma and consent forms were dully filled prior to sampling. At the outset of venipuncture sampling, 5ml peripheral venous blood was drawn from all the subjects including healthy women, ovarian cancer patients having malignancy and patients having benign ovarian neoplasm. The malignant ovarian cancer patients were categorised according to the tumour staging following the guidelines of the International Federation of Gynaecology and Obstetrics (FIGO).16 The blood samples were centrifuged. Serum was decanted and stored in prelabelled micro-centrifuge tubes at -20°C after addition of 1X protease inhibitor to each sample to reduce protein degradation. Blood samples were taken preoperatively and serum VEGF-A and CA-125 levels were analysed. VEGF-A levels in the serum were estimated using Luminex multi-analyte profiling (xMAP) flow cytometry technique which allows simultaneous detection of up to 100 different analytes in a single sample. The human angiogenesis/growth factor magnetic bead panel 1 (Cat # HAGP1MAG-12K.60K) kit was utilised and the procedure was adopted according to the manufacturer's protocol. Serum CA-125 levels were estimated using CanAg enzyme immunoassays (EIA) kit (Art # 400-10; FUJIREBIO), according to the manufacturer's protocol. All the calibrators, controls and samples were taken in duplicate and EIA was performed manually. The absorbance was read at 450nm in a microplate spectrophotometer and calculations were done by EIA plate reader. Data was analysed using SPSS 20. Serum VEGF-A and CA- 125 levels were recorded as mean ± standard deviation. Student's 't' test and analyses of variance (ANOVA) were used to measure the correlation between VEGF-A and CA- 125. The probability of malignancy due to VEGF-A and CA- 125 levels was estimated using the logistic regression model. Both receiver operator characteristic (ROC) curve and logistic regression was calculated by Med-Calc version 15.6.1. Sensitivity and specificity were calculated from the likely cut-off value of the estimated probability of malignancy. ROC curve constructed17 was used to interpret the effect of both VEGF-A and CA-125 on malignancy with the help of area under curve (AUC).

Box plot was constructed as a standardized way to split the data into five quartiles (Figure-1). 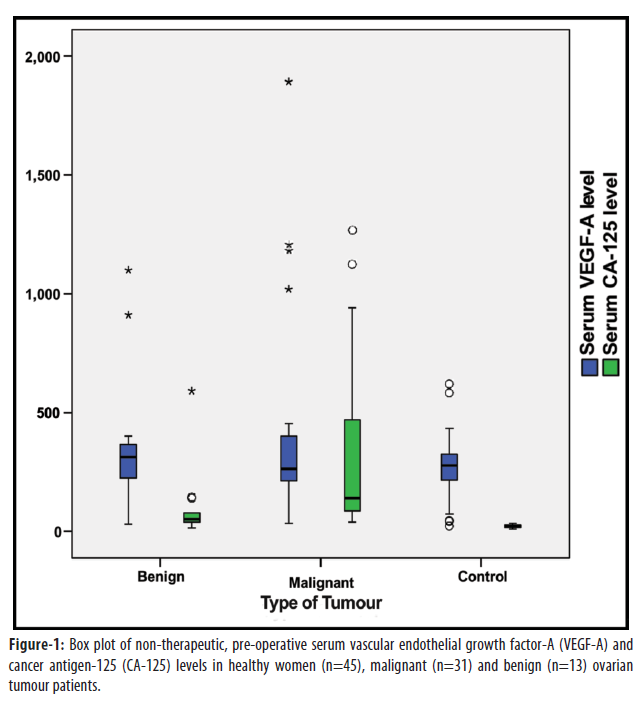 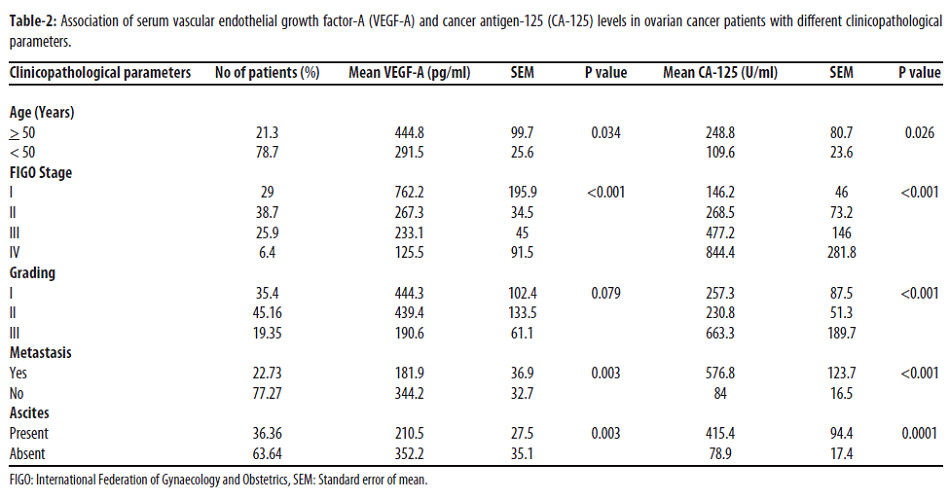 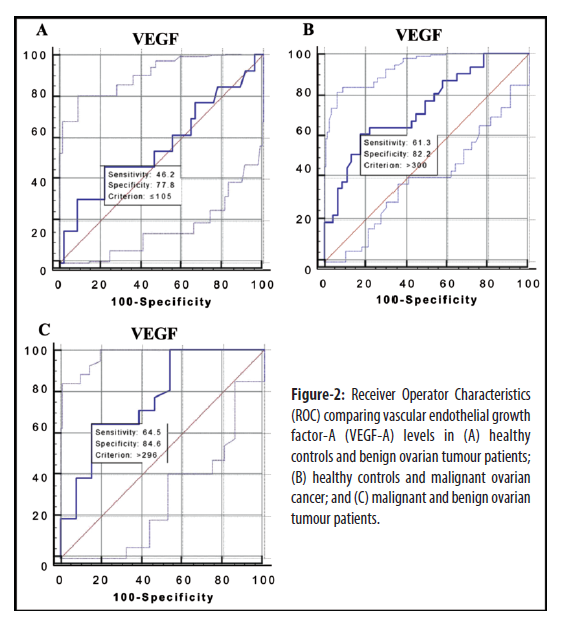 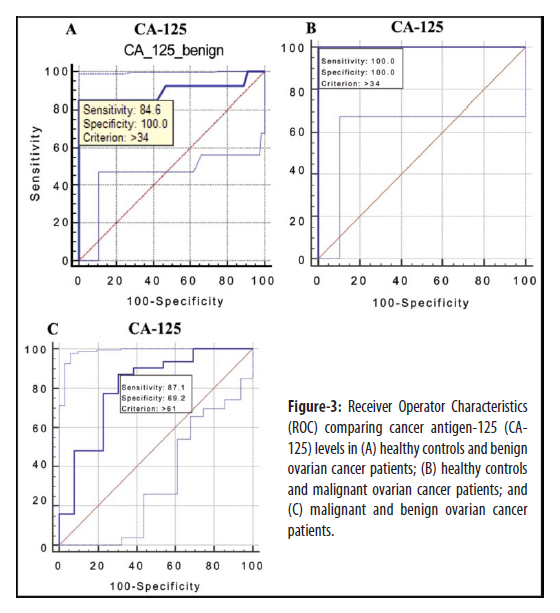 Metastasis of tumour cells aided by angiogenesis and neovascularisation in ovarian cancer is the major cause of cancer deaths in females, making it a silent killer.18-20 The growth and metastasis of neoplasm depend on adequate vascular support. VEGF-A is a specific mitogen having dual function, aiding the tumour vessel generation and also enhancing the permeability of local capillaries, which causes increase in the proliferation of vascular endothelial cells and ultimately produces ascites.21,22 The current study found significantly low serum VEGF-A in healthy controls compared to malignant ovarian cancer patients, but these values were high compared to serum CA-125 in healthy controls. The reason for this variation is that in the female reproductive system, angiogenesis is naturally observed during ovulation, endometrial proliferation and in the growth of corpus luteum.23 VEGF-A may be involved in the fluid development in ovarian cysts, and VEGF-A-mediated angiogenesis aids in the growth of ovarian follicle. Another explanation for low concentrations of VEGF-A in comparison to CA-125 in malignant patients might be due to clearance of circulatory VEGF-A due to shorter halflife, while CA-125 has half-life of more than 20 days. So low levels of VEGF-A in malignant patients could be due to its rapid metabolism and excretion.24 In case of serum CA-125, there was significantly low levels in the healthy controls compared to malignant and benign patients. The reason might be that CA-125 is not secreted by normal ovarian epithelium5 which causes very low level in the healthy individual serum. In ovarian cancer patients, it gets raised to ~50% in stage I and ~90% in an advanced stage of the disease.25,26 The current study found significantly high CA-125 levels in the serum of malignant patients compared to benign patients. It has been reported previously that serum CA-125 levels may be raised in benign conditions, like endometriosis, ovarian cysts, pelvic inflammatory disease and uterine fibroids.27,28 Furthermore the present study used ROC curve and regression model that was applied to determine the sensitivity and specificity of both the biomarkers. A significant effect of serum VEGF-A was observed on the odds of malignant against healthy women controls by applying univariate logistic regression model. At cut-off >300 pg/ml, the sensitivity of VEGF-A was 61.2% and specificity was 82.2%. However, on the odds of benign versus healthy female controls, a non-significant effect was seen. At cut-off >105pg/ml, the sensitivity and specificity of VEGF-A was achieved to be 46.2% and 77.7%. With respect to VEGF-A regression model, a significant influence on data with malignant versus benign was observed. At cut-off >296pg/ml, the sensitivity of VEGF-A was 64.5% and specificity was 84.6%. However, CA-125 had a significant effect on the data related to malignant against healthy controls during logistic regression model. Sensitivity and specificity of 100% was observed at cut-off value of >34 U/ml. Similarly, CA-125 had significant effect on the odds of benign versus healthy women controls. At cut-off >34U/ml, the sensitivity and specificity was 100%. In previous studies, the sensitivity and specificity of VEGF-A was observed to be 54% and 77% respectively at cut-off 363.7pg/ml, while sensitivity and specificity of CA-125 was 85% and 93% respectively at 35U/ml cut-off value. The sensitivity and specificity of CA-125 was in accordance with the already reported studies in which CA-125 was stated to be a beneficial diagnostic biomarker to distinguish the ovarian cancer patients from malignant against benign.29-31 Furthermore, CA-125 also had a significant influence in the current study on data with malignant versus benign cases. At cut-off >61U/ml, sensitivity was 87.1% and specificity was 69.2%. Tumour development depends upon its ability to switch the angiogenesis process. The haemostasis between proangiogenic and anti-angiogenic factors leads to tumoural angiogenesis. In ovarian cancer, the importance of serum biomarkers, like VEGF and apoptotic, are not well defined. VEGF-A has shown an essential role in the pathogenesis of ovarian cancer11,32,33 i.e., both in non-malignant and metastatic forms of the disease. It has been reported that ovarian cancer patients with stage I disease had significant high VEGF levels compared to benign ovarian cancer patients. They also possessed 96% sensitivity when combined with CA-125, but with low specificity.11,32,33 This is in complete accordance with the current study. The amount of VEGF varies among tumour, serum, plasma, platelets and leukocytes, and it has been reported previously that the amount of VEGF-A is 7-70, 31-306, 1.1- 10.8 and 14-141 times higher in tumour than in serum, plasma, platelets and leukocytes respectively.34 FIGO stage I depicts a stage where tumour cell has to build, and clearly indicates higher values in serum, while, with the growth of tumour, the concentration of VEGF-A becomes more localised, hence a decrease in concentration of VEGF-A in serum is observed.34 Moreover, plasma VEGF was also studied in breast cancer cases and indicated to be useful with high diagnostic power for stage I and II cancer and between benign and cancer cases.35 Recent studies identified that the serum levels of VEGF-C were also raised in ovarian cancer patients at FIGO stage III compared to benign ovarian disease and healthy individuals.36

Serum VEGF-A can be used as a strong diagnostic biomarker in the early stages of ovarian cancer. Moreover, VEGF-A has inverse relation in terms of concentration with the advancement of the disease.

Disclaimer: The text is based on MPhil thesis.