Relationship between psychological distress, quality of life and resilience among medical and non-medical students

Objective: To explore inherent associations between psychological distress and resilience, and its effect on quality of life among medical and non-medical students.

Methods: The cross-sectional study was conducted from December 2018 to January 2020 after approval from the Department of Psychology Ethics Committee of the International Islamic University, Islamabad, and comprised medical and non-medical students of either gender enrolled with different institutions of higher learning in Rawalpindi and Islamabad. Data were obtained using Brief Resilience Scale, Kessler Psychological Distress Scale and Quality of Life Scale. Data was analysed using SPSS.

Conclusion: Resilience needs to be promoted among students, particularly medical students, as it may help in reduction and adequate management of academic distress levels.

The cross-sectional study was conducted from December 2018 to January 2020 in Islamabad, Pakistan. After approval from the ethics review committee of the Department of Psychology, International Islamic University, Islamabad, the sample size was calculated using OpenEpi calculator with 95% confidence interval (CI) and 50% power of test.16 The sample was raised using purposive stratified sample from among full-time undergraduate medical and non-medical students of either gender from the Shifa College of Medicine, Islamabad, the Foundation University, Islamabad, the Rawalpindi Women University, and the Government Viqar-un-Nisa Post Graduate College for Women, Rawalpindi. Students with any reported physical or mental illness or having a physical disability or studying part-time were excluded. Data was collected after taking informed consent from all the subjects, using self-reporting Brief Resilience Scale (BRS), Kessler 10-item Psychological Distress Scale (K10) and the World Health Organisation (WHO) QOL Scale (WHOQOL-BREF). BRS10 was used to measure psychological resilience. It comprises six items; three negative items and three positively phrased items. All the subjects were required to respond on a five-point Likert scale ranging from 'strongly disagree' to 'strongly agree'. The scale has a good internal consistency with Cronbach's alpha value ranging 0.80-0.91.9 K10 measures depression and anxiety.17 Each statement addresses emotional factor and is based on a five-point Likert scale. It has a high internal consistency of 0.93.17 The WHOQOL-BREF has high reliability ranging from 0.70 to 0.93 for all domains of the scale. It consists of 26 items that were scored on a 5-point Likert scale ranging from 'extremely satisfied' to 'extremely dissatisfied'. The scale has four domains, including physical (7 items), psychological (6 items), social (3 items) and environmental (8 items) whereas the first two items measure the overall perceived QOL. The total score on the four domains denotes an individual's overall perception of QOL, with higher score indicating higher QOL perceived by the respondent. Hierarchical Regression Analysis and independent sample t-test were used for analysing data for present study using SPSS version 25.

Of the 300 subjects, 150 (50%) each were medical and nonmedical students. Within both groups, 75 (50%) each were males and females. The reliability coefficients of the scales used indicated good internal consistency, while univariate normality was not problematic (Table-1). 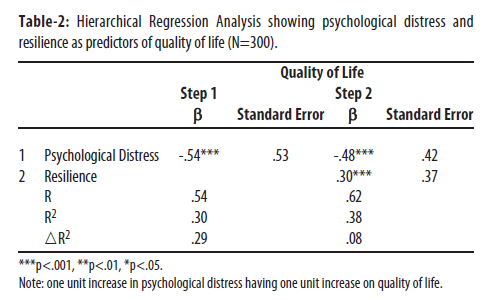 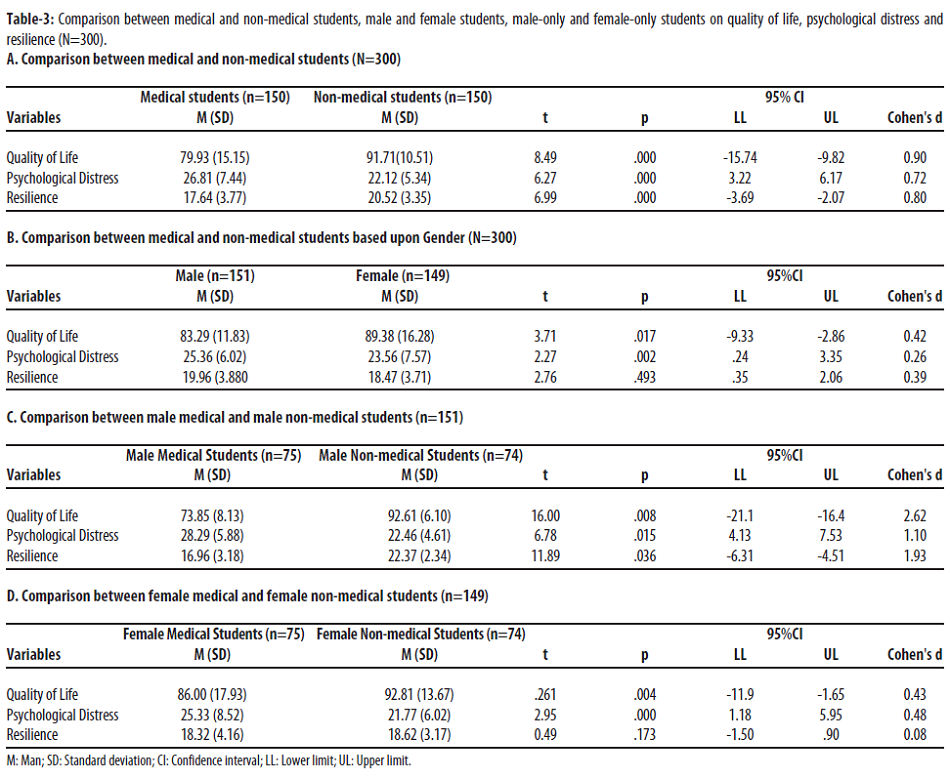 The present study was carried out to examine the vicious cycle of distress, QOL and resilience among a population of medical and non-medical students. To expand the prospect of theory, gender differences were also tested for the study variables. The first study hypothesis stating that psychological distress negatively predicts QOL was supported by the findings. If the students are not utilising effective coping skills and stress management techniques, they often develop psychological symptoms of distress, resulting in compromised consequences which may end up with lower QOL.18 This finding is specifically significant, as psychological distress is widely used as an indicator of mental health and leads to high frequency of depression, anxiety and stress among medical students.5 The second hypothesis suggesting a significant positive relationship between QOL and resilience was in line with the past research where higher resilience was found related to lower levels of distress and better well-being among students in general and medical students in particular.19 As a study20 suggested, resilience cannot be presented as a personality trait, rather it is a behaviour or skill which can be learned at any stage of life. Since students, both medical and non-medical, are cultured enough to learn new skills and aids that could help them overcome obstacles in their professional paths. Psychological distress is a perfidious obstacle in one's life, and that is why it is imperative to have a resilient attitude to overcome problems and be successful in life. The third hypothesis stating higher levels of psychological distress and lower levels of resilience and QOL among medical compared to non-medical students was also supported by the findings which were also in line with previous research.21 Moreover, medical students avoid seeking help for psychological distress due to fear of stigma from the medical community which subsequently leads to decreased levels of resilience. In Pakistan, medicine studies are believed to be a hectic course of study requiring increased sense of responsibility from students under stressful conditions leading to increased level of psychological distress. Students from other areas of knowledge are found to have lower levels of psychological distress and higher resilience. One of the reasons can be that non-medical students have several options and opportunities to choose from in their professional lives, whereas medical students, after getting enrolled in medicine, experience limited career opportunities.22 Also, the financial burden which their families have to bear with respect to their education also leaves them with a compelling attitude of winning the race and choosing a specialisation which could enable them to earn back their investment. Such findings are especially noteworthy as past research suggests that medical students with higher levels of resilience have a better QOL.23 Therefore, the findings imply that developing resilience in one's personality can help overcome psychological distress and increased capacity to take up challenges in the medical profession.24 The fourth study hypothesis was partially supported by the results, indicating that males scored higher on psychological distress in comparison with females, while females scored higher on QOL than males. However, nonsignificant difference was found between males and females on the resilience scale. These findings are in line with a previous research indicating that male medical students experience a tendency of developing psychological distress symptoms during the course of their education which is a source of growing concern among the educationalists and related professionals. One possible explanation is that in a patriarchal society, such as Pakistan, male students are expected to bear greater responsibility of the future for their families in particular and society in general. Therefore, male students studying medicine are more likely to develop psychological distress. Another possible interpretation of this finding can be the trend of choosing primary care specialty areas, such as surgery, paediatrics, general medicine etc., among male medical students that usually offer less controlled working hours due to emergency services which these medical areas offer. On the other hand, female medical students generally prefer to choose non-primary care specialty areas, such as radiology, dermatology etc., in order to maintain a work-family balance, as such specialty areas offer the professionals a controlled work life and non-emergency timings. It could be interpreted from the above findings that a comparatively stress-free perception of future professional life among female medical students enable them to have a better QOL.25 The present study has some limitations as it was conducted using a convenient sample size and most of the subjects were from the middle and upper-middle socioeconomic class, while those with lower socioeconomic status could have revealed important findings related to mental health issues and symptom management. Also, investigation into other relevant demographic correlates, like marital status of students, may have also provided valuable information. Future studies should focus on these areas as well. On the basis of the findings, however, the current study suggests intervention programmes at educational institutions, more specifically at medical institutions, to foster psychological support, better QOL and increased resilience. The current findings will help psychologists and medical practitioners to improve mental health of medical and non-medical students and would open new dimensions for future researchers. Also, the current study would enable mental health practitioners to identify students at risk of developing psychological distress, and help them with constructive coping mechanisms.

Resilience needs to be promoted among students, particularly medical students, as it may help in reduction and adequate management of academic distress levels.