Objective: To find out the frequency of low back pain in young adults and its relationship with the mattresses being used.

Method: The cross-sectional study was conducted from September 2019 to February 2020 in Rawalpindi and Islamabad, Pakistan, and comprised young adults aged 18-35 years who were using the same kind of mattress for more than 3 months. Data was collected using a self-structured questionnaire along with the Modified Oswestry Scale and the Numeric Pain Rating Scale. Data was analysed using SPSS 24.

Conclusion: Low back pain was found to be a frequent occurrence in young adults and it was more prevalent in those using firm or foam mattresses for more than three years.

Low back pain (LBP) is not a disease itself, but it is an indication of various causes including pain near the midline, may be localised sometimes, which exists between the costal margin and the inferior gluteal folds with or without referred leg pain.1,2 LBP can cause certain disabilities, such as significant limitations, inactivity of daily life routine, loss of social functioning, and disturbance of psychological functioning, ultimately leading to an economic impact on individuals, society and quality of life (QOL)3,4 LBP prevalence has been increasing worldwide, with recent studies reporting 64.8%, 19.8%, 69.5%, 40.6% and 36.2% in Bangladesh, India, Nepal, Pakistan and Sri Lanka respectively.5 Generally, LBP is categorised into non-mechanical pain and mechanical back pain. Non-mechanical back pain can be caused by a specific pathophysiological mechanism, such as inflammatory diseases, tumours or infiltrative lesions, metabolic and acquired disorders.6,7 Mechanical back pain is originated from the spine, intervertebral discs or surrounding soft tissues which can be caused without any specific pathology, and is also called non-specific LBP. There are certain factors involved in the causation of mechanical back pain, including abnormal lifting motions, inappropriate stress on back and maintaining incorrect posture while resting using inappropriate mattresses.8 In general, standard mattresses are a set of soft or hard material or metal springs enwrapped by a strapping material which are then sewn in a cover.9 The main purpose of using a mattress is to provide support to body posture so that the normal and neutral postural position can be maintained by adapting the normal spinal alignment and adjusting it according to the body curvature to distribute weight evenly.10 There are varying effects of different mattresses on the biomechanics of the body depending on mattress material, such as the pressure implied on the body lying on the mattress which is increased in proportion to the hardness of the mattress.11 This results in skin deformation as the pressure on the body is increased. High loading leads to the activation of mechanoreceptors nociceptors, ultimately resulting in mechanical pain.12 Therefore, it is believed that pressure is related to pain perception.10 Recent studies have revealed that the mattress should remain flat or have a good spring action which should support body curvature,13 providing increased bed mobility, comfortable sleep and not exerting unwanted compressive forces.14 The lumbar support distributes the force of gravity more over the pelvic, lumbar and thoracic area while maintaining the lumbar lordosis in supine position, suggesting that uniform body support reduces muscular activity during sleep.15 Other than the mattresses, sleeping positions also contribute significantly to the initiation of LBP. In supine sleeping position, the pressure on the spine and inter-discs is reduced to 20% compared to the relaxed standing position. But the tension in psoas muscle increases load on the lumbar spine and causes hyperlodosis in the lumbar region.15,16 The usage of proper mattress suitable for the posture has been a topic of debate for a long time, with most physicians recommending standard hard or extra firm mattress to maintain lumbar lordosis without any scientific evidence.17 The current study was planned to determine LBP frequency in young adults and to find the relationship between LBP and different mattresses.

The cross-sectional study was conducted from September 2019 to February 2020 in different colleges, universities and offices located in Rawalpindi and Islamabad, Pakistan. After approval from the institutional ethics review board of Shifa Tameer-e-Millat University, Islamabad, the sample size was calculated using Raosoft, taking total population size as 20,000 with 95% confidence interval (CI) and 5.08% margin of error.18 The sample was raised using non-probability convenience sampling technique from among young adults aged 18- 35 years who were using the same kind of mattress for more than 3 months. Those excluded were individuals with any injury or deformity of spine, diagnosed lumbar pathology and post-surgery patients. After taking written informed consent from each subject, data was collected using a self-structured questionnaire circulated through Google forms, along with the numeric pain rating scale (NPRS) and the modified Oswestry scale (MOS). The questionnaire explored demographic information, the mattresses the subjects were using, the duration from which they were using those mattresses, and their sleeping positions. They were also asked about the onset and nature of the pain. The 11-point NPRS measured pain intensity, where 0 = no pain and 10 = worst pain ever experienced. The test-retest reliability of NPRS has been defined from moderate to high, varying from 0.67 to 0.97.19 The MOS is the most frequently used scale to measure the level of functional disability, having a total of 10 items. Each of them is scored 0-5, with high scores show greater disability.20 Cronbach alpha (a) for MOS ranges from 0.71 to 0.87, and the test-retest reliability ranges from 0.83 to 0.99.21 Data was analysed using SPSS 24. 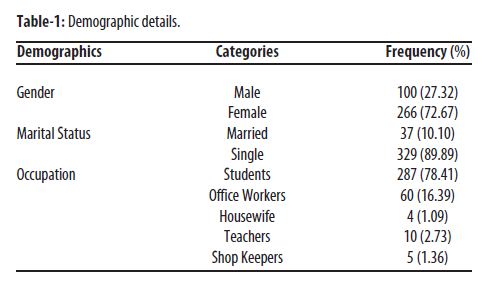 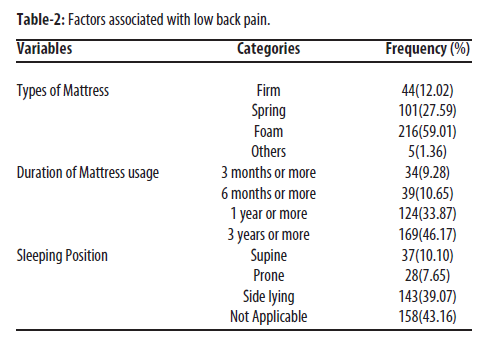 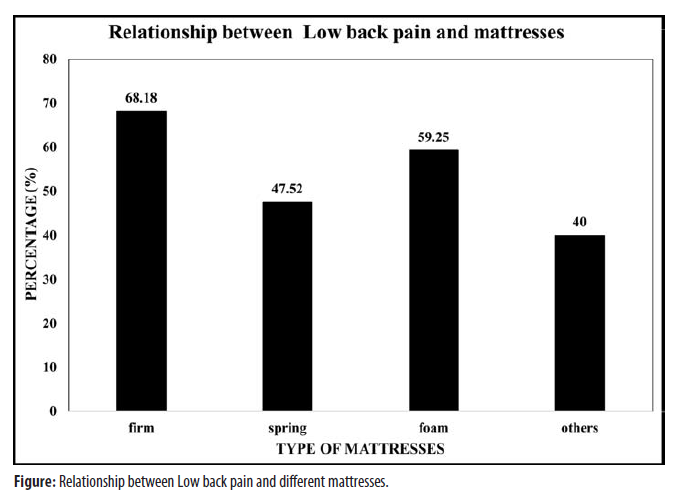 According to MOS, 158(75.9%) of the LBP subjects had minimal disability, 38(18.3%) moderate and 12(5.8%) had severe disability. There was no significant association of LBP with the type of mattress, the duration of mattress usage, and the company of mattress (p>0.05).

The study found that that pain was more prevalent in users of firm mattresses. In a randomised, double-blind, controlled, multicentre trial, the effect of different firmness of mattresses on the clinical course of patients with chronic non-specific LBP showed that patients who usually used medium firm mattresses got improvement in their pain-related disability, while the disability was more prevalent in users of firm mattresses.7 The possible reason is the greater pressure on bony prominences, like hips and shoulders.14 Firm mattresses are not always damaging for the lower back, but in older ages these mattresses provide overall comfort and ease of rolling.10 LBP was also more prevalent in users of foam mattresses in the current study. A study in 2017 evaluated the effect of different types of bed material in the body contact pressure profiles in various sleeping postures, using peak body pressure and pressure distribution as outcome measures. It revealed that a foam mattress does not significantly reduce peak body contact pressure on the torso and the buttocks, causing LBP.22 A study also showed that patients with non-specific LBP get no improvement by using soft or foam mattresses because they do not maintain proper body posture, especially in the side-lying position.22 A study revealed that regular use of cotton mattresses instead of foam mattresses provide comfort in LBP patients.23,24 The association of LBP with firm and foam mattresses is because these do not adjust according to the spinal curvature and affect the biomechanics of the body. The weight is not equally distributed and there is less support at the lumbar region, as the shoulder and the pelvic area is in more contact in the supine position. In the side-lying position, the shoulder and the hip are sagged into the foam mattress causing lateral bending of the spine in the other direction.15 In firm mattress, the users have poor blood circulation and uncomfortable sensation due to high and concentrated pressure.10 A study in 2014 regarding the evaluation of compatibility between humans and mattresses using electromyography (EMG) supported the results of the current study that there is less association of LBP with spring mattresses which generate low muscle loading while performing bed mobility activities.25 A study to predict human body indentation lying on a spring mattress using a neural network approach showed that if the springs in the mattresses were arranged appropriately to maintain the stiffness, they provided more comfort. It was also revealed that spring mattress is better than the other types of mattresses because in a spring mattress there is no sagging and it adjusts itself to the body curvature, maintaining normal spinal alignment as springs adjust automatically with body areas having extreme pressure and prominent curves.26 The current study has limitations as it was unable to exclude postural and ergonomic factors of LBP in young adults.