Objective: To assess the role of micro ribonucleic acid 425 in colorectal carcinogenesis.

Conclusion: Over-expression of micro ribonucleic acid-425 was found to have the potential to inhibit sphere formation as well as migration and invasion of HCT116 cells by inhibiting proliferation and promoting apoptosis.

Currently, colorectal cancer (CRC) ranks third among men and second among women in the global malignant tumour incidence ranking.1 In China, CRC ranks fifth and fourth in the malignant tumour incidence ranking among men and women, respectively.2 Therefore, exploring an effective treatment for CRC has always been an important research topic in clinical medicine. Micro ribonucleic acid (miRNAs) regulate cell typespecific biological processes.3 Also, miR-425 is closely related to tumorigenesis. Liu et al.4 reported that interleukin-1b (IL-1b) induced the up-regulation of miR- 425 expression by activating nuclear factor kappa-lightchain- enhancer of activated B cells (NF-kB), which negatively regulate phosphatase and tensin homolog (PTEN), and thus leads to proliferation and inhibition of apoptosis in gastric cancer (GC) cells. While the overexpression of miR-425 has been found in GC tissues and cells, down-regulation of miR-425 induces apoptosis and autophagy via the mitochondrial pathway in human gastric cancer (BGC-803) cells.5 Peng et al.6 revealed that miR-425 was significantly over-expressed in human GC tissues compared to the adjacent tissues, and the inhibition of miR-425 in GC human gastric carcinoma-27 (HGC-27) cells reduced cell proliferation and migration. Liu et al.7 demonstrated that miR-425 over-expression promoted tumourigenesis in oesophageal squamous cell carcinoma (SCC) by targeting Sam- and Mad related proteins family member 2 (SMAD2). Although most studies have reported that miR-425 promotes tumourigenesis through several mechanisms, some studies have also shown that miR-425 can inhibit the occurrence and migration of tumour cells. For instance, Liu and Chen8 revealed that miR-425 targets transforming growth factor beta 1 (TGF-b1) and is a crucial suppressor of epithelial to mesenchymal transition as well as the development of triple-negative breast cancer through inhibition of the TGF-b1/SMAD3 signalling pathway. Similarly, Jiang et al.9 discovered that miR-425 regulates the proliferation and apoptosis of renal epithelial cells by regulating the programmed death-ligand 1 (PDL-1) pathway. Dysregulated expression of several miRNAs is associated with the carcinogenesis of CRC, such as miR-21,10,11 miR- 31,11miR-143,11,12 miR-145,11 and miR-142-3p/miR-506- 3p,13 although they may play different roles in the carcinogenesis of CRC. However, the role of miR-425 has been scarcely reported in the carcinogenesis of CRC. The current study was planned to assess the role of miR-425 in CRC carcinogenesis.

The experimental study was conducted from December 2016 to July 2017 at the Xinjiang Dingju Medical Laboratory, China. After approval from the medical ethics review committee of the First People's Hospital, Kashi, China, the study used sphere formation assay, woundhealing assay, transwell assay, thiazolyl blue tetrazolium bromide (MTT) cell proliferation assay, flow cytometric analysis, reverse-transcription quantitative PCR (RTqPCR), and western blotting (WB) to analyse the proliferation and invasion of HCT116 cells transfected with a miR-425 mimic cells, miR-425 inhibitor (I) cells, miR- 425 mimic negative control (NC) cells, and miR-425 inhibitor negative control (INC) cells. The CRC cell line HCT116 was purchased (Wuhan Procell Life Science & Technology Co., Ltd., China), and cultured in Dulbecco's Modified Eagle Medium (DMEM) high glucose medium (Biowest, France) containing 10% foetal bovine serum (FBS), 100 U/ml penicillin, and 100 U/ml streptomycin. It was maintained at 37°C in an atmosphere of saturated humidity with 5% carbon dioxide (CO2). The culture medium was changed once every day. A 1:1 (v/v) mixture of 0.02% ethylenediaminetetraacetic acid (EDTA)- 2 sodium (Na) and 0.25% trypsin was used for digestion, and subcultures were performed once every 3 days. The passage number of the HCT116 cells used for the experiments was between 5 and 10. With respect to sphere formation assay, the HCT116 cells were transfected with a miR-425 mimic, I, NC and INC cells in line with literature.14 After 48 hours of culture, the cells were digested, centrifuged and washed with 1 × Dulbecco's phosphate-buffered saline (DPBS) twice.15 Subsequently, 5,000 cells counted for each treatment were plated in each hole of a six-hole ultra-low attachment plate in conditioned medium consisting of serum-free DMEM F12 supplemented with 20ng/ml epidermal growth factor (EGF) (Life Technologies, United States), 10ng/ml basic fibroblast growth factor (bFGF) (Sigma, US), and 1/50 diluent B27. After one week of culture at 37°C, the spheres were counted under a phase contrast microscope. For wound-healing assay, 2×104 cells were inoculated in each well of a 96-well plate. The cells were starved for 24 hours before transfection. Subsequently, the cells were transfected with miR-425 mimic, I, NC and INC cells. Then the transfected cells were cultured in serum-free and antibiotic-free medium at 37°C for 24 hours. A wound was created by dragging the tip of a sterile pipette. A digital camera system was used to capture the images at 0 and 24 hours at 37°C. Each sample was analysed in triplicate. To observe cell migration and invasion abilities by transwell assay, after culturing the miR-425 mimic, I, NC and INC cells for 48 hours, the invading chambers were fixed with 10% neutral formalin fixative solution for 15min, then the invading chambers were washed twice with phosphate-buffered saline (PBS), followed by staining for 15min with freshly-prepared Giemsa staining solution. Finally, the cells were observed by taking photographs through a microscope. For MTT cell proliferation assay, the cells were collected and diluted into a solution of 1×106 cells once they had reached the logarithmic growth stage. The cells were then inoculated into 96-well plates at a density of 5×103 cells per 100μL per well. The cells were transfected with miR- 425 mimic, I, NC and INC cells. After 1, 2, 3, 4, and 5 days of transfection, the cells were treated with 20μL of 3-(4,5- dimethylthiazol-2-yl)-2, 5-diphenyl-tetrazolium bromide (MTT, 5mg/mL) for 4 hours and then solubilised in dimethyl sulfoxide (DMSO). The absorbance of cell suspensions was measured at 490nm by an enzyme spectrophotometer. Each sample was analysed in triplicate. To analyse apoptosis and the cell cycle by flow cytometric analysis, miR-425 mimic, I, NC and INC cells were collected and washed with PBS twice after 48 hours of culture, digested with trypsin for 1min followed by addition of DMEM containing 10% FBS. The cells were then transferred to 1.5ml centrifuge tubes, centrifuged, washed twice with PBS, and divided into two parts. One part was suspended with a binding buffer and stained using a fluorescein isothiocyanate (FITC)-conjugated Annexin V/ propidium iodide (Annexin V-FITC/PI) apoptosis detection kit (MKBio, China), followed by detection of apoptosis within an hour by a flow cytometer. The other part was fully fixed with 70% ethanol solution for 2 hours, and then the cell cycle was analysed by the flow cytometre. For RT-qPCR analysis, total RNA of HCT116 cells was extracted using Trizol reagent (Invitrogen, US). An iScript complementary deoxyribonucleic acid (cDNA) synthesis kit (Bio-Rad, US) was used to synthesise the single-stranded cDNA, and then the cDNA was used for RT-qPCR. b-actin gene was used as an internal control. The primers of RT-qPCR were miR-425F (5'-TCTACCGGTGTGCCCCTGACCCCCAGACA-3') and miR-425R (5'-TCTGAATTCAGCAGGGAA ACCCAGGGGCA- 3') for miR-425, and b-actinF (5'-CAGAGCAAGAGAGGCATCC- 3') and b-actinR (5'-CTGGGGTGTTGAAGGTC-3') for b-actin. In total, 20μL of the reaction buffer contained 10μL of 2 × EvaGreen qPCR MasterMix (Jingkang, China), 0.6μL of each primer (10μM), and 100ng of cDNA template. The reaction procedure of RT-qPCR consisted of pre-denaturation for 5min at 94°C, following by 35 cycles of 15s at 95°C, 1min at 60°C, and 1min at 72°C. Triplicate RT-qPCR amplifications for each sample were conducted on a Prism 7000 system (Applied Biosystems, US) and data was analysed using PRISM 7000 sequence detection software v1.0 (Applied Biosystems, US). Relative expressions of the genes were calculated by the comparative (2-rrCt) method.16 For Western blot (WB) analysis, the miR-425 mimic, I, NC and INC cells were collected after 48 hours of transfection, and total protein was extracted. Cell lysis, protein extraction, protein concentration detection, and WB analysis were done as described previously17,18 using rabbit antihuman programmed death-ligand 1 (PD-L1( (1:1000) monoclonal antibody (R&D Systems, US) with glyceraldehyde 3-phosphate dehydrogenase (GAPDH) (1:500; Chemicon) as an internal loading control. Data was recorded using Excel 2010 software and expressed as means ± standard error (SE). R software was employed for performing one-way analysis of variance (ANOVA) and Tukey-Kramer post-hoc test. P<0.05 was considered statistically significant. 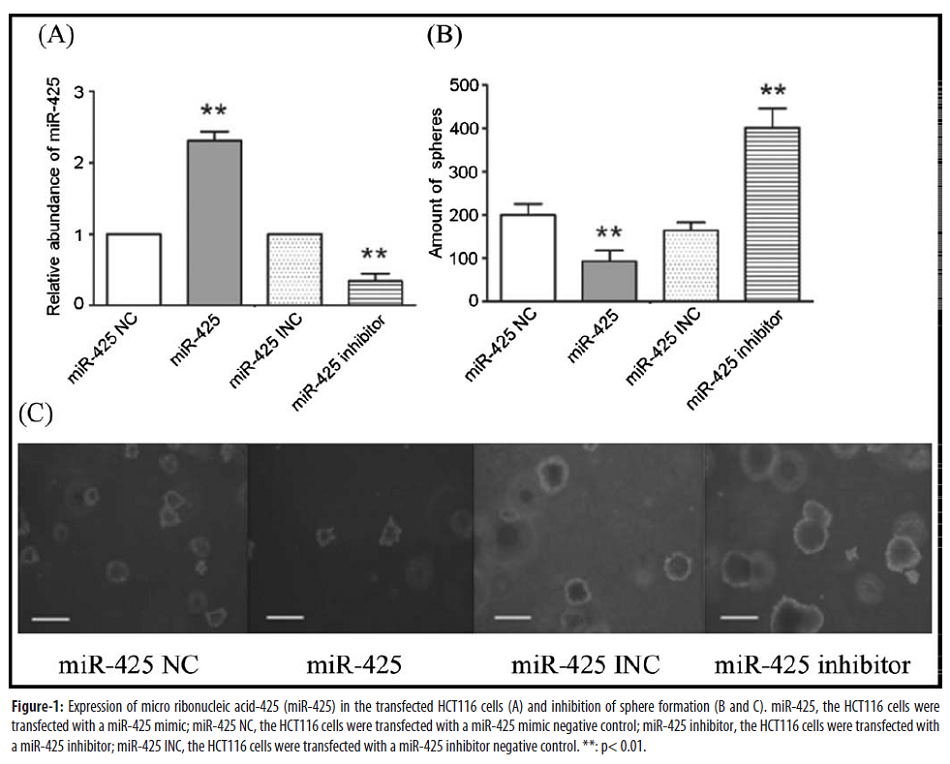 Therefore, the over-expression of miR-425 inhibited sphere formation in HCT116 cells. Over-expression of miR-425 inhibited the proliferation of HCT116 cells and induced apoptosis. MTT assay showed that the multiplication rate of miR-425 cells was significantly lower compared to NC cells (p<0.05). However, the multiplication rate of the I cells was significantly higher than the miR-425 INC cells (p<0.05) (Figure-2), 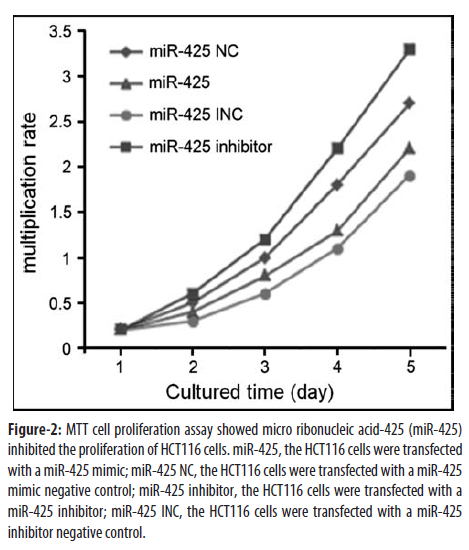 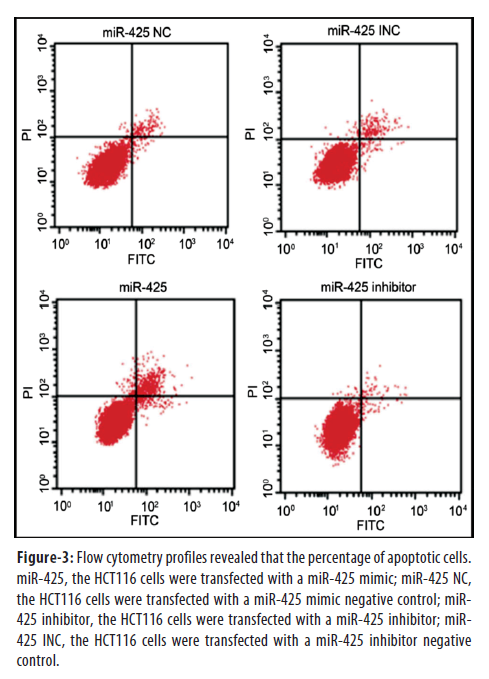 WB showed that expression of B-cell lymphoma 2 (Bcl-2) protein was reduced more obviously in miR-425 cells compared to the NC cells, but the expression of Bax and caspase-3 protein did not exhibit a significant difference (Figure-4). 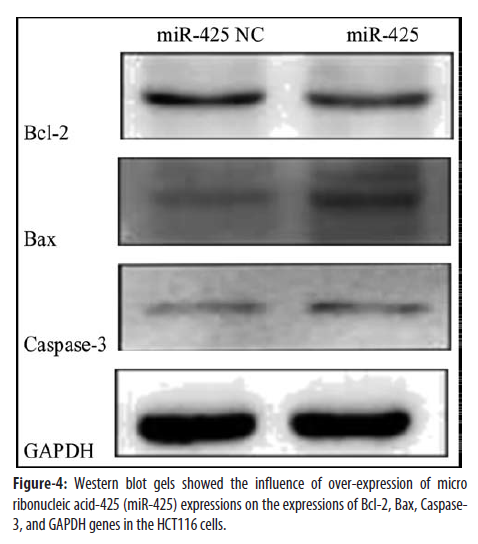 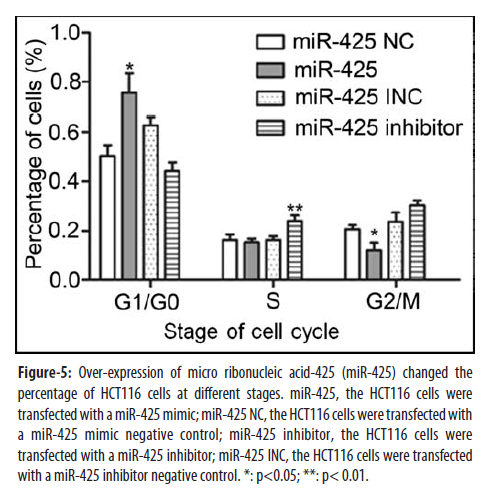 Furthermore, the number of cells in the S and G2/M phases among the miR-425 inhibitor cells was significantly higher compared to the other transfected cells, suggesting that miR-425 inhibits the transition of HCT116 from the G0/G1 phase to S phase of the cell cycle, and further entry into the S and G2/M phases for division and proliferation. The miR-425 over-expression reduced HCT116 cell migration and invasion. Wound-healing assay revealed that miR-425 cells had less migration than the NC cells, but the migration of I cells was significantly greater than INC cells (Figure-6A). On transwell assay, miR-425 cells were observed to be less invasive than NC cells, and the invasion capability of miR-425 I cells was significantly greater than that of miR-425 INC cells (Figure-6B). 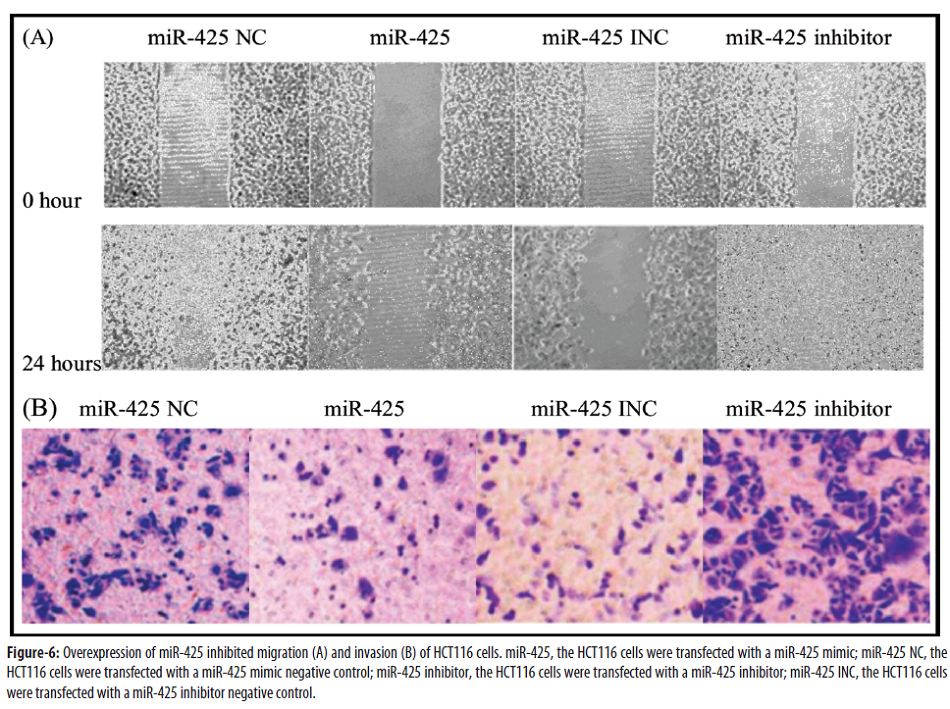 Considering the anti-apoptotic roles of Bcl-2, Bax and caspase-3,19 the findings of the current study suggest that the over-expression of miR-425 promotes apoptosis. Also, miR-425 over-expression was associated with inhibition of migration and invasion of HCT116 cells. Different miRNAs play different roles in the carcinogenesis of CRC through different regulatory pathways. For instance, miR-143 suppresses CRC cell growth through the inhibition of Kirsten rat sarcoma viral oncogene (KRAS) translation,12 while miR-21 promotes proliferation, migration and invasion of CRC as well as tumour growth by down-regulation of sec23a expression.10 It has been shown that the expression of miR-425 negatively correlates with the expression of PDL1.20 Given the significant correlation between the expression of PD-L1 and carcinogenesis,21-23 it has been postulated that miR-425 may inhibit the proliferation and migration of colon cancer cells by negative regulation of PD-L1. However, this inference needs further experimental verification.

Conflict of Interest: One of the authors is employed by Guangdong Meilikang Bio-Science Ltd., China.