Methods: The cross-sectional study was conducted at the Department of Psychiatry, Military Hospital, Rawalpindi, Pakistan, from January to July 2017, and comprised deliberate self harm and normal adults aged 18-25 years. Psychiatric evaluation involved a semi-structured interview based on mental status examination. The self-harm tendency was assessed on the basis of self-harm inventory of the fifth edition of the Diagnostic and Statistical Manual of Mental Disorders. Beck scale for suicide ideation and he depression anxiety and stress scale were also used for data collection. Data was analysed using SPSS 22.

Suicide attempts, suicide and self-harm are public health predicaments across the world.1 Deliberate self-harm (DSH) is the act of intentionally causing hurt to oneself, and suicide is the act of deliberately causing one's own fatality.2 Annually, approximately 800,000 individuals pass away due to suicide globally. The yearly global death rate in 2016 was roughly 11.2% or 100,000 human beings, with differences across age groups and countries.1 Suicide is considered the second-leading precursor of death in youngsters aged 10-19 years.3 Several studies demonstrated that -harm inclination fluctuates during the lifecycle.4 The World Health Organisation (WHO) in 2018 exposed that suicide attempts rates in youngsters aged 15-29 years were 3. 9 in 100,000 in 2016 and 4 in 100,000 in 2003.5,6 In 2011, out of 30,477 youngsters aged 14-17 years in six European states, 2.6% reported DSH incidents, and 3.2% mentioned multiple incidents in the same period.7 About 80% adolescents reported that they had not experienced feelings of DSH in the preceding year. Even though unusual, suicide in youngsters is a terrible outcome that should be vigorously worked against.8 Young adulthood and adolescence is a phase at risk for both DSH and suicide attempts4 and, consequently, the capacity to identify self-harming adults at risk of suicide is progressively more imperative.9 Self-harm behaviour and suicide are heterogeneous concepts in cultures or societies with different terminologies all over the world.10-12 A previous study defined concept of non-suicidal selfinjury (NSI) and depicts a deliberate tendency, but this concept is not socially recognised globally.13 For example, tattoos and piercings is a sign of fashion and are considered taboo in different countries. However, many scholars believe that it leads to injury or destruction of body tissue with no major physical harm.13 These DSM-5 explanations focus on the premeditated nature of the act in order to lessen psychological problems and highlight the intentional and non-suicidal aim based on intentionality. Several studies commonly used terminologies related to DSH that help explain this concept.9 For instance, self-injury considered NSI, and distinguishing from oneself to brutal circumstances including ingesting drugs and trichotillomania. Conversely, the concept of DSH includes NSI inclinations and deliberate drug overdoses. This concept was proposed to designate deliberate, non-socially acceptable behaviours, and self-directed actions aimed at causing impairment or destruction of the body, executed without or with deliberate suicidal attempt. Additionally, DSH is the expression applied in studies conducted in Pakistan to prevent suicidal thoughts.13 On the other hand, studies have disputed that DSH behaviours could be assumed as a protective aspect related to suicidal attempt,9,14 arguing that DSH behaviour was permitting disparaging impulses into a constrained area, and individuals create false belief of control over fatality. In actual fact, youngsters reporting DSH is one of most protective factors to tackle suicidal ideation.15,16 Conversely, studies reported DSH had a deleterious factor for enhancing psychological problems, including suicidal behaviour or ideation, depression, borderline personality disorder and mood swings.17,18 Studies also revealed that both DSH or suicidal behaviour were considered and shared the same risk factors for developing psychiatric co-morbidities as well as environmental factors, like family conflicts, physical violence and history of sexual abuse.18-22 Prevalence of DSH is the most vital influencing factor for the development of suicide and suicidal attempt.5,7 Several investigations have revealed that young people with DSH reported higher levels of stress, anxiety and depression.16-23 There are many aetiological approaches that try to comprehend the negative circle of suicidal behaviours in adolescents. According to Linehan's approach, suicidal behaviours strive to tackle severe emotional responses.15 The current study was planned to identify the association among suicidal ideation, DSH behaviour and psychopathological distress in clinical and non-clinical populations.

The cross-sectional study was conducted at the Department of Psychiatry, Military Hospital, Rawalpindi, Pakistan, from January to July 2017. After approval from the institutional ethics review committee (ERC) and the ERC of Foundation University, Rawalpindi Campus, the sample was raised using purposive sampling technique from among students either gender aged 18-25 years studying at the Army Medical College (AMC) and other colleges in the city. Those included were individuals diagnosed to have DSH behaviour after a thorough examination by professional psychiatrists using literature23 as the guide according to which DSH includes banging / hitting self, biting, burning, carving, cutting, wound-picking, needle-sticking, pinching, hair-pulling, rubbing skin against rough surfaces, severe scratching, and swallowing chemical. Those who met the criterion were enrolled as DSH adults, while those who did not meet the criterion were taken as normal adults. In both clinical (DSH) and non-clinical (Normal) groups, those with any history of psychological problems were excluded. After taking written informed consent from each individual, psychiatric evaluation was done which comprised a semi-structured interview based on the Mental Status Examination (MSE) using DSM-5.23 Also used were the Inventory of Statements about Self-harm (ISAS), the 42-item Depression Anxiety and Stress Scale (DASS42) and the Beck Scale for Suicide Ideation (BSSI). ISAS has two sections.23 The 39-item first section assesses lifetime frequency of 12 NSI behaviours performed intentionally and without suicidal intent. Those endorsing one or more NSI behaviours were instructed to complete the second section which assesses 13 functions, like affect-regulation, anti-dissociation, anti-suicide, autonomy, interpersonal boundaries, interpersonal influence, marking distress, peer-bonding, self-care, selfpunishment, revenge, sensation-seeking, and toughness. Each function is assessed by three items, rated as 0 = not relevant, 1 =somewhat relevant, and 2 = very relevant, with total score ranging from 0 to 6.23 DASS42 has three extensive subscales to measure symptoms of stress, anxiety and depression.24 The participants were asked to use a 4-point scale in order to find out the different states they had experienced over the preceding one week. The scores were summed up to measure the symptoms of each emotional state and physical arousal For the purpose of the scale, 0 = did not apply to me at all, and 3 = applied to me very much, or most of the time. The internal reliability of the translated version is a=0.83 for overall DASS and for subscales it is 0.63 for Depression, 0.60 for Anxiety, and 0.60 for Stress.24 The 19-item BSSI is a routine screening tool for existent suicidal thinking, showing good internal consistencies in various settings.25 The screening was done by two independent experts; a psychologist and a psychiatrist. Data was analysed using SPSS 22. Pearson product correlation method was employed to determine the association among depression, anxiety, stress, DSH behaviour and suicidal ideation. Independent sample t-test was used to find differences between normal adults and DSH adults on suicidal ideation, depression, anxiety and stress. Structural Equation Modelling (SEM-22) software was used to examine the mediating role of DSH behaviour among suicidal ideation, anxiety, stress and depression. Stress depression and anxiety were independent variables, while suicidal ideation was the dependent variables, with DSH behaviour being the mediator variable. P<0.05 was considered statistically significant. 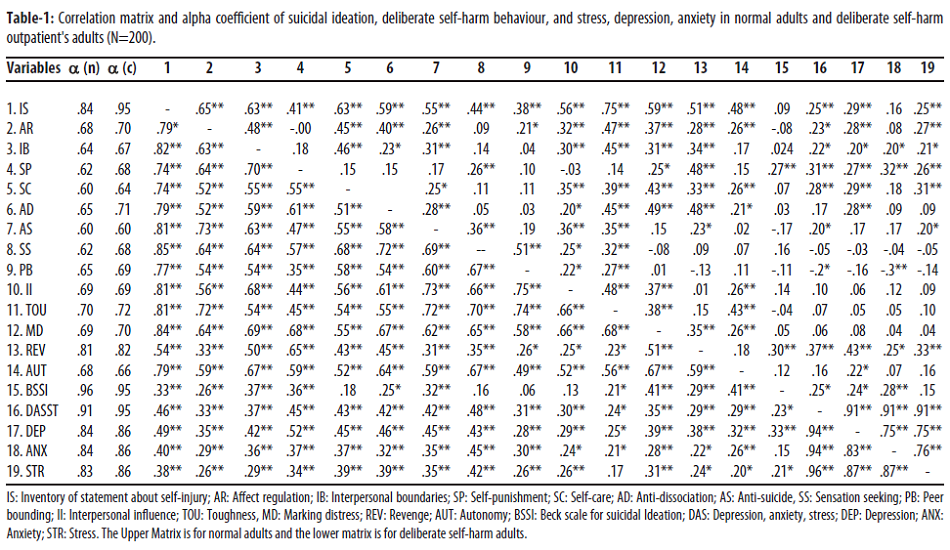 Normal adults had higher level of mental health problems compared to DSH adults, while adults with DSH tendency were more inclined towards suicidal ideation compared to the Normal group (Table-2).

The mediating effect of DSH in the relationship to suicidal ideation, depression, stress and anxiety in both the groups was also assessed (Table-3).

The findings revealed that DSH was statistically positively associated with suicidal ideation and mental health problems, including depression, anxiety and stress, in DSH adults. In contrast, DSH tendency was statistically positively associated with mental health problems, such as anxiety, stress and depression in normal adults. These and all other findings of the current study are in line with literature.2,7 Moreover, previous studies found suicidal ideation to be linked with psychological problems, like anxiety and depression, in DSH and normal adults with suicidal ideation being more associated with DSH patients.11 It was also noted that adults with DSH tendency had less stress and anxiety, which, again, was in line with earlier studies.11,14 The current study's findings highlighted that DSH was one of the crucial factors for the enhancement of suicidal ideation. Previous studies have demonstrated that there was significant association among DSH, depression, stress, anxiety and suicidal ideation.3,11 Apart from other implications, the current study would be helpful to assess potential candidates applying for armed forces as DSH behaviour was found to be common in bth normal and DSH adults.2,13 One of the major limitations of the present study was its cross-sectional design. In order to explain the duration and causes in the development of depression, anxiety, suicidal ideation due to DSH, a longitudinal study is essential. Also, there was unequal self-harm behaviour reported by DSH adults. Uniform behaviour can draw a clear image of DSH transitioning towards psychological problems and suicidal intent. Therefore, it is suggested that future researches should employ a criterion to rate self-harm behaviour from severe to minor.

The findings support the broad depression and attempted suicide theory, suggesting that depression, anxiety and stress are associated with suicidal ideation among DSH adults.

Disclaimer: The text is based on an MS thesis project.