Objective: To determine the prevalence of myofascial trigger points in the shoulder and neck region, and to assess association with depression, anxiety and stress.

Method: The cross-sectional study was conducted from January to September 2019 at Riphah International University, Faisalabad, Pakistan, and comprised students from different universities in Faisalabad. Myofascial trigger points were identified among the subjects using palpation method by a therapist. Depression anxiety stress scale was used to determine the level of depression, anxiety and stress. Data was analysed using SPSS 20.

Conclusion: Myofascial trigger points were quite common among university students and were associated with depression, anxiety and stress.

Neck and shoulder pain are among the most common complaints related to the musculoskeletal system, which lead to disturbances in daily activities, reduced efficiency and reduced productivity. In New Zealand, shoulder and neck pain are the 3rd and 4th most common musculoskeletal disorders respectively. Myofascial trigger points (MTrPs) are one of the common causes of neck and shoulder pain.1 It has been proved that adolescents having some sort of psychological disorder may experience neck and shoulder pain that exacerbate due to stress that they take because of study and academic stress. Students owing to their tough, frenetic study schedule and study pressure have high chances of developing depression, anxiety and stress.2 Health concerns, such as neck, shoulder and back pain, primarily reduce students' attention to focus on their studies.3 MTrPs are the palpable taut band in skeletal muscles over sensitive points of body which on palpation cause pain in associated or nearby areas, often painful on pressure and may cause involuntary changes occasionally.2,4 In 1942, Travell and Simons were the first authors who narrated the myofascial pain syndrome (MPS); they reported that this painful state is owing to the existence of MTrPs.5,6 MTrPs are classified as active or latent. Active MTrps cause pain all the time or while moving and can reduce muscle flexibility, while latent MTrPs could be identified by solely applying overpressure that evokes pain. A sudden jerky movement "jump sign" occurs when finger is moved over the node or strand in direction opposite to that of muscles fibres, also known as "twitch response".7 The prevalence of musculoskeletal pain, known as myofascial pain, is reported to be 37% in males and 65% in females.7 Exacerbating factor of this condition may be sustained perennial contractions, such as lifting heavy weights, maintaining a posture for long period of time like in sleeping, or vulnerability to cold moist weather contamination and psychological distress. There is still ambiguity in finding the clear cause or mechanism of TrPs. Recent studies proved a complex aetiology including inheritance, physical and psychological components. Moreover, life span psychosocial stressors showed up to be concerned with the beginning and advancement of MPS.8 Patients suffering from MPS more often have psychological stressors. Additionally, studies show that a noteworthy percentage of MPS patients experience various types of mental trouble.9 Psychological factors have been incriminated with the susceptibility, commencement and preservation of persisting chronic pain.10 However, chronic myofascial pain itself cannot be considered a mental disorder, but it may be related to some sort of psychological disturbance.11 According to several studies, the occurrence of depression, anxiety and stress have been tremendously increased among adults in developing countries.12 Rizvi et. al.13 did a survey to find the prevalence of depression, anxiety and stress among medical students in Islamabad, and concluded that there was increased prevalence of anxiety, followed by stress and then depression, and that there was 70.4% prevalence of anxiety, 50% of stress and 40.9% prevalence of depression among medical students. Moreover, Fishbain et al.14 stated that psychological disorders, like depression and anxiety, were most probably seen in patients having chronic pain and mostly in patients identified with MPS. Research has shown increased level of depression, anxiety and stress in MPS patients.14 So, in dealing with patients having musculoskeletal pain, depression, anxiety and psychological stress should not be ignored. In patients with musculoskeletal pain, psychological stressors, such as pressure of academic work and university requirements, may produce greater influence on depression than that of anxiety.15 Psychological and pathological characteristics and their association with pain have been widely studied among clinical papulation, but, to the best of our knowledge, no such study has been conducted in Pakistani population. The current study was planned to fill the gap by finding the association of depression, anxiety and stress with MTrPs among university students.

The cross-sectional study was conducted from January to September 2019 at Riphah International University, Faisalabad, Pakistan. After getting approval from the institutional ethics review committee, the sample was raised using convenience sampling techniques from among students of either gender aged 18-25 years from different private and government universities in Faisalabad. The sample size was calculated using online Epi Tools software.16 Those excluded were subjects suffering from medical illnesses or diseases, such as red flag like neoplasm, presence of neurological or neuromuscular disorders or diagnosis of fibromyalgia syndrome or cervical radiculopathy or myelopathy, migraine, joint pathology and previous history of a whiplash injury or cervical spine surgery or family history of psychopathology, and so were those who presented with neuromuscular disorders or any systemic Illness, lime rheumatism, referred pain or degenerative disorders and traumatic history. After taking informed consent, MTrPs were checked by palpation and a short clinical interview lasting 5 minutes was conducted with every individual to screen out depression, anxiety and stress before handing out the 42- item depression anxiety stress scale (DASS42) questionnaire for data collection. DASS42 consists of 14 questions each about depression, anxiety and stress.16 It is a valid and reliable tool with reported values for test-retest and split-half reliability coefficients being 0.99 and 0.96, respectively, to determine the extent of depression, anxiety and stress in student population.17 The diagnostic criteria include 5 items to identify active MTrPs, including the presence of a palpable tensioned band in a skeletal muscle; the presence of an oversensitive tender spot in the tight ligament; local twitching response that elicits palpation of the tensioned ligament; reproduction of the typical referred pain on compression; and spontaneous presence of the typical pain pattern and / or recognition of the patient as known. If 4 out of the above-mentioned 5 points are met, MTrPs are considered latent.7 The neck and shoulder region of the participants were examined by palpation with thumb to determine whether MTrPs were present by a manual therapist with more than 10 years of experience. Recent studies confirmed that MTrPs can be reliably identified using palpation method.18,19 Data was analysed using SPSS 24. Independent samples ttest was used to compare present and absent TrPs regarding depression, anxiety and stress. P<0.05 was considered significant. 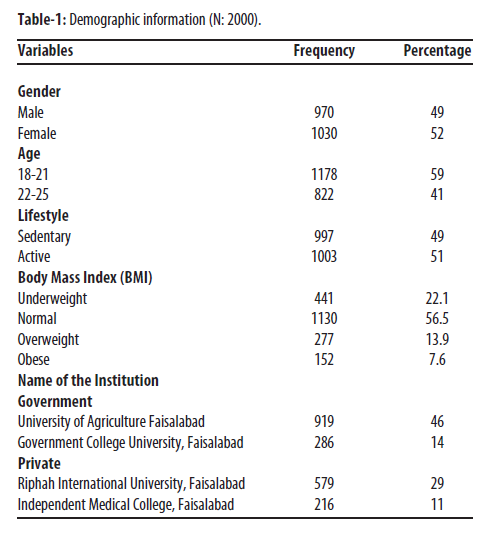 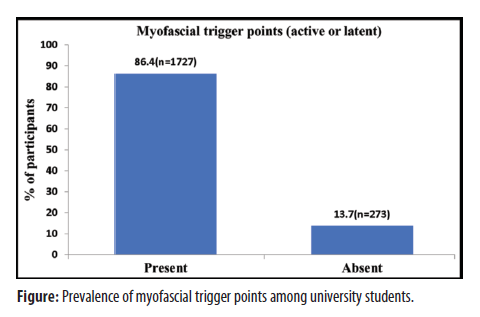 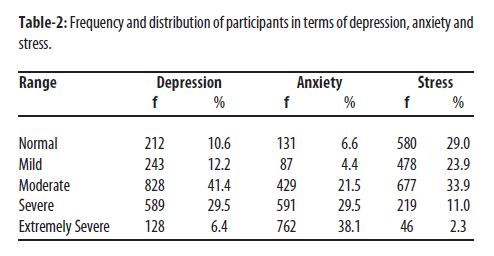 The current study examined the presence of active and latent MTrPs in the neck and shoulder area of university students who had not previously been diagnosed with MPS. The study showed that there is an association of MTrPs with depression, anxiety and stress, which is in line with earlier studies.15,20,21 A study20 showed that the number of active TrPs had a weak association with anxiety. Another study reported that patients with MTrPs had a high level of stress.21 Likewise, a study comprising war veterans with depression and post-traumatic stress disorder showed that those with MPS had increased levels of depression.22 One study concluded that those with higher stress levels reported more trigger points with more pain.23 The current study has limitations as only the neck and shoulder areas were evaluated to identify MTrPs. Besides, the sample comprised university students from only one city. In addition, the association of depression, anxiety and stress with active and latent MTrPs was not investigated separately. Further studies are needed to eliminate these limitations. On the basis of the findings, it is recommended that students shall be educated about psychological problems associated with MTrPs and how to deal with these issues

MTrps were common among the students and were associated with depression, anxiety and stress.

22. Vidaković B, Uljanić I, Perić B, Grgurević J, Sonicki Z. Myofascial pain of the head and neck among Croatian war veterans treated for depression and posttraumatic stress disorder. Psychiatr Danub. 2016; 28:73-6.