Objective: To analyse the correlation of dietary factors with haemoglobin concentration and body mass index.

Methods: This cross-sectional study was conducted in Shaheed Benazirabad district of the Sindh province in Pakistan from September 2015 to April 2016, and comprised students randomly selected from government schools. Data concerning dietary intake, such as meat, milk, egg and fruits, was noted. Baseline data was compared with haemoglobin and serum ferritin levels. Data was analysed using SPSS 20.

Results: There were 1686 subjects aged 11-18 years; 946(56%) boys and 740(44%) girls. Dietary factors, such as meat, egg and fruits, showed significant association with haemoglobin, serum ferritin levels as well as with Body Mass Index and monthly household income (p<0.05). However, milk consumption had non-significant association with haemoglobin (9p>0.05).

Conclusion: Iron status in blood was found to be significantly affected by dietary intake, such as meat, milk, fruits and eggs.

Deficiency of micronutrients has markedly raised many health issues worldwide.1 Iron is commonly deficient in diet, especially in industrial areas, increasing the risk of anaemia. High rate of morbidity and mortality is linked with severe anaemia in children in Africa.2 Cognitive impairment, decreased productivity and even death can be a result of severe iron deficiency in developed countries.3 The link between reduced levels of haemoglobin (Hb) and nutrient deficiency was strongly acknowledged amongst college students in Ludhiana, India.4 Increased iron deficiency anaemia (IDA) and low Hb in children can be because of several factors, such as poor financial position, reduced intake of iron-rich food and inheritance. In developing countries, like Pakistan, iron deficiency is the most common of all nutritional deficiencies. Children consuming junk food have low Hb, serum ferritin (SF) and body weight.5 Poor crop development also limits access to sources of iron intake in Pakistan. Low heme proteins in diet and high phytate content of wheat flour are two of the dietary factors accountable for IDA in our country.6 The current study was planned to analyse the correlation of dietary factors with Hb concentration and body mass index (BMI) in school-going children.

This cross-sectional study was conducted in Shaheed Benazirabad district of the Sindh province in Pakistan from September 2015 to April 2016. After approval from the ethics review committee of the Peoples University of Medical and Health Sciences, Nawabshah, Pakistan, the sample size was calculated using Raosoft at 95% confidence level and with 2.385% margin of error which was reduced to increase validity of the findings.7 The sample was selected randomly from among students of government institutions belonging to either gender aged 11-18 years from the rural and urban areas of Sakrand, Nawabshah, Kazi Ahmed and Daur talukas. Those with history of blood disorders, other clinical manifestations and any extensive surgery were excluded, and so were those who were dumb or deaf or unable to communicate properly. After taking consent, data was collected using a questionnaire exploring education, social class, age, gender and dietary habits. Students were divided into three groups using the World Health Organisation (WHO) criterion; from 11 years to 13 years and 9 months, from 14 years to 16 years and 9 months, and from 17 years to 18 years.8 The monthly income of parents were divided into three categories using the Water/Sanitation, Assets, Maternal Education and Income (WAMI) index, as: income 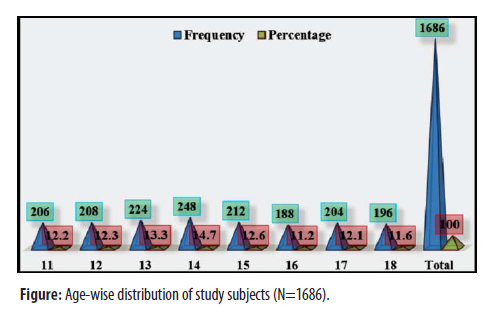 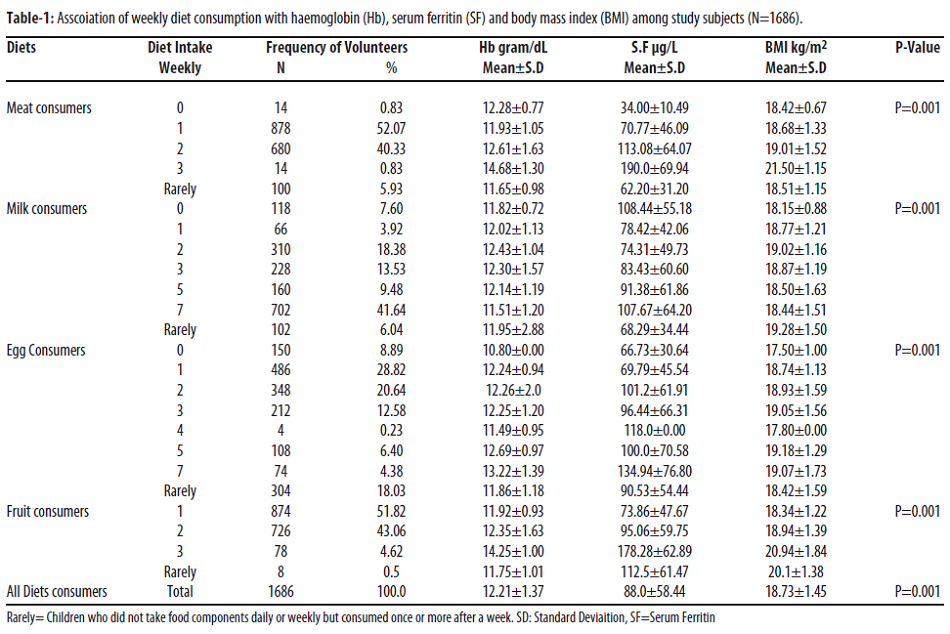 Hb, SF and BMI values were higher in subjects aged 17-19 years compared to the other groups (Table-2).

There was a strong correlation of Hb, SF and BMI values with the consumption of egg, meat, fruit and household income, while daily milk consumption had a negative correlation with Hb (Table-3).

The current study is the first such survey done among the students of Shaheed Benazirabad in the Sindh province of Pakistan. Earlier studies showed relationship between Hb deficiency and low intake of meat per week.11 Since meat is invariably cooked before it is eaten, little nutritional significance can be attached to the inhibition of Hb absorption. A study done in Gaza showed 12% students aged 12-18 years had meat on a daily basis.12 Some studies showed SF having a weak positive correlation with meat intake. The data for positive correlation between meat and vegetable with health status is complex to figure out.13 The current study found a significant positive correlation of Hb, SF and BMI with meat intake. In the current study, a regular habit of taking cow's milk on a daily basis was found to be prevalent in the rural population. A relation was found between weekly intake of milk with Hb and BMI. Also, milk intake was associated with iron status, Hb, SF and BMI. An earlier study showed a negative relation between SF and intake of eggs, while other studies found no relationship between iron statuses and egg intake.9,14,15 In the current study, egg was significantly associated with Hb, SF BMI and household income. The current study also found that iron absorption was highly affected by fruit and vegetable consumption. Other studies, however, reported no relation between fruit intake and SF level.16-18 In view of the findings, it is suggested that the doctors should take into account the need for protein-rich and balanced diet for subjects of all age groups. Also, Hb and SF should be considered vital diagnostic tools in anaemic patients. Further large-scale studies are needed to support the findings of the present study.

Iron status in blood was found to be significantly affected by dietary intake, such as meat, milk, fruits and eggs.