Objective: To determine the effects of Wii Fit exer-gaming on balance confidence, quality of life and fall risk in elderly population.

Method: The double-blind randomised control trial was conducted at Kulsum International Hospital, Islamabad, Pakistan, from July 31 to October 30, 2018, and comprised vitally stable, physically independent subjects of either gender aged 60 years and above, having no serious systemic disease. The subjects were randomly allocated into experimental group A and control group B using the concealed envelope method. After baseline assessment, group A received Wii fit gaming, while group B received balance training for 30 minutes twice a week for 8 weeks. Activities balance confidence (ABC), European Quality of Life-5 Dimensions (EQ 5D-5L), timed up and go (TUG) and Fukuda were used to assess the impact of the intervention. Data was analysed using SPSS 21.

Conclusion: Wii fit was found to have the potential to improve balance confidence and quality of life, reducing the fall risk among the elderly.

Elderly population, constituting individuals >65 years of age, is expected to be double in number by 2025 in several countries in Asia, including Pakistan.1 Despite the advancement in healthcare, which has led to this increasing lifespan, the dependency is also exacerbating with increasing age which is associated with general perceptual abilities, including visual and hearing changes as well as a decline in the ability to think, remember and reason.2 This is paralleled with a significant decline in muscle strength and motor control due to changes in the motor cortex, accompanied by difficulty to activate skeletal muscles voluntarily which is important to uphold posture in order to keep balance in addition to maintaining muscle tone and coordinate movements of skeletal muscles to keep the centre of gravity within the base of support.3 One-third of the older population has a chance of losing balance at least once a year due to inability to attain, maintain or regain a state of balance during any posture or activity. The combined progressive loss of visual, proprioceptive and somatosensory inputs results in reduction in adaptive strategies for orientation and balance which negatively influence the quality of life (QOL) in the elderly. Several interventions for reducing fall rate have been studied, including balance and gait training, use of appropriate footwear and walking aids to improve mobility as well as working on muscle strength and endurance. However, all these strategies were reported to be often poorly adhered to. Contrary to the conventional exercise programmes, Exer-games in healthy elderly have shown to not only improve balance by focussing on movements, but also on the outcome of the movements used in the games which reflects upon activities of daily life (ADLs).1-3 Virtual reality (VR) training involves interaction with a computer-generated scenario for which the gaming industry has introduced various affordable and accessible systems, such as Wii Fit. It includes a balance board that detects the player's body movements and converts it into a certain action in the game providing a visual feedback to the player in real time. Several studies have reported that Wii Fit training can produce favourable effects in terms of balance, functional activities and QOL in general in the elderly population.4,5 Wii Fit is one of the best active video games that increases physical activity and energy expenditure along with being cost-effective. It has been found to be enjoyable by the participants of all ages, including the elderly.6,7 It has also been found feasible to use and immediate effects have been noticed on balance and strength.4 The current study was planned to establish the effects of VR-based Wii Fit exercise on improving sensory integration, ability and muscle control in order to reduce risk of falls and to improve QOL in the elderly population.

The double-blind randomised control trial (RCT) was conducted at Kulsum International Hospital, Islamabad, Pakistan, from July 31 to October 30, 2018. It was registered with the Iranian Registry of Clinical Trials (IRCT20180417039344N1).8 After approval from the institutional ethics review committee, the sample size was estimated using an online calculator (ClinCalc.com)9 with power 0.80, alpha level 0.05 and mean values taken from matching literature.10 Those included were vitally stable, physically independent with age 60 years and above having no serious systemic disease. Vitals and physical independence were assessed at the study setting. Detailed history was taken and previous medical record was assessed for serious systemic illnesses in each subject. Subjects with neurological conditions were excluded. After taking written informed consent from the subjects, they were randomly divided by concealed envelope method into equal experimental group A and control group B. The first participant who fulfilled the criteria was asked to choose one of the two envelops with concealed group names. The subject was assigned to the group he/she chose while the next participant was automatically assigned to the other group. The participants were kept blinded to their assigned groups. Baseline assessment was done by using activity balance confidence (ABC), timed up and go (TUG), Fukuda and European Quality of Life-5 Dimensions (EQ-5D-5L) tools. ABC quantified the self-perceived level of confidence in the elderly while performing specific activities without becoming unsteady and losing balance.11 TUG is a sensitive and specific measure for identifying older adults who are at risk for falls.12 Fukuda assessed individuals for peripheral vestibular dysfunction or balance instability requiring participants to step on the spot with arms outstretched.13 EQ-5D-5L is a self-reported measure of current health status consisting of five dimensions i.e. Mobility, Self-Care, Usual Activities, Pain/Discomfort, and Anxiety/Depression.14 Detailed history was also taken from the participants about their medical conditions and surgical history. Participants of both groups were instructed to perform warm-up exercises for 15 minutes prior to each exercise session. The experimental group A, after due briefing and instructions, indulged in gaming via Wii fit (Nintendo Co., Ltd.) for 30 minutes twice a week which included basic step, basic run, soccer heading, table tilt, balance bubble and lotus focus. The control group B received conventional balance training exercises for 30 minutes twice a week that included single-leg stand up, tandem walking, tip-toe walk, walk on heels, sideways walk, walking with high steps and contra-lateral arm raise. Both interventions were provided for 8 weeks. Close supervision was ensured in a safe environment while providing the interventions to the subjects of both the groups. A therapist was there with each subject during all the sessions and the floor was carpeted to ensure slip-free surface. The subjects were instructed to inform the therapist if they were having any discomfort, feeling dizzy etc. The participants were reminded via telephone calls about their session dates and timings to ensure compliance. The subjects were asked to share their medication and activity details with the therapist prior to every session to look for the confounders. It was made sure that there was no contact or communication between the subjects to avoid the competition or Hawthorne effect which denotes any possible change in behaviour as a response to observation and assessment.15 Post-intervention ABC, EQ-5D-5L, TUG and Fukuda were used as the outcome measures. The outcome assessor was kept blinded to the two groupings. Data was analysed using SPSS 21. Independent sample test was used for inter-groups and paired sample for intragroup analyses. 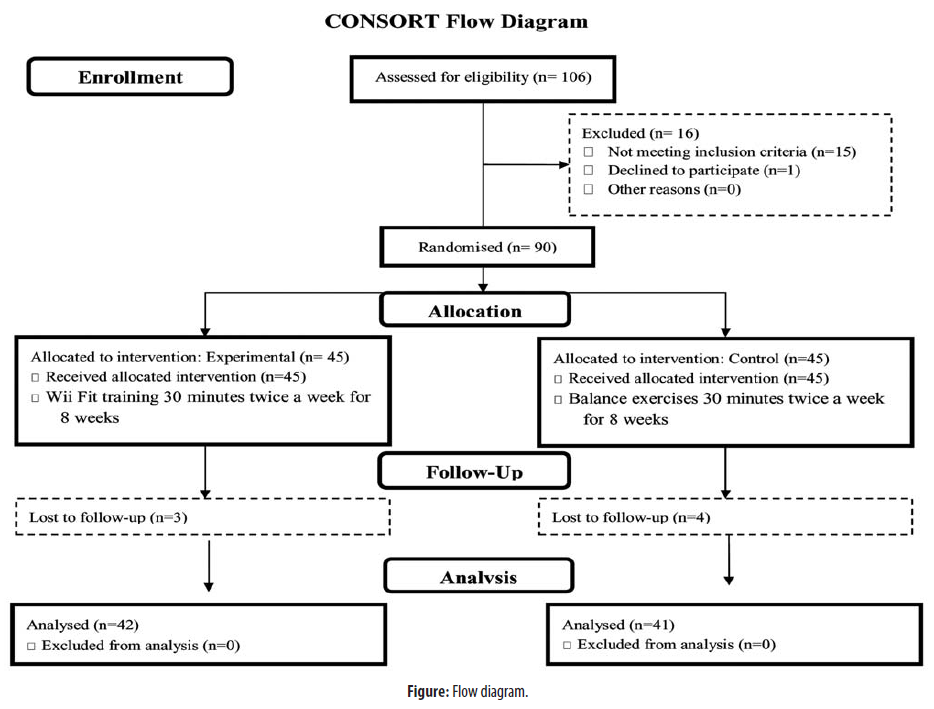 Medical conditions, addictions and allergies of the entire sample were noted (Table-1). 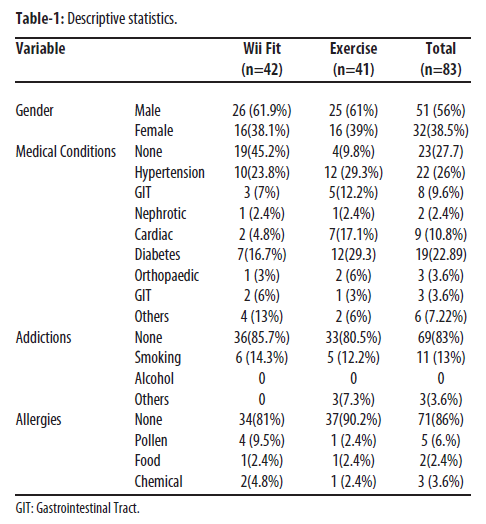 Balance confidence improved in both groups, but it was significantly higher in group A (p<0.001). Mobility, selfcare, usual activities, pain/discomfort, anxiety/depression as well as TUG and Fukuda showed significantly more improvement in group A compared to group B (p<0.05) (Tables-2, 3). 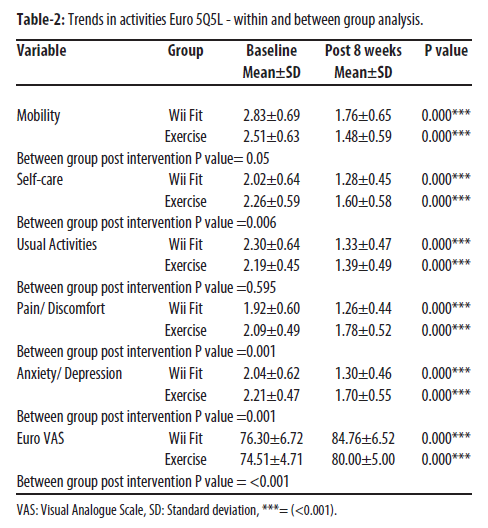 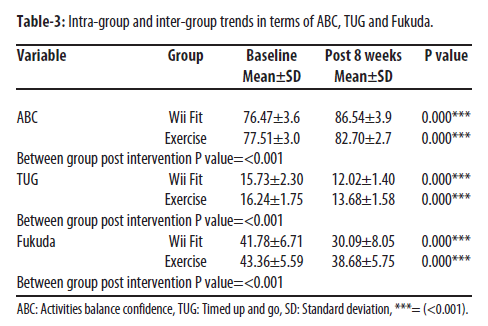 Findings suggested that VR-based Wii Fit exercises were as effective as conventional exercise programmes in improving ADLs in elderly individuals. However, a significant improvement was observed in all components of QOL in the experimental group, including reduction in pain and discomfort, increased mobility, better self-care and overall improved emotional status. This was accompanied with a significant increase in confidence and reduced risk of falls in the experimental group. The current findings are parallel to an earlier RCT.10 A systematic review of several RCTs using Wii console concluded that Wii-based exercise programmes may serve as a substitute for other forms of balance training aimed at reducing risk of falls.16 The current study also supports the positive influence of VR-based Wii Fit exercises on functional performance in independently functioning older adults. A study demonstrated positive changes in balance and mobility measures which are in line with the current study.17 A study showed greater improvement in confidence of older adults by the end of the study while performing tasks for the interventional group relative to the control group.18 The results are similar to the findings of the current study. A RCT concluded no significant changes in the depression scale in either group.17 Contrarily, in the current study, there was improvement in terms of depression and anxiety in both the groups, with a significant improvement in the experimental group. The participants in the interventional group were more engaged with interactive games which may have led to improved wellbeing. Similar results were reported by a quasiexperimental study.19 The participants in the experimental group preferred the use of Wii Fit in future for their balance issues, and literature also supports the finding,20 although one study suggested contrasting findings.21 It was perhaps because the said study comprised geriatric population involved in virtual programmes that were being delivered online. One study conducted locally on diabetic elderly population showed non-significant improvement in pain/discomfort in both the groups following treatment protocols similar to the current study.22 The current study has limitations. The calculated sample size was 50 subjects in each group, but, given resource and time constraints, 45 individuals were recruited and there were further dropouts. The majority of participants were educated with mild to moderate balance impairment. It is unlikely for the sample to represent the entire spectrum of the older population. It was tried to minimise the effects of confounders although the factor of enjoyment while playing the game which could keep the subjects more engaged during the session could also be an element for improved results in the experimental group. Potential Wii Fit users from a more diverse socioeconomic background with a broader range of balance impairments need to be included. Majority of the population in Pakistan is unaware of the role of exergaming in improving QOL in geriatric population, thus the participation rate and follow-up of patients was a challenging task. It is recommended that studies on a larger scale should be conducted.

Wii Fit gaming was found to have the potential to improve balance confidence, QOL and to reduce fall risk among the elderly population.