Objective: To determine the effect of kangaroo mother care applied to the healthy newborns in the early postpartum period on breastfeeding.

Methods: The randomised controlled experimental study was conducted from June 1 to August 25, 2016, at a training and research hospital in Istanbul, Turkey, and comprised healthy newborns and their mothers equally divided into study group A and control group B. The newborns in group A were administered kangaroo mother care for 3 hours after birth, while group B newborns were cared for using the unit's standard postpartum procedure. The time the newborns in both the groups first started to breastfeed, the frequency of breastfeeding within the first 24 hours, the duration of their breastfeeding and suckling skills were evaluated. Data was analysed using the Number Cruncher Statistical System 2007.

Results: There were 112 sets of newborns and their mothers; 56(50%) in each of the two groups. Group A newborns started suckling at the breast sooner, for longer duration, and more frequently compared to the newborns in group B (p<0.05). There was no difference between the groups in terms of initial suckling skills (p= 0.862), but those in group A were better at suckling 24 hours later (p=0.001).

Conclusion: Kangaroo mother care administered to healthy newborns immediately after birth encouraged the newborns to take to the breast sooner, more frequently, and for longer periods. It also increased their suckling skills.

It is known that breastfeeding in the first one hour of life protects newborns against fatalities arising from infection, sepsis, pneumonia, diarrhoea and hypothermia.1 Because of this, the World Health Organisation (WHO) and the United Nations International Children's Emergency Fund (UNICEF) recommend the initiation of breastfeeding in the first hour after delivery, as well as exclusive breastfeeding for the first 6 months, to be continued with the addition of supplementary foods until the age of 2 years.2 In spite of this, however, it is reported around the world that breastfeeding rates are not at the desired levels and that there are problems both in initiating and maintaining breastfeeding.2 Studies show that hospital routines interrupting contact between the mother and the infant have an adverse impact on breastfeeding.3,4 Also, studies5-7 have shown that newborns provided Kangaroo mother care (KMC) early after delivery have better success at breastfeeding and achieve this success sooner. For this reason, the WHO recommends placing newborns on their mother's chest for skin-to-skin care immediately after birth and maintaining this posture at least until the first successful breastfeeding occurs.2 Although postpartum skin-to-skin contact is widely implemented around the world, it is not a practice included in routine postpartum care in Turkey. This delays the bonding between the mother and the child and also the initiation of breastfeeding.3 Only 50% of infants in Turkey are breastfed in the first one hour after delivery and 30% are not even breastfed in the first 24 hours after birth.8 A study3 in a baby-friendly hospital in Turkey found that newborns were exposed to their mothers on an average at Minute 69 and that the first breastfeeding takes place on an average at Minute 78. Research findings demonstrate that some factors, such as the baby's physical examination and admitting the infant into the nursery for routine care, cause a delay in the newborn's contact with the mother and results in the late initiation of breastfeeding. It is unfortunate that the practice of standard post-delivery care is widespread in hospitals all over Turkey. When it is considered that about 97% of births in Turkey occur in hospitals,8 it is clear that improving the post-delivery care given to infants in hospitals will do much to promote breastfeeding. The current study was planned to determine the KMC effect on breastfeeding in healthy newborns in the early postpartum period. Of the four hypotheses, the first (H1) was that infants administered KMC start to breastfeed sooner, H2 was that they breastfeed more frequently, H3 was that they breastfeed for longer periods, and H4 was they they are more successful at breastfeeding than infants receiving standard postpartum care (SPC). 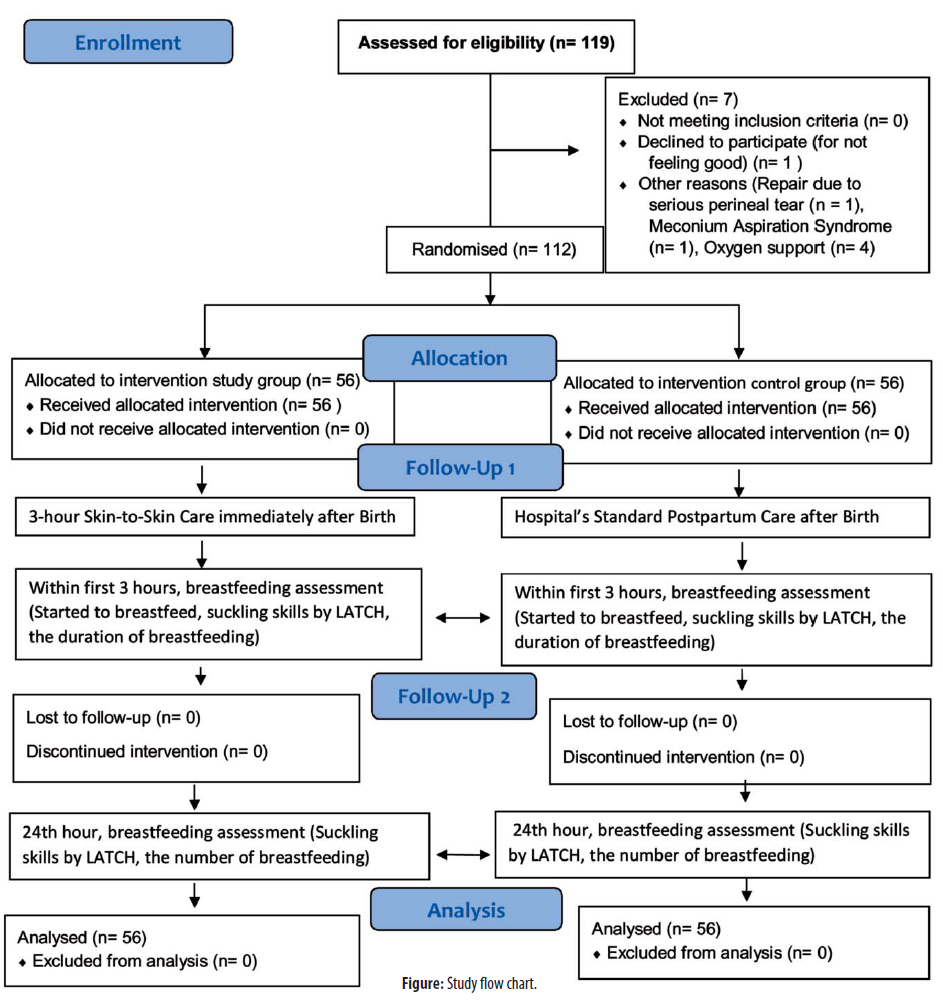 Data was analysed using the Number Cruncher Statistical System (NCSS) 2007. Besides descriptive statistics, like means, standard deviation, median, frequency and percentages, Shapiro-Wilk test and box plot graphs were employed in testing normality. Independent samples t test was used to analyse the two groups of quantitative data displaying normal distribution, such as the newborns' weight, height, head circumference, number of breastfeedings received, mother's age. Mann-Whitney U test was used in the case of variables not showing normal distribution, such as the newborns' APGAR scores at Minutes 1 and 5, the first interaction of the mother with her infant, the first time of breastfeeding, the number of breastfeedings in the first 3 hours and their duration. The comparison of qualitative data such as the infants' gender, the mother's educational status, the status of being breastfed in the first half-hour and hour was undertaken with Pearson's chi-square test, while Fisher's exact test was used to compare the mothers' eagerness to breastfeed. The results were analyzed at a confidence interval (CI) of 95% with significance expressed at p<0.05.

There were 112 sets of newborns and their mothers; 56 (50%) in each of the two groups. There was no significant difference in baseline characteristics, like mother's age, educational status, newborn's gender, birthweight, or Minute 1 APGAR (p>0.05) (Table-1). 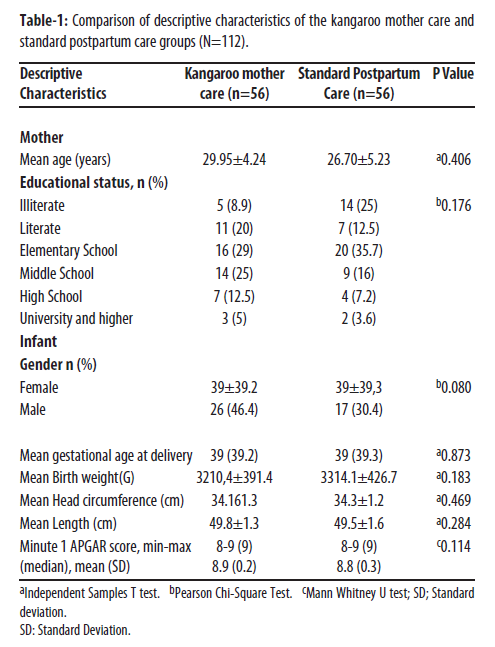 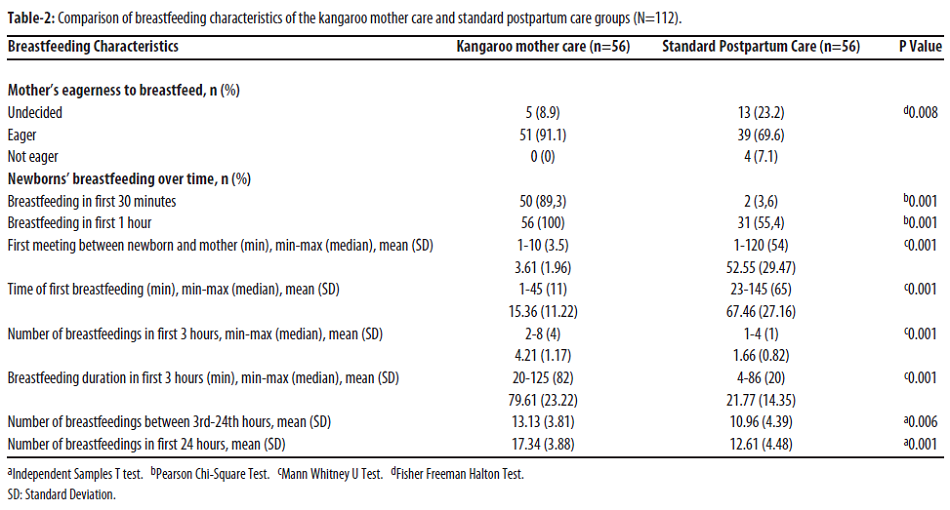 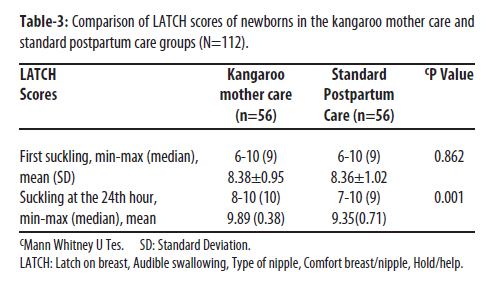 Mother's age, educational status, baby's gestational week, birthweight and other characteristics have an effect on breastfeeding.13 The results of the current study indicated that the characteristics that can affect breastfeeding were similar in both KMC and SPC groups. A study in Turkey reported that SPC delays the meeting of mothers and their infants after birth and consequently leads to the late initiation of breastfeeding.3 Such findings make it clear that postpartum care practices must be reviewed in the country. The results of the current study demonstrated that babies given KMC were exposed to their mothers sooner than newborns receiving SPC, started breastfeeding earlier, had higher rates of breastfeeding in the first 30 minutes, and that all KMC infants had breastfeed within 1 hour. The results confirm the H1 hypothesis and is consistent with literature.7,14-17 It might be recommended that midwives and nurses who provide breastfeeding guidance must be made more aware of KMC so that they may create opportunities to apply KMC to newborns with the aim of promoting breastfeeding. It is known that frequently breastfeeding a baby increases the flow of mother's milk.18 The number of breastfeedings KMC newborns achieved between the first 3-24 hours was more than SPC newborns, confirming the H2 hypothesis. Besides an infant's ability to suckle effectively, the duration of breastfeeding plays an important role in the success of breastfeeding.19 By administering KMC to the newborns for 3 hours, the current study was able to determine how many times they suckled. It was observed that the breastfeeding duration of KMC newborns was longer than the breastfeeding duration of SPC newborns, confirming the H3 hypothesis. A review of the literature revealed only a single study that measured the effect of KMC on the duration of breastfeeding. The randomised controlled trial (RCT) with 92 primiparae and their term newborns, applied KMC for approximately 2 hours and looked into the effect of KMC on the duration of the first breastfeeding. It found that the KMC newborns had a longer initial breastfeeding.19 The results of the current study, we believe, will make a significant contribution to literature as it is the first study to demonstrate that KMC causes infants to breastfeed more frequently and for longer periods. Effective emptying of the breasts plays an important role in the production of milk. And for the breasts to empty effectively, the baby must be breastfeeding effectively.20 The current study did not find a difference in newborns' initial breastfeeding skills, but the KMC group had significantly better breastfeeding skills in the 24th hour, confirming the H4 hypothesis. Another study used LATCH to assess the breastfeeding success of term newborns exposed to KMC immediately after birth for 45-60 minutes.17 It found that KMC babies had higher LATCH scores. In several studies using the Infant Breastfeeding Assessment Tool (IBFAT) to evaluate the effect of KMC on breastfeeding success,5,7,21 it was reported, similar to our results, that newborns given KMC had better suckling skills. The strength of the current study is its pioneering finding that immediate KMC post-birth meant longer breastfeeding duration. The current study has some limitations as well. The first is the possibility of a minimal influence on the study outcome because of the overly curious attitudes of healthcare professionals who might have found the practice of KMC novel and interesting. To reduce this limitation, the study groups were randomly selected and the healthcare personnel did not participate in the evaluation process. Another limitation was that the effect of KMC on breastfeeding was observed over 24 hours. This was because the average hospital stay of normal births in the study hospital is 24 hours. Due to limited research opportunities, we could not have a longer follow-up for the period after discharge. There is a need for longer follow-ups to determine the long-term effects of KMC. Thirdly, because of the limited facilities available to the unit, the research could not be conducted as a blind study. To minimise this, the infants' APGAR scores, vital signs and other parameters were obtained from their medical files, and the researcher assessed the breastfeeding skills of the infants with a valid and reliable inventory in the Turkish language.

The practice of KMC applied immediately after birth caused newborns to breastfeed sooner, more frequently and for longer periods, leading to improvement in their suckling skills.

Acknowledgement: We are grateful to the Scientific and Technological Research Council of Turkey (TUBITAK) for its valuable contribution.

Disclaimer: The text is based on a research thesis.

Source of Funding: The Scientific and Technological Research Council of Turkey (TUBITAK).